Last season, The Undefeated celebrated the Year of the Black Quarterback. I’m calling this coronavirus NFL season, the year of Cam Newton.

In a season of intriguing storylines — such as, will the league finish the season? — the most intriguing drama is unfolding in Foxborough, Massachusetts, where Newton is beginning his first season with the New England Patriots.

Would Newton tone down his act, tame his flamboyant outfits?

He came to the postgame news conference with a lime-green suit, same top hat, white shirt and black bow tie.

But what Newton did on the field reflected a potential cultural shift, in New England and throughout the NFL. Newton wore cleats with anti-racism phrases written on them, including “7 Shots,” a reference to the number of times Jacob Blake was shot by Kenosha, Wisconsin, police last month. Another message was the familiar “No justice, no peace.”

After Newton scored his first touchdown as a Patriot, he made the “Wakanda forever” gesture with his arms in the end zone. This was a touching tribute to Black Panther star Chadwick Boseman, who died last month at the age of 43.

I’ve felt uncomfortable all along with pro and college sports forging ahead, essentially rolling the dice with players’ lives to fulfill contractual obligations. Still, the silver lining of the NFL’s coronavirus season will be watching Newton replace Tom Brady and bringing living color to New England.

Newton sat out nearly two seasons with a multitude of injuries, then was cast off by the Carolina Panthers. It’s good to see him back precisely in these times of the Black quarterback explosion.

Newton, along with the Seattle Seahawks’ Russell Wilson, was a modern-day Pied Piper for young Black quarterbacks. They paved the way for them to be unapologetically athletic.

Because of injuries, Newton was forced to sit and watch the growth of Patrick Mahomes, who was voted league MVP in 2018 and led the Kansas City Chiefs to the Super Bowl in February. The Baltimore Ravens’ Lamar Jackson was named league MVP last season.

Hopefully healed, likely humbled and supercharged, Newton will take the stage. And his presence in New England symbolizes a potential cultural shift within the NFL.

A change of heart for Newton, too?

There have been symbols aplenty — in both the NBA and NFL, with arena and stadiums filled with Black Lives Matter messages. NFL players have been given the green light to put messages of defiance and inspiration on cleats and helmets. They have been allowed to kneel or stand or stay in their respective locker rooms during the playing of the national anthem.

All of this with no repercussions, no threats from team owners such as the Dallas Cowboys’ Jerry Jones, who in 2017 threatened to fire any player who dared kneel during the national anthem. Other team owners made similar threats in response to then-San Francisco 49ers quarterback Colin Kaepernick’s demonstration during the national anthem to protest police brutality in 2016.

The change of attitude was brought about this year by bloodshed against African Americans at the hands of police and vigilantes that inspired a backlash from all corners of society, including sports.

Newton, it seems, has also undergone a transformation. 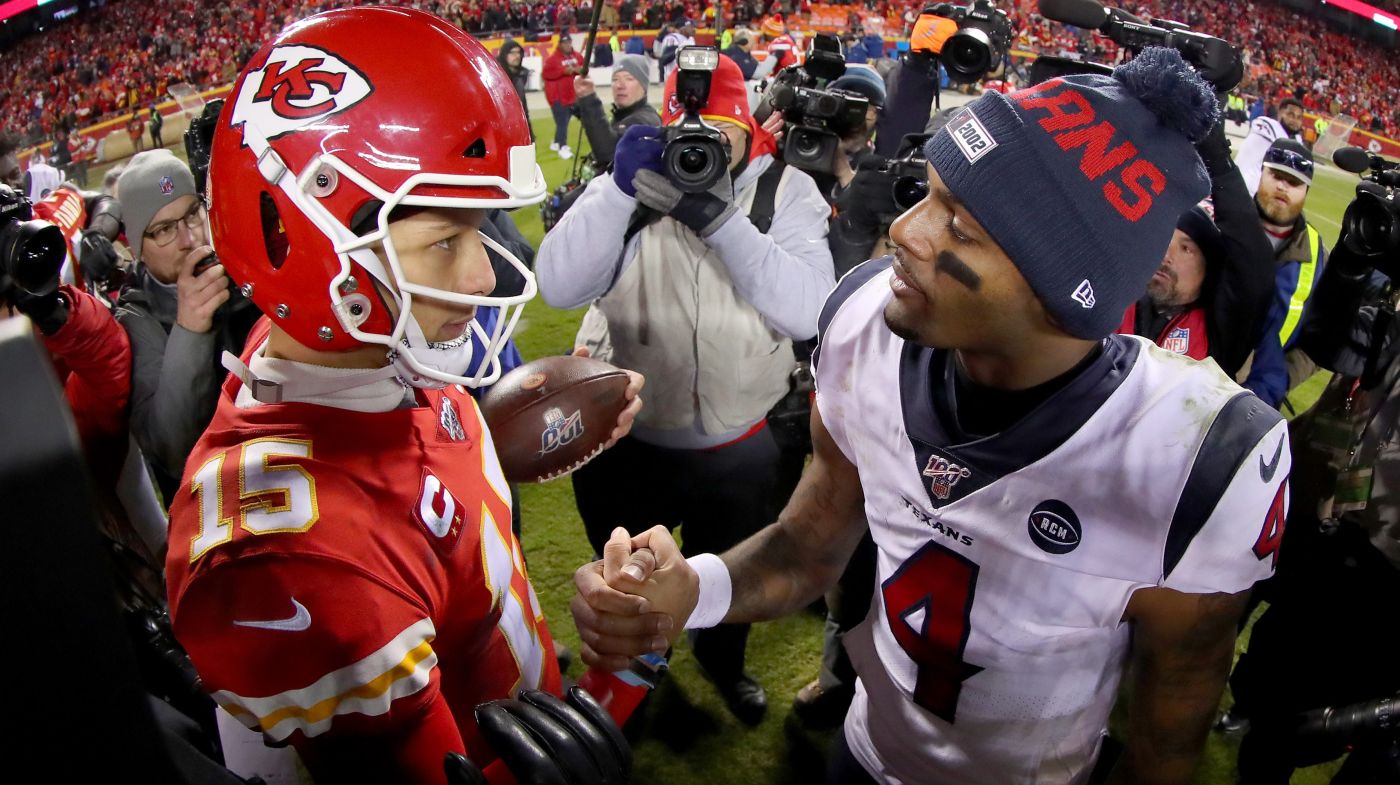 A year earlier, at Super Bowl 50, he made being a Black quarterback a central issue when he said: “I’m an African American quarterback that may scare a lot of people because they haven’t seen nothing that they can compare me to.” He suggested that the criticism of his exuberant style of play might be rooted in racism.

As a result, Newton suggested, he does not receive his due as a player: “I don’t think people have seen what I am or what I’m trying to do.”

In the coming weeks, Newton will visit a veritable quarterback Wakanda. The Patriots visit Wilson and the Seahawks in Seattle on Sunday. In Week 4, New England visits Mahomes and Kansas City; in Week 10, the Patriots will face Jackson and the Ravens. In Week 11, Newton takes on Deshaun Watson and the Houston Texans; in Week 12, the Patriots will host Kyler Murray and the Arizona Cardinals. Talk about being the victim of your success.

Yet, Newton seems to revel in the evolution of young Black quarterbacks and encouraged that they can be their authentic selves. During an interview last year, Newton told me that he reached out to Jackson.

“My thing has always been, ‘I’m not going to change.’ When I talk to Lamar, my main thing is, ‘Bro, do you. Be you, and that’s what a lot of people are afraid of, because when you’re comfortable with who you are, when you have that aura about yourself that nobody can really teach, that’s when you’re most dangerous.’ ”

Now the stage is set for a final act. Bring forth the drama.

Shortly after the Patriots’ victory over the Miami Dolphins, Newton got into a scuffle with some Dolphins players. After the game, Newton said the Miami players were trying to snatch a chain from his neck. Can you imagine Brady wearing a chain and then getting into it with opposing players who were trying to tear it off?

Provided that Newton stays healthy, this is going to be a great, wild ride in New England. An authentic adventure.

Cam Newton in New England, live and in color.