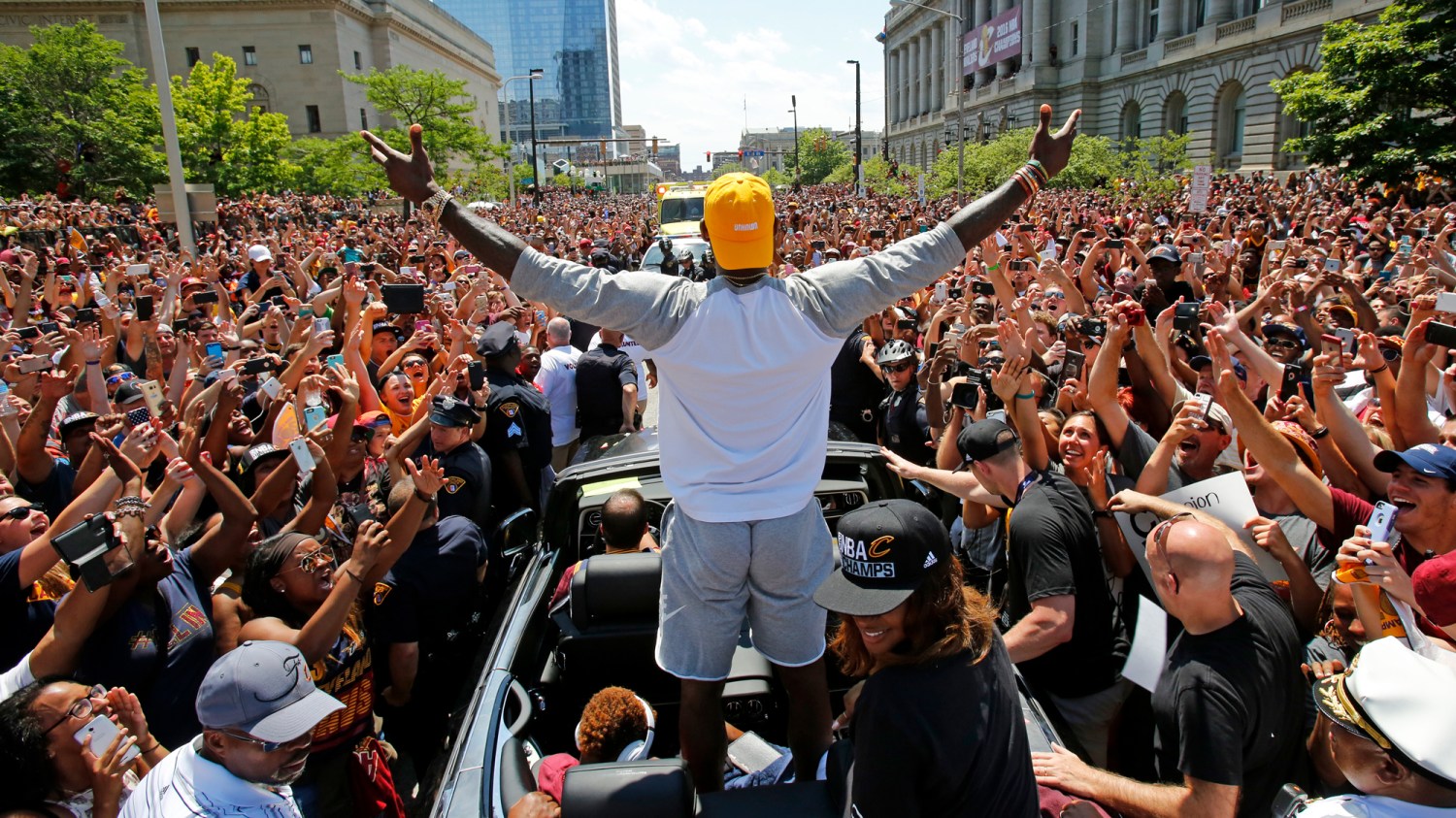 Cleveland Cavaliers’ LeBron James, center, stands in the back of a Rolls Royce as it makes its way through the crowd lining the parade route in downtown Cleveland, celebrating the basketball team’s NBA championship. Since the moment superstar LeBron James and the Cavaliers clinched the NBA championship with an historic comeback to quench the city’s 52-year professional title drought, Cleveland has been celebrating like never before. AP Photo/Gene J. Puskar
2017 NBA Playoffs

Can LeBron James lead the Cavaliers back to the promised land?

Cleveland has faith in its star and his story

CLEVELAND — After being down two games to 0 and three games to one a year ago, there is no crisis of the soul here, “no dark cloud of fear and trepidation hanging over the city,” says Pastor Jerry Birch. “We’re just as excited as ever. We have infinite hope.”

After all, they have LeBron James, who, along with his proud Cleveland Cavaliers teammates, will not be turning the other cheek Wednesday night in Game 3 of the NBA Finals.

Ever since a 17-year-old wunderkind posed for a Sports Illustrated magazine cover shoot titled “The Chosen One,” outsized hopes and biblical connotations have trailed James. “King James” soon became part of the NBA lexicon, and Nike unveiled an ad campaign 10 years ago simply called Witness.

Hell – sorry — heck, even local clergy referred to his return to Northeast Ohio in the summer of 2014 (from the opulence and materialism of the pretty people in Miami) as “The Second Coming.”

So it’s not outlandish to ask, as James attempts to resurrect the Cavaliers’ hopes of defending their lone NBA title, how much one basketball player can lift the spirits of a major American city that yearns for better days. And how do you quantify such things?

“Savior?” Birch said rhetorically. “That’s a little much. But the idea of redemption? You can make a case for that. It means to buy back what was lost. He redeemed his lost equity from the fans. By leading Cleveland to its first major sports title of any kind in 52 years, LeBron redeemed the city from a losing mentality.”

Antonio Branch, 57, an Uber driver and longtime Clevelander, sees James as representing a different element of Christian theology. “He is the city. He. Is. The. City. It’s as simple as that. LeBron is the beacon for this city. I would consider him the top ornament of Cleveland’s Christmas tree.”

Birch has a foot in both worlds. At 66, he’s an old-head Cleveland sports fan. He’s also been chaplain for the Cleveland Cavaliers for 18 years and is co-pastor of Abundant Grace Fellowship church in nearby Solon, Ohio. The ecumenical themes surrounding James are not lost on him.

“His whole return [to Cleveland] kind of smacks of confession, repentance and redemption,” Birch said as we spoke recently on the veranda of a restaurant in Independence, Ohio, a half-mile from the Cavaliers’ practice facility.

“Because you can’t have redemption without, biblically speaking, confession. God cannot buy back your soul until you confess and repent. Repenting is turning from your sin and walking toward God. Eventually, like a magnet pointing north, we walk away from that and move toward God.”

In this parable, Miami might as well be Hades. And Miami Heat president Pat Riley …

Look, James repented and then some for The Decision, the 2010 made-for-TV breakup with the scorned team owner, fans and the organization that drafted him out of St. Vincent-St. Mary High School in nearby Akron in 2003. Joining the Miami Heat, hearing him say he was taking his talents to South Beach, however beautiful and balmy, was blasphemy in Greater Cleveland.

But coming back home, saying all the right things about his reasons for returning, and then delivering the ultimate prize within just two seasons — well, you saw the parade.

“Cleveland … is one of the most segregated cities in America,” Birch said. “Even the Eastern Europeans. You got Slovenians over here, Polish over here. But … in Cleveland last summer, it was a love fest, an absolute coming together of all races, creeds, religions and nationalities,” the pastor added. “People hugging, celebrating this great moment as one. I’ve never seen anything like it.”

Added Tom Petersburg, 68, who was the chaplain for the city’s pro teams — the Browns, Indians and Cavaliers — through much of the desolate 1980s and 1990s: “I don’t know if there is a direct spiritual correlation, but people in Cleveland felt very good about finally winning a title last year. The media had given it such a bad rep as the town of teams that just couldn’t win the big one. And, all of a sudden, they did it.”

Of course, James is not the first sports star to evoke messianic comparisons. It’s a cliché dating to Rome and the Colosseum, where the lions were said to have compiled an unblemished record against the Christians.

In his autobiography Giant Steps, Kareem Abdul-Jabbar recalled a time in 1966 when a gangly Philadelphia teen came to Rucker Park in Harlem with his team — and two busloads of worshippers who came to see him play.

There was a “continuous wail that seemed to be coming from everywhere,” Abdul-Jabbar wrote.

In a similar vein, Robert Griffin III, before he fell off the NFL radar, wasn’t merely an exhilarating rookie quarterback in 2010: He was “The One” who would take Washington back, not to the Super Bowl but to “The Promised Land.”

It should come as no surprise then that Birch has no difficulty bridging the story of Jesus and professional athletics.

“People forget this, but Jesus wasn’t a punk,” he said. “He wasn’t some blond-haired, blue-eyed sissy, all soft. He was a carpenter. They didn’t have Black & Decker. All he did was chop, saw, lift, nail. I’m sure he had some pecs and biceps.

“If Jesus was in the NBA during [Charles] Barkley’s day, he would have beat the crap out of Barkley, held him scoreless and then helped him off the floor, shook his hand and smiled. Wouldn’t be anything pejorative about it. He’d just be doing his job.”

LeBron-onomics is much easier to quantify than, say, how much impact King James, the Revised Version, has had spiritually on a community. The Cavaliers sold out the Quicken Loans Arena just five times in 2014, the season before James’ return to Cleveland. Since his return, they have sold out The Q for every regular-season game (123) and the three playoff runs to the NBA Finals.

And yet, walk around downtown and beyond now and it feels like a different sports town, as the place known for woebegone losers, saddled with the Browns’ playoff woes — recall “The Drive” and “The Fumble” — and Michael Jordan hitting “The Shot” over Craig Ehlo, has now begun to experience a pleasant identity crisis.

On Sunday, Birch gave a sermon at his church titled “Don’t Give In, Don’t Give Out & Don’t Give Up!” In illustrating the difference between endurance and perseverance, he used the Cavs’ Game 1 loss last Thursday and linked it to biblical verses — among them 2 Corinthians 4:16: “Therefore we do not lose heart. Though outwardly we are wasting away, yet inwardly we are being renewed day by day.”

Losing Game 1, Birch said, was like taking an overhand right in a prizefight. He raised his fists and alluded to three of history’s most violent rounds of boxing, a 1985 middleweight bloodletting between Thomas Hearns and Marvin Hagler that ended with Hagler dropping a spaghetti-legged Hearns and scoring a devastating knockout.

Birch has been the full-time chaplain for the Cavs since the 1999-2000 season. He gives a small sermon before home games and often counsels players privately about relationships and other personal issues. James doesn’t attend the pregame chapel, which Birch says he has never used as a gauge for Christian authenticity anyway. Outside of a quote referring to injured teammates two years ago — “When you get your guys back, you prepare just as you prepare before. There’s only one guy ever in the world that everything will be all right when he comes back, and that’s Jesus Christ” — James has kept his spiritual life personal.

But his philanthropy is well-known, including partnering in 2015 with the University of Akron to provide a guaranteed four-year scholarship to the school for qualified students in James’ I Promise program.

“I don’t know LeBron, but I know he gives back in many ways,” said Petersburg, the former chaplain. “And what I’ve found over the years is the lasting impact of an athlete to a child or any fan is not what he did as a player but how he gave back to the community he played in after he stopped playing. That’s where the impact is really felt.”

Birch believes that James’ influence goes beyond his charitable endeavors. Marrying the woman who bore his children, Savannah James, set a “moral example,” he said, “in a world where men leave a trail of unwed mothers.”

Birch and his wife, Gail, do marriage counseling through their church. He doesn’t subscribe to the belief that God has decided who will win the Finals. But, he added, “God doesn’t waste anything. God didn’t even waste my adultery. He took the darkest days of my life and used them to help build me into the man I am today.”

A former psychology major who saw Martin Luther King Jr. twice in person, Birch cautions against making any direct correlation between James and personal salvation, but the perseverance part of James’ story carries applicable lessons for everyone.

“I can only imagine what it is to walk in his shoes. He’s done it so well for so long from the beginning. It’s a simple idea, but you can’t learn to persevere without persevering.

“You’ve got to stay in the fire, stay in the furnace. You have to embrace it. Let the refining fire do its work. Does LeBron do that? Since the age of 8, the age he left the front porch in the projects of Akron.

Winning another gaudy gold ball is clearly one of James’ goals, as is supplanting Jordan, perceptionwise, as the greatest player in the game’s annals.

The pastor got quiet and then added, “Thing is, LeBron knows what’s more important are his wife, his children and the kind of impact you can have with the advantages you’ve been given.”

In his open letter in Sports Illustrated announcing his return to Cleveland, James wrote, “I feel my calling here goes above basketball. I have a responsibility to lead, in more ways than one, and I take that very seriously. My presence can make a difference in Miami, but I think it can mean more where I’m from.”

It’s why Birch has no problem calling that “The Second Coming.”

“We use prodigal wrong all the time — it actually means to be very wasteful,” the pastor said. “LeBron is not a prodigal son. He didn’t waste anything. The equity that he lost when he left, he’s more than earned that tenfold in his return.”