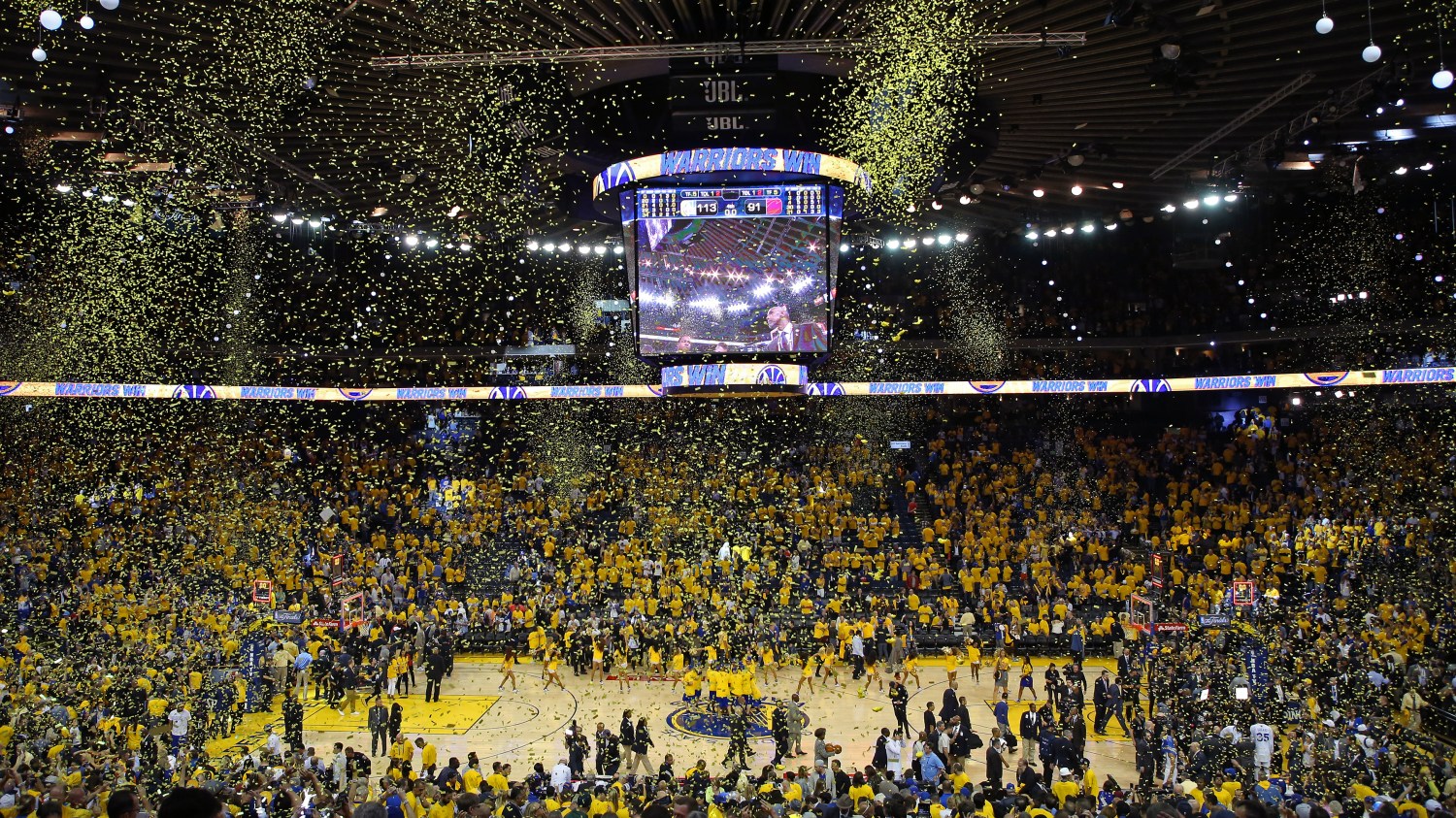 Confetti falls on the court after the Golden State Warriors win Game One of the 2017 NBA Finals against the Cleveland Cavaliers on June 1, 2017 at Oracle Arena in Oakland, California. Joe Murphy/NBAE via Getty Images
2017 NBA Playoffs

Analysts wonder how LeBron can rescue them from certain annihilation

OAKLAND, California — This being Overreaction Friday at the NBA Finals, we don’t understand why they’re even playing the next three or four games. Can a series be called after one game? Everyone knows it’s time to put a fork in the Cleveland Cavaliers.

This isn’t some half-baked, we-so-need-your-clicks take, either. I mean, we do need your clicks. But actual NBA experts are saying this too:

Here’s a sampling from the chorus of voices after Game 1 Thursday night in Oakland, where Kevin Durant crushed the dunk contest and the Golden State Warriors would have won by 40 — if they hadn’t missed 28 shots inside the paint.

“Because this is what happens in Game 4: The Warriors are pissed off, they win, get that game,” Scott said. “Then they go home and close it out. You know why? Nightmare. People knocking on your door, talking about 2016. ‘Hey, you were here last year, 3-1, remember.’ Nope. Get it over with. Done.”

“I had Golden State in six, but I don’t know anymore.”

“Cleveland needs Golden State to go cold in stretches, and I don’t see that happening. Because at some point Klay Thompson is going to get that roll. Then Draymond starts making shots, and K.D. and Steph are already playing out of their minds. When all that happens, I don’t see it, bro. I mean, LeBron had 28 [points] and 15 [rebounds] tonight. What does he need, 40 and 30?”

Barry was a little more hopeful. Sort of.

Now, if you’re from Cleveland, you realize that LeBron James has the Warriors right where he wants them. Once he brilliantly lets the Warriors blow the Cavs out in Game 2 and eventually connives his way toward another 3-1 deficit, the trap has been sprung and the Warriors will psychologically crumble until Stephen Curry chucks his mouthpiece toward the heavens. Cavs in seven. Again.

Whatever the case, the hyperbole is flowing more freely here than Golden State’s offense. If we were to say that Game 1 has absolutely no bearing on Game 2, that adjustments will be made, that Cleveland won’t turn the ball over 20 times again, nor will the Cavaliers privately escort Durant to the rim for six first-half dunks — well, that’s just too sensible and level-headed.

We need absolutes. Certainties, such as those of the German broadcast team of Andre Voigt and Dean Walle on DAZN – “The Zone” in Deutschland — who only booked reservations for five games.

Honest. Voigt and Walle are so sure they’re going home early that they aren’t even credentialed for Games 6 and 7.

“K.D. can create, which Harrison Barnes couldn’t last year,” Walle said. “I was so impressed with Kevin Durant. He was guarding Kyrie Irving for a while and doing a good job. Yes, the Warriors are very dominant.”

K.D., who normally looks like he weighs maybe 102 pounds, always looks hungry. But now he looks absolutely famished. He doesn’t have the eye of the tiger: He has the eye of the guy who killed and ate the tiger and then sold its pelt.

According to all the experts, when you break this series down analytically and really calibrate things, the Cavs never had a chance after last summer.

The Warriors went out and got the Slim Reaper, the second-best player in the game, a future Hall of Famer and the greatest natural scorer since George Gervin.

The Warriors have Andre Igoudala, Shaun Livingston and JaVale “Shaqtin’ a Jewel” McGee.

Igoudala can still ball well enough to start for 25 other teams in the league. Livingston is unfazed by anything, and McGee is on a mission not to be Shaquille O’Neal’s video foil anymore. That’s a combination of scoring, veteran leadership in the backcourt and a relatively young rim protector.

The Cavs have Richard Jefferson, Dahntay Jones, James Jones and Korver, all of whom have been carbon-dated. All age 36, they have combined for just under a thousand seasons of experience, which in NBA years means they are, like, old. Ty Lue doesn’t just go searching for reserves on the bench; he goes on archaeological digs. Methuselah now asks James Jones for anti-wrinkle cream.

Do we really need coaches for this series? Seriously? A physically ailing Steve Kerr gave up the reins to a guy the Cavaliers fired not once, but twice.

We’ll throw in some X’s and O’s here just to cover our bases:

Here’s what Scott thinks the Cavs need to do: “As much as we love LeBron and Kyrie, Ty Lue has to challenge them to share. People say, ‘What do you mean by that?’ Well, when you get into your one-on-one stuff, everybody is standin’ there watchin’. When you don’t score, Golden State is going down for a 3 or … ball movement, layup. K.D. dunk. Steph Curry layup. As much as I love Kyrie, they have to get a better flow in their offense.”

And here’s Butler on the Cavs’ defense: “Cleveland never made the back-end defensive adjustments at the end of the season before the playoffs. They never addressed it. They ran into Indiana and Toronto and Boston, and they were able to dominate them. Now you’re facing the best in the West.

“If you’re Cleveland, you gotta think you had problems with this team last year. And Draymond Green had to sit for Game 5. But now you add a component like Kevin Durant. Now, LeBron can’t rest on defense. Not one possession. That matchup between LeBron and K.D. is now a wash. He’s the second-best player in the world. He can go at LeBron and get him in foul trouble. You can’t leave him. LeBron now has to be on red alert at all time when he’s guarding him.”

Now, let’s get back to being Chicken Little. It’s time to put our hands together for the Eastern Conference champions and congratulate them on a good season before their abject humiliation the next three or four games. They had a cute little season last year, ending a five-decade championship drought in Cleveland and throwing a parade for the ages.

But the gaudy, gold trophy is going back to Oakland. Good luck, Cleveland. And good night.