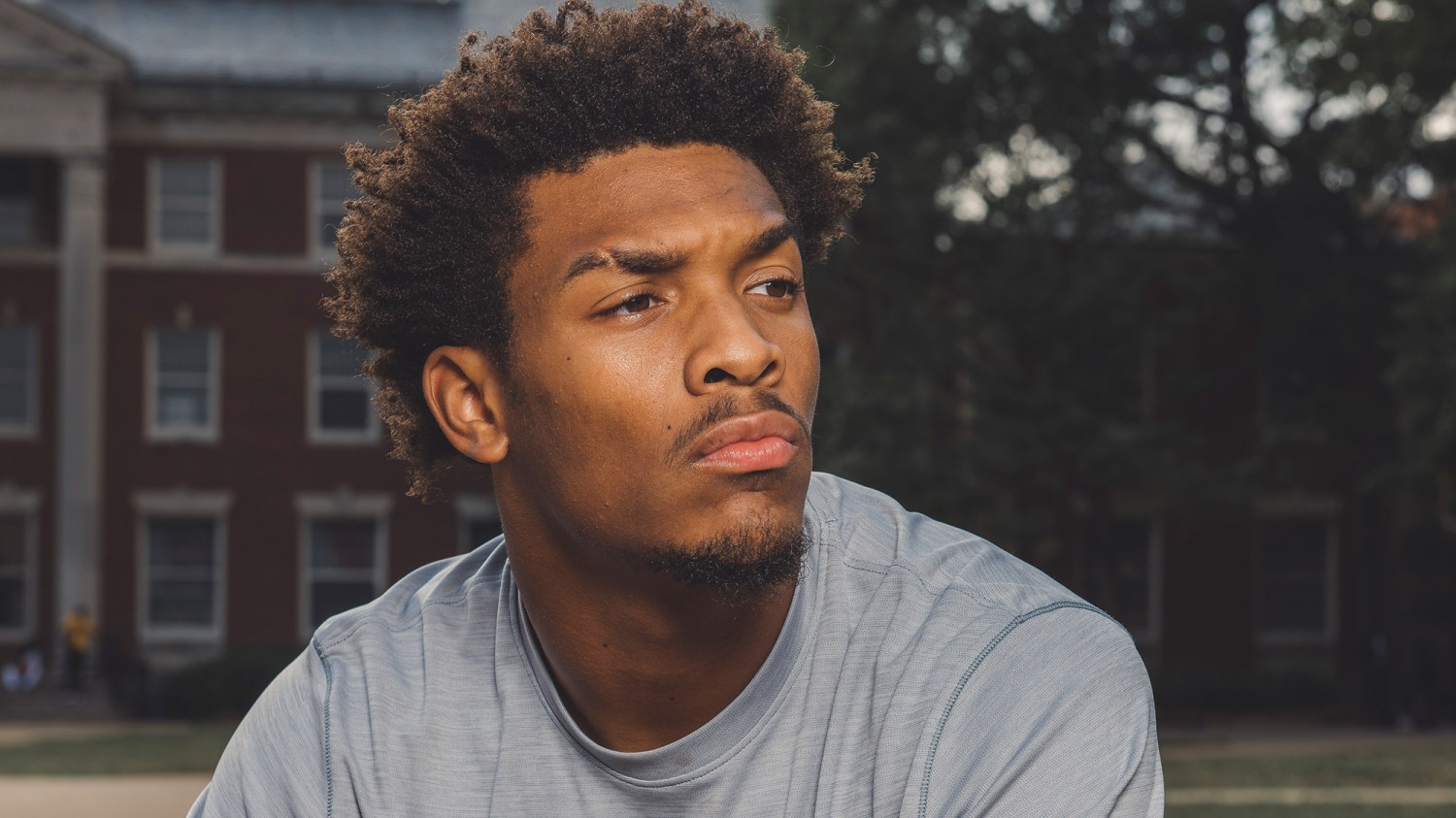 Former Howard University quarterback Caylin Newton on The Yard on campus in Washington on Oct. 3. Newton has said he intends to transfer after he graduates in May. He will have two years of NCAA eligibility remaining after redshirting this season. Jared Soares for The Undefeated
HBCU Football

When the highly anticipated football game between Howard University and Harvard kicks off on Saturday, Caylin Newton expects to settle down in front of a television to watch.

For Newton, who was expected to be a main attraction for the game, that will be slightly awkward.

“I have guys on that team I consider to be brothers, and my body is used to playing on Saturdays,” Newton said. “Going into this season, I wouldn’t have imagined being in this moment. This is all a surprise.”

This is the decision to enter the college football transfer portal, thus putting an end to one of the most highly decorated football careers in recent memory at Howard.

That career came to a halt a week ago when he notified the school that he would not be suiting up for the Sept. 28 game against Bethune-Cookman, which led to speculation that he would transfer. That was confirmed Tuesday with Newton announcing, via Twitter, that he was entering the NCAA transfer portal.

An hour after posting that tweet, Newton sat down with The Undefeated to discuss his decision to leave Howard, what he expects in his college football destination and his life at a historically black university.

“I arrived at this university a boy and I’m leaving a man, and Howard University developed me,” Newton said. “I’ve met so many lifelong friends and brothers on the team, and so many powerful and influential people. Coming to Howard was one of the best decisions I’ve ever made in my life, and I wouldn’t trade this life-changing experience for anything in the world.”

Newton sharing his thoughts on an experience that has been so impactful on his life leads to this question about his departure:

Newton’s father, Cecil, did his best to answer that question.

“We didn’t start the season with the intent to redshirt him,” Cecil Newton said. “After a long pause and a lot of meditation, and some circumstances that are not to be discussed, we decided it was best for him to consider taking a new direction.”

The Newtons wouldn’t get into the circumstances. But Newton’s announcement that he was leaving Howard came on the same day that three other players announced their departure: sophomore running back Khalid Dorsey (who played in three games this season after averaging 6.2 yards per carry as a freshman), freshman defensive back John Smith VI and sophomore linebacker Iggy Reynoso.

On the same day those defections were announced, there was a story published by HBCU Gameday that included allegations of verbal abuse and intimidation of players by first-year Howard football coach Ron Prince. When Kery Davis, the athletic director at Howard, was asked about those allegations, he referred The Undefeated to a statement issued by the school:

“Howard University does not tolerate verbal abuse or threats of any kind. The safety and well-being of our students is of paramount importance and always our number one priority. We are taking swift action to understand and investigate the allegations pertaining to the treatment of student-athletes on the football team.”

Prince, who was hired last December after a season of working as an offensive analyst at Michigan, was asked during a weekly conference call about Newton’s decision to sit out last weekend.

“These young people have the right to manage their careers as they see fit. We respect that, and that’s where we are,” Prince said. “Caylin’s an outstanding young man with outstanding talent. We’ll leave it at that.”

What Howard is left with is trying to fill the hole left by a player who in 2017 engineered the biggest point-spread upset in college football history in Howard’s historic 43-40 win at UNLV.

At a time when there have been increasing debates over whether high-profile African American athletes should consider attending historically black colleges and universities (HBCUs), Newton is the latest among several high-profile departures from Howard:

Davis was asked whether there’s concern about talented players transferring from Howard.

“Our student-athletes benefit from a rich academic, cultural, social and athletic experience,” Davis said. “Eighty-two percent of our athletes graduate from the university. We are very confident that we will continue to attract top-tier athletes in the future.”

That’s true, with the recent news that two blue-chip basketball players will visit Howard. Josh Christopher, a guard ranked 12th in the ESPN 100, announced he’ll be on Howard’s campus for a visit this weekend and Makur Maker, a 6-foot-11 center who’s ranked 10th by ESPN, will visit Howard during homecoming weekend.

Newton, whose father and brother played football at HBCUs, was asked by The Undefeated whether black colleges are a viable option for top athletes.

“You have to pick the opportunity that’s best for you, and sometimes that’s not being a talented guy who goes to a major school and winds up wasting years on the bench while he can be playing somewhere else.” — Caylin Newton

“Not a lot of people know this, but I came to Howard as a walk-on and had to earn my scholarship, and this school provided me a great opportunity,” Newton said. “But the differences between HBCUs and those Power 5 schools are drastic. You can have success at an HBCU, but you basically have to fight a big-boy fight with a short stick.”

Newton’s father weighed in on whether major athletes should consider HBCUs.

“All those guys who decide to attend Ohio State, Michigan, Penn State, Alabama, you can’t expect them to turn down a program where the sports budget is close to $100 million to go to a place where the budget is a fraction of that,” said Cecil Newton, who played college football at Savannah State. “I love HBCUs, and that’s why I chose for my son to play at Howard. But let’s be realistic. The schools don’t have the money and, therefore, they can’t compete on that level.”

While it’s difficult for HBCUs, from a financial standpoint, to compete with major schools, Newton said his success should demonstrate that they should be considered by some players.

“You have to pick the opportunity that’s best for you, and sometimes that’s not being a talented guy who goes to a major school and winds up wasting years on the bench while he can be playing somewhere else,” Newton said. “Coming to Howard, who could have dreamed we would beat UNLV? In our league, North Carolina A&T is always among the top-ranked teams, and a lot of HBCUs put guys in the league on a regular basis. You really have to pick a school and a team that’s best for you.”

So what criteria will Newton use to make his decision?

“I know football’s not going to last forever, so I want to be in a situation where I’m going to get the best education,” said Newton, who is majoring in sports management and will consider studying divinity as a graduate student. “While I’m playing football, I want to be able to compete at the highest level and compete for a championship.”

That, clearly, wasn’t going to happen this year at Howard, as the Bison opened the season with a 79-0 loss at Maryland. Coming off the 37-29 home loss to Bethune-Cookman, Howard’s first game without Newton, the Bison enter Saturday’s game at Harvard with a 1-4 record.

After deciding not to play in the Bethune-Cookman game, Newton traveled home to Georgia, where he watched the game on television with his family.

“It was tough because on Saturdays my body is used to playing, and last week wasn’t the case,” Newton said. “I felt my spirit was there. I felt the ups and downs of the game, and I was really rooting for the freshman starting [quarterback Quinton Williams] because I remember being in his shoes.”

Newton didn’t quite know what to expect when he arrived back on campus in time to attend classes on Monday.

“I wouldn’t say I was nervous, but I didn’t want it to feel like I had let people down,” Newton said. “But as I’ve spoken to a lot of former players and my teammates, that gave me clarity that I can live with my decision. They gave me their feedback, and if they can approve my decision then I’m OK and I can sleep well at night.”

While both Newton and his father praised Howard president Wayne Frederick and athletic director Davis, neither would comment on the coaching staff.

“We have the utmost respect for Dr. Frederick and Mr. Davis,” Cecil Newton said. “They were obviously disappointed because Caylin was a breath of fresh air for Howard. His brother was an NFL MVP and he emerged as a star, so what better situation to compliment an HBCU.

“Our decision is not an indictment of Howard. I want to go on the record that they have met and exceeded our expectations for academic college life.” — Cecil Newton

“Our decision is not an indictment of Howard. I want to go on the record that they have met and exceeded our expectations for academic college life.”

That academic journey will continue until the end of the school year. Newton is on schedule to graduate next spring in three years. For his athletic journey, Newton has no idea when he’ll decide on a new school.

“I’ll just keep working out and take this time to get into the best shape of my life,” Newton said. “When it comes time to decide on where I’ll go next, I’ll make the decision that’s best for me.”

On Saturday, Newton will experience his second straight game day without playing the sport he loves. He plans to watch Howard’s game at Harvard on television and follow the team throughout the rest of the season. But he doubts he will attend any of the three remaining home games.

“If I go to the game, it’s probably a lose-lose,” Newton said. “If I’m standing on the sideline, the camera’s on me, and if I’m sitting in the stands, the camera’s on me. I definitely will continue to be a supporter, but I don’t want to be a distraction.”