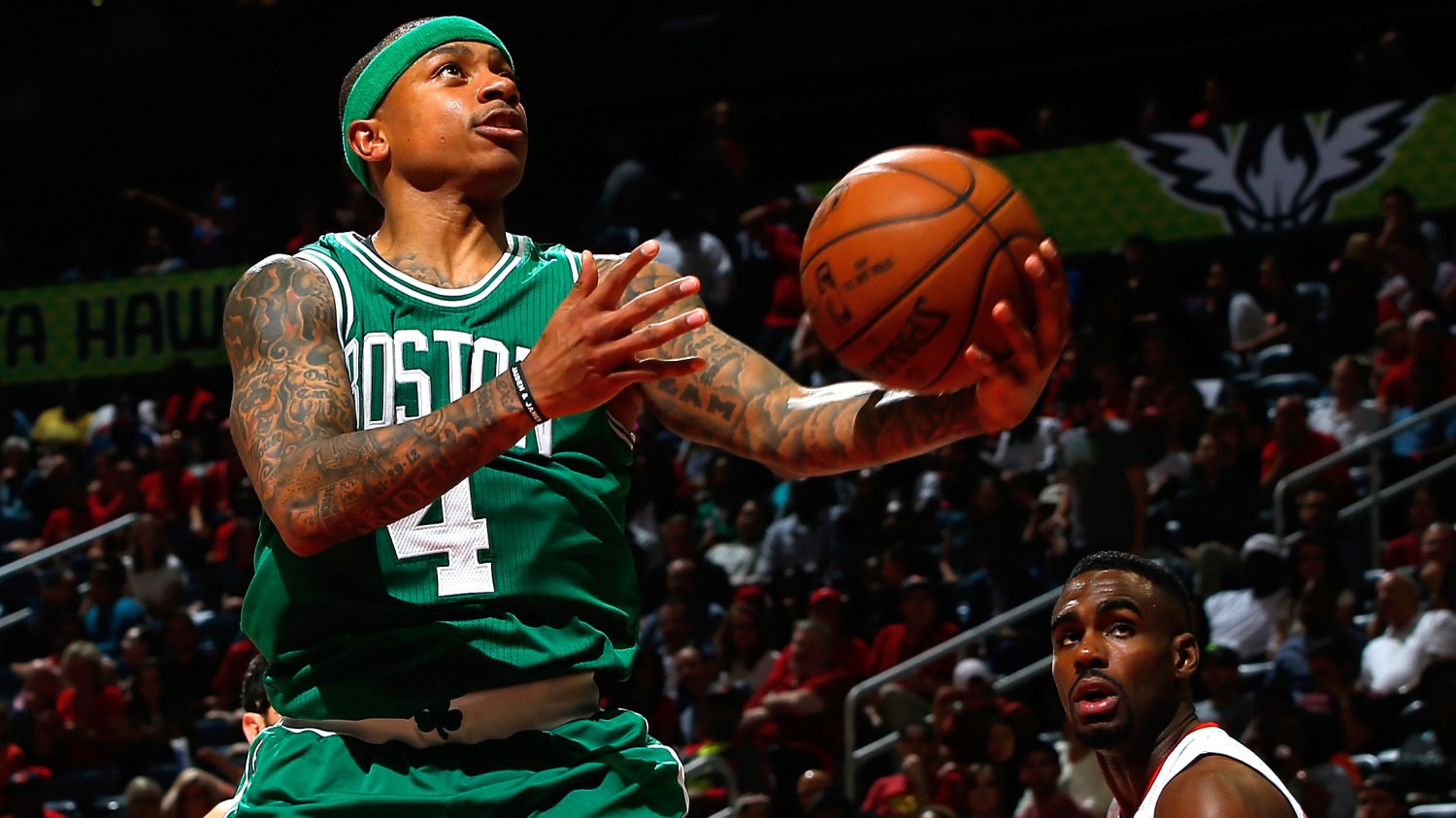 Isaiah Thomas #4 of the Boston Celtics lays in a basket against the Atlanta Hawks in Game Five of the Eastern Conference Quarterfinals during the 2016 NBA Playoffs at Philips Arena on April 26, 2016 in Atlanta, Georgia. Kevin C. Cox/Getty Images
NBA

The Celtics star talks overcoming struggles, keeping his confidence and using his height to his advantage

At just 5-feet-9, Thomas was the 60th and final pick of the 2011 NBA draft, and he had no summer league to showcase his game due to the NBA lockout that offseason. Now, six years, two trades and lots of skepticism and short jokes later, Thomas has parlayed his slim chance into blossoming Boston Celtics stardom and a two-time NBA All-Star appearance.

“All I wanted was a chance. That’s all I needed. I will take care of the rest because I prepared myself for that moment no matter if it was training camp or it was being the water boy. If I was going to be water boy, I was going to be the best water boy there was,” Thomas told The Undefeated.

Thomas is short in stature, but he stands tall among the NBA’s stars as one of the league’s top scorers and the face of the 17-time NBA champion Celtics. The 60th pick-turned-NBA All-Star recently talked to The Undefeated about his David vs. Goliath road to NBA success.

Where did you watch the 2011 NBA draft night?

I was in Seattle. I was actually at the University of Washington with a couple teammates and a couple close friends. We were at the gym. We weren’t watching the draft, but we were following it. I was waiting for my agent to call me. That was the longest day of my life. The longest day, just waiting, waiting and seeing names called before me.

What was going through your mind during the draft?

I kept believing. The Lakers had four picks in the second round and their last pick was 58. I forgot all about Sacramento being my first workout. I’m thinking, ‘I might not get drafted.’ That was the first time that possibility crossed my mind. And then two picks later during the 58th pick, my agent called me and said the Kings would pick me with the 60th pick.

Were you happy about Sacramento drafting you, or was it better to be an undrafted free agent?

I was happy because I always told myself that all I ever wanted was a chance. No matter if I was drafted first or last, I just wanted to get drafted because I knew if I got the opportunity, I would take advantage of it no matter what.

How challenging was it to make the Kings’ 2011-12 roster with no summer league?

I remember coming down to Sacramento once the lockout was over. I came out here a couple weeks after Tyreke [Evans] hit me up talking about, ‘Come down here and start working out.’ He got me a hotel. We were out here for a week or two before practice started and we were working out. Right before training camp started, I went into the office and signed that deal. But it wasn’t a lot. It was the [rookie] minimum at three years. But it was a blessing just to be able to sign a NBA contract. That was the point where I was saying, ‘Now, let’s go!’

We didn’t have summer league, so my back was against the wall from the jump. Sixtieth pick. Not having summer league to be able to showcase what I can do. I had to show everything I could do in training camp and you know they drafted Jimmer [Fredette] in the first round. They had to showcase him. And they drafted Tyler Honeycutt a couple picks before me. I had a small window, but when I did get my chance I had to be special every time.

I was picking them up [defensively] full court. I was doing everything I could. When I got my name called in practice, it was cutthroat. I had to be a killer. I had to fight for my job, literally, every day. Even when I wasn’t playing, practice was my game. That’s how I treated every practice. This is my time I can show these guys I can play.

How did you keep your confidence up?

Work. I worked hard. I knew when I did get my opportunity I would take advantage of it no matter what it was. There were times where my confidence got low, like, ‘Why is this happening?’ When those questions came in my head, I just went to the gym. The gym was the only thing that would let my mind be free and feel like everything was going to be all right. I just put work in. Every time my opportunity came, whether it was in practice, whether it was down by 20 in the fourth quarter with two minutes left, I was ready for that moment.

What stressed you the most during your rookie season?

I was just so worried about myself and just me showing I can play and compete every night no matter what. No matter if I’m the smallest guy out there. No matter what type of minutes I get. I was getting DNPs [Did Not Play — Coach’s Decisions]. I was not playing. I just always felt like I had to take advantage of the opportunity. So, mentally, it was tough, but I had to stay locked in or those opportunities when they came would go to someone else that was ready. But I was ready.

In July 2014, the Kings traded you to the Phoenix Suns for the rights to Alex Oriakhi, who never played in the NBA. How do you reflect back on that trade?

There were people writing articles saying this and that. It was obvious that they wanted the upgrade because every year they brought somebody in. They drafted Jimmer before me, so they had to give him a chance. My second year, they brought in Aaron Brooks. My third year, they brought in Greivis Vasquez. I always had to take a seat back, but at the end of the [season] I was starting once I won that battle. Every year. When I was a free agent, they ended up signing Darren Collison first. That was a sign right there that I had to go somewhere else.

What were your darkest days in the NBA?

Just getting DNPs. I went through that my first two years. Not playing. I remember talking to my wife after I came back home. I would say, ‘I should be playing.’ I would always complain to her. She said, ‘Be happy that you are in the NBA.’ Ever since that day she knew that wasn’t the right thing to say. It wasn’t about that. I can play at this level and at a high level.

How did your career change to stardom in Boston after being traded by the Suns on Feb. 9, 2015, for guard Marcus Thornton and a 2016 first-round pick?

What were your thoughts about being dealt to Boston?

When I got traded, I didn’t want to go because even though the Phoenix thing didn’t work out, we were seventh or eighth in the West. We were fighting for a playoff spot. Boston had traded [Rajon] Rondo, they traded Jeff Green, they traded so many players. It was rebuilding time. So when I got traded there, ‘Damn, I got to go to another team that’s rebuilding at the end of their conference.’ Then when I checked, they were a game out of the playoffs.

[Hall of Famer] Isiah Thomas called me that day and said, ‘You guys are a game and a half out of the eighth spot. Take this team to the playoffs.’ That’s when it started changing a little bit to me. ‘Maybe I can see the playoffs for the first time in my career.’

Did you have any preconceived notions about the city of Boston?

No. It was in the East, so that was different. I was going to the cold. In Phoenix, I didn’t even have a winter jacket. When I got to Boston, it was completely different. But the city was all love from the day I got there. Just the weather sucks.

What is it like playing in front of the Celtics crowd and being part of a historic franchise?

I just took advantage of the opportunity. Stay in the moment. Sometimes I sit back and say, ‘I play for the Celtics. It doesn’t make no sense.’

What does being an NBA All-Star for the second time mean to you?

I came a long way. Those were goals I always had in my head that if I would have told somebody they would have basically laughed at me. But getting the opportunity to be a ‘franchise guy’ and getting the keys to the team, I could play at this level. I always believed in myself and believed that something like this short height by NBA standards could be a blessing in disguise.

I look at it as a blessing. I’ve always been small. I feel like I got the advantage. This might not sound right, but I use my height to my advantage.

What advice would you give somebody who was told he or she is too small?

How would you now describe your road to stardom?

A dream come true. To all those people that said, ‘He’s a spark plug off the bench, a sixth man at best, a volume scorer who can’t play defense … he can’t translate his game to the NBA … what he is doing in college won’t work … ’ — all that went through my head. I am going to keep going. I am going to make everybody eat their words. They didn’t want to give me my just due. That’s what keeps pushing me till this day.

What can people learn from your story?

Just don’t give up. Don’t give up, no matter what circumstances you’re in, no matter what situation. You can go a long way with believing in yourself, putting the work in, hard work and dedication. All of those things. Believing in God and keeping it faithful will take it a long way. Every step of the way I know what I am capable of doing. So I am always ready for every opportunity because I prepare myself.