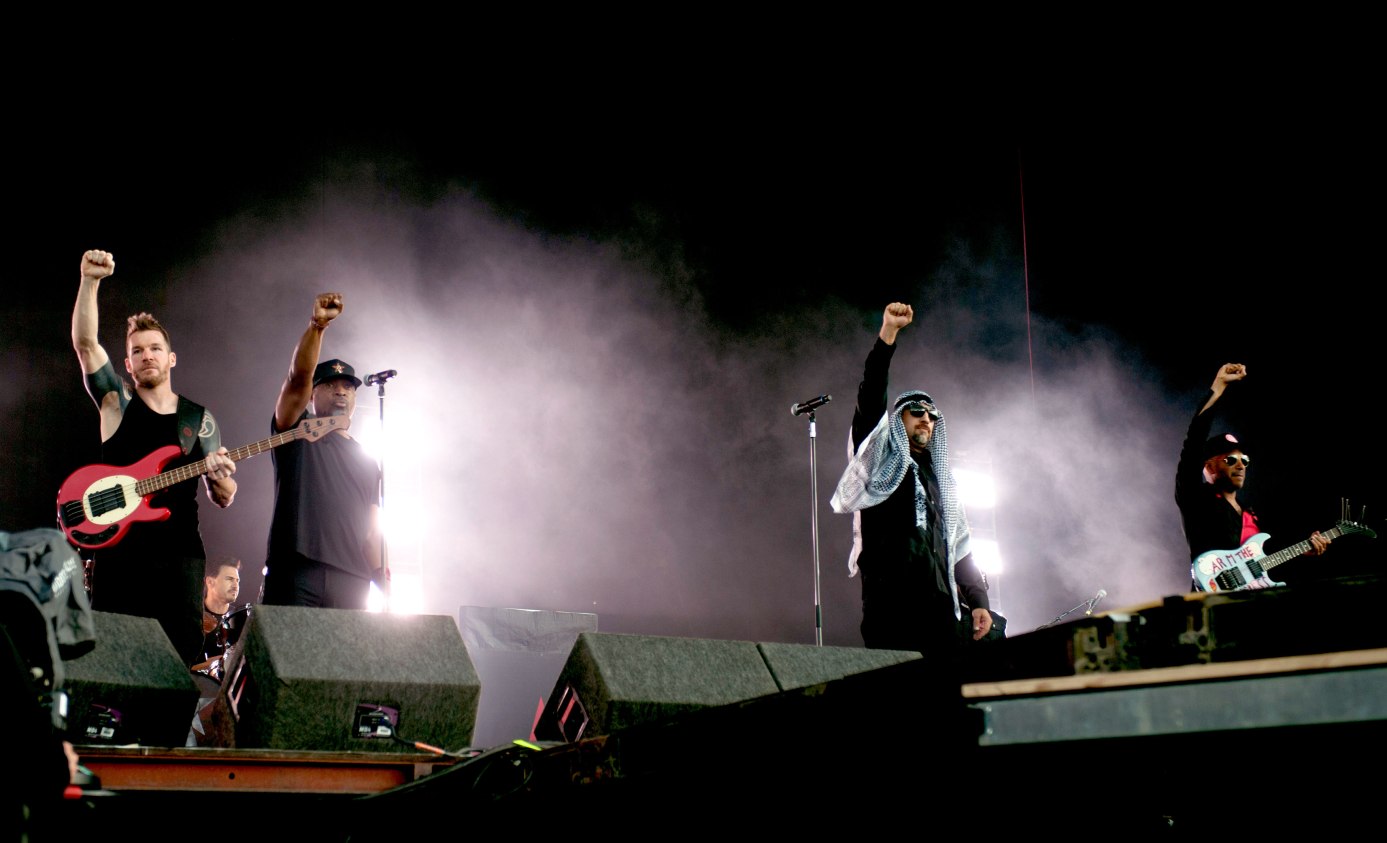 B Real and Chuck D of Prophets of Rage performing live on Day 1 of Download Festival at Donington Park on June 9, 2017 in Castle Donington, UK. Katja Ogrin/Redferns
Music

The rap-rock supergroup is ready to meet all challenges

Chuck D was adamant. The legendary Public Enemy rapper had consented to a phone interview to discuss his latest project, the rap/rock supergroup Prophets of Rage featuring members of Cypress Hill and Rage Against the Machine. But no sooner had the interview begun than Chuck firmly stated that he would only discuss his new group. Presumably, that meant no questions about Public Enemy’s new album, Nothing is Quick in the Desert, nor the recent lawsuit filed against Public Enemy by the group’s iconic hype man, Flavor Flav.

“Right now, my head is propped up trying to remember these words for the next gig,” Chuck D explained from his Boston hotel room, where Prophets of Rage were set to perform at the Paradise Rock Club. “That’s my hardest obstacle right now. Not writing, not recording, but remembering the new songs that I wrote.”

But the tension eased to the point that Chuck D revealed a surprisingly self-deprecating sense of humor, like when the rapper admitted to enjoying splitting interview duties with bandmate Tom Morello. (“Backing him up on interviews allows me to be funny and dumb sometimes, which is good,” he said, laughing.) During another point in the interview, Chuck D got excited confessing his unabashed love for Dollar General stores. “I’m in there all the time!” he exclaimed. “It’s the only place people can come in and get bags and bags of s— for $20. You can’t pass up the deals!”

With superherolike timeliness, Prophets of Rage seemed to arrive just in time to front the musical resistance.

Such humorous asides are in contrast to the recriminations featured on Prophets of Rage, the self-titled album by the band Chuck D recently co-founded with Cypress Hill rapper B-Real, Public Enemy turntablist DJ Lord, and Rage Against the Machine’s Morello (guitar), Tim Commerford (bass) and Brad Wilk (drums). Slated for a Sept. 15 release, the album distills the best of its members’ respective bands, with Morello’s steely guitar riffs hearkening back to the late ’70s heyday of classic rock. Whether rapping about homelessness (“Living on the 110”), marijuana legalization (“Legalize Me”) or President Donald Trump administration (“Hail to the Chief”), Chuck D and B-Real’s vocals lend authentic hip-hop gravitas to the proceedings.

While Prophets of Rage sounds effortless and unforced, Chuck D suggests he and his bandmates feel big-time pressure to deliver. “On paper, this band looks like a no-brainer … so the biggest thing is being able to live up to that,” he said. “We had some mountains to climb performancewise and recordingwise, and it was our goal and obligation to climb those mountains.”

According to Newtonian physics, for every action there is an equal and opposite reaction. That would be a scientific way of explaining the dramatic emergence of Prophets of Rage, a band named after a classic Public Enemy song. In keeping with the revolutionary legacies of their original bands, Prophets of Rage answered the Trump campaign by staging guerrilla performances outside the Republican National Convention in Cleveland. The band then heralded its arrival with a five-song EP entitled The Party’s Over, featuring rocked-up covers of songs by the Beastie Boys, Public Enemy and more. With superherolike timeliness, Prophets of Rage seemed to arrive just in time to front the musical resistance.

But alas, Chuck D is a reluctant caped crusader. “You don’t wish for the world to be f—ed up just so you can be a great band,” said the Hall of Fame MC. “We travel the world to reflect the world’s issues, and to see if we can tie it all together in a concise story. Instead of this belief that a problem has got to be in the United States for you to [care], we say, ‘Here are problems in Sierra Leone or Myanmar that you should also be aware of and have concerns about.’ And if somebody doesn’t get it in Arkansas, or lower Manhattan, or Los Angeles, you say, ‘I’m trying to give you some education, if you give a f—.’ ”

To get that message across, Chuck D knew Prophets of Rage had to compose compelling original songs that rivaled their past works. Toward that goal, he, Morello and B-Real teamed with producer Brendan O’Brien and put noses to the grindstone. The funk-inflected rock songs that eventually materialized forced Chuck to rethink his place within the band. Ultimately, the rapper elected to take a back-seat role, providing counterpoint to predominant rapper B-Real, much in the way that Flavor Flav counterpoints Chuck D in Public Enemy.

“You don’t wish for the world to be f—ed up just so you can be a great band.” — Chuck D

“When B-Real came into the picture, it clicked for me,” Chuck said. “I knew my role wouldn’t be as somebody upfront, but rather as somebody that’s kind of in the shadows. I relished the opportunity to do something different.”

The Prophets’ ideological agenda was articulated on the song “Unf— the World,” wherein the band urges listeners to agitate for positive social and political change (Stand up and rise like the tide/ … no fear, bear witness!). The song title was created by guitarist Morello, whose unflagging faith in grass-roots activism has earned him a reputation as one of rock’s most outspoken and knowledgeable musicians. “Tom has this clear belief that the world won’t fix itself,” Chuck D said. “You’ve got to get up to make these changes.”

Like bandmate Morello, Chuck D has made social uplift a lifelong goal. The rapper surfaced 30 years ago with Public Enemy’s game-changing debut album, Yo! Bum Rush the Show. A veritable explosion of automated rhythm, artful sampling and taunting rhyme, the album poised Chuck D as agitator-in-chief, his clarion voice penetrating the musical bombast like a civil defense siren. Subsequent albums — most notably 1988’s It Takes A Nation of Millions to Hold Us Back and 1990’s Fear of a Black Planet — found the group making good on its initial potential. Public Enemy’s increasingly Afrocentric, conspiratorial stance was illustrated in the band’s stark logo: a black man caught in the crosshairs of a gun’s telescopic sights.

Today, Public Enemy is in the Rock & Roll Hall of Fame, and the group’s first three albums rank among Rolling Stone magazine’s 500 Greatest Albums of All Time. It remains to be seen whether Prophets of Rage will be received as warmly as Chuck D’s past work, but for now the rapper just seems proud to have made a recording that meets his discerning standards.

“I don’t go into the making of any record saying, ‘This record is gonna be what it’s gonna be,’ ” Chuck D said. “I know that when I made It Takes a Nation … with my guys, we knew nothing was like it. So that was our advantage. With [Prophets of Rage], I know there hasn’t been a lineup this significant in its combination of rap, rock and turntablism. … So this record is a reflection of the challenge that we experienced in getting together and pulling it off. I think we met that challenge.”