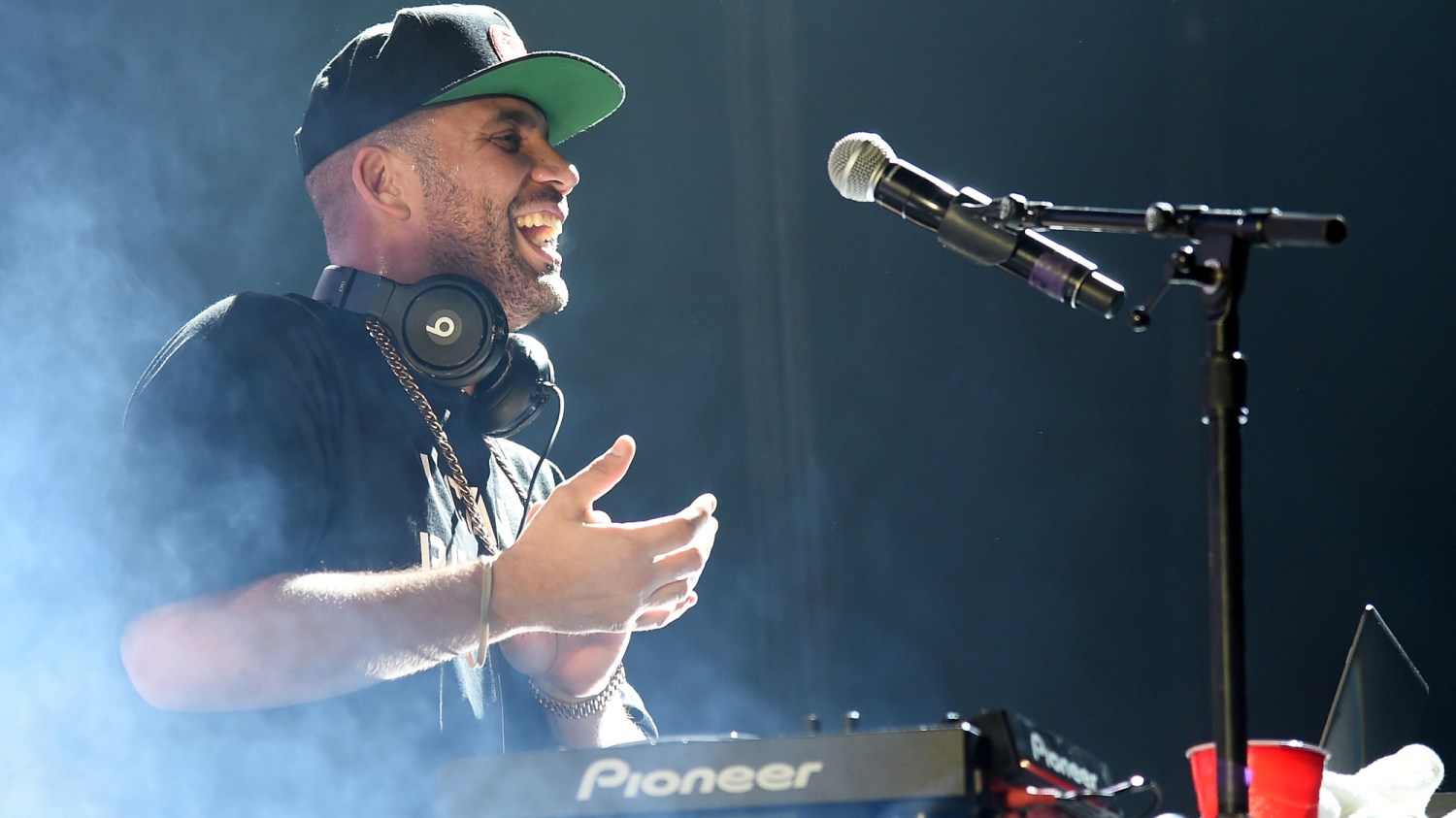 DJ Drama performs at the Mandalay Bay Events Center during a stop of the Boys of Zummer tour on August 7, 2015 in Las Vegas, Nevada. Ethan Miller/Getty Images
Music

If 50 Cent, Lil Wayne and Cam’ron (and the Diplomats) are the three wise men who revolutionized the mixtape game in the 2000s, consider DJ Drama its archbishop. And while mixtapes have become harder and harder to distinguish from actual albums in recent years, Drama’s name and his Gangsta Grillz brand are undeniable hip-hop landmarks. You can’t talk about rap — especially rap in the 2000s — without mentioning the man and the definitive mixtape series of the decade. Nowadays, Drama has shifted focus to full studio projects, most recently with this year’s Quality Street Music 2. For the last nine weeks on the Billboard Hot 100, Drama, the man with more nicknames than Shaquille O’Neal, has enjoyed the success of his slow-brooding, explicitly erotic Wishing, featuring Chris Brown, Skeme and Lyquin. But to understand the journey of “Dram F. Kennedy,” is to understand that 20 years ago, Drama was a freshman at historically black Clark Atlanta University — a member of the Atlanta University Center Consortium (AUC) along with Spelman and Morehouse Colleges and the Morehouse School of Medicine. The southwest Atlanta quartet represents the largest alliance of African-Americans in higher education in the country. Drama wouldn’t change anything about his journey, from making pita sandwiches to selling mixtapes from top of a trash can. From the Germantown area of Philadelphia to the heart of Atlanta, Barack O’Drama takes a trip down memory lane.

I attended Clark two reasons. One was that I had visited when I was in high school and really fell in love with Atlanta. I felt like Atlanta was a vibrant city. I always thought I was gonna end up in New York, and go to NYU film school. When I was in high school, that was my vision and my dream. Then I came to Atlanta … and the city was just moving! The other reason was that I got an academic scholarship. So, yeah, that was pretty much a no-brainer on my end, and my family’s end. I chose Clark Atlanta … I used to spend a lot of time at Howard, too. Howard’s homecoming was an HBCU experience for me in the mid-’90s. I remember they screened Friday before it came out during Howard’s homecoming. I was there for that. I remember seeing The Fugees on campus. I remember the years [The Notorious] B.I.G. was performing.

When I was in college, I had dreads. I didn’t really get a lot of haircuts, but I used to get my beard lined up. They had a barbershop right on Martin Luther King Drive called Philly’s Finest. That’s still there. That’s a staple. Mr. Everything’s is a well-known spot in the AUC as far as food. We had the — I think it was called The Patty Hut. That was the Jamaican spot. Oh, and shout to Stegall’s. Anybody that knows about the food spots in the AUC in the ’90s knows about Stegall’s. And then, of course, Marco’s Pita.

Marco’s Pita was a spot that a former CAU alumni opened up. His name was Marco, my man from Detroit. After my freshman year, I asked him for a job. My friend Chris “Jax” Thurston — rest in peace — who I was in a group with when I was in college, told me that Marco was opening a store on campus [Jax and Drama were part of a group called BINKIS, an acronym for “Before Ignorant N—— Killed Intelligent Songs”]. So I went to Marco at the Ponce de Leon location … I told him I go to Clark and my man told me you was opening up a spot on campus. He opened up Marco’s Pita, which was in the basement of Audrey’s Music Store.

This is important at the time because Audrey’s was a mom-and-pop music store. She was the local retailer for music, so because she was on campus, she used to have everybody come. Jay Z would come there and do signings. Everybody who used to come through the campus would come to Audrey’s. She was the spot.

Marco’s Pita … I used to work in there along with some of my other homeboys. In between classes, I would go there and make pitas, make sandwiches. It was the cool spot. And Marco let me … hustle my mixtapes outta there. I started setting up shop in there. I would have my various mixtapes in there. They let me play them and sell them through [the] store. It was a fun time, man.

This was around the time when The Roots were out, Slum Village, Erykah Badu, D’Angelo, Common. It was such a lane for it and I really didn’t feel like anybody around me at the time was doing mixtapes like that. It was a popular series in the AUC wayyyy before Gangsta Grillz became popular. A lot of people in the AUC were fond of Automatic Relaxation.

As far as the mixtape game goes, it didn’t really happen until I was out of school. But when I was in college, you know, everybody kinda knew me, and [DJ] Sense and Don Cannon when it came to DJ’ing and what we were doing. Around that time, it was more known for like doing all the parties. If it was in the AUC — Clark, Spelman, Morehouse, even Morris Brown — we were those go-to guys the years we were there. Specifically more on campus than the clubs and things of that nature.

A big, big party record at the time was definitely [Puffy’s] It’s All About The Benjamins. No Mo’ Play in GA” by Pastor Troy was huge. That was a superbig one. Up In Here by DMX was hot. No Limit and Cash Money were big. Bling Bling, for sure. Still Fly by the Big Tymers was another one. OutKast, definitely, Skew It On The Bar-B. Even like that Witch Doctor record. All Dungeon Family records. Those were some big ones. Couldn’t Be A Better Player by Too $hort and Lil’ Jon. That’s a good one.

I would get out of class and then set up on top of the strip, on top of a trash can and just hustle my mixtapes. People didn’t really know. They’d be like, ‘Who’s DJ Drama?’ And I’d be like I don’t know him, I just work for him. He told me to be here and set up shop. When I graduated, I never really got a ‘real job,’ so I spent the next couple of years coming back to the AUC, going to Georgia State and various schools, and still setting up shop moving my mixtapes. That’s how Gangsta Grillz was pretty much born. There are people that have bought Gangsta Grillz directly from me from campuses if you were around during those years.

Those were pretty legendary times. I would still come back years after I was outta school when Trap or Die was hot or Dedication was hot. But by that time, I wasn’t really hustling myself.

The style? Yo, definitely Iceberg was poppin’ for a minute. Polos. But that’s when I really remember when people started wearing hats above their head to the back. Ma$e came to school when I was there. He came like my junior year. That was pretty crazy. We had like the biggest rap star in the game come to Clark Atlanta University and just kick it. He made the student center. We had just built the student center and that used to be the hangout spot. Ma$e kinda made that the go-to spot because everybody knew that’s where Ma$e would be. People would have their New York hats sitting on top of their head like how Memphis Bleek used to wear it back in the day. But at that time, anything Jay Z probably said was cool, was cool.

[Pledging] wasn’t really my speed, but they used to always hire us for gigs. I was pretty much cool with everybody. I was on my own. I’ll tell you who had the craziest parties — the AKAs. Why? I think that should be self-explanatory [Laughs].

As far as my best memory, man, that’s tough. Probably meeting Sense and Cannon. All my friends now that I’m with or in business with, we all met because of the AUC. For that, it’s a special place. These relationships are going on 20 years. My worst? Probably being on campus when we got the news Tupac had died [in 1996]. He had just gotten shot when I first got to Atlanta, but it was really like, ‘Ahh, Pac got shot again. It’s nothing. He’ll survive.’ I remember being on campus when the news hit then.

But the best thing I got from Clark Atlanta were my friends. But deeper than that, just the connections. It’s so many people within all walks of life now that I know from the AUC. It’s a great connection to have, to watch, to know, to be able to call upon or be called upon with people that I share that experience with. Also, I just think that coming to Atlanta … I believe things are meant to be, in a sense. For me, being a kid from Philly and coming down to the South and changing the mixtape game and being such an integral part is part of the story. But Atlanta — and specifically the AUC — has so many young people from all over who have dreams and ambitions and goals. When I got to school, it wasn’t technically for me to go get a job somewhere and work a 9-5. I was like, yo, this is a place where I can really do my thing and become what I want to become.

I had visions of this somewhat back then. I think about how it helped me. Here was kids from all over that every summer or every spring would go home and talk about me or my name or take the mixtape home. It really taught me how to be very well-rounded as a DJ and with music in general instead of, let’s say, if I would’ve went to school on the East Coast or maybe Florida. You had to please so many people from so many places. The West Coast, the South, Texas, Louisiana, New York, D.C., Philly. Everybody wanted to hear their s—. It taught me how to be very well-rounded.

I went to homecoming last week. Lil Uzi Vert had a show. It was kinda crazy. I remember being in school. We had Foxy Brown and LL Cool J for our homecoming show. So for me to come back 20 years later, here I am coming back to homecoming and my artist is the headliner for the homecoming show. It’s pretty cool.