Prairie View A&M men’s basketball coach Byron Smith instructs his players on the best way to defend the pick-and-roll and how to tell the difference between a good shot and a bad shot. When shoptalk ends, Smith changes lanes and painstakingly tells them how to survive the game of life.

“My message as an African American college coach is to make sure our young men are aware,” said Smith, who is 44-5 in his last three seasons in the Southwestern Athletic Conference (SWAC), which include three straight regular-season titles and a trip to the NCAA tournament. Next is an upcoming matchup against the University of Michigan in the inaugural Coaches vs. Racism HBCU Roundball Classic on Saturday at the Entertainment and Sports Arena in Washington.

“If there is profiling going on and there are issues with the police,” Smith reminds his players, “be careful. If there is an encounter at a routine traffic stop, be as respectful as possible to try and diffuse any situation. Being an African American coach, it starts with us as role models and leaders.”

Michigan and Prairie View were selected as much for their on-court excellence as they were for the undeniable fact that two Black coaches — Smith and Michigan’s Juwan Howard — are leading the charge at their respective schools.

The brainchild of the classic’s executive director Darryl Woods, and using the successful Coaches vs. Cancer showcase as a model, Coaches vs. Racism is a 501(c)(3) national nonprofit highlighting systematic racism as a “root cause of the inherent disparities that exist in sports.”

Dates have already been lined up for November 2022 in Las Vegas, with Atlanta and Houston targeted as potential sites for future games. Women’s games are also being considered.

For Howard, who last season became the first person ever to earn a No. 1 seed in the NCAA tournament as both a player and coach in guiding Michigan, his alma mater, to the regional final, signing up for Coaches vs. Racism was a no-brainer.

“It was an easy decision for us to take part in this game,” Howard said. “This is a cause for us to seek change, not just play a game on a neutral court. If we can use the game of basketball to help serve our communities as an opportunity to shed light on the injustices happening in this country and around the world, I am all for it. 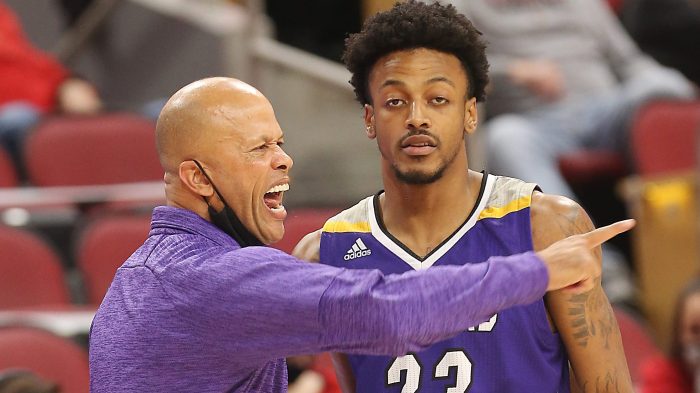 Smith said there was absolutely no hesitation when Prairie View was approached to participate. In fact, Smith understands exactly why the Panthers were selected to represent not only the SWAC against a prestigious Power 5 opponent but all HBCUs.

“We were approached being an HBCU and having a winning program, and our location right outside of Houston, the hometown of George Floyd, where all of this started,” said Smith, who has been named SWAC Coach of the Year in three consecutive seasons. “Our goal is to play the best competition to give our kids an opportunity to get national attention. But also to be agents of change and be part of the conversation to see if we can change some of the social issues we’ve been having in our society today.

“I do think that having two African American coaches being active participants in this movement is huge,” Smith continued. “Coach Howard has a tremendous platform, being a former NBA All-Star and doing one of the best college coaching jobs in the country. I’m hopeful that this will be a movement and not a moment.”