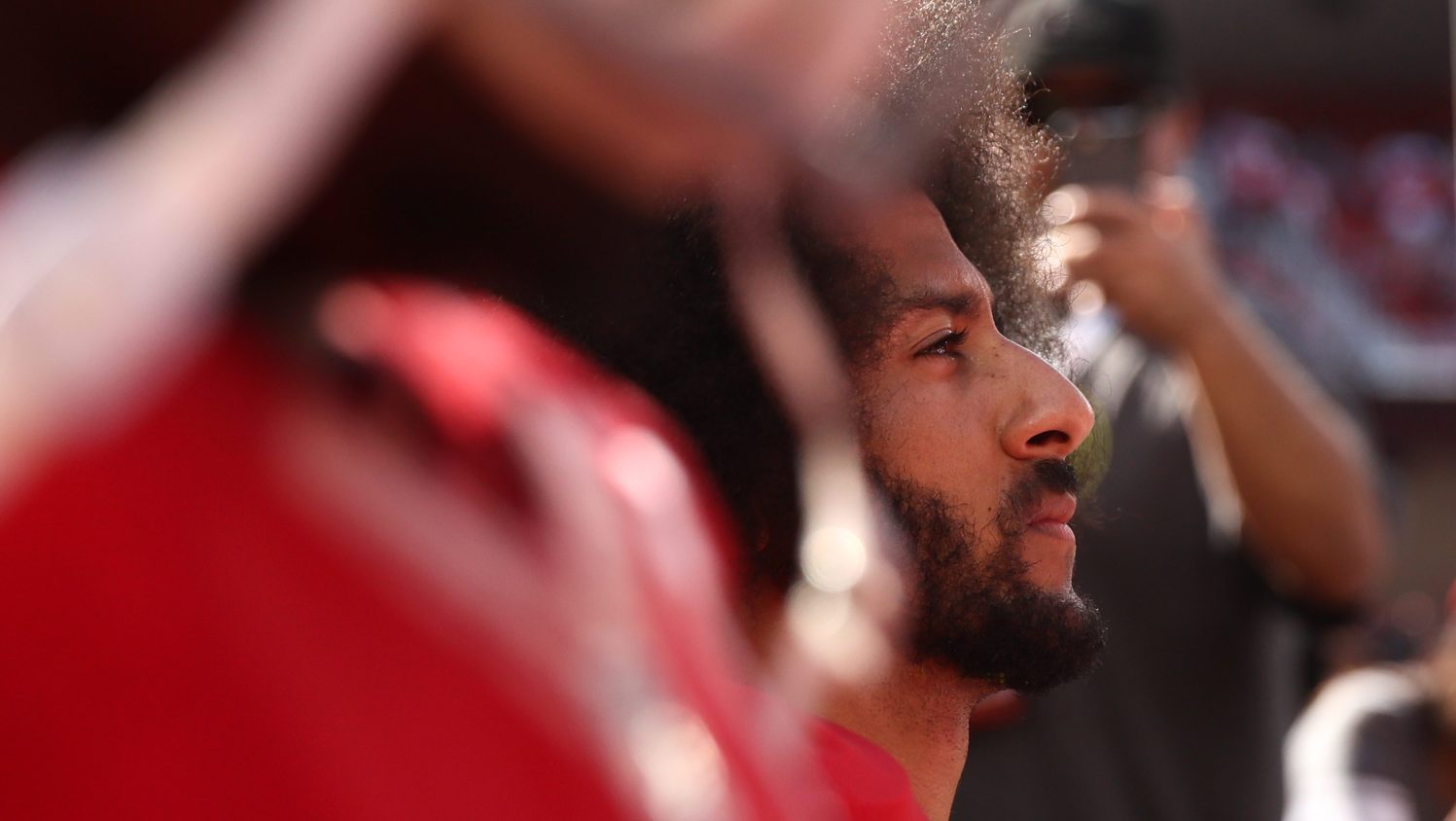 Colin Kaepernick #7 of the San Francisco 49ers walks in to the stadium prior to their NFL game against the Tampa Bay Buccaneers at Levi’s Stadium on October 23, 2016 in Santa Clara, California. Ezra Shaw/Getty Images
NFL

Kaepernick answers what’s next: Inclusion and access to the halls of power in sports

‘I’m considered privileged for someone of color’

The San Francisco 49ers lost their sixth game of the season on Sunday.

Quarterback Colin Kaepernick, author of the most stunning individual athletic protest since Olympians Tommy Smith and John Carlos, lost his second straight game as their starter.

Kaepernick, to his great credit, has made the playing of the national anthem the most uncomfortable three minutes in America by refusing to stand and calling attention to the political, economic and judicial mistreatment of African-Americans.

Before Sunday’s game, 49ers owner and co-chair Denise DeBartolo York came over and gave Kaepernick a hug and a kiss on the cheek. “Denise has always been great,” Kaepernick said after the game. “She’s a great woman. I’ve always had a good relationship with her; to have her support, her backing really means a lot.”

Kaepernick was outdueled on Sunday by another black quarterback, Tampa Bay Buccaneer Jameis Winston, who threw three touchdowns to Kaepernick’s one.

But Winston isn’t doing any kneeling.

After the loss, Kaepernick was asked by The Undefeated what he thought about suggestions that he is partly to blame for the NFL’s declining TV ratings. The results of one survey showed that some viewers were protesting Kaepernick’s protests by not watching any games.

“I don’t know much about ratings and how they’re affecting all of these things, but I don’t understand why ratings would go down just because someone is fighting for justice for people, trying to stop oppression, especially in a league that is predominantly black.”

Nonetheless, the 49ers are 1-6, and the fans were sparse Sunday. In an attention-deficit society like ours, interest in Kaepernick’s silent protest is in danger of being buried beneath World Series fervor and the start of a new NBA season.

The question for Kaepernick is the question that every black activist, revolutionary and martyr in this country has had to answer for the last 400 years:

“Where do we go from here?”

“How do you convert a silent protest into action?”

The answer is simple, though the execution is not.

High-profile black athletes like Kaepernick have to take the protest into boardrooms and executive suites. They must force the teams for whom they play, apparel companies that they represent, to hire and promote African-Americans as well as place them on their boards. They must insist that their teams and the large manufacturing companies they do business with do so with an ever-widening network of black vendors. This is not public work and it’s not sexy, but athlete-activists can use their increased visibility to raise the question of economic inclusion and use their leverage to force the answer.

“I don’t think it’s far out; ultimately, it’s something that takes time,” Kaepernick said. As he left Levi’s Stadium, Kaepernick and I had a brief but pointed discussion about these next steps. He talked about the need, beyond protest, for an initiative that attacks the structural racism that keeps African-Americans out of the sports industry’s lucrative economic ecosystem. Yes, there had to be viable candidates for corporate boards and viable vendors with whom the teams and companies could do business.

But Kaepernick has hung out in the corridors of power enough to know that force and leverage are the names of the game. Nike, which has two African-Americans on its board, is the apparel company he’s under contract with.

“Ultimately, even when there are people who can get in those positions, they might not get the same opportunities,” Kaepernick told The Undefeated, referring to corporate board candidates and potential vendors. “That’s where it’s a systematic issue because the people who are in power aren’t of color, and they’re in control. It’s almost a monopoly: who is in power, who’s over the hiring, who is able to get to those positions.”

The essence of Kaepernick’s Star-Spangled protest is tied to a vast universe of access denied. Access is not impossible, just made difficult. “Not just in sports,” Kaepernick said. “It’s in education, in economics, in education in media, black representation is limited, and that’s part of this issue.”

And he is one of the lucky ones.

Like many of his colleagues who play professional athletics, Kaepernick grew up in challenging circumstances but became big enough, fast enough, strong enough — possessing enough skills — to catapult himself through an invisible cage of bias. He has landed in the general vicinity of the golden life, populated by communities of billionaire team owners and their associates.

Many of them though, as well-meaning as they may be, do not see how to address the issues that Kaepernick and others have brought to light.

Kneeling for the national anthem has certainly made ripples. But the next level of protest, especially for black athletes concentrated in professional football and basketball, is challenging teams and the companies with whom they do business to put more African-Americans on their corporate boards, to do a more robust business with black vendors.

This is activism from the inside. Using visibility and leverage to participate in what John Rogers calls the “capitalist democracy” in a full way.

Rogers is the founder and CEO of Ariel Capital Investments, the largest minority-run mutual fund firm in the United States. I’ve spoken with Rogers over the years about athletes and activism — he was the captain of Princeton’s Ivy League basketball championship team in 1979-80. We’ve recently spoken about Kaepernick and the rare opportunity this generation of black athletes has to make an economic impact on the communities from which many of them come.

Rogers said that as sophisticated as he thought he was, he had no idea of the wealth passing back and forth before he got on corporate boards.

“I didn’t know how unfair it was until I got to be on these boards and started to realize the amount of wealth related to business,” Rogers said. “You don’t know it until you get into these positions of power, then you begin to see the amount of wealth, the real estate developers, the billionaires —you see that we are nowhere.”

For high-profile, well-compensated athletes like Kaepernick, the first next step is to ask team executives and CEOs whether they are recruiting African-Americans for positions of leadership and influence within their organizations. Are they doing business with black vendors?

Kaepernick has effectively used a silent gesture during the national anthem to remind the nation of its responsibility to live up to the commitment of fairness and inclusion.

Now it’s time to carry the struggle into the boardroom, ask the tough questions and demand action.