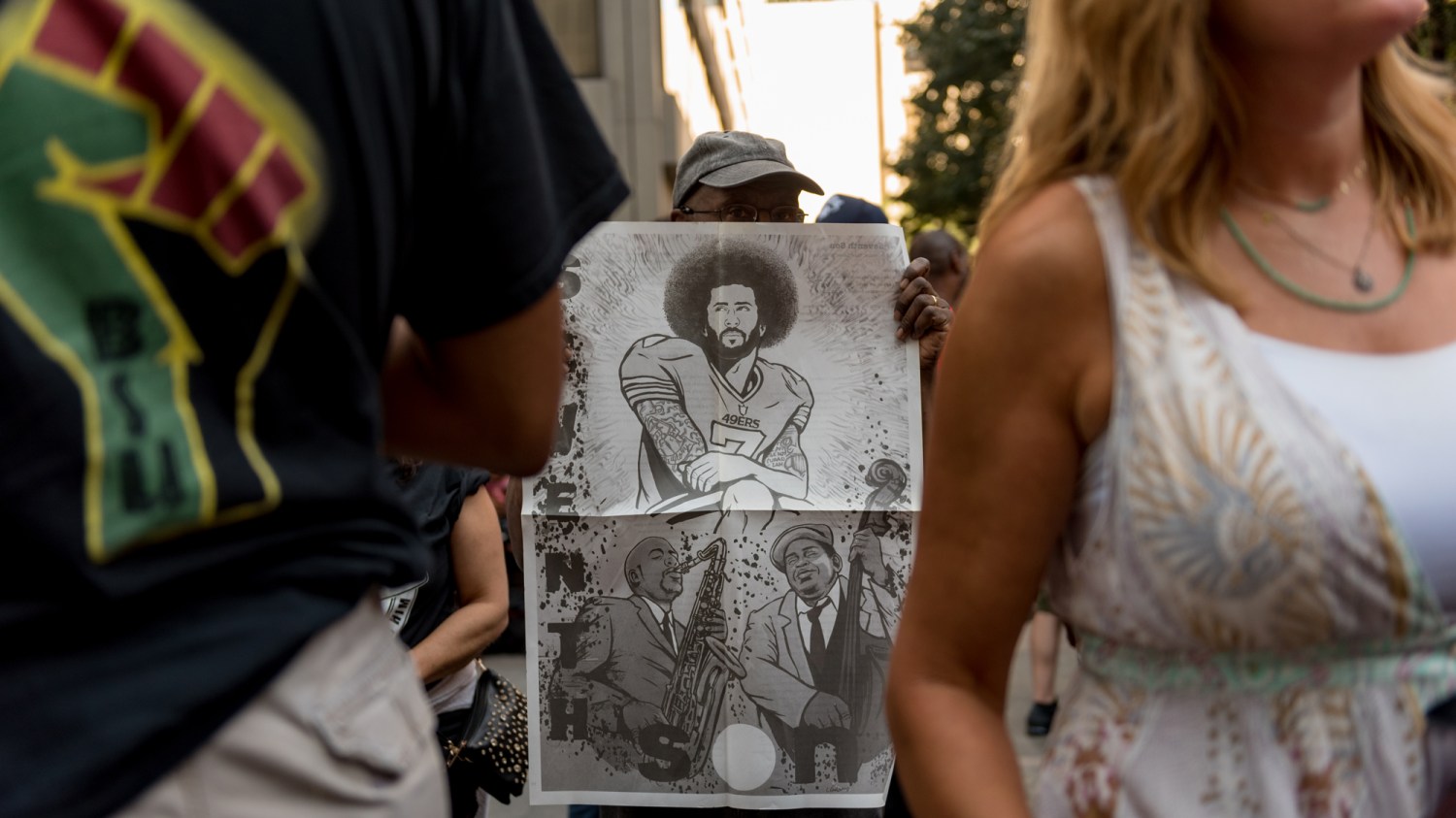 Colin Kaepernick gets a strong show of support at rally

But organizers are denied an audience with high-ranking NFL officials

NEW YORK — An energetic crowd here Wednesday evening cheered on Colin Kaepernick, providing its support for the unemployed NFL player who risked his lucrative career and became the face of a new civil rights movement in the process.

The NFL headquarters at 345 Park Ave. became a gathering point for protesters frustrated that the accomplished passer, who did not participate in the United We Stand Rally for Colin Kaepernick, is still looking for work after his peaceful and impactful political protest last season while he was a member of the San Francisco 49ers. With Kaepernick jerseys visible throughout the sprawling group, attendees held signs mostly praising Kaepernick’s efforts on behalf of black and brown people — as well as some calling for a boycott of the league until the veteran player gets back in the game.

Protesters listened attentively to speakers on the front line of the battle for justice and racial equality, who alternately railed against the NFL for its perceived mistreatment of Kaepernick and the growing racial divisiveness in the U.S. At times, members of the program, which ran about 90 minutes, led the crowd in chants to back Kaepernick.

The rally’s organizers beamed about the turnout — some planners estimated the crowd size at more than 1,500 — and vowed to continue applying pressure to keep Kaepernick’s job search in the news. There were no significant incidents of unrest, according to members of the New York Police Department.

The day, however, wasn’t a complete success for the 20 organizing partners.

After sending a letter to NFL commissioner Roger Goodell outlining major changes they sought in league policy regarding player advocacy and racial equality, organizers had hoped to meet with high-ranking NFL officials before the rally. The meeting did not occur. The activists’ response to the NFL was clear: Onward.

“It is a disappointment that the NFL declined to meet with members of the coalition,” said political strategist and CNN commentator Symone D. Sanders, one of the rally’s organizing partners. “We believe that the coalition that we’ve assembled, and the requests that we have put forth, bear a certain level of magnitude and merit that deserve to be heard and deserve an actual meeting. We’ll keep working to make that happen.” 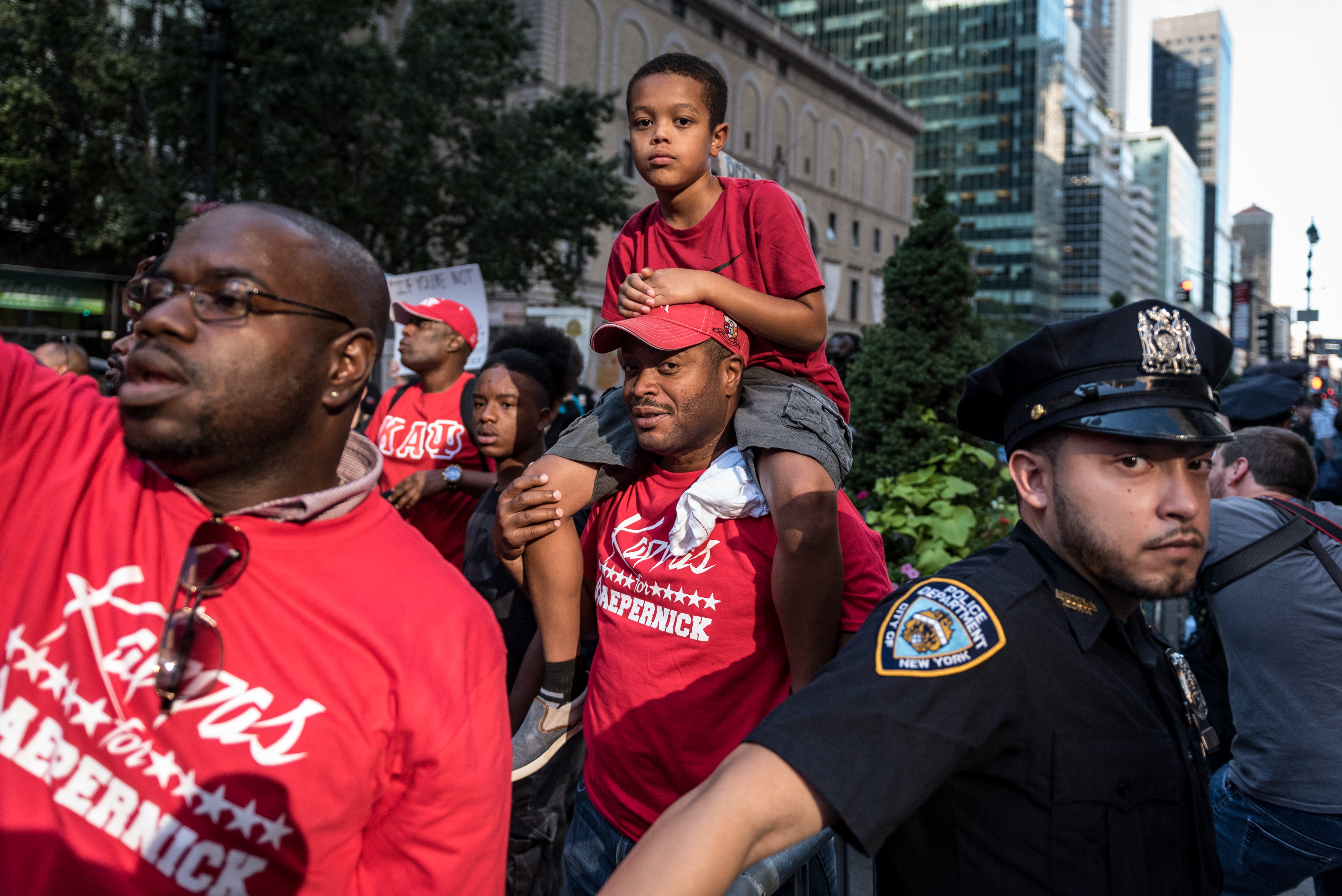 The NFL informed the organizers that “we would not be able to pull together a meeting today,” NFL spokesman Brian McCarthy wrote in an email to The Undefeated. “We said we would look to set up a meeting in the next few weeks with groups that have reached out to us.”

Before the rally, planners in their letter requested that the NFL “implement a policy guaranteeing the freedom of speech of players to express their concerns on social justice issues.” Beginning in the 2016 preseason, Kaepernick sat and then kneeled to draw attention to issues of policing in the African-American community. His form of political protest did not violate the NFL’s collective bargaining agreement (CBA).

The United We Stand coalition, however, wants the NFL to add strong language to the CBA essentially endorsing the players’ right to use their platforms without fear of backlash within the game. The coalition also seeks to have the NFL “establish a unit tasked with developing a leaguewide plan to improve racial equality” in the game.

On the field, the NFL is mostly black: Almost 70 percent of the players are African-American.

In the executive offices, though, it’s the opposite story — there are relatively few people of color. The NFL’s diversity problem has resulted in an environment in which Kaepernick has been blackballed with impunity, many in the crowd said.

For the coalition, having a sit-down with league officials would be encouraging, but “we don’t know when or if a meeting will take place,” said Stephen A. Green, another lead organizer. “There’s still dialogue. That’s helpful. It provides us with a level of hope, so we’re cautiously optimistic. And with the support we have, we definitely have a message the NFL needs to hear.”

The NAACP, which also worked to bring the rally to the NFL’s doorstep, would like to meet with Goodell and his lieutenants as well.

Kappa Alpha Psi Fraternity Inc., a Greek-letter fraternity of which Kaepernick is a member, was out in force. Wearing “Kappas for Kaepernick” shirts, fraternity members, known as “Nupes,” were among the first to arrive for the rally and were vocal throughout. Kaepernick has made them proud.

“So many professional athletes have an opportunity to utilize the platform they have to state things that we already know exist, but so few of them are willing to risk their professional careers and their income to do that,” said fraternity member Rob Robinson, 48, who’s from Brooklyn. “Colin just simply took a knee to be able to express what we already know is the [truth], which is the problems with policing in black communities. He was willing to use his platform to raise awareness. That’s why we have to come out to support him.”

It appears the movement Kaepernick ignited has reached a new level. White NFL players are now participating in anthem protests, “and it’s difficult to ignore that … players want to use the solemnity of the moment of the national anthem to make their own statement. And who does that hurt?” said organizer Mark Thompson, a SiriusXM radio host. “It’s a mistake for the NFL to treat these individuals as automatons. They’re human beings. They have thoughts. They have feelings. They’ve taken a stand. And that’s not going to stop.”