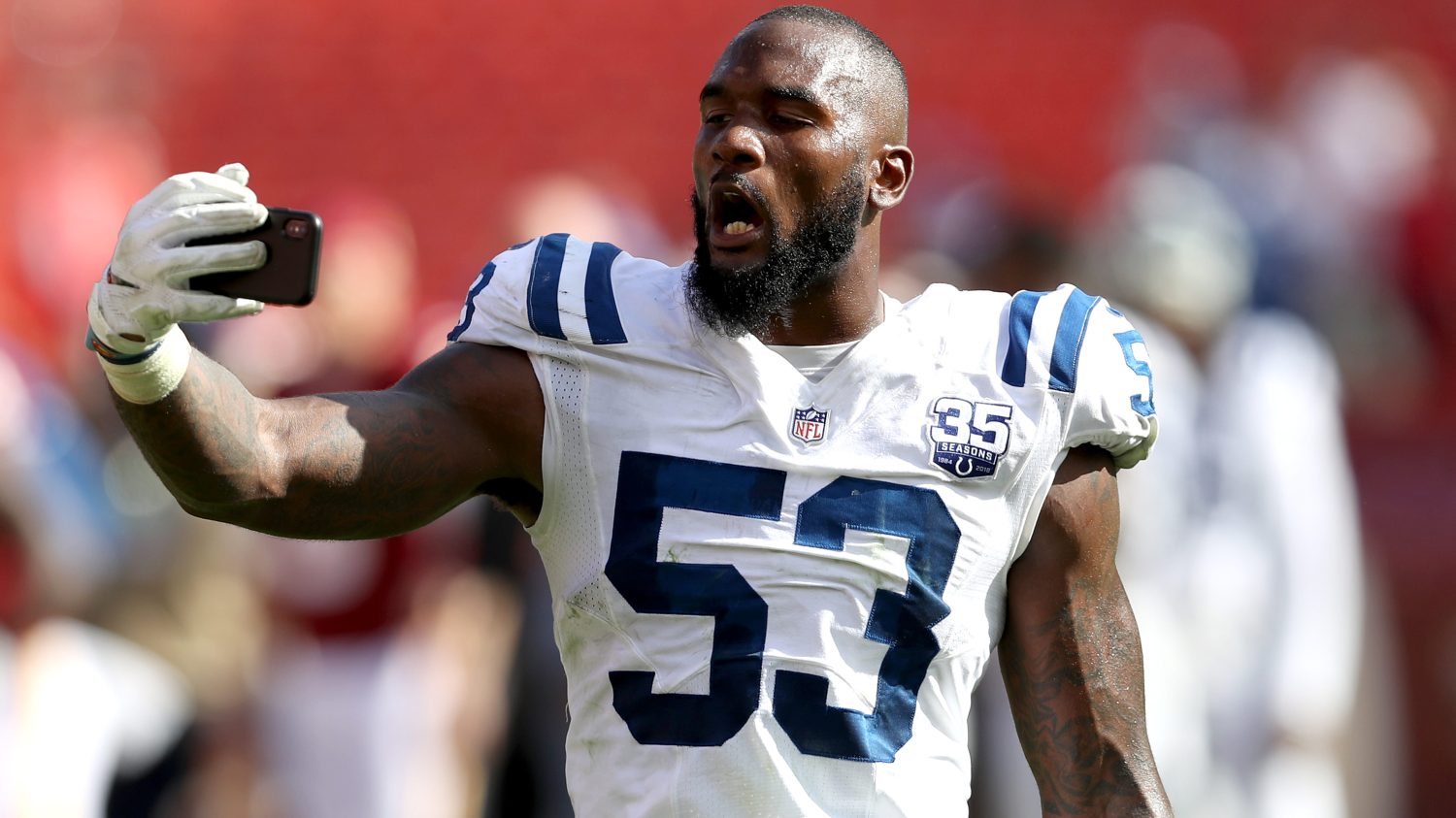 Darius Leonard of the Indianapolis Colts talks on a cellphone following the Colts’ 21-9 win over the Washington Redskins at FedEx Field on Sept. 16 in Landover, Maryland. Rob Carr/Getty Images
NFL

Colts’ Darius Leonard is tackling everything that comes his way

Spurned by Clemson, the rookie linebacker made his name at a small black college and the NFL is taking notice

When Darius Leonard first arrived at South Carolina State, he was playing both sides of the ball as a wide receiver and linebacker. It was something he said he expected to do for all four years of his college career, but his coach, Oliver “Buddy” Pough, had other plans.

“He kind of threw me on defense and was, ‘Stay there,’ ” Leonard recalled.

The longtime football coach at South Carolina State chuckled at the thought – he can do that now – after reflecting on the player who set the career record for tackles (394) at the historically black college in Orangeburg and was selected 36th overall by the Indianapolis Colts in the 2018 NFL draft.

“He wanted to be a wide receiver here, and now looking back on it, I wish I had [played him at receiver] … I probably screwed that up,” said Pough, who is in his 17th season as head coach of the Bulldogs and has been a part of the program as a player, assistant coach or head coach for more than four decades.

“We had him redshirted as a freshman because he was, like, about 180, 185 pounds, somewhere in that neck of the woods — and we were laughing then that he was the best player on our team, and he wasn’t even playing. But [Darius] was one of those players who’s always been a little bit above what you think a player like that could be. But hindsight is always 20/20.”

Leonard, in his first year in the NFL, leads the league with 54 tackles and has played a big role in improving a Colts defense that finished 30th out of 32 teams last season in total defense and allowed 367 yards per game.

“If you had told me that I’d be leading [the NFL] in tackles in my rookie year, I think I would have told you that I didn’t believe you,” said Leonard. “I’m just coming from a small school, and I thought I was [going to] take a little more time to actually get right.”

Leonard isn’t the only one surprised at his start; even those who’ve followed his trajectory – from high school to this point – admit to the same.

“I’m surprised that he’s been able to play at such a high level,” said Ernest Robinson, who called all of Leonard’s games as the play-by-play radio announcer for South Carolina State.

“We’ve seen him play that way before, we just didn’t think it would translate that quickly at that level. But what he does doesn’t surprise me from the standpoint of how hard he works. He puts in a lot of effort in everything that he does. He won’t be outworked, even at that level.”

“When I got drafted, there wasn’t a lot of praise of me going early, so I was just dying to still prove everybody wrong.”

Far from an imposing linebacker at 6 feet 2 inches and 234 pounds, Leonard is doing in the NFL what he did at South Carolina State, where he started all 43 games during his career, leading the team in tackles three times and earning Mid-Eastern Athletic Conference Defensive Player of the Year his junior and senior years.

Unlike his college career, however, there was no doubt in the Colts’ mind as to where Leonard would play. A starter from the beginning, Leonard let the nation know who he was – and where he’s from – when he had 18 tackles, a sack and a forced fumble in the Colts’ 21-9 win against the Washington Redskins on Sept. 16.

“A star in the making,” is how veteran defensive lineman Al Woods described Leonard to ESPN.com’s Mike Wells. “Just a guy that comes to work every single day. He takes the good with the bad. Takes the coaching, he talks to the older cats, he always tells me to remind him about his alignment. He does a good job with everything. Everything you want out of a young player.”

South Carolina State wasn’t supposed to be the landing spot for Leonard – not in his mind, at least. The Lake View, South Carolina, native was dead set on attending Clemson, where his half-brother Anthony Waters played from 2002 to 2006 and later had a short NFL career with the New Orleans Saints and San Diego Chargers.

Though he’d been on Clemson’s radar – Leonard attended football camps there as a high schooler – the scholarship offer never came. But Clemson’s loss would be Pough’s gain as Leonard would anchor his defense and, like most professional athletes, be driven by a desire to prove people wrong.

When the opportunity came to show the Tigers what they’d missed, Leonard responded with a 19-tackle performance when the Bulldogs met the Tigers during his junior season.

It’s the same fuel that drives him in the NFL now.

“When I got drafted, there wasn’t a lot of praise of me going early,” he said when discussing his breakout game against the Redskins, “so I was just dying to still prove everybody wrong.”

In a league that’s all about making adjustments, Leonard will have to contend with teams game-planning around him, something you can bet is already in the works with arguably the best at it: Bill Belichick, whose New England Patriots host Leonard’s Colts on Thursday night.

“Darius is going to have to do a lot of homework, because the NFL is all about homework,” explained Robinson. “And one of the things that Darius has in the NFL that he did not have at South Carolina State is access to video to seeing highlights and all the time studying on plays. Darius will do that – even though he didn’t have access to that in college, so from that standpoint, that’s new to him. So, as they prepare for him, he’ll be able to be that much more prepared.”

Before his first NFL game on Sept. 9, Leonard allowed himself a moment to reflect on his journey.

“That first game against Cincinnati I came out for warmups and I just felt a whole different vibe there and that’s when I kind of … took it all in,” explained Leonard, who had nine tackles (six solo) in that 23-34 loss to the Bengals.

“It was just a lot of emotions coming out. It was everything that I worked for, so just coming out of the tunnel … I was just kinda happy, emotional a lil’ bit, just ready to play.”

“We’ve had our ups and downs, [but] I think he’s one of the top guys I’ve ever had a chance to coach, and I think he knows that,” explained the coach. “I just think we just kind of have to continue to see where we’re going to from here.”

For now, Leonard is representing his alma mater as well as can be. Few teammates even knew of his school with an undergraduate enrollment of 2,524, or that players from historically black colleges steadily ball out. Now, the entire league is on notice.

When asked about his goals for this season, it comes as no surprise that they’re lofty: “I want to win the Super Bowl, be the Defensive Player of the Year, and go to the Pro Bowl.”

He’s well on his way.