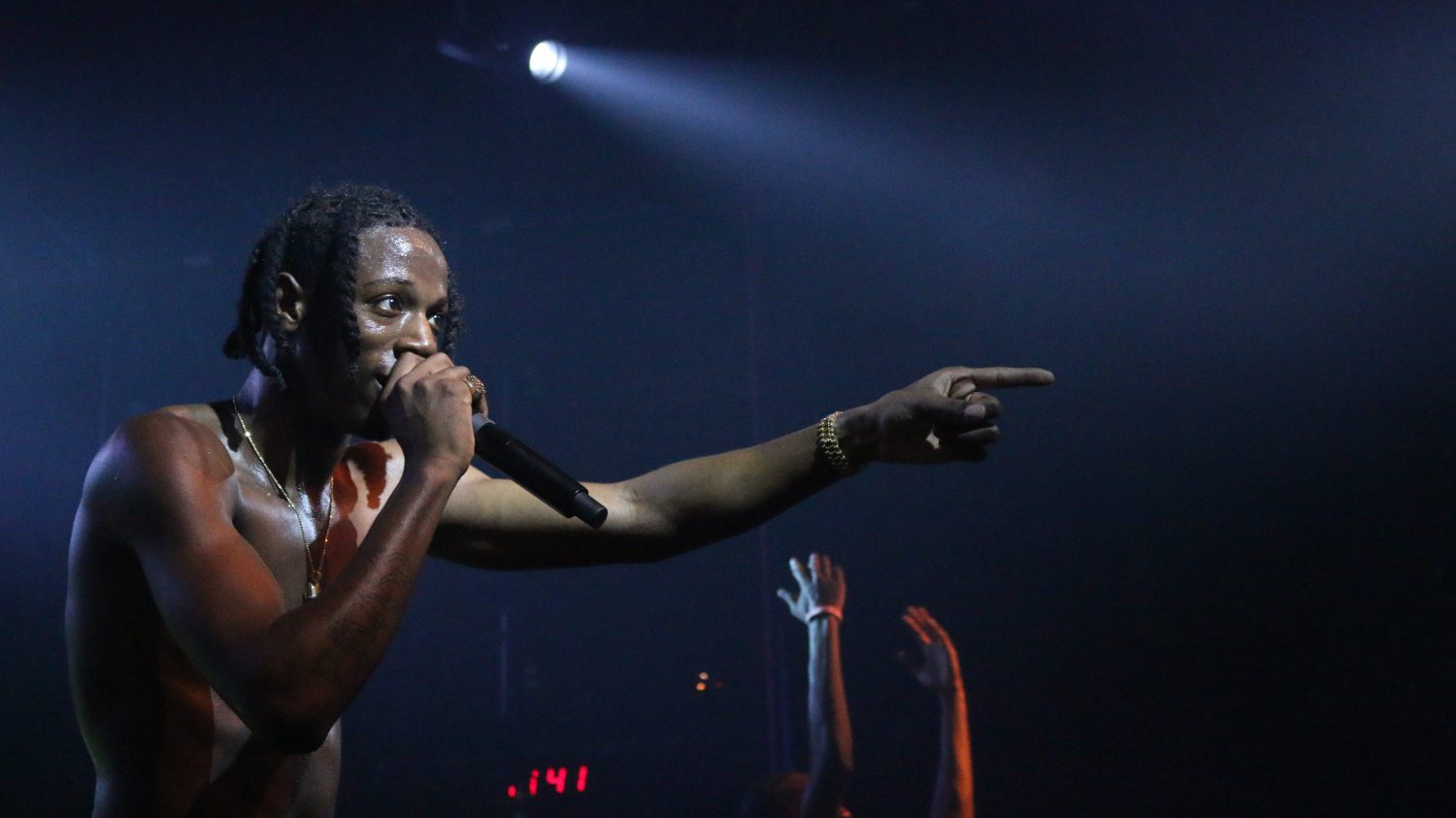 Joey Bada$$ points to the crowd at Steez Day concert July 7, 2017, reminding them to never sleep on yourself. After the death of STEEZ, Bada$$ himself battled depression and contemplated even giving of music but didn’t as an example of not succumbing to mental illness. C. Isaiah Smalls II/The Undefeated
Hip-Hop

The 19-year-old rapper committed suicide in 2012

Every July 7, fans can expect to hear words of encouragement from rapper Joey Bada$$.

This year, he shouted to a sold-out crowd at the PlayStation Theater in midtown Manhattan, “You may sleep on a bed, on a couch or on the floor, but never sleep on yourself.”

Since 2015, Bada$$ and his Brooklyn, New York-based hip-hop collective Pro Era have brought together some of the hottest up-and-coming artists in hip-hop for a one-night show on that date. This year’s lineup included A$AP Mob, Ab-Soul, The Underachievers, Saba, J.I.D., Jay IDK and Jazz Cartier. The goal is to share music and pay homage to the late Pro Era founder Jay Steez, known as Capital STEEZ. The 19-year-old rapper committed suicide in 2012.

The show started at 7 p.m., but some fans started lining up in front of the venue as early as 9 a.m. If any were fatigued, they failed to show it.

Chants of “Steelo” and “R.I.P. Steez” erupted at whim. Disguised as a concert, the event’s true purpose was to promote positivity, of which Bada$$ is a shining example.

Pro Era’s leader has been relatively quiet since the death of his best friend. He only recently began to open up publicly about his bouts with depression resulting from Steez’s death.

“When it first happened, me being the most popular in the crew, I kinda just had to hold it down,” Bada$$ said on The Angie Martinez Show on New York’s Power 105.1 FM radio. “At first, I kinda had to make sure everybody else was good before I even took my own feelings into consideration. I was real young, but I still had to keep it running, still had to keep it going. I didn’t deal with all the pain right away, head-on. I’ve been dealing with it over the years, and it’s been a long process.”

To understand the process and the pain, you’d need to start with the first line in Steez’s song “Survival Tactics.” This was where the 17-year-old Brooklyn-born MC triumphantly announced his arrival and put the rap game on notice.

N—-s don’t want war/ I’m a martian with an army of spartans/ sparring with a knife in a missile fight.

The song, released in February 2012, caught the attention of hip-hop heads and thrust Bada$$ and fellow rap collaborator Capital Steez into the limelight. At the end of the PlayStation show, Bada$$ announced that King Capital, the album STEEZ recorded before his death, would be released on Dec. 23.

This appeared to be an optimistic start for Pro Era (short for Progressive Era). Steez launched it in 2011 with one goal in mind: to change the rap game forever.

In a WNYU interview shortly after the release of Survival Tactics, Steez explained his reasons for creating Pro Era.

However, neither the success of the song nor Steez’s vision and ambition could prevent tragedy. Ten months after the release of “Survival Tactics,” Steez was found dead in the middle of a street in Manhattan’s financial district. The 19-year-old had jumped off a nearby building.

He left no explanation, just a cryptic message to his Twitter followers.

The lack of details or media coverage about Steez’s death left many in the hip-hop community shocked. Some even developed elaborate conspiracy theories in an effort to explain Steez’s death. Nearly five years later, people are finally starting to realize what led Steez, born Courtney Jamal Dewar, to take his own life.

Songs such as “Dead Prez,” off his debut mixtape AmeriKKKan Korruption, give listeners a brief glimpse into Steez’s psyche. On the Bada$$-produced beat, Steez raps in reference to his commitment to music: Some people like to compromise for the dollar sign, but I had my mind aside/ I told Jakk from the get that I’ma ride or die/ And I’d rather die by homicide/Instead of goin’ out without a pride.

Discontent with the music industry, the initial poor reception of AmeriKKKan Korruption and the descent into an abnormal form of spirituality may have contributed to his demise. But what ultimately killed Steez was depression, a condition far too common in the black community.

African-Americans are 20 percent more likely than the general population to experience issues related to mental health. The likelihood of experiencing depression, post-traumatic stress disorder or other mental health conditions is linked to socioeconomic status.

Combine Steez’s battles with depression with a mistrust of doctors, a common issue in the black community, and Steez believed he had no one to turn to. For that reason, Bada$$ and the rest of Pro Era established Steez Day, the annual music festival held in honor of their fallen comrade.

At this year’s concert, Bada$$ looked whole. The crowd was energized, and he reciprocated with passion and witty lyricism. While his grieving process is certainly far from over, it seems as if each festival grants Bada$$ one more opportunity to connect with his brother.

As his set continued, the stage filled with Steez’s family, as well as fellow members of Pro Era such as Kirk Knight, Nyck Caution and Dirty Sanchez. Toward the end, Bada$$ handed the mic to Steez’s mother, affectionately nicknamed Momma Steelo, who thanked the crowd for supporting her deceased son and the rest of the Pros.

The show closed with the song that started it all. With an explosion and military-style marching, “Survival Tactics” began and Bada$$ looked even more at peace.

At any concert, there are rare moments in which the artist and crowd are connected, where both were rapping or singing in unison. The fact that it happened during Steez’s memorial concert made it nearly a spiritual experience. Once Steez’s verse began, Bada$$ lowered the mic from his lips because he did not need it. Everyone at PlayStation Theater, from Momma Steelo to the crowd to the Pros, shouted the lyrics, word for word, like a prayer.