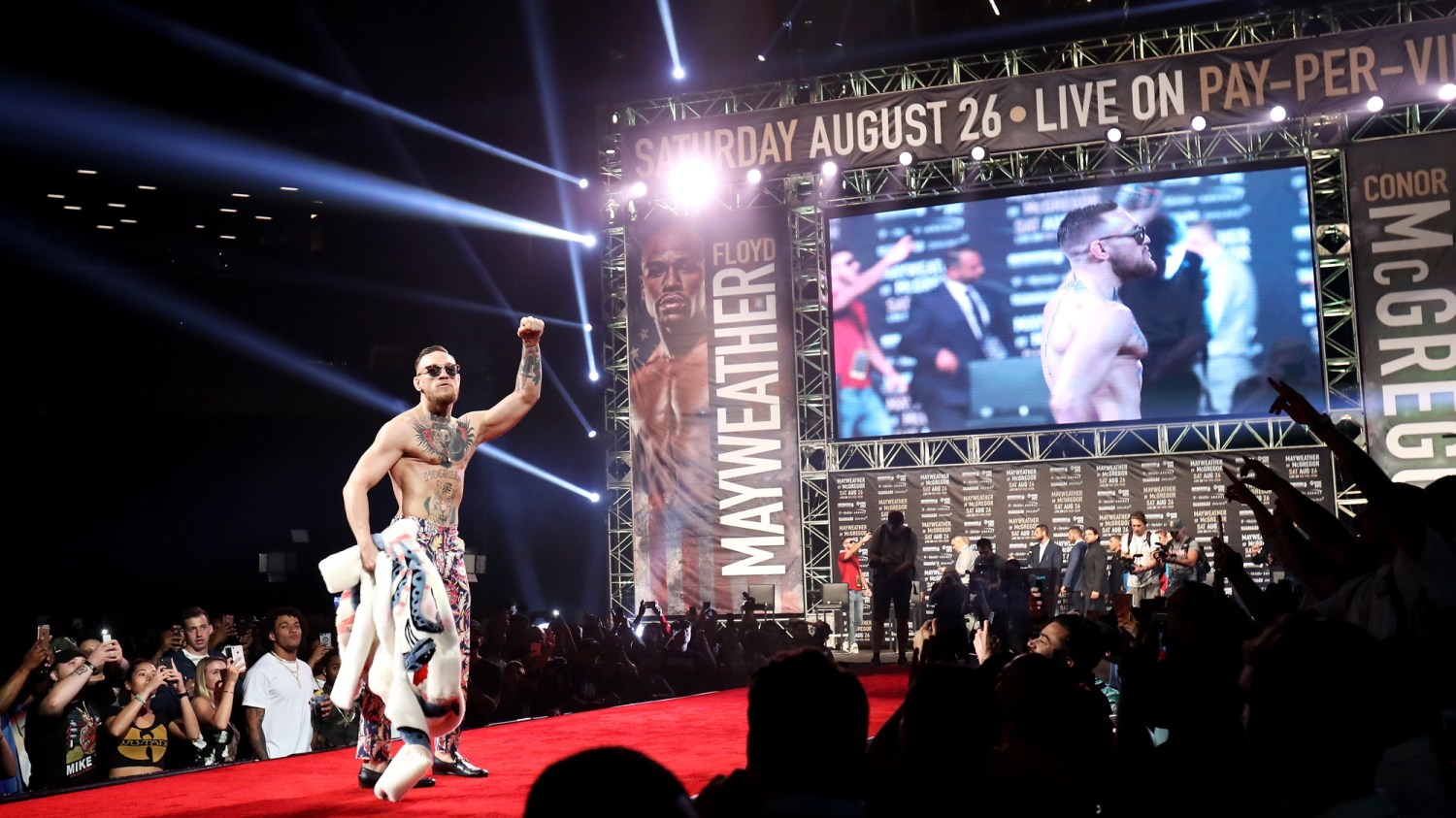 Conor McGregor and the shrinking power of the Great White Hope

Once a title that led to murder, it’s now a marketing ploy

Follow the unprecedented money and hype flowing to the upcoming match between ring great Floyd Mayweather Jr. and mixed martial arts star Conor McGregor and you quickly come to one of the most pernicious archetypes in boxing, if not all of sports: the Great White Hope.

Surely, fight fans no longer believe that the status of their race can be settled in the ring, especially in what looks like a colossal mismatch between an MMA star who has never boxed professionally and a man who has never lost a professional boxing match. Still, race remains a potent marketing tool in boxing, as it does in politics, entertainment and countless other endeavors.

There was a time, though, when a Great White Hope not only helped sell tickets but also stirred murderous passions.

The term came into wide use more than a century ago when renowned novelist and part-time journalist Jack London called on retired heavyweight champion and gentleman farmer Jim Jeffries to come out of retirement and wrest the title back from Jack Johnson, the first black man to hold the belt.

“Jeffries must now emerge from his Alfalfa farm and remove that golden smile from Jack Johnson’s face,” London wrote. “Jeff, it’s up to you. The White Man must be rescued.”

Jeffries had not fought in six years and was badly out of shape. But he answered the call, agreeing to face Johnson on July 4, 1910, in Reno, Nevada. The fight was billed “The Hope of the White Race vs. The Negroes’ Deliverer.”

“I am going into this fight for the sole purpose of proving that a white man is better than a Negro,” Jeffries told reporters before the fight.

Despite the high hopes attached to Jeffries, Johnson won the fight convincingly. He tagged and taunted Jeffries before knocking him out in the 15th round.

Johnson’s dominating victory came during the height of Jim Crow segregation, and it ignited deadly race riots across the country. A black fight fan in Houston had his throat slashed on a streetcar by a white man for the sin of being too loud about Johnson’s victory. On Manhattan’s West Side, a white mob set fire to a black tenement, then tried to block the exits. Black men were shot to death in Illinois, Virginia and Arkansas. In all, more than two dozen people, most of them black, died in the spasm of violence that followed Johnson’s victory.

Almost immediately, cities across the country banned film of the fight — the pay-per-view of its day — from being shown. Former President Teddy Roosevelt, himself an amateur pugilist, supported the film’s censorship and went on to call for a ban on prizefighting in the United States. With a black man now at the top of the fight game, the former president came to the realization that pro boxing fanned racial antagonism, bred corruption and encouraged gambling.

After the violence settled down, there were renewed calls for a Great White Hope to step up and win back the heavyweight crown, at the time the biggest prize in all of sports. The hope was finally fulfilled in 1915 when Jess Willard defeated Johnson. It would be another two decades before another black man got to fight for the heavyweight belt.

It was overtly racist business, but it also benefited Johnson, who earned huge purses for his battles against white opponents. He made upward of $100,000 for his fight against Jeffries, big money then. Before he won the heavyweight crown by beating Canadian Tommy Burns in 1908, white champions had avoided him for years. Despite that, Johnson also ducked other black boxers for the first five years of his seven-year championship reign. It was an unfortunate irony, but his rationale made sense for someone who fought for money: Squaring off against white boxers was simply much more lucrative.

The appeal of boxing’s Great White Hope to stir racial violence dulled over time, as the civil rights movement caused Jim Crow to slowly release its grip on society. Eventually, few believed that the standing of their race was on the line when black and white fighters battled for a championship.

Since the 1950s, the heavyweight division has been largely dominated by African-American fighters, including Muhammad Ali, who eventually became a beloved figure and cultural icon.

The most successful heavyweights over the past decade and a half arguably have been Wladimir and Vitali Klitschko, the brothers from Ukraine. No one is offering that as proof of anything other than their individual prowess.

Also, boxing is not what it used to be in the United States, although it remains popular internationally. Once one of the most popular spectator sports in the country, it now has a much narrower fan base. A large share of its audience is not native-born black or white, but immigrants who are not so invested in the nation’s long-running racial pathology.

And yet, despite all that, the notion of the Great White Hope has proven that it can still tickle tribal instincts and bring casual fans into the fold. That much was evidenced by the huge crowds and the “Fook Floyd” T-shirts, and by the Irish flag capes and American flags on sale as the fighters promoted their upcoming battle.

“Remember Gerry Cooney versus Larry Holmes?” said boxing analyst and former trainer Teddy Atlas, recalling the lucrative 1982 heavyweight bout in which (a reluctant) Cooney was widely embraced as the Great White Hope, only to suffer a TKO at the hands of Holmes. “Holmes was clearly the better, more talented fighter, but I know there was some extra interest driven to that because of race. I am sure that component is there again with Mayweather-McGregor.”

Today, the Great White Hope, which once carried life-and-death implications, has been reduced to a marketing ploy. The idea certainly generates interest, but the stakes are not anything like they once were. The idea that McGregor, 29, is a representative of the white race, or that Mayweather, 40, is representative of black people, feels laughable.

“Is it cynical? Yes,” said Todd Boyd, a University of Southern California professor who focuses on sports and popular culture. “Reality shows and celebrity TV defines America. People want spectacle, and they want it whenever they can get it — once a day or once an hour,” Boyd said. “I can’t take the fight seriously, but I like the show.”

Leonard Ellerbe, CEO of Mayweather Promotions, answered indirectly when asked about race as a selling point for the fight. “There is probably not an Irish man alive who doesn’t think Conor McGregor is going to beat Floyd Mayweather. And there are a lot Irish people in this world,” he said. “This is entertainment. This s— is big.”

During their four-city promotional tour for the Aug. 26 fight, McGregor embraced the role of Great White Hope with the enthusiasm— and sincerity— of a carnival barker. It was a ridiculous act, but he played it for all it was worth.

McGregor repeatedly crossed into racist territory, twice telling a strutting Mayweather, “Dance for me, boy.” In a playful late-night interview, he described Rocky III as the movie with “dancing monkeys in the gym.”

After commentators called him on his casual racism, McGregor took an even more outrageous turn. Feigning hurt from the stage at Brooklyn, New York’s, Barclays Center, he said he could not be a racist, because he is “half-black from the belly button down.” He then offered some hip-thrusting gyrations for “my beautiful black female fans.”

Offstage, McGregor brought the farce full circle, explaining to reporters that he has cosmopolitan sensibilities. “That does not sit well with me,” he said of being called a racist. “I am a very multicultural individual. I do not have any ill feelings toward anyone.”

Mayweather has been no slouch when it comes to delivering insults either. He has tossed the Irish flag to the ground and spiked his garden-variety vulgarities with misogynistic and anti-gay slurs.

The two fighters seemed to serve up the caustic words with a wink, signaling that they are merely toying with a combustible subject to get people to open their wallets. For them, the fight is not about black or white, but green.

Mayweather has said the ugly taunts amount to no more than “giving the fans what they want.” And if the fans want a Great White Hope, even one that has little chance to prevail, then he won’t be too offended.