Chuck Cooper III wanted his first pair of Converse basketball sneakers when he was around 8 or 9 years old. He saw an ad in the newspaper for the iconic Chuck Taylor All-Stars and asked his father to buy them for him.

It was only right that young Chuck had the same shoes that his father made history wearing in the NBA decades before.

During his childhood, Cooper III would hear all the stories and field all the questions about his dad, Charles “Chuck” Cooper, who on April 25, 1950, became the first African American to be drafted into the NBA after being selected by the Boston Celtics with the 13th overall pick. Cooper, who went on to play four seasons in Boston and another three with the Milwaukee/St. Louis Hawks and Fort Wayne Pistons, broke the NBA’s color barrier — and he didn’t do it alone. That same year, Nat “Sweetwater” Clifton was the first black player to ink an NBA contract, signing with the New York Knickerbockers, whom he helped reach the Finals during his rookie season. And on Oct. 31, 1950, Earl “The Big Cat” Lloyd suited up for the Washington Capitols to become the first African American to play in the NBA.

“Being the first, that can never be taken away from you,” Kevin Lloyd — son of the late Earl Lloyd, who died in 2015 at age 86 — told The Undefeated. “Every black player that came through the door, from Michael Jordan to LeBron James, it’s because of Earl Lloyd, Chuck Cooper and ‘Sweetwater’ Clifton. They’re the ones who kicked the door open.”

Back in the 1950s, Cooper, Clifton and Lloyd all also laced up Chuck Taylor All-Stars en route to changing the course of basketball history. Now, 70 years later, Converse — which prides itself on being basketball’s original brand, with a 100-plus-year history — will honor the legacy of these three men with the limited-edition Breaking Down Barriers collection, revealed Monday for the annual celebration of Martin Luther King Jr. Day. The collection officially drops on Jan. 23 on Converse.com and at House of Hoops.

“This new shoe collection will shine a spotlight on three pioneers and Hall of Famers — Chuck Cooper, Earl Lloyd and Nat Clifton — who changed the game of basketball forever by breaking down the NBA’s color barrier in 1950,” Cooper III told The Undefeated. He campaigned for his late father, who died in 1984 at age 57, to be inducted into the Naismith Memorial Basketball Hall of Fame, which he finally entered in 2019. Lloyd became the first of the trio to be inducted into the Hall in 2003, followed by Clifton, who entered in 2014 after he died in 1990 at the age of 67. “I always say their stories are little-known history. But just as the world knows about the great Jackie Robinson, they should also know about Cooper, Clifton and Lloyd. And I truly believe that this collection will go a long way in providing that recognition and appreciation.”

In partnership with the NBA, Brodrick Foster, the global product director for Converse Basketball, oversaw the design process and storytelling behind the Breaking Down Barriers collection, through which he and his team sought to answer a simple question: “As we’re heading into a new decade, how do we start to honor legends from back in the day?” Foster, who is African American, told The Undefeated. “The core of this story is really around three great men. … It struck home because these men were the first. And us being the first true basketball brand, it went hand and hand.”

The collection consists of six total pairs of sneakers, as Converse pays homage to Cooper, Clifton and Lloyd on two of the brand’s most classic silhouettes: the Converse Pro Leather and the Chuck Taylor 70, an updated model of basketball’s first performance shoe. Designed with premium materials and a satin finish to symbolize 1950s NBA uniforms, all three editions of the Chuck Taylor in the collection commemorate each barrier-breaking player, as well as their respective first teams.

Clifton’s blue, orange and white Knicks-themed Chuck features a bottle cap graphic behind the tongue of each shoe as a nod to his nickname, “Sweetwater.” Similarly, a cat graphic is printed behind the tongues of the black, green and white shoe, which honors both Lloyd, who was known as “The Big Cat,” and the Washington Capitols, a charter member of the NBA for only the 1950-51 season.

“My father was the first black man to lace up a pair of Converse and walk on the court. So this is special,” Kevin Lloyd told The Undefeated. Earl Lloyd, his son says, also served as a brand spokesperson for two decades. “My father is in heaven, looking down with a smile on his face, because he loved Converse. That’s all I had as a kid coming up. We had Converse hooking us up with pairs! That’s all I knew.” 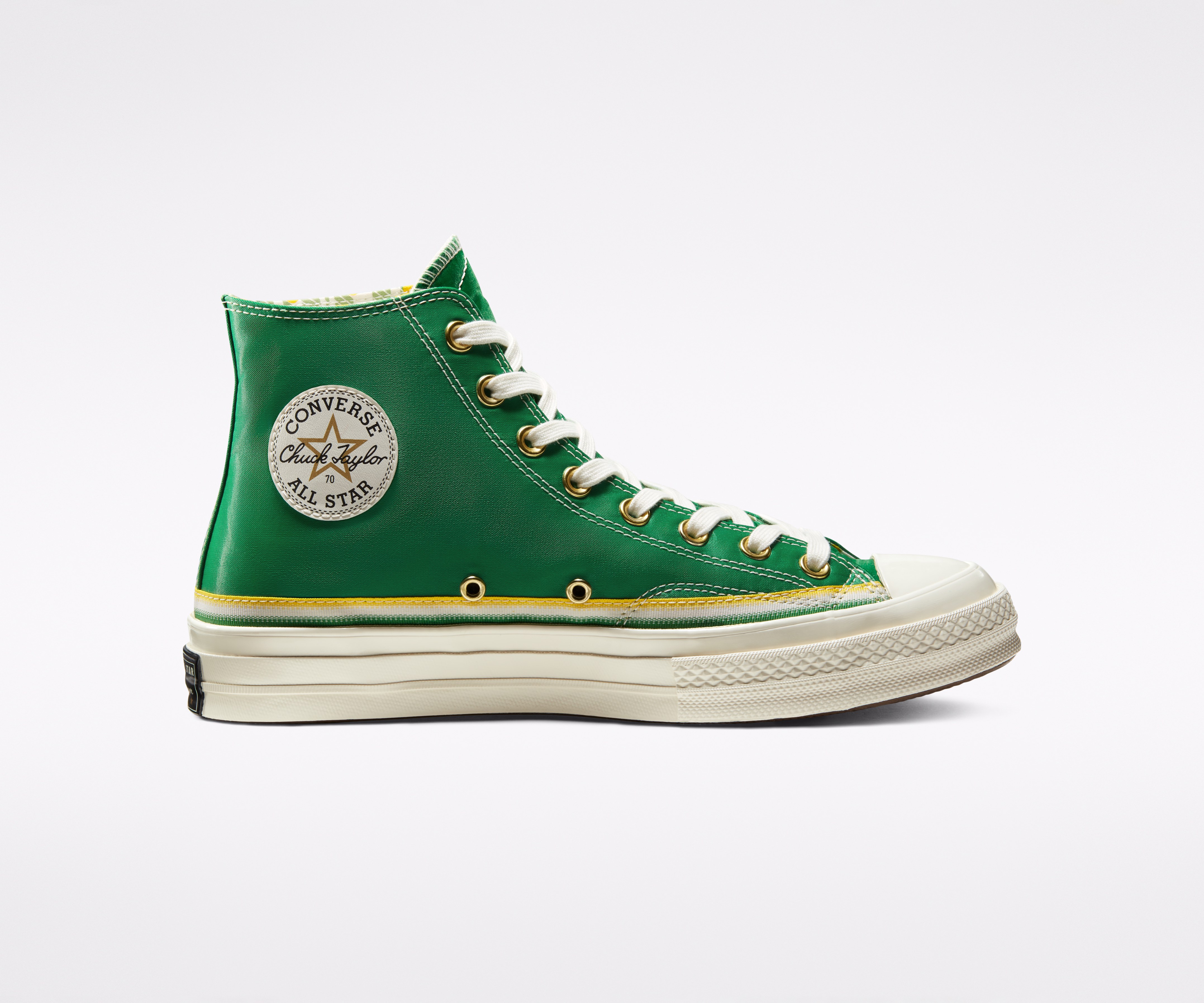 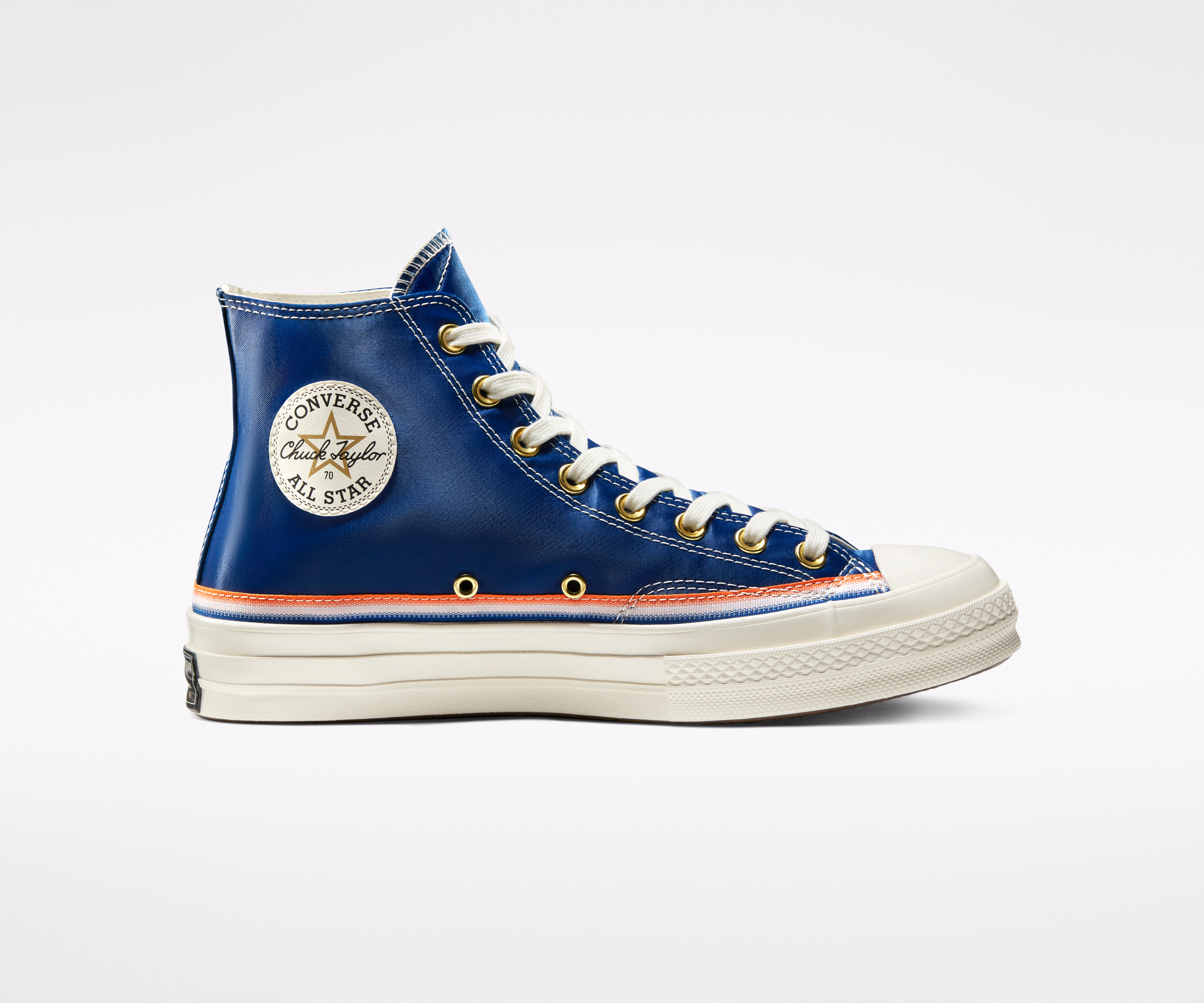 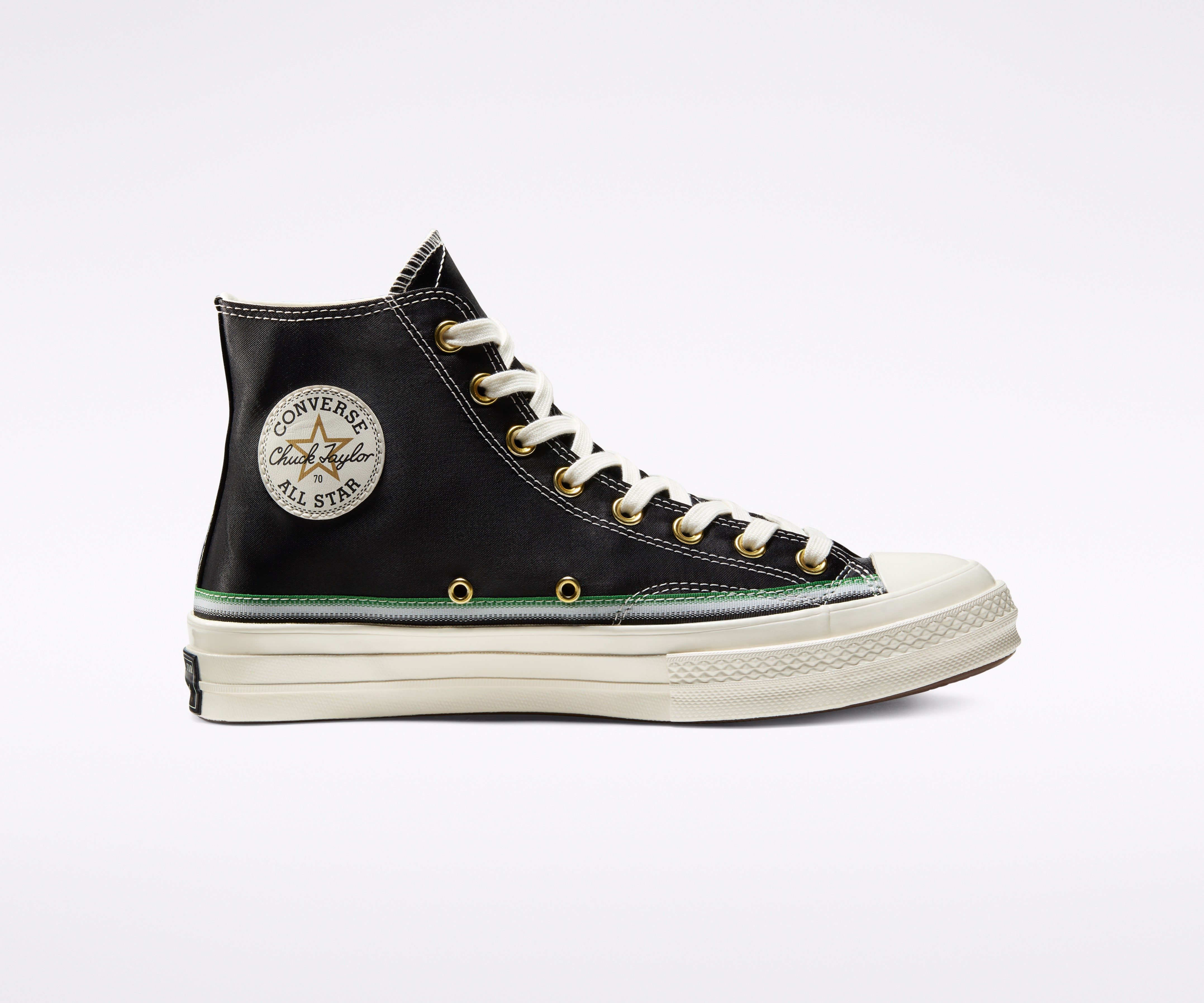 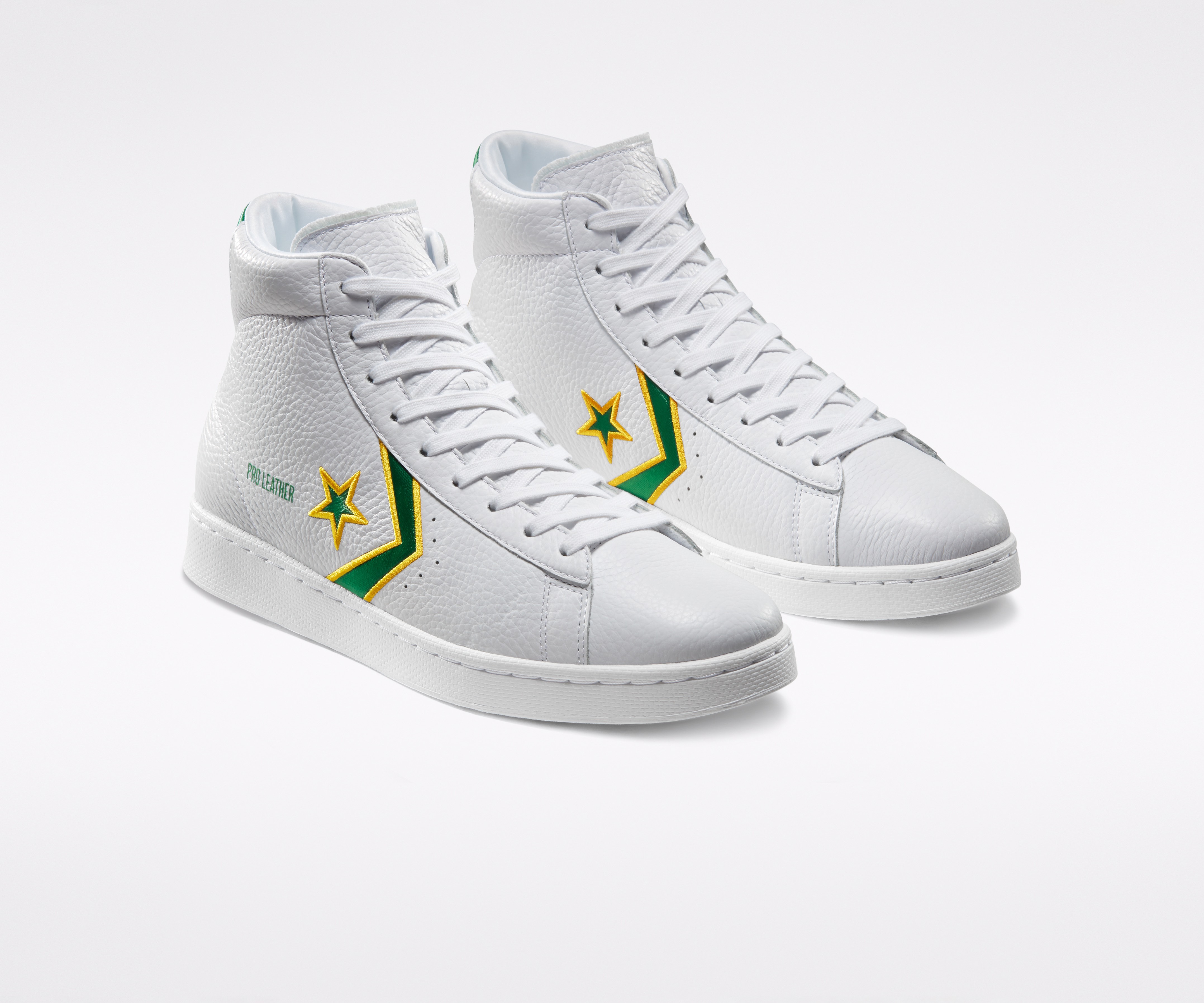 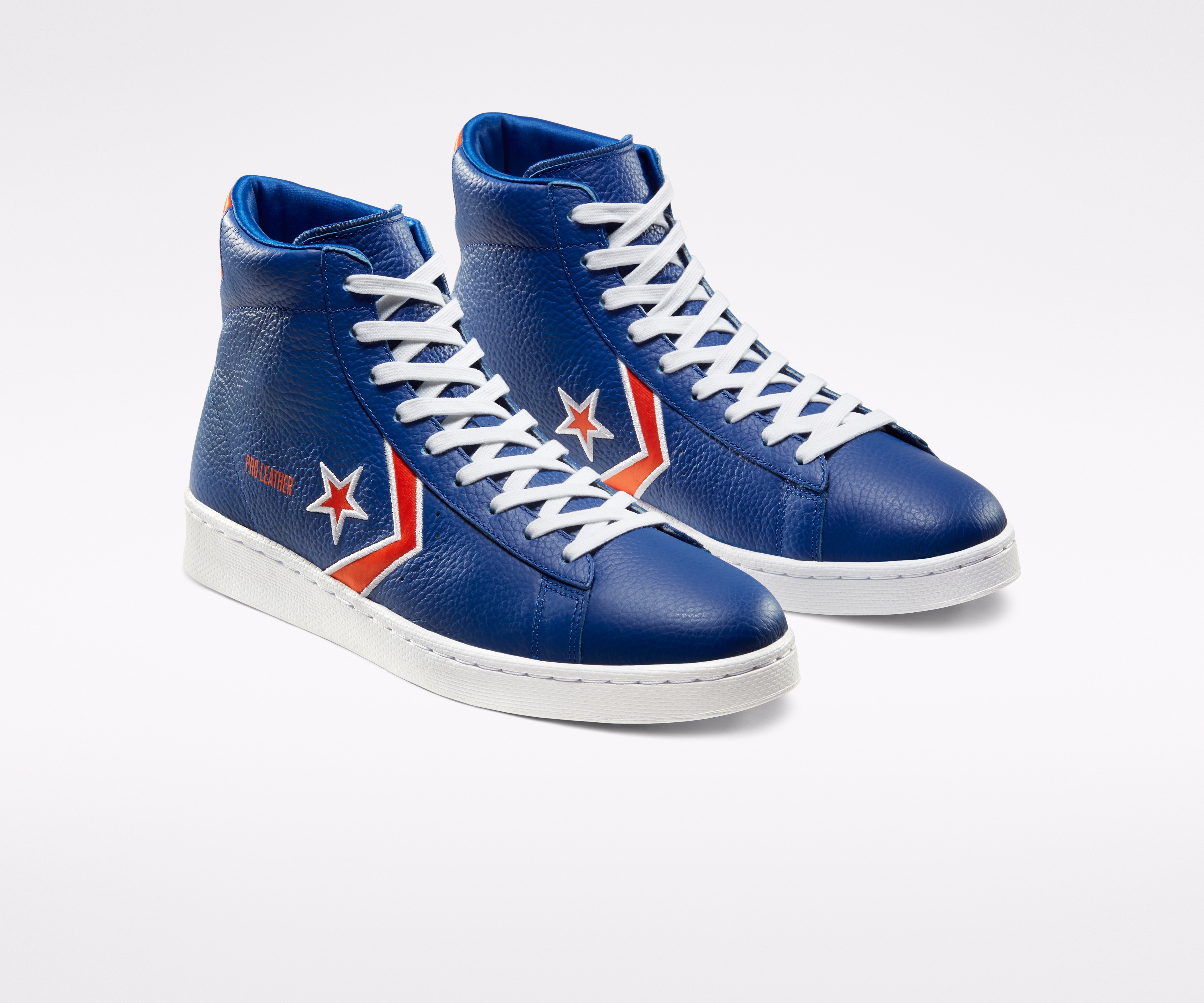 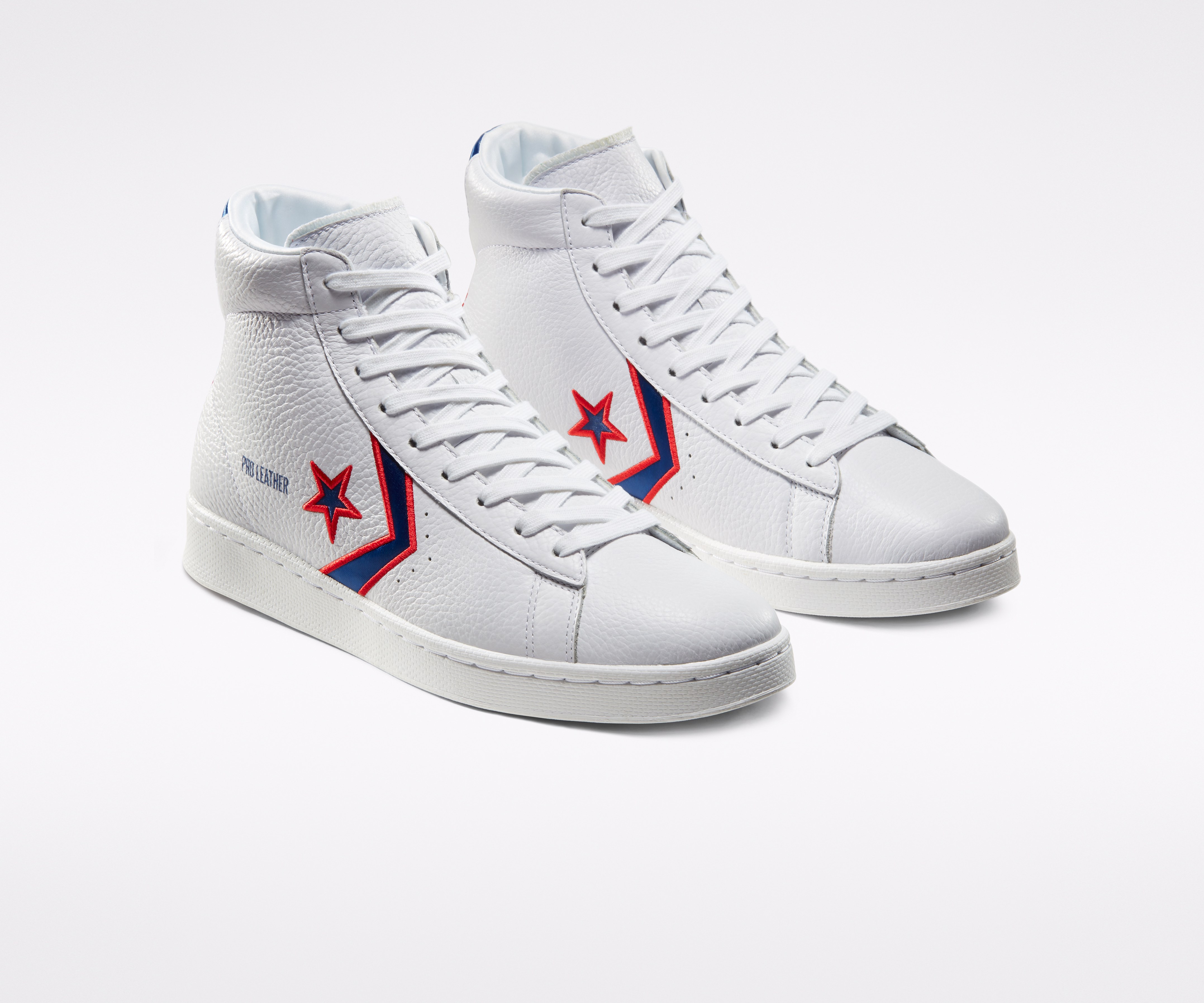 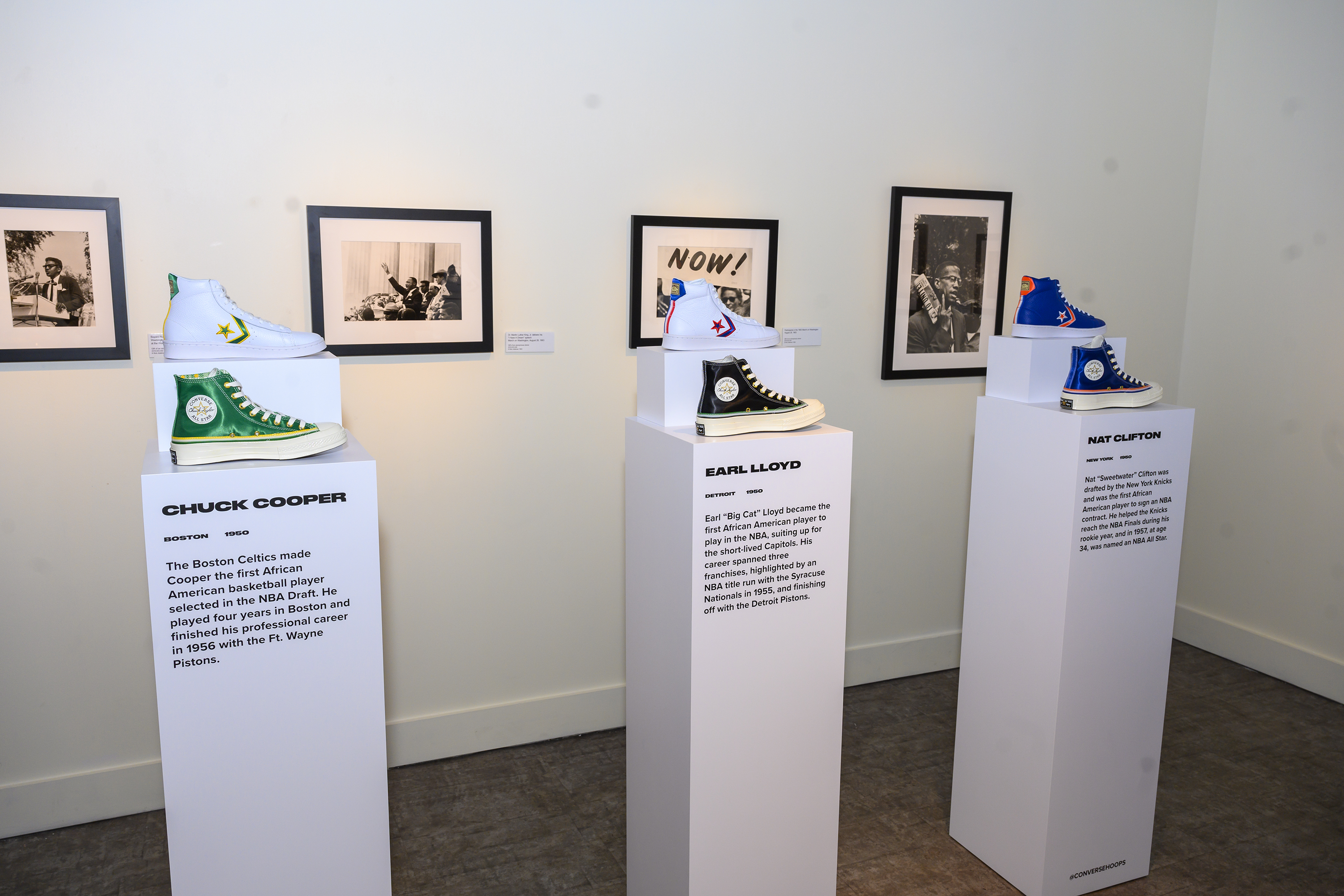 The green, yellow and white Boston Celtics-themed Chuck features a unique striped, plaid and polka-dot liner, inspired by the famous quote from Walter Brown, the team’s general manager at the time, after he was asked whether he knew his 1950 draft selection, Cooper, was black. “I don’t give a damn if he’s striped or plaid or polka-dot,” Brown exclaimed. “Boston takes Charles Cooper of Duquesne!”

Eventually, Cooper shared the story of that night with his son, Cooper III, who remembers how much respect his father had for the man who drafted him.

“He always affectionately called him Mr. Brown,” Cooper III said. “When Walter Brown stood up, said that and took a stand, ‘Boston takes Charles Cooper, the All-American out of Duquesne University,’ that officially broke down the barrier. My dad was always appreciative of that. A lot of people don’t know but back in those times, the NBA didn’t make a lot of money. The Harlem Globetrotters would barnstorm with the NBA and that game would draw a lot of fans. So the one thing my dad appreciated about Mr. Brown was that he took a major financial risk in selecting him and breaking up the monopoly that Abe Saperstein, the owner of the Globetrotters, actually had on the top African American talent in the world.”

Yet the most notable detail on each pair of Chucks dedicated to Cooper, Clifton and Lloyd is inscribed in the trademark “license plate,” which is unique to the Chuck Taylor 70 model. For the first time, Converse has replaced the classic “Chuck Taylor” script under “Converse All Star” on each heel of each shoe with different names — “Chuck Cooper,” “Nat Clifton” and “Earl Lloyd,” the three black men who broke basketball’s color barrier.

“It’s funny because ironically there were people who used to think that the shoe was the ‘Chuck Cooper,’ ” Cooper III said. “I can’t tell you how many times people approached me and would say, ‘Your dad has that shoe named after him.’ I’d say, ‘No, no. He doesn’t.’ So for it to come full circle, and now there is actually a Converse All-Star that has the name ‘Chuck Cooper’ on it is very, very special.”

On Monday in Memphis, Tennessee, Cooper, Clifton and Lloyd will be honored during an MLK Day game between the Memphis Grizzlies and New Orleans Pelicans. Beforehand, the families of each player received a private tour of the National Civil Rights Museum and the opportunity to see the Breaking Down Barriers collection for the first time. The moment marked the completion of Converse’s vision to remember the black men who paved the way for future generations of ballplayers, including Phoenix Suns swingman Kelly Oubre Jr., who is the current face of Converse Basketball.

“I think this collection tells the story of progress … I really do,” Foster, who’s worked at Converse for nearly a decade, said. “Where we are today looking at this great history, none of us knew about how these three guys went through trials and tribulations. And none of us knew that these were the guys wearing our shoes. So I hope there’s more of an emotional tie-in with people, and these shoes become collectors’ items. Especially for basketball enthusiasts who can just hang them up and say, ‘Hey, these were the sneakers that Charles, Nat and Earl wore.’ ”

Cooper III has seen the old photos of his father wearing Chucks during his playing days. He remembers that first pair his dad got him. Now, pairs of Chuck Taylors will bear their name, “Chuck Cooper,” alongside those with the names “Nat Clifton” and “Earl Lloyd.”

“I told Chuck, my pair is going in a showcase for sure,” Kevin Lloyd said. “I saw them and almost had tears in my eyes, thinking about what my father did for the game and how Converse is now saying, ‘Thank you.’”