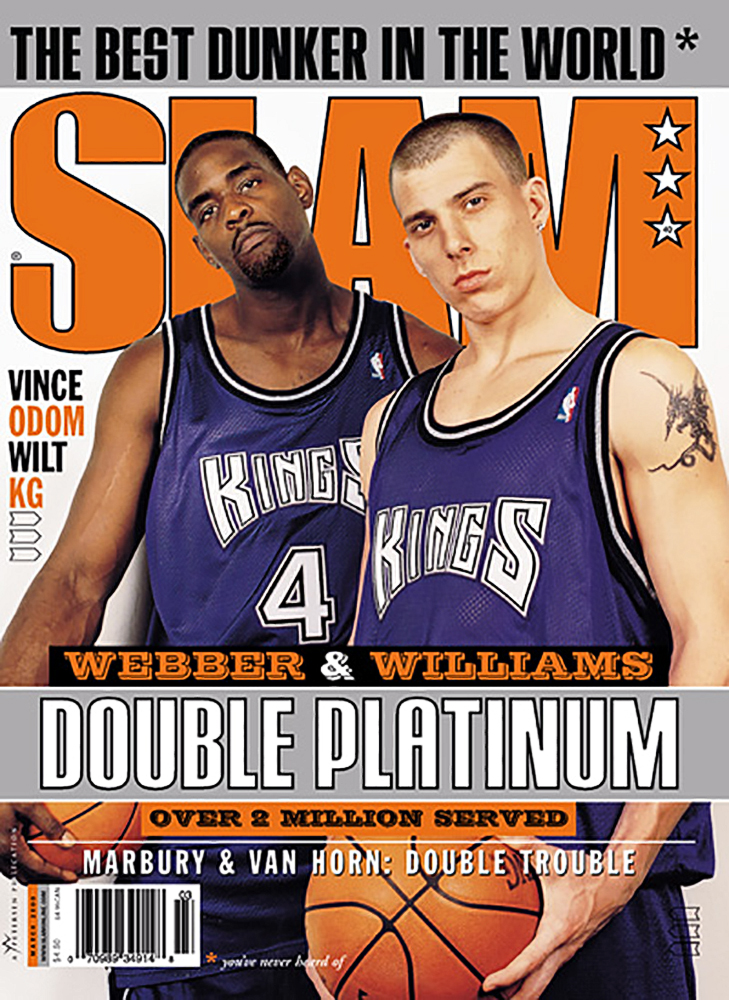 After nearly 30 months and over $530 million — including $255 million in public funding — the Sacramento Kings are finally set to play a regular-season game in the sparkly new Golden 1 Center in downtown Sacramento, California. It’s been described as “the highest-tech stadium” in sports, and is seen by many as the result of prudent work by new team owner Vivek Ranadive and Sacramento Mayor Kevin Johnson, a former NBA player. However, the luxurious new building may be the anthesis of the hard work by another pair of saviors in Sacramento, nearly two decades ago.

They arrived to the team nearly a month apart — Chris Webber through trade in May 1998 and Jason Williams as the No. 7 overall pick in the June 1998 NBA draft. Webber would soon become the face of the franchise, and along with Williams and veteran center Vlade Divac, usher in an era of prosperity the likes of which the franchise had never seen.

“[The Webber-Williams era] kept the Kings alive and, in this town, very relevant. It certainly did not hurt the efforts of getting a new building.” said Kings play-by-play announcer Grant Napear. He’s been with the Kings since 1988, when they opened their previous arena, and recalls when the SLAM Magazine cover was published. “The Kings were so good back then and so entertaining. It carried the Kings through their dark years.”

C-Webb and J-Will were steely, cold badasses who would stare you down and cuss you out after a vicious crossover or a nasty dunk.

Napear is not alone in that estimation. “The rampant success during that stretch gave the pro-arena groups lots of material to work with,” said Tom Ziller, editor of famed Kings blog Sactown Royalty. Ziller and his site, along with local radio host Carmichael Dave, helped push the Here We Stay movement, a public uprising largely credited with saving the Kings from relocation to both Anaheim, California, and Seattle in the 2010s.

“It was mind-boggling,” Napear said. “We went from the dregs of the NBA to really the media darlings of the NBA — almost overnight.”

For many, the Kings’ first true dose of national attention was the cover of Sports Illustrated’s Feb. 19, 2001, issue, but Sports Illustrated was actually beaten by a full year: The then less-heralded duo of Webber and Williams graced the March 2000 cover of SLAM. The publication, launched in 1994, and originally dubbed “The IN YOUR FACE Basketball Magazine” meshed basketball and hip-hop culture and became the hoops world’s answer to VIBE, and The Source, in the mid-’90s and 2000s. SLAM was part of Harris Publications, which owned XXL, and both publications had a polished and aggressive spirit.

“Williams and Webber was just a fun duo — a natural for SLAM,” said then SLAM Editor-in-Chief Russ Bengtson. “They could both pass, they could both shoot, and that Sacramento Kings squad looked like they’d be tons of fun.”

While the Sports Illustrated cover depicted the Kings stoically, with a glow surrounding them, the SLAM cover had attitude. Shot by photographer/director Jonathan Mannion, famous for shooting Jay Z, Nas, OutKast, Lil Wayne, Run-D.M.C., Drake, Kendrick Lamar and so many iconic hip-hop artists, he was also known for photographing athletes such as LeBron James, Kevin Garnett, Stephon Marbury and Dwyane Wade.

Webber towered behind Williams, head cocked and face in a scowl. All fun and games on the court, here Webber is mean-mugging, with a vein bulging through his bicep. Williams, by contrast, is doe-eyed, with a diamond stud hanging from his ear. The cover had a certain hip-hop feel, a grittiness that popped. C-Webb and J-Will were steely, cold badasses who would stare you down and cuss you out after a vicious crossover or a nasty dunk.

“It was mind-boggling … We went from the dregs of the NBA to the media darlings of the NBA — almost overnight.”

It was just Bengtson’s second issue as SLAM’s editor-in-chief. “If I remember correctly,” said Bengtson, who now serves as a senior editor at Complex Media, “the shoot would have been before that season even started. We got lucky. [There’s] nothing like the print lead time — days of hoping someone didn’t get hurt or traded, or decide to suck in the two or three months between the interview and when the issue came out.”

Ultimately, it was the 2-15 start of the season for the Marbury and Keith Van Horn-led New Jersey Nets that landed the Kings duo the cover. “The initial thought was a regional split, with Williams and Webber on the West Coast [cover] and Marbury and Van Horn in the East,” said Bengtson. “If you look in that issue, there is a Keith and Steph piece in there — that I wrote — but they got bumped from the cover because the Nets had a terrible start.”

Williams was revered both in the locker room and in the community of Sacramento, but in 2001 was traded to the Vancouver Grizzlies for Mike Bibby, who would go on to become a Sacramento cult hero in his own right. Then the Kings tragically peaked during the controversial 2002 Western Conference finals against the Shaquille O’Neal and Kobe Bryant Los Angeles Lakers. They lost the infamous Game 6 in Los Angeles, which caused Webber to say years later that “something smelled weird about the whole situation.” The Kings then lost a heartbreaking Game 7 at home in overtime: Webber, despite a reputation for sometimes shrinking in big games, nearly dropped a triple-double — 20 points, 11 assists and eight rebounds. The franchise has never reached another conference finals.

A knee injury for Webber ended the Kings playoff run the next year — and effectively ended his peak as a superstar. Williams has settled in Florida with his family, but pops up from time to time, still breaking ankles for YouTube in random pro-am games. He’s yet to make his return to Sacramento — after being scheduled to do so in 2014 — and his iconic No. 55 jersey hasn’t been retired. Now may be as good a time as any to do so. And Webber is of course an analyst for TNT and NBA TV. In 2009, the Kings retired Webber’s No. 4. “Those memories of mine, the best moments I’ve had in my life, they were here,” Webber said during the ceremony. “If there’s anything I’m proud of, I’m glad I helped put Sacramento on the map.”

Bansky Gonzalez is a Sacramento-based writer currently attending California State University, Sacramento. He's always down to defend LeBron James or Young Thug's legacy against whoever, whenever and wherever necessary.