The poster for the 1995 film ‘Dead Presidents’

Happy Halloween — there were actually three 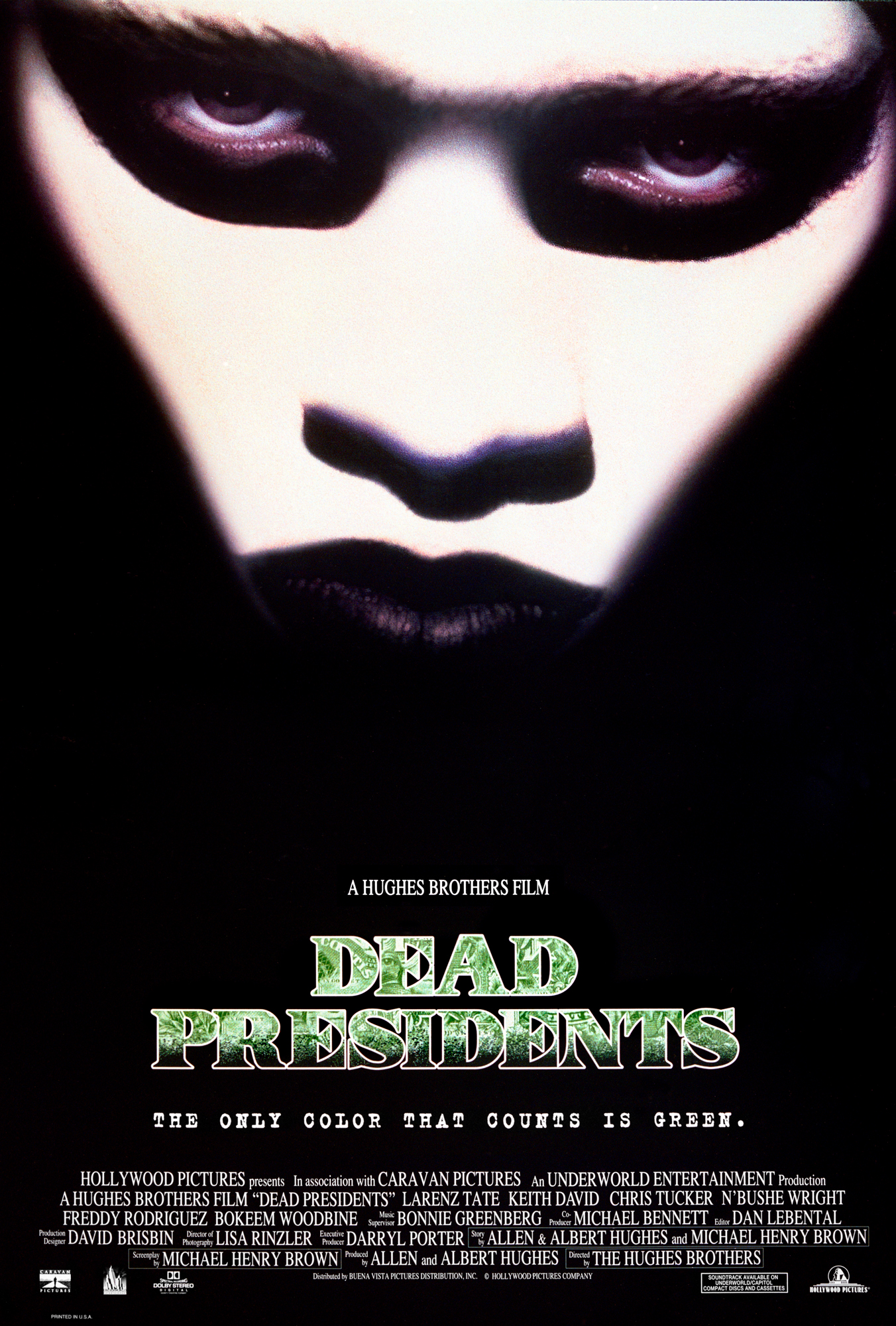 “Ask not what your country can do for you, ask what you can do for your country.” Former President John F. Kennedy’s one-liner, from his 1961 inaugural address, was an armed forces recruiter’s dream. But for many of the young men who enlisted and ended up serving during the Vietnam War’s escalation years, they were simply cannon fodder. And when they returned home, many black veterans felt abandoned by the U.S government again — especially under then-President Richard Nixon’s “benign neglect” policy. “Once a Marine, always a Marine” is the motto, but how much weight does that hold if the country you risked your life for doesn’t value your life? What options are you left with when your country forgets your service? All three posters for Dead Presidents, Albert and Allen Hughes’ follow-up to their stunningly nihilistic 1993 debut, Menace ll Society, reflect the grim outcome of those choices.

In 1969, Time magazine’s Wallace Terry began recording conversations between black soldiers. “What they been through in the bush, plus what they have to go through back in the world [America], they can’t face it,” one soldier said of his counterparts. These vignettes motivated Terry to write 1984’s Bloods: An Oral History of the Vietnam War by Black Veterans. The book included the story of Ari Merretazon (born Haywood Kirkland), who was imprisoned for his role in the 1969 Washington, D.C., robbery of a mail truck carrying $382,000. By 1995, the Hughes Brothers, then 23, were using the story as inspiration for Dead Presidents.

Looming above the title and tagline (“The Only Color That Counts is Green.”) are faces obscured by the iconic black and white paint.

Released in October 1995 between the announcement of O.J. Simpson’s not guilty verdict and the first Million Man March — Dead Presidents is a war movie, a coming-of-age tale and a heist flick in one. Naive Bronx, New York, teen Anthony Curtis (Larenz Tate) tells his friends, Skip (Chris Tucker) and Jose (Freddy Rodriguez), that he wouldn’t mind enlisting because he wants to do “something different” with his life. He speaks of Vietnam as if it’s some postgraduate trip abroad, but the four years he spends there — his de facto collegiate experience — leave him psychologically fractured. His friends fare no better. With all of them down on their luck, they plan a doomed robbery with Cleon (recent Emmy nominee, Bokeem Woodbine), their unhinged fellow vet-turned-crooked preacher, and Delilah (N’Bushe Wright), the radical younger sister of Anthony’s estranged girlfriend, Juanita (Rose Jackson).

The film’s posters bear powerful images. Looming above the title and tagline (“The Only Color That Counts is Green.”) are faces obscured by the iconic black and white paint. They speak to what the main characters became: casualties of war.

Menace ll Society seared a number of scenes into the minds of viewers — the robbery, a moment of retribution, the interrogation — but it has no defining image. No symbol. Dead Presidents, on the other hand, has an unmistakable one. Even if it’s as a Halloween costume, as Floyd Mayweather exhibited last year, the face from the posters has survived over two decades. You can’t avert your eyes while it glares right through you.

“There’s two posters,” said Allen Hughes, the Pomona, California, by-way-of Detroit, director who also made 1999’s American Pimp, 2001’s From Hell and 2010’s The Book of Eli with his brother, Albert, before helming 2013’s Broken City solo. “The teaser poster, which is the cleaner and better of the two, is just the face. That’s Larenz. In the one hovering over the guys, that’s Larenz, as well.”

In the second poster, the face is more ominous. A scowl replaces the blank stare as it hangs above a table where Tate’s character sits with Kirby (Keith David), Skip and Jose around piles of money. “We took set stills of the planning of the heist, and [of] the post-heist money,” Allen Hughes said. “The unit set photographer had taken pictures and they just [put them together].”

As a Halloween costume, as Floyd Mayweather exhibited last year, the face from the posters has survived over two decades.

These two images were also used as the covers for both volumes of the film’s soundtrack, brilliant and top-selling collections of 1960s and ’70s classics from the likes of James Brown, Sly and the Family Stone, and Allen Hughes’ favorite artist, Curtis Mayfield. While recalling the soundtracks, Allen Hughes also remembers a third poster.

“There’s [one] they did with just N’Bushe Wright,” he said of the poster featuring Delilah, gun and head pointed upward.

The constant in the posters is the face, although it’s not truly Tate or Wright beneath that face paint. It’s not Anthony or Delilah, either. All humanity is erased. But even so, it is the face that is forever associated with Dead Presidents — alluring in its dead-eyed gaze.

It’s eerily similar to the face of Pazuzu, the demon tormentor from The Exorcist, but Allen Hughes said the face paint’s style can be traced back to the war. “We got the idea from the Vietnam War protester paint,” he said. “These students or youths used a primitive form of the Dead Presidents face paint, then we got a hold of it. I’m obsessed with iconography — one image can be as powerful as a great record.” According to Allen Hughes, the cultural impact of the poster was instant — most likely due to the proximity of the film’s release to Halloween.

“With Dead Presidents, the imagery really landed hard with the culture,” he said. “I remember getting pictures [of people dressing up in character] and seeing Puffy [Sean Combs] go out with his crew that year, and every year it just gets bigger and bigger.”

It was a brilliant marketing decision, but like many other elements of Dead Presidents’ production, it was made in haste. When other directors started incorporating elements of the film’s marketing plan into their work, the Hughes Brothers were forced to get creative. According to Allen Hughes, a popular director he and his brother were friendly with at the time was the catalyst for switching the marketing and distribution focus from the war to the crime. “I told him that we were going to make this black Vietnam movie, and I was going to take Kool & the Gang’s ‘Jungle Boogie’ and put it in a trailer and it was gonna be insane,” he said. And sure enough, before the Hughes Brothers could get Dead Presidents into preproduction, Hughes said this director promoted his critically acclaimed film in 1994 using the same song. “It went all the way to the Oscars,” he added.

Hughes declined to name the director, but it’s worth noting that “Jungle Boogie” appears halfway through the trailer for Quentin Tarantino’s Pulp Fiction and in the film’s second scene. The 1994 genre-bender was nominated for seven Oscars, and Tarantino and Roger Avary claimed the award for best original screenplay in 1995. In hindsight, it was a blessing in disguise for the Hughes Brothers: It forced them to create something distinct for Dead Presidents’ promotion. They switched the angle to the heist, making the face paint the cornerstone of the poster.

“It was already baked into the movie, but I was thinking about how we could separate ourselves and have the impact with the public by showing something interesting and different that would get people’s attention,” Allen Hughes said.

The face is Dead Presidents’ legacy. “The imagery and the soundtrack supercede the film, and I’m OK with that,” he said. “Once we made the pivot to that iconic face paint, I was obsessed with getting that perfect because I knew it would stand the test of time.”

None of the characters really came home from the war. They were zombies: dead men roaming the earth on borrowed time. The posters carrying Dead Presidents’ contribution to pop culture represent the desperation of people stripped of their humanity by war, and the ghosts they became during the aftermath.

Julian Kimble is a Howard University-educated writer who has also written for The Washington Post, Billboard, Complex, MTV News, Pitchfork, and Gawker, to name a few. His range is unlimited.