“I know I’m old, youngblood, but you wanna switch sneakers? … You sure you don’t wanna switch?”

NEW YORK — Uncle Drew had the shoes before Kyrie Irving. Well, sort of. By now, it’s no secret that Irving, the five-time All-Star point guard for the Boston Celtics, is portraying a 70-year-old blacktop basketball legend still capable of saucing up any young’un in his lane. The character is the star of the self-titled summer hoops flick Uncle Drew, which hits theaters Friday. Also releasing with the film are the “Uncle Drew” Kyrie 4s — the latest edition of Irving’s most recent signature Nike sneaker.

The Kyrie 4s dropped last winter, with Irving wearing them for the first time on NBA hardwood in the “Confetti” colorway during a game against the Utah Jazz. But in reality, he debuted the shoes in character while shooting Uncle Drew months before their Dec. 16, 2017, retail release.

“We wanted somebody from the movie to leak it.”

“It was a bit tricky,” said costume designer Johnetta Boone, “incorporating the Kyrie 4 into the film.” Boone has also worked on the OWN series Greenleaf, as well as films such as Cadillac Records (2008) and Tyler Perry’s For Colored Girls (2010).

Capturing the kicks on camera, Boone said, was originally intended by the production staff and studio as a strategic yet secretive instance of branding and product placement. The sneaker world, however, would quickly become aware that a new Nike Kyrie was coming. On Sept. 6, 2017, one of the main characters in Uncle Drew — Hall of Famer Reggie Miller, who plays the spec-wearing yet sharpshooting Lights — posted a picture on Instagram of his castmate Irving in full costume and makeup. Looking at the photo, it’s hard not to shift your eyes downward to the hooper/actor’s feet and marvel at the sight of what was at the time a never-before-seen pair of sneakers. 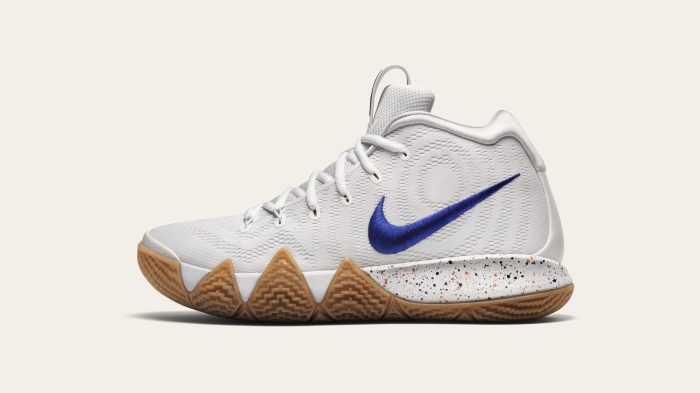 The shot was quickly cropped to show as many details of the shoes as possible, and it went viral on sneaker websites. News stories reached Tony Grosso, a senior product line manager for Nike Basketball, all the way across the globe while he was in China on business. His reaction to the image of Irving’s next shoe prematurely hitting the internet?

“We wanted somebody from the movie to leak it,” said Grosso on Wednesday during a preview of the Uncle Drew apparel and shoe collection at Nike’s New York headquarters. He added that the brand itself had planned on discreetly surfacing its own image to create a buzz around the shoe, but it ended up being Miller. “I saw that he posted and was like, ‘Oh, cool, that’s our leak‘ … but it wasn’t the Nike leak.” Miller quickly removed the photo from his account.

When the character of Uncle Drew first came to life in a collection of short films as part of a genius ad campaign devised for Pepsi Max, Irving didn’t yet have his own signature shoe.

“He got hospital shoes on!” Uncle Drew joked about one of his defenders at the Clark’s Pond Courts in Bloomfield, New Jersey, during Chapter 1 of the series, which was released online in May 2012. Back then, Irving, both as himself and his older alter ego, donned player-exclusive pairs of Nike Hyperdunks on the court. His first signature, the Nike Kyrie 1, wouldn’t drop until 2014, and Uncle Drew didn’t wear the shoe until Chapter 4 of the saga, which reached the web in mid-November 2015. Around the same time, Nike and Pepsi collaborated for a super rare promotional release of “Uncle Drew” Kyrie 1s, which were packaged in a special-edition mini locker that included additional swag, such as a bobblehead and hoodie. Only 150 pairs were made, and they can be found on StockX for a resale price of a whopping $4,400.

“The colors were based on the studio. They presented us with a palette that was all around their marketing materials. We saw the van … a bunch of the posters … and the iconography they were going to utilize,” Grosso said. “That orange and blue really stood out. The blue connects to Pepsi, and the orange connects to the jerseys of the Harlem Buckets.”

For most of the film, Uncle Drew complements his trademark Nike sweatsuits with Irving’s previous model of shoes, the Nike Kyrie 3. It’s not until the opening game of the 50-year anniversary tournament at Rucker Park that he laces up the Kyrie 4s.

“That orange and blue really stood out. The blue connects to Pepsi, and the orange connects to the jerseys of the Harlem Buckets.”

“That was absolutely intentional because the Kyrie 4s were so new and specific, we wanted to make sure that when they were unveiled, it was during the tournament,” Boone said. “It indicated that he brought out that special shoe for him to make his best moves on the court.”

Yes, all the moves employed by Uncle Drew in the film are the work and skill of the then-25-year-old NBA point guard. That meant Nike had to deliver Irving, one of its top athletes, a finished product of the Nike Kyrie four months before the shoe’s scheduled release so that every jab, spin, burst, drive and jump he took would be supported from a footwear standpoint.

“We knew that Kyrie was going to play full speed in the movie. We needed to make sure that it was the actual shoe for him, not just an early-round sample,” Grosso said. “We knew he was going to be in it so much, so we worked hard to get it done and wanted to do right by the kid. He was gonna film for six, eight, 10 weeks — whatever it was. We wanted to make sure he had the right product. It was a lot of work, but we made it happen for him.”

Irving and the Nike Kyrie 4 ultimately proved to be the perfect combination, as Uncle Drew would wisely advise, to “get buckets” on the silver screen.