Plus, she’ll take heels over sneakers any day

Self-made millionaire Draya Michele is a designer, actress, mother and soon-to-be wife. She made her first impression on the public on VH1’s Basketball Wives, but her lasting impression has become that of a businesswoman. Andraya Michele Howard turned a $12,000 dream into a reality when she launched swimwear line Mint Swim, a “swimwear line designed with all shapes and sizes in mind.” Mint, with big nods to Michele’s on-screen stardom and a social media community of close to 10 million, exploded with more than $1 million in sales in 2015.

“It’s difficult to start any type of clothing line, because your head is filled with a bunch of ideas,” said Michele. “You want to make something that you love, but then there’s a fear that everyone else isn’t going to love it.” It’s safe to say that Michele is past that fear, with six successful swimwear summers under her belt. She’s launched two more apparel lines: Fine Ass Girls and Beige & Coco. “Fine Ass Girls is streetwear,” she said. “Beige & Coco is a little more sophisticated, and matches how I’m growing up as well.”

But it doesn’t stop there. Michele is starring in two films opening this month. Opposite Columbus Short and Vivica A. Fox, Michele is a drug lord’s ex-lover in True to the Game (Imani Motion Pictures). It’s based on the best-selling Teri Woods trilogy. And on Sept. 29, Michele portrayed a waitress in the nationwide premiere of ‘Til Death Do Us Part (Novus Content/Footage Films), a thriller starring Taye Diggs.

While Michele got her hair and makeup spruced up before slipping into a delicate Chanel lace top for an afternoon in New York, she talked about her fiancé, Dallas Cowboys cornerback Orlando Scandrick, getting acting advice from Jill Scott and more.

What advice would you give your 15-year-old self?

Don’t have a baby until you get married.

What’s your favorite memory from growing up in Pennsylvania?

I hated the snow growing up, but now that I live in L.A., I miss the snow and I realize just how beautiful it actually was.

Last song you listened to?

First concert you ever went to?

Last stamp on your passport?

What made you try out acting?

Living in Los Angeles, it’s just something that you end up trying. If you’re good at it, you keep doing it, and if not, you move on from it. It’s not easy, but I was really determined to try.

What acting advice have you received?

I took a big piece of advice from Jill Scott. I asked her about acting classes, and she told me how important they’ve been for her.

What does ‘self-empowerment’ mean today?

To me, it means being your own boss and making decisions for yourself. I do that every day.

Who is your Super Bowl pick?

What is your demeanor when you’re watching your fiancé on the field?

Every time Orlando plays, I get nervous. I’m quiet until something big happens.

What was your first date with Orlando?

We went out for ice cream. It was important to me to see him during the day outside of a low-lit restaurant or movie. I wanted to get the real version of him.

How have you two grown together?

Besides raising [four] kids together, we are best friends. I learn from him and he learns from me. He’s taught me so much about finances. … I’ve become more financially responsible.

Why did you choose to put your toddler on a vegan diet?

I wanted to make sure he wasn’t exposed to growth hormones that are in [some] foods and give him the opportunity to reach his natural growing infant and toddler size. We prepare his food fresh every day. I’ll start introducing different animal proteins at age 3, and of course they’ll be hormone-free.

What sports do your kids play? 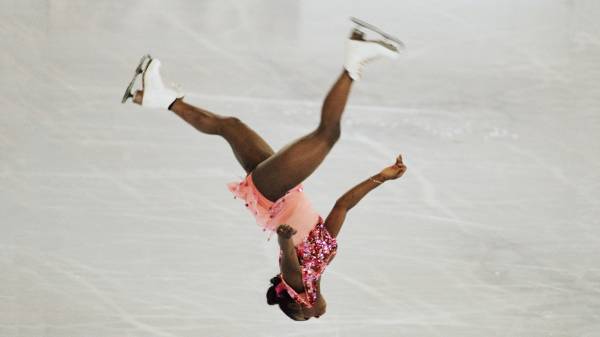 I used to be an occasional gym rat whenever I felt out of shape. But once I got pregnant, I needed to make it part of my regular routine. I wanted a hobby that was constructive, so I started going to the gym. I love all cardio-type workouts. Cardio helps me burn off fat and reach my goals.

Tell us about your partnership with Headbands of Hope.

For every headband purchased, one headband is given to a child with cancer. I go to the Children’s Hospital in Los Angeles and give out headbands to the sick children there. A lot of them are going through chemotherapy. You can’t help their health conditions, but you can help their attitude. And it really brightens their day, as it does mine.

Gianina Thompson is a contributing writer for The Undefeated. Since grabbing kicks for Allen Iverson back when she was a 16-year-old Foot Locker sales associate, being part of how sports meshes with entertainment and impacts culture has been a driving force for her ever since.