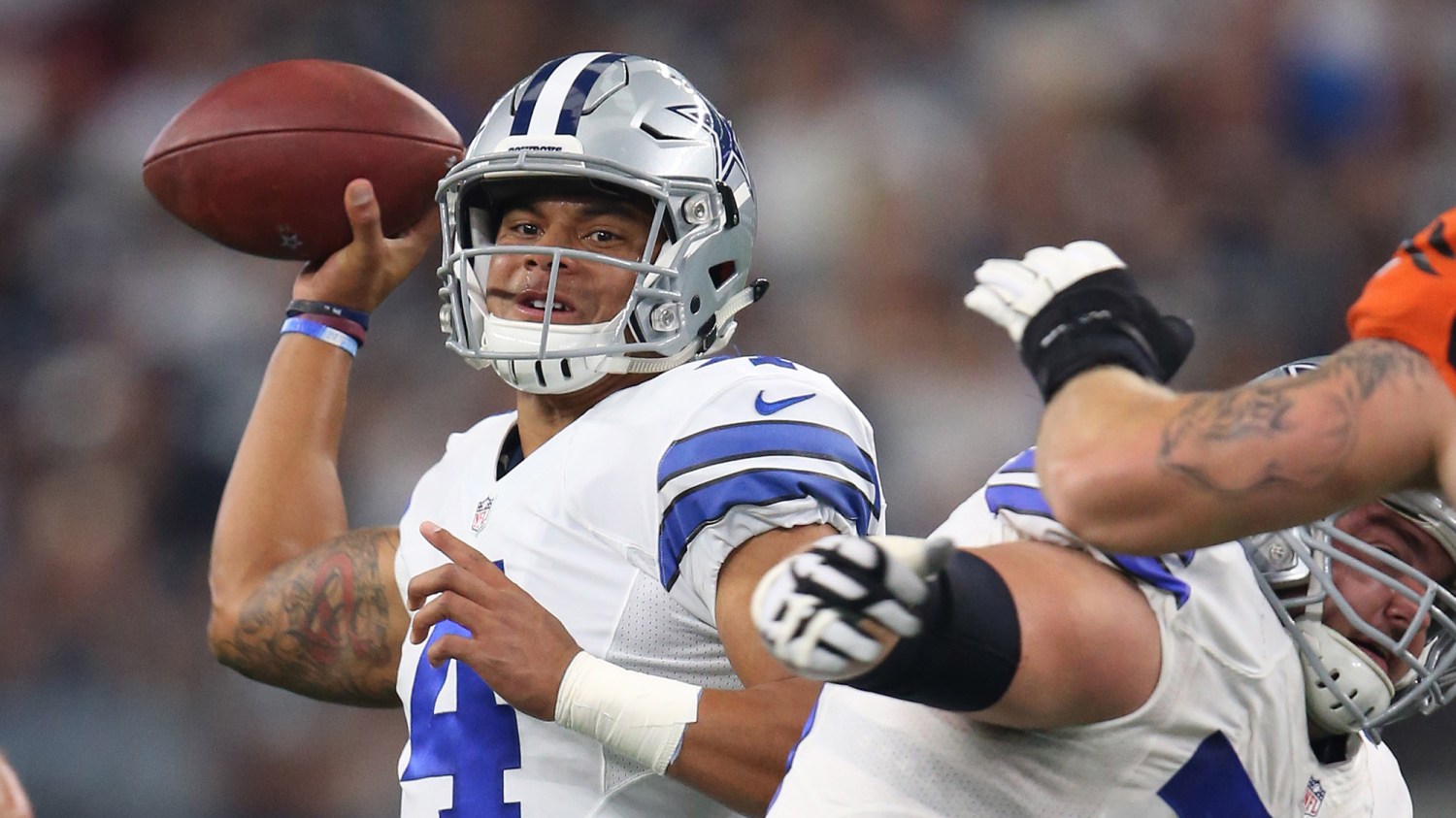 The evidence is in and it is overwhelming. The Dallas Cowboys would be making a Texas-sized mistake if they pulled Dak Prescott as starter, regardless of Tony Romo’s status. Prescott would just be making make another compelling argument Sunday night. If the NFL’s best rookie to this point engineers a victory over the visiting Philadelphia Eagles, owner Jerry Jones would be downright loco to mess with the best thing to happen to his franchise in a long, long, long time.

The NFC East leaders have responded to the efficient, poised-beyond-his-years youngblood better than any Cowboys fan could have possibly envisioned after the team serendipitously drafted Prescott with a fourth-round pick. The Eagles will bring to town a top-notch defense that is coming off a performance that should prompt all opposing signal-callers to tightly strap on their helmets. By balling out against the Cowboys’ formidable division rival, Prescott, whom the team tried not to draft with a fourth-round pick, would strike another blow for the status quo, even with Romo apparently inching closer to being medically cleared to play following his latest major injury.

As a lifelong Dallas Cowboys fan, Omar Epps tells the First Take crew that he thinks Tony Romo is done as the Cowboys starting QB.

Not only has Prescott clearly shown he’s that Dude of the future, he’s also The Man right now. With how Prescott has bailed out the ‘Boys, what’s left to discuss?

“He’s the present,” ESPN analyst Ryan Clark said on the phone. “He should continue to be the starting quarterback even when Romo returns. He has been a special guy from his first snap in the preseason. You could just see there was something about him.

“But it was the preseason, so you still had to wait and see. There’s no more question about it now: He can win a lot of games in this league. He’s not just a guy who can manage the offense. He’s much more than that.”

It doesn’t take a quarterback coach to know that Prescott is a baller. In his first six games, Prescott has rattled off an eye-opening list of accomplishments that includes:

Even Prescott’s Eagles counterpart is impressed. Philadelphia rookie quarterback Carson Wentz got to know Prescott a little bit on the pre-draft circuit.

Wentz also has been surprising while being No. 1 on his club’s depth chart all season. After starting 3-0, the Eagles (4-2) are second in the division to the Cowboys. Sunday’s showdown at Jerry World marks the first time since the 1970 merger that two rookie quarterbacks meet with a combined winning percentage of .750 or better (with a minimum of three starts), according to the Elias Sports Bureau.

“It’s exciting. It’s exciting for him, for me,” Wentz told reporters who cover the Cowboys regularly in a conference call Wednesday. “Obviously, [their first matchup is] going to be played up into something. It’s cool to see another young guy like him that.”

He tops all passers with an 82.9 Total Quarterback Rating. Matt Ryan of the Atlanta Falcons is second at 82.0. Prescott attempted 176 passes before he threw an interception. That’s the most pass attempts without an interception to begin an NFL career. Also, only New England Patriots quarterback Tom Brady has a higher completion percentage (75.2 to 68.7) than Prescott. Just call him the real Willie Beamen.

“He’s done a really good job throughout the season in maintaining his poise, his confidence in his demeanor, no matter what’s happened,” Pro Bowl center Travis Frederick said Wednesday after practice at the team’s opulent new headquarters in Frisco, Texas.

“You saw [it] against Green Bay. He kinda had that first blunder, that first interception, and never blinked. That definitely gives you confidence in believing in what he can do as a player. But also, it’s fun to watch him grow week to week.”

For Beamen, er, Prescott, this week figures to be his toughest test.

Led by standout defensive tackle Fletcher Cox, the Eagles’ defense is third in points per game, and fifth in both yards per game and passing yards per game. That’s all impressive enough. What was really something, though, was how the Eagles went in on the Minnesota Vikings last week.

Each week, quarterbacks face potentially painful experiences. But, dang, the Eagles are trying to take things to a nightmare level. However, to hear Dallas head coach Jason Garrett tell it, Prescott has got this.

“It starts with his preparation,” said Garrett, who will talk your ear off about all the positive signs Prescott has displayed since his first day on the team.

“He was always ready. Always was able to handle the offense, call plays, handle himself at the line of scrimmage. That was always very impressive, right from the outset. You could tell he was prepared. You could tell it was important to him.

“And then athletically, he’s impressive. He can throw the ball. He can move around. He made some plays early on that made you feel he could see the game, and be instinctive throwing the ball from the pocket.”

He’s also great in the film room. Against the aggressive Eagles, attention to detail is a must. Although Prescott moves much better Bradford, the rookie must also rely on his smarts to stay upright.

Prescott has been putting in extra work to study up on blitzes, and “you become a little familiar with it. I’ve seen it before,” Prescott said of different approaches that Cowboys opponents have used against him.

“He’s looking in the right place at the right time. His feet then ‘marry’ his eyes. Because his eyes are in the right place, his feet tend to follow. … His ball isn’t almost accurate – it’s precise. The ball finishes on the face mask. That tells me that he’s also seeing with eyes the speed, the spacing of the receivers next to the DBs and the splits of the zones. He’s seeing clear pictures, so he’s making precise throws.”

With Prescott at the controls, everything has been picture-perfect at One Cowboys Way. But trouble could be around the bend.

Romo returned to the practice field Wednesday for the first time since training camp, although he was not in uniform and continues to rehabilitate from a compression fracture in his back. In the portion of practice open to the media, the four-time Pro Bowler threw some passes during individual drills and did light work.

No one could deny that Romo is much more experienced than Prescott. And way back in 2014, Romo had the greatest year of his career while leading the Cowboys to the NFC East title. He’s also 36. In his last four games including the preseason, Romo has left three times because of significant injuries that sidelined him for long stretches. At 23, Prescott has youth on his side. He stays on the field. And all he does is win, win, win.

The Cowboys have something great going. It starts at quarterback. Altering that isn’t a risk worth taking. All you have to do is review the evidence.