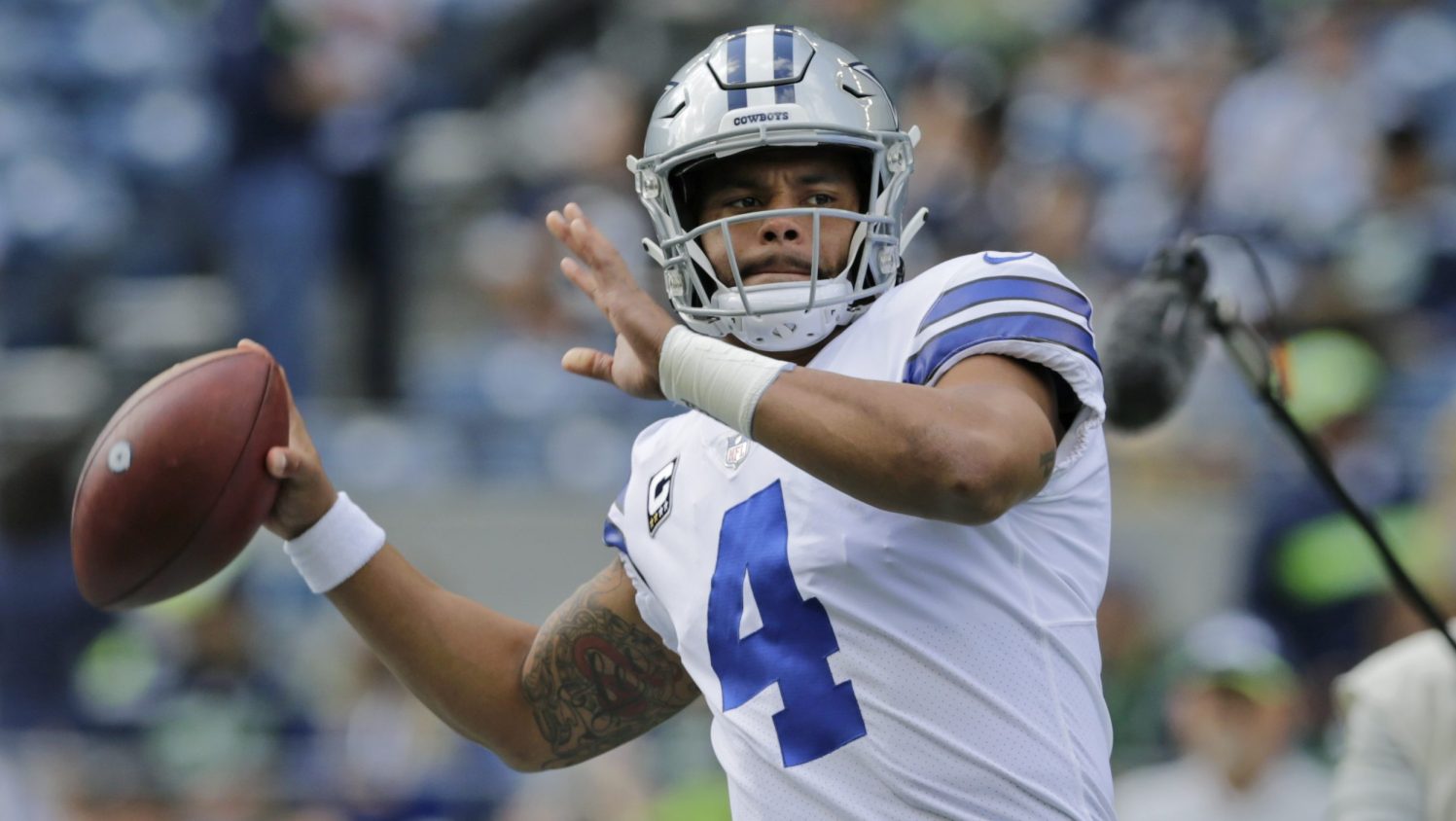 Is Dallas holding Dak back?

Until last Sunday against the Detroit Lions, Dak Prescott had failed to surpass 200 yards passing in a game this season. He also had a pair of sub-200-yard games to end last season. In the modern NFL, with the rules skewed to encourage passing, those numbers are certainly cause for concern. Over that five-game stretch, the Dallas Cowboys went 2-3. But the most damning statistic? Over that same span, the Cowboys averaged 11.8 points per game — dead last in the NFL and almost nine points below the league average.

The shine of Prescott’s sensational 2016 rookie season has protected him from the criticism that has been heaped on his underachieving offense. Head coach Jason Garrett and offensive coordinator Scott Linehan have been viewed as the problem. Fingers have been pointed at the O-line’s regression after some key losses. The departures of Dez Bryant and Jason Witten have prompted some to blame a lack of playmakers.

But receiver Cole Beasley wasn’t here for being scapegoated. Before the Week 4 game, he said to Stefan Stevenson of the Fort Worth Star-Telegram, “We’re just getting open; that’s all we can do.” He continued, “If you watch the tape, that’s all you’ve got to do. A lot of people aren’t watching the tape.”

So that’s what I did.

After watching last week’s two-point win, when Dallas scored 26 points (the most they’ve scored this season), some could be convinced that the Cowboys’ offensive woes are a thing of the past. But the film left me with more questions than answers, so I decided to watch all of the Cowboys’ offensive snaps this season to understand why the offense has been more bad than good.

As is normally the case, everyone is somewhat responsible. But let’s discuss the worst offenders: Linehan and the offensive coaches.

My major gripe with Linehan is game planning and play design. He has been criticized for his playcalling, but it’s hard for me to fault Linehan the playcaller because it appears to me that he doesn’t have the best options to choose from. He is being failed by the game plan developed during the week.

His most egregious mistake is failing to go deep on early downs. Connecting on long throws would be a bonus, but for a team built around its ability to run the ball, like the Cowboys, just attempting play-action deep passes is more important. The Cowboys are last in the league in percentage of passing attempts of 20-plus yards on first down. They are second to last in percentage of attempts of 15-plus yards on first down. And they are first in the league at percentage of 5-plus-yard attempts on first down. This is incredibly stupid because it makes playcalling easy for the opposing defense and everything more difficult for their own offense.

Good game planning is about creating macro playcalling dilemmas for the opposing coordinator and microexecution dilemmas for select players on the field. The easiest way to create these dilemmas is to create packages of complementary plays that look similar but stress different areas of the defense, forcing them to commit to stopping one of the plays, which will open up the other plays. Run versus play-action pass is the most basic of these dilemmas.

Linehan and the Cowboys run plenty of play-action that creates microexecution dilemmas for linebackers. For example, they often motion a receiver or second tight end to a wing location just behind or outside of the on-the-line tight end. Then they run hard play-action in that same direction. While this is happening, the wing player runs behind the line of scrimmage to the opposite flat. The defender responsible has a dilemma: either attack the run aggressively and commit to stopping the league’s leading rusher or patiently read his keys anticipating the play-action. Prescott bootlegs out and hits his receiver for a 3- to 7-yard gain.

The Cowboys are last in the league in percentage of passing attempts of 20-plus yards on first down.

That’s a fine play, but it doesn’t scare anyone. It doesn’t affect the defensive coordinator’s playcalling. He will still call a single high defense or a blitz, something geared toward stopping the run, because the risk of not doing so is only 3 to 7 yards. Cowboys running back Ezekiel Elliott averages 7.45 yards a carry on first down anyway, so there’s no dilemma there for the defensive coordinator. More could go wrong for the offense on a pass, and if it’s completed, the defense is pretty much in the same position it would have been in had it been in Cover 2, which is weaker against the run but would stop that particular pass.

That’s not the only pass the Cowboys have in their first-down arsenal. They also run dropback, 5-yard quick slants and slot options, which don’t scare defensive coordinators out of single high either. They’ve run a play-action comeback a few times that hits at 10-12 yards. And I’ve seen a play-action slot deep over, which could go for 15-20 yards if everything works perfectly. But they’ve only run it a couple of times, and things didn’t go as planned.

Of their 42 first-down pass attempts, only two were 20-plus yards in the air. One was a 64-yard touchdown to Tavon Austin against the New York Giants and the other was an incompletion to backup tight end Blake Jarwin against the Cincinnati Bengals.

Aside from missing out on big plays, Linehan’s reluctance to go deep makes life more difficult for Elliott and the offensive line. According to NFL Next Gen Stats, Elliott and the Cowboys’ offensive line face a loaded box (when there are more defenders than blockers) on 36 percent of first downs. Elliott has the third-most yards in the league in that situation against a loaded box and deserves a great deal of credit for his production, as does the offensive line. Next Gen Stats show that against a loaded box on first down, Elliott averages 3.1 yards before “close” (close is when a player is within 1 yard of the ball carrier). That is the best in the league in that situation.

As for the receivers, according to Next Gen, their separation numbers (distance between receiver and nearest defender when the ball arrives) are about league average. But, to be fair to them, separation is only calculated for plays when the receiver is targeted. So Prescott, who has a tendency to hold the ball for too long, could be missing open receivers. Which I saw happen some, but not enough for that to be the problem in this offense.

What I saw on third downs was a lack of imagination in play design. As ESPN personality Mike Golic Jr. explained on the Bootleg podcast, Linehan relies on his players to beat the man in front of them. He doesn’t do much scheming to get them open. And that makes for tight passing windows, which puts the pressure on Prescott to be incredibly accurate and precise — which is not his strongest skill as a passer.

Unsurprisingly, Prescott leads the league in tight-window throws at 22 percent. But, to Prescott’s credit, despite the tight windows, he has thrown only two interceptions this season, both to Earl Thomas of the Seattle Seahawks. One resulted from a well-thrown slant that was dropped, and the other was an inaccurate pass that was tipped into the air and snagged by the defense.

The most surprising impression I got from watching the Cowboys is that Prescott is a better quarterback than he was as a rookie. Although the stats don’t support that opinion, he has grown as a quarterback. He understands his offense and the opposing defense at a level that many quarterbacks never reach. He has demonstrated that football knowledge in every game this season by recognizing blitzes and coverages pre-snap and checking to better protections and plays for those defenses.

I had low expectations for the Cowboys before this season started because I thought they lacked the offensive talent needed. But I was wrong: Talent is not the problem in Big D. They can’t become the Los Angeles Rams or Kansas City Chiefs on offense — their ceiling is much lower than that — but if they stole some pages from those playbooks, they could be a lot better than they are now.