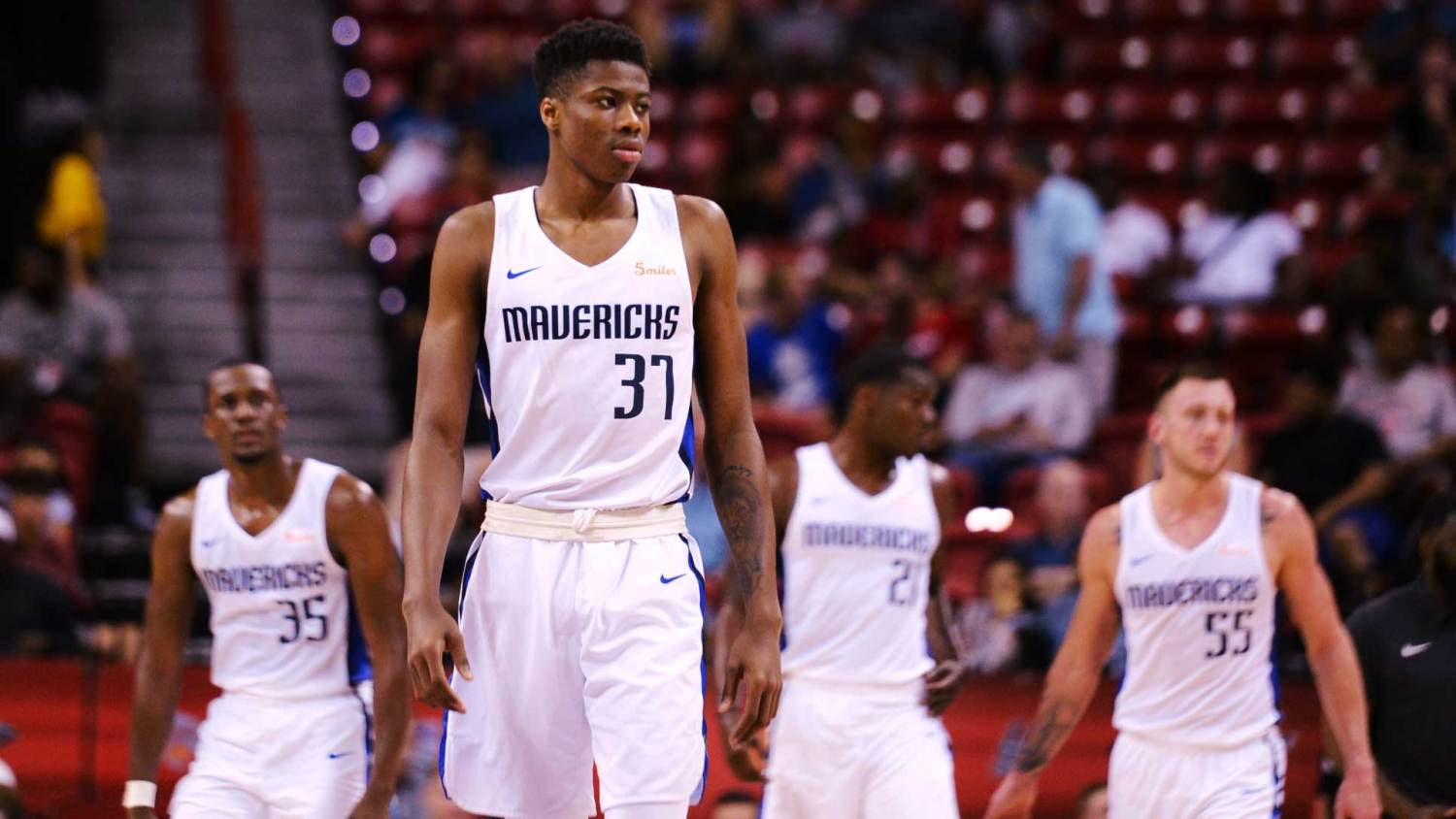 On a scorching night in Las Vegas, where temperatures rest comfortably above 100 degrees at midnight, Dallas Mavericks rookie Kostas Antetokounmpo is having chills. Standing in a hall that leads to the court at UNLV’s Thomas & Mack Center, Antetokounmpo has just finished his first NBA game.

It was a 92-85 summer league loss to No. 1 pick Deandre Ayton and the Phoenix Suns. Antetokounmpo didn’t receive much playing time. A late rebound putback gave him his lone points of the game. But none of that mattered in the moment. “I was a little nervous,” he said, as an innocent smirk emerges. “I feel like every first game is like that. But this one was special, you know? To get to wear an NBA jersey, it’s a dream come true.”

That dream is part of a family business that was born in Athens and mainstreamed in the States. Antetokounmpo is the newest neophyte in the NBA’s fraternity within a fraternity: blood brothers playing in the league. There’s Stephen and Seth Curry. Pau and Marc Gasol. Justin, Jrue and Aaron Holiday. Brook and Robin Lopez. Marcus and Markieff Morris. Mason, Miles and Marshall Plumlee. Tyler, Luke and Cody Zeller. And now there’s Kostas and his brother Giannis “The Greek Freak” Antetokounmpo of the Milwaukee Bucks. It’s unclear whether Antetokounmpo will land on the Mavericks’ opening-night roster when the season opens.

“It doesn’t matter if you’re the No. 1 pick or undrafted. You define your game, not your pick.”

It’s counsel he received from Isaiah Thomas that helps him, on and off the court. Thomas, like Antetokounmpo in 2018, was the last pick in the 2011 NBA draft — and has developed a productive, journeyman kind of career. “[Thomas] just told me get to work,” he said. “Work hard and play hard. It doesn’t matter if you’re the No. 1 pick or undrafted. You define your game, not your pick.”

Sports are part of the bloodline. He is the third Antetokounmpo to don official NBA apparel. Francis, the oldest of The Antetokounmpo Five, played soccer professionally in Nigeria and Greece, as well as pro basketball in Greece. And Antetokounmpo predicts that a fourth — the youngest, Alexandros — will one day soon call the NBA his workplace. Thanasis currently plays professionally overseas and had a short stint with the New York Knicks during the 2015-16 season. And his older brother, Giannis, is on the short list of candidates to take over LeBron James’ title of “Best Player in the World,” once the King’s reign ends. Yet Antetokounmpo is already anticipating that first game against his big brother, the Milwaukee Bucks superstar.

“I told [Giannis] I’m gonna try to bust his a–,” Antetokounmpo said, not even trying to hide his laugh. “I say that to all my brothers. We always say, if we play against each other, the only thing we’ll do is maybe let them score one time. Then after that, I’m locking him up.”

“To get to wear an NBA jersey. It’s a dream come true.”

Antetokounmpo knows Giannis better than most, but it’s hard to envision a scenario where he clamps down one of the most talented players in the league. It’s classic little-brother-stepping-to-big-brother, and it’s the mentality he needs to have, as he’s entering a league enjoying one of the finest talent booms it’s ever seen. But Antetokounmpo is now a character in a drama that dominates bars, salons, barbershops and water coolers across the country.

“I feel like, when I was on the outside, [seeing] all this free agency,” Antetokounmpo said, scratching his head, “I wasn’t really paying attention to it? I’d only watch big players who went to other teams. But now I’m really into it. It’s important to know who’s coming and who’s going.”

He knows that being drafted doesn’t mean the quest to improve ends — it ramps up. It’s either get better and succeed or allow complacency to creep in and lose a spot in one of the most exclusive industries on the planet. More than any singular facet of his physical game, though, he wants to sharpen mentally.

“Just being able to communicate better. Because sometimes playing in front of big crowds, you gotta be loud,” Antetokounmpo said. “You gotta talk. You gotta make sure everybody’s on the same page. You gotta be a leader.”

A source of that desire to be a leader is from his late father, Charles. The elder Antetokounmpo died suddenly of a heart attack in September 2017 at age 54. At the time, Antetokounmpo was beginning his one year at the University of Dayton. Charles Antetokounmpo was a professional soccer player in Nigeria and moved to Greece in 1991 with his wife, Veronica. Their journey — from immigrating to Greece to struggling to make ends meet in Sepolia, a neighborhood in northern Athens, to finding a home in Milwaukee — in many ways mirrors current headlines. And at the base of their migration from country to country was the idea of family.

Living life without his father is a daily coping process for Antetokounmpo, and for the entire Antetokounmpo clan. Antetokounmpo credits his teammates at Dayton for helping him through his life’s most painful tragedy. “Every time I step on the court it means something. You can be gone this fast,” Antetokounmpo said, snapping his fingers. He’s not overly emotional, but the topic does take him to a different place mentally.

“I talked to my pops like [the day before]. Then I get a call the next day, he’s outta here. I’m just grateful to be here. Grateful to make it where I’ve made it to. Grateful [about] where my family is.”

He’s says he’s not really about thinking too far ahead. Living in the moment is important. His father’s passing only reinforced this. He’s an adult by age and by profession. But there’s still a childlike twinkle in his eye that the hard reality of professional sports hasn’t changed. It’s an endearing quality in the 6-foot-11 forward. He’s a walking embodiment of Big Sean’s “dreamed it and real life’d it.”

“I’m still in awe. I still can’t believe it,” Antetokounmpo said before catching up with his teammates. “I just pray to God every day. I’m so blessed.”