Damon Young of Very Smart Brothas worries about everything. A lot.

His new book, ‘What Doesn’t Kill You Makes You Blacker,’ takes you into the brain of the most anxious black man in Pittsburgh

Damon Young is a Very Smart Brotha who is riddled with neuroses. And now, everyone who buys a copy of his first solo book will know all about them.

In What Doesn’t Kill You Makes You Blacker, Young offers, among other things, an accounting of the ways he has bumbled through life narrowly avoiding death by embarrassment. At a recent event in New York, Young found himself mortified anew when journalist Nikole Hannah-Jones asked him to read aloud the most cringe-inducing part of the whole book. It’s a paragraph in which Young shares the details of a hapless sexual encounter he describes as “an hour of attempting to re-enact the saddest Penthouse letter ever.”

Besides being the author of the new memoir and essay collection, Young is the co-founder of the popular site Very Smart Brothas. He’s one of the internet’s funniest social critics, offering opinions on everything from when black people are allowed to be ashy in public (during a polar vortex) to the correlation between being a black Republican and possessing a jacked-up hairline.

What Doesn’t Kill You tells the story of Young’s life in Pittsburgh as a kid who always felt slightly out of place. He grew up in the ’hood until his parents could afford to move to a quieter neighborhood in a better school district. He won a basketball scholarship to Canisius College in Buffalo, New York. He became a teacher and eventually a writer. But no matter where he went, Young insisted on overthinking everything and generally being as awkward as possible. His book tells us how he got through it, got married and started accepting the things that once made him insecure about himself, his masculinity and his blackness.

When the word “neurotic” comes up, a deep-voiced former college basketball player isn’t the first image that comes to mind. Did you ever take antianxiety meds as a kid?

My antianxiety medication is Jack Daniel’s Tennessee Honey and maybe The Godfather and maybe an hour or two of basketball. So I guess I self-medicate in a way. You think of neuroses in culture and you think of someone like David Sedaris or Woody Allen or even [Jerry] Seinfeld. It’s a white person that you’re thinking about. White, middle- to upper-middle-class sort of person. Very often a man. And basically the sort of person who can afford to be anxious, who can afford to have neuroses because they don’t necessarily have these deep traumas happening in their lives. They have space to overthink, and they create work in that space. People almost expect that of them. It’s a part of the spectrum. Everyone has this spectrum of behavior that you assign to them, and when you look at a person like Woody Allen, that fits the spectrum. If Woody Allen won the slam dunk contest in the McDonald’s All American contest, you’d be like, ‘Holy s—.’ That doesn’t fit.

I think, with this book, people might be surprised by how deep and how vulnerable and how much I talk about that anxiety and nervousness and self-cautiousness. I come in a different package. Those neuroses are not unique to white people or upper-middle-class people. If anything, we probably deal with it on an even greater level because we have all of these major stressors from existing while black in America.

You write a lot about expectations about how you should behave and how you should treat women, like needing to distance yourself from being seen as “soft.” When did you begin to realize that there was something wrong with the narrow spectrum of feelings men and boys are allowed to express?

You see these guys who are just so cool. And not just ballplayers, but Billy Dee f—ing Williams and Blair Underwood and Denzel [Washington]. Denzel was cool as f— in Glory! He was the coolest slave. (Laughs.) Even when he’s getting whipped, he’s got that one tear!

So you have this narrative about how black boys are socialized to be violent or to look at rappers or drug dealers or anyone who has that aura of violence around that. What might be more prevalent and even more dangerous is not the violence but the cool and seeing that as the ideal. If you aren’t that, or if you struggle to meet that, then something’s wrong with you. And the thing is, we all struggle to meet that. A small percentage exists. I mean, there are Billy Dees in the world. I think the vast majority of us are either really good at performing or not as good at performing or are like, ‘F— the performance.’ 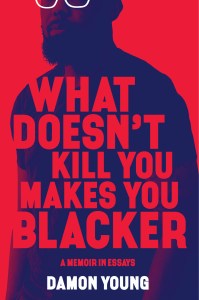 Did you give yourself a hard time for not being able to live up to these arbitrary standards?

Yeah, I definitely did. I felt like I was less than. I definitely felt that my wiring was misfiring, that something was just off if I couldn’t be the way I saw so many of my peers being. … I don’t anymore. It helps that I received validation. I’ve been able to build a career off of writing and writing about these sorts of things. I have great friendships. I have this great wife and children. I think once I started writing and having space to navigate what’s happening in my head and have other people on that ride with me and who are fans on that ride with me … they’re like, ‘Oh, I get why he acts that way.’ That’s been extremely helpful. If I didn’t have that, I don’t know. My answer to your question might be different.

You wrote something on Very Smart Brothas that generated more backlash than I expected when you said straight black men are the white people of black people. What happened after you published that?

Before I even answer, I have to say, I’m not the first person to say that. A Facebook friend said that. Other people used the exact same phrasing. Many feminist scholars have … made that point. I don’t want to take credit for being the first or the second or the third or the fourth.

The reaction was actually overwhelmingly positive. Most of the people who read that and sat with it and thought about it either agreed immediately or eventually. It’s just that the people who were offended by that were very loud. [Author] bell hooks invited me to meet with her at her institute at Berea College. We had a community talk with me, her and 30 other people in the room about intersectionality and privilege and power dynamics.

Do you think part of the reason this got so much attention is because you’re a guy?

Oh, definitely. And that actually just proves the point.

How does your thinking about gender and race influence how you raise your kids?

That’s what I do when I play basketball. I have to be literally on the brink of death to stop and get some water.

A lot of your writing revolves around racial essentialism. Let’s say your son came up to you and said, “Dad, I wanna be a professional rock climber.”

A lot of people talk about sports as a way to turn off the anxiety nozzle in their brain. Is that how basketball was for you?

It’s how basketball still is for me, where I can just lose myself in the game. There’s a thing I realized that I do that’s unique to me. I’ve been doing this my whole life: I do not get water between games. I just play. So if I’m at the court and I’m playing pickup and there’s a break and guys get their water or their Gatorade or whatever, I stay on the court. I’m still shooting, still just focused. I’m that annoying m—–f—– who’s like, ‘Aight, c’mon, let’s go! Who got next?’

Do you not get cramps? Are you part camel?

It’s almost like an addiction, where you’re just doing a thing and you’re not cognizant of time or space or anything else. You’re just really hyperfocused on this thing. Like you can be at a slot machine for four hours and not even get up to go to the bathroom. That’s what I do when I play basketball. I have to be literally on the brink of death to stop and get some water.

I’m not part camel. I’m not a minotaur. As soon as I leave the court, I go and I drink, like, 18 Gatorades. I’ll get something to eat, and then I’ll go home and I’ll eat again. So it’s obviously not healthy, me doing this, but I just need to stay on the court. Losing myself and submerging myself in that is a form of self-care.