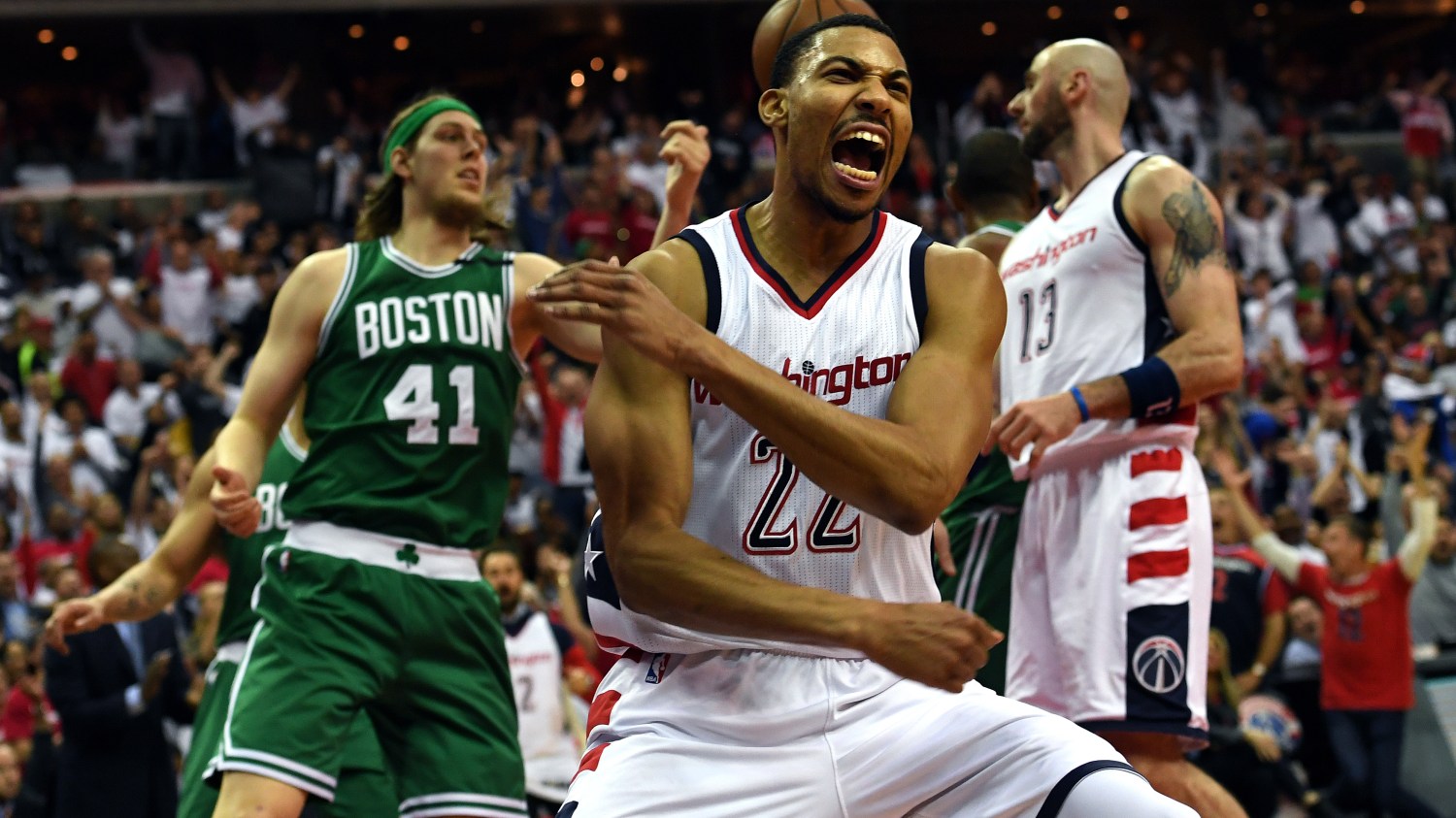 Washington Wizards forward Otto Porter Jr. (22) celebrates after scoring during the second half of Game Four of the NBA Playoffs Second Round at the Verizon Center on Sunday, May 7, 2017. Toni L. Sandys/The Washington Post via Getty Images
2017 NBA Playoffs

D.C.’s long wait for the Wizards to matter

A hoops-crazy town hasn’t had a winner in years

The Phone Booth, aka the Verizon Center in downtown D.C., is library-quiet now. The players and coaches and fans who had the arena in a state of delirium an hour and a half ago are gone. It’s just a dozen or so reporters in the media workroom, the equipment managers doing laundry and the video coordinators breaking down film from Game 4 of the Eastern Conference semifinals.

William “Pat” Patterson, one of the few security supervisors still on duty, is patrolling the corridor between the home and visiting NBA locker rooms.

“When the old Bullets come back and see me, they’re like, ‘You still here?’ ”

More than 40 years after his guidance counselor signed a permission slip so a 15-year-old could work at the first arena that team owner Abe Pollin built in suburban Maryland, Patterson has never left.

“I haven’t seen this type of electric in 25 years or more,” he said after the Wizards broke free for a pulsating 26-0 run against the Celtics, making the building go agog with noise and sound, tying the best-of-seven series at two games apiece, spinning the District and beyond on their fingertips. “People have been waitin’ so long to see them break out.”

If the Wizards win just one more game, they will have advanced further in the postseason than any NBA team from Washington since 1979. It’s a testament to John Wall, Bradley Beal and the theater they and their teammates have provided this year, as well as to the many, many woebegone Wizards and Bullets teams of yore.

Georgetown and Maryland picked up the torch when Washington’s NBA team stopped mattering that much in the 1980s and 1990s. But lately, even the DMV’s — Washington, D.C-Maryland-Virginia area — stellar college basketball tradition has been beaten down.

A Washington-area team has not been to the NCAA Final Four in a decade. Maryland is coming up on a dubious anniversary: Next season will be the 16th year since the Terrapins advanced past the Sweet 16. Georgetown just did the unthinkable, firing a Thompson as a coach. John Thompson III couldn’t do any wrong early, returning the Hoyas to the prominence his father perennially knew. But the monster he created came back to bite him.

Times got so lean a few years ago that many D.C. hoopheads co-opted Virginia Commonwealth when Shaka Smart guided VCU to the Final Four. Suddenly, Richmond, Virginia, didn’t seem that far away.

It was hard to understand anymore that Washington has always been a basketball town at its core.

From Dave Bing at Spingarn High School to Elgin Baylor dunking over Wilt Chamberlain as a schoolboy legend at Turkey Thicket to the Goodman League at Barry Farm in Southeast D.C. to Morgan Wootten’s DeMatha powerhouses, and on to Kevin Durant at Montrose Christian … D.C. has a deep reservoir of blacktop-and-hardwood memories to dwell on.

But that NBA team in D.C.? Except for a few years of hope and hype — legends on creaky knees selling tickets (Michael Jordan) and talented players who broke more hearts than records (Gilbert Arenas) — the people coming to see the games have been parched.

Until now. Until Wall flies downcourt as if a spoiler is attached to his back, using nine people for pylons until he somehow gets to the rim in a blur: scoring, hitting the floor, drawing the foul, making everyone rise from their seat.

“He’s a hell of an ace in the hole,” said Phil Chenier, who played on the Bullets’ only title team in 1978 and has been the team’s color analyst for three decades. “He changed the game.”

So has Beal, who squares up from 10, 15, 23 feet and beyond, releasing the smoothest stroke outside of Oakland, California.

At last, the District has a basketball team to embrace again — and it’s one with a serrated edge.

“You can feel it at the games. For it to be 40 years, they deserve for something like this to happen,” said Markieff Morris, the Wizards’ take-no-prisoners power forward.

Miles Rawls, the legendary commissioner of the Goodman League and a Wizards season ticket holder, said it’s “Wall and Beal.”

“Also, the drought,” he added in his trademark rasp. “There’s been such a drought. Georgetown ain’t doin’ nothin’. Maryland ain’t doin’ nothin’. We need these Wizards to at least get to the East Finals. … This is still a basketball town. We’ve been waiting for something to explode.”

The greatest moment on the Verizon Center floor does not belong to the Wizards. No, to this day, it’s owned by a college team.

In 2006, George Mason in nearby Fairfax, Virginia, a No. 11 seed, knocked off top-seeded UConn in overtime of the East Regional Final, propelling the Patriots and coach Jim Larranaga to the Final Four.

Larranaga, now the coach at Miami, knows the sleeping giant that is D.C. when it comes to hoops.

“The greatest thing about living in the D.C. area is the knowledge and passion people have for basketball,” Larranaga said outside the visiting locker room after Game 4, standing beside his wife, Liz. (They were waiting for Jay, their son, an assistant coach with the Celtics.)

He still tingles inside every time he enters the building, thinking about that afternoon when UConn fell to the Little School That Could.

It’s the same feeling Patterson had in 1978. It’s the feeling he’s still waiting to have again.

Between 1988 and 2004, Washington went to the postseason only once, getting swept by the Chicago Bulls in the first round of the 1997 playoffs. The Wizards also didn’t see the playoffs from 2009-13, as Wall took his lumps and waited for help to arrive.

“Most years, there’s just a lot of frustration,” Patterson said. “I love the Michael years, but in my opinion that was about money, puttin’ butts in the seats. It was more about Michael than a real contender. This? This feels different.”

“Pat” wasn’t yet 16 when he got a job at the Capital Centre. He needed a permission slip from his guidance counselor at Bladensburg High School. The first live event he worked as a security guard was a concert. Sunday, May 22, 1977: Elvis.

The next May he was stationed on the floor, keeping the court safe during the NBA championship series between the Seattle SuperSonics and the Washington Bullets. The 1978 Bullets won in seven games in Seattle, the last road team to win a Game 7 in the Finals before LeBron James and the Cavaliers did so last season.

From Wes Unseld, Elvin Hayes and Bobby Dandridge to Kevin Grevey and Phil Chenier, Patterson can still tell you everything every player on Washington’s only NBA championship team did well. Chenier, for instance, “loved that little side jumper from the corner,” he said. “Man, he loved that shot.”

Patterson wears a two-tone windbreaker, light and dark blue, and folds his arms more out of contentment than frustration now. He played football at Bowie State but always kept his security job. About 20 years ago, they made him a supervisor.

“Got a good life. Family. Good job. Sure be nice to see them win it again, though.”

With the Cavaliers and Warriors slated to meet annually in the Finals almost until the next millennium, that might be a hard ask. But don’t tell that to Rawls. He’s convinced it’s going to happen, that his greatest basketball memory in D.C. won’t always be the day the And1 Street Tour came to Barry Farm in 2002 to take on his Goodman All-Stars.

“I think once we get Boston, we can take Cleveland in 7,” Miles said above the din. “I really think that. That’s why they didn’t win the division, because they didn’t want to play us in the second round.”

Like we said, they’ve been waiting a long time.