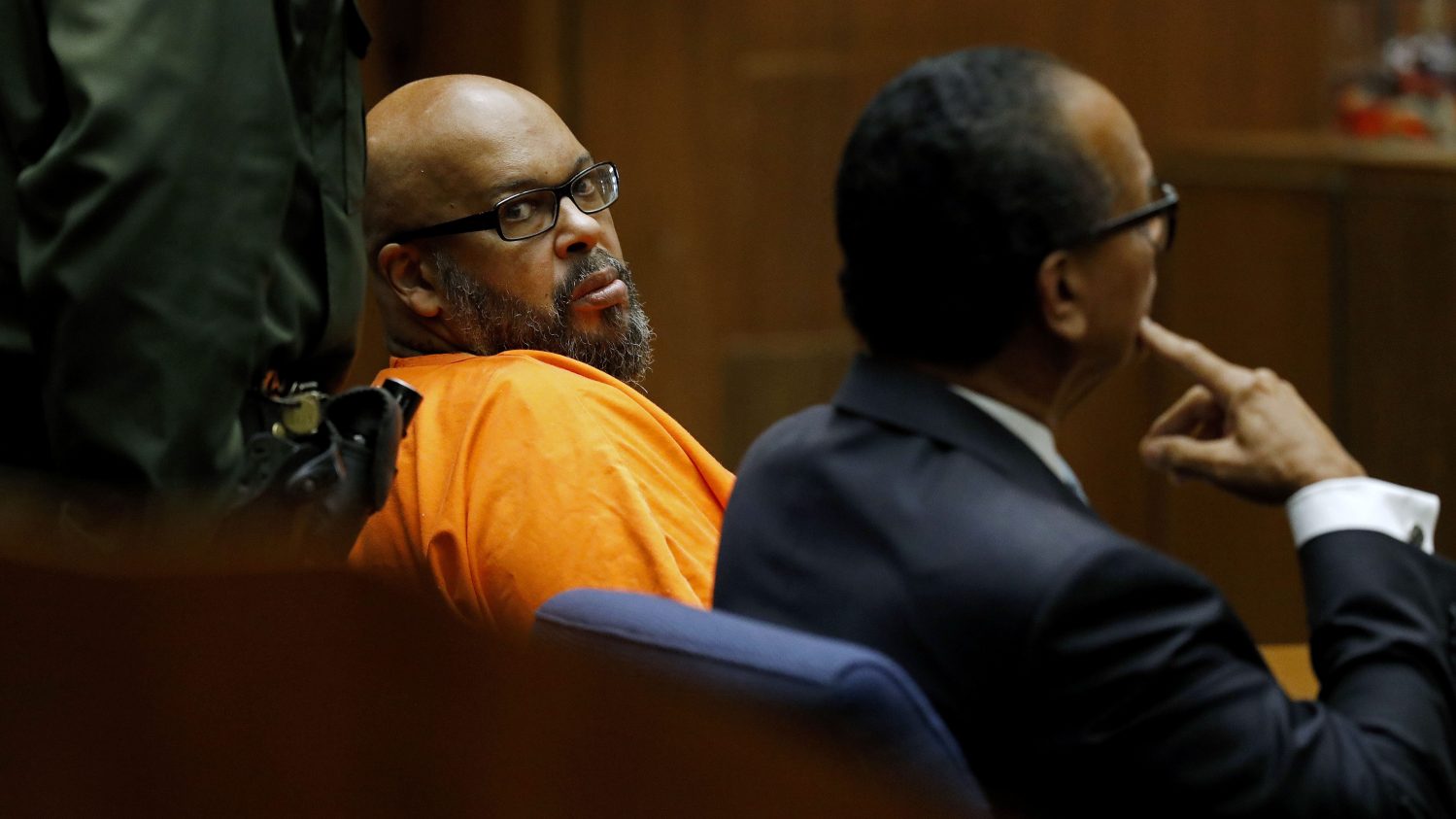 For Death Row’s Suge Knight — violent bully, music executive — it seems the ride is over

Knight had Dr. Dre, Snoop Dogg and Tupac, and now he will serve up to 28 years in prison for manslaughter

The rapper Kurupt, when he visited Power 105.1’s The Breakfast Club earlier this month, couldn’t remember the exact nature of the particular transgression. The event happened more than 20 years ago. What he did remember, though, were the details. Like Knight roughing up an employee up before sitting on the employee in the bathroom. And Knight’s impossible and grotesque ultimatum.

“Where’s the bucket?” Knight asked. He had ordered everyone nearby to urinate in a bucket. “You gonna drink this, or I’m gonna whoop your ass. For real.”

If he does the entire bid, Knight will be 81 years old at the time of his release.

According to Kurupt, the employee, both terrified for his life and protective of what little pride remained in his body, squealed. He pleaded for another option. Any option. These were just words to Knight, then the most imposing, feared and successful grassroots story in America. The cries — an aphrodisiac to his power trip. “Which one you want? You gotta get ready to get on the stage now.”

The employee drank the urine. He was fired, and Kurupt never heard from him again. Much of the same can be said about the man who inflicted that trauma. Through urban legends and confirmed narratives like Kurupt’s, Knight had graduated to an archetypal figure in rap’s lineage. But much like the Death Row pawn he allegedly forced to drink bodily fluids, Knight’s aura of invincibility and reign of terror is now a story from the past.

“When I get out,” Knight said almost nonchalantly on Jan. 30, 2015, “I can always smoke it.” The it was the half-smoked cigar he placed in a tree outside of the Los Angeles County Sheriff’s Department. Knight was turning himself in for questioning after a hit-and-run that left 55-year-old Terry Carter dead.

The incident, now immortalized in Knight’s legacy just as much as Death Row’s meteoric rise and unparalleled demise, occurred after the former mogul discovered his likeness would be portrayed in the 2015 F. Gary Gray-directed Straight Outta Compton (Gray was also threatened by Knight). After a disagreement on the film’s set involving Cle “Bone” Sloan, Carter attempted to mediate a peace between the two men at Tam’s Burgers in Compton, California. What happened next depends on which side of the story is being told. But Knight, after being attacked by Sloan in the parking lot of Tam’s, propelled his Ford F-150 out of the parking lot, hitting both men. Sloan survived, but despite whatever beef he carried with Knight in the streets, it wouldn’t be taken to a courtroom. “I will not be used to send Suge Knight to prison,” he said then.

For 3½ years, Knight, strapped with a bail the judge refused to budge on, sat in custody. The only time he’d see the outside world was during transportation to the jail and the courthouse. Or during transportation to and from an area hospital because of his deteriorating health. Knight, 53, has long battled diabetes and blood clots, among other health issues.

Knight was a cocktail of Wesley Snipes as Nino Brown, John Gotti and Tom Lister as Deebo.

A dizzying amount of legal maneuvering prolonged a trial date that was pushed back more times than a post-Dre, post-Snoop or post-Tupac Death Row release date. As for Knight’s fiancée? Toi-Lin Kelley is serving three years for helping Knight violate a court order that forbade him from communicating with parties other than his lawyer about the case. A case he’s lost.

On Sept. 20, Knight stood in a Los Angeles courtroom. Long gone are the entourages packed with the Mob Piru Bloods. His famous beard, once glistening, is peppered with gray due to age, but equally as likely to the stress of an ending Knight, better than anyone else, knew was inevitable. His legal issues, at this point, are historic. His life in the public eye has been based on mystique, power, intimidation and violence. The end of his saga has arrived abruptly and quietly.

According to the Los Angeles Times, the framework for the plea deal began Sept. 19. Knight stood in front of Judge Ronald S. Cohen on the morning of Sept. 20 in Los Angeles to learn his fate. Did he accept the terms? “Yes,” said Knight, in a patented orange jumpsuit. The onetime impresario pleaded no contest to avoid a trial that, had he been convicted, would have sent him away for life without the possibility of parole.

Life, contextually speaking, for Knight is over. His manslaughter charge comes with an 11-year sentence but is doubled because of Knight’s prior felony convictions. Six more years were tacked on because of Knight’s use of a deadly weapon to commit a violent felony. His other pending cases were dismissed as part of the deal. It all adds up to potentially 28 years as a property of the state. If he does the entire bid, Knight will be 81 years old at the time of his release in 2046.

Knight’s aura — what made Marion, Suge — was that no one employed intimidation to their advantage like Knight. He’s a man who used fear to create an empire. Knight was a cocktail of Wesley Snipes as Nino Brown, John Gotti and Tom Lister as Deebo. “Interscope was a couple weeks from going bankrupt before they met me. Interscope wanted [Dr. Dre],” Knight once said. “I said, ‘Hey, I gotta own the masters. We gotta own the masters.’ They said, ‘How do you know about that?’ I said, ‘I know the business. We not gonna be the ones doing all the work and you get all the money and own it.’ Modern-day slavery. No different.”

The addition of Tupac Shakur in 1995 made Death Row just surreal. By 1996, Death Row was netting more than $100 million a year. And Suge owned 34 cars. Thuggin’ was not only paying the bills but also making kids from South Central Los Angeles richer than anyone could’ve ever imagined.

But by 1996, the label’s very public descent began. Dr. Dre left the label in March. Shakur was dead by September. And Suge was in prison for probation violation stemming from the Orlando Anderson fight the night Shakur was mortally wounded in Las Vegas. Snoop, after a disappointing sophomore album in Tha Doggfather, left for Master P’s No Limit Records. Knight had perhaps the greatest collection of high-level talent in rap history and lost it all within a year.

Death Row never recovered. The label stayed afloat for several years while Knight sat in prison, but it never regained its dominance. After years of financial shortcomings and subpar releases, Death Row’s death blow arrived in 2005 when Lydia Harris won an astonishing $107 million settlement for damages and royalties. Knight and Dr. Dre started Death Row, but Harris’ husband, the infamous and incarcerated Michael “Harry O” Harris, was its chief investor.

The following year, Death Row filed for bankruptcy. “They auctioned off everything,” said former Death Row artist Crooked I. “They even sold Suge’s boxer briefs that they found in the penthouse suites on top of the Death Row building. … He was one of the only African-American men to own a major building on Wilshire Boulevard, and they sold the man’s f—in’ drawers.”

No image personifies Knight and Death Row more than the 1996 “Live From Death Row” VIBE cover, a tour de force unlike anything the still young genre of hip-hop had ever seen. A beatsmith that changed the sound of music in Dre. A young charismatic emcee with the delivery of a jazz great (who’d just beat a murder rap) in Snoop. The culture’s most prolific, controversial and enrapturing star in Tupac. And the shot caller in Knight. Dre and Snoop went on to become titans of American music. Shakur, the only one to physically perish, is nothing short of a religious figure for hip-hop fans. Yet, it’s Knight who could be seen as the one who died the most.

“Ain’t nobody gonna leave here alive,” Knight prophetically said during the apex of his dominance and terror. “Everybody is born and everybody’s going to die. Period. That’s the way it’s played. Can’t nobody change that.”

Having long since lost his grip on a culture he helped construct, Knight is living that axiom: Being so deeply connected to the streets only lands you, as most everyone’s elders have always said, dead or in jail — or, even worse, as one enters jail spiritually dead already.

“[Falling down] either inspires you to get up and create something bigger,” Crooked I said, “or you crumble up inside and become bitter. … Suge had his opportunity to win. He chose to — you know a lot of people just stay stuck in time. The ’90s is gone, man. Some people gotta change … and some people just don’t wanna change.”