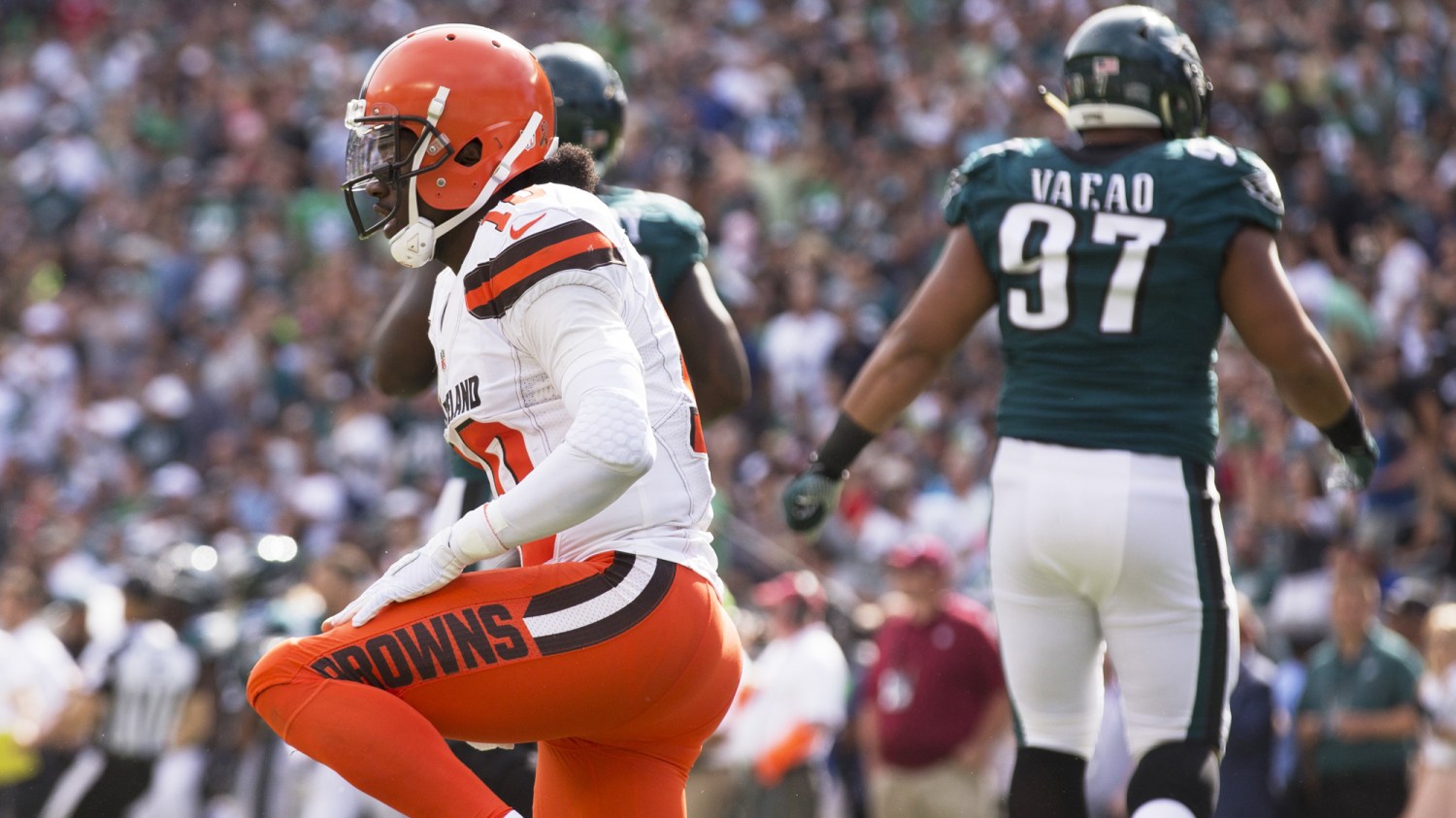 Robert Griffin III #10 of the Cleveland Browns picks himself off the ground against Destiny Vaeao #97 of the Philadelphia Eagles in the fourth quarter at Lincoln Financial Field on September 11, 2016 in Philadelphia, Pennsylvania. The Eagles defeated the Browns 29-10. Mitchell Leff/Getty Images
NFL

Deja vu all over again for Robert Griffin III

One shaky performance won’t end Robert Griffin III’s comeback bid with the Cleveland Browns. Head coach Hue Jackson believes that Griffin can still play at a high level – and Jackson is even more confident in his own ability to rebuild the former superstar. They’re truly in this together. We’re talking ride-or-die stuff.

Eventually, though, the quarterback must provide proof that Jackson is indeed correct about him. We’re still waiting.

For anyone familiar with Griffin’s years-long career slide, his performance in Sunday’s 29-10 season-opening loss to the Philadelphia Eagles was eerily familiar. Again, Griffin failed during one of those key moments that define the men who play football’s most important position. Throughout the game, the Browns’ offense sputtered, in large part, because Griffin was downright awful on midrange passes. And here’s what should most concern Jackson: The Browns’ captain, despite acknowledging he must protect himself, displayed an alarming lack of awareness about self-preservation. Late in the game, Griffin suffered a sprained left shoulder on a big shot that could have easily been avoided.

Overall, it was rock-bottom start for Griffin and the Browns. “There are things to improve as a football team, obviously,” Jackson said. “I never said we’re going to go 16-0.”

Granted. No rational NFL observer figured the Browns would threaten the undefeated 1972 Miami Dolphins. Cleveland went 3-13 last season and has lost at least 11 games seven times in the last eight seasons. With the Browns having the youngest roster in the NFL (their players’ average age is 25.5), Jackson is all in on the big youth movement. Growing pains are to be expected. But Browns fans were eager to see signs of encouragement, just a little improvement. After an 0-4 preseason in which the first-team offense mostly went missing, fans saw more of the same on Sunday.

For the Browns, the only thing that could have made the afternoon worse was if they lost an NFL record 12th consecutive opener (they extended their own mark) while facing a rookie quarterback whom they could have drafted, which, of course, they did. Believing that Carson Wentz didn’t project to be a top-tier passer, the Browns traded the No. 2 overall pick to the Eagles, who promptly drafted Wentz. At least on Sunday at Lincoln Financial Field in Philadelphia, picking Wentz sure looked like a home run.

Wentz completely outplayed his much more experienced Browns counterpart. In a debut both statistically and aesthetically impressive, Wentz produced 278 yards, two touchdowns (with no turnovers) and a sparkling 101.0 passer rating. Considering Wentz attempted only 24 passes in preseason, which was cut short after he injured his ribs, his showstopper was especially surprising. And most likely unsettling for many Browns fans.

Cleveland has the league’s longest-running quarterback problem. Griffin is the Browns’ 25th starting signal-caller since 1999. Only one during that span produced a winning record. Jackson had to give it up for Wentz: The young fella played well.

Way back when, Griffin raced out of the gate en route to winning the 2012 AP Offensive Rookie of the Year award. On Sunday, the memory of that player continued to fade.

In his first game since week 17 of the 2014 season (despite being healthy, Griffin was benched all last season by the Washington Redskins), the fifth-year player completed only 12 of 26 passes for 190 yards. On two plays, Griffin connected with Terrelle Pryor for 44 yards and Corey Coleman for 58, respectively. So on his other attempts, Griffin went 10 for 24 combined for 88 yards. He had no touchdowns, one interception, was sacked three times and finished with a poor 55.0 rating.

In fairness, Griffin didn’t have much help. The Browns had three dropped passes in the first half. Jackson made a highly questionable call, attempting a fake punt from Cleveland’s 41-yard line in the second quarter. The play failed – spectacularly. Five plays later, the Eagles extended their lead with a 22-yard field goal. In the third, center Cam Erving, who struggled with high snaps in practice and the preseason, snapped the ball through Griffin’s hands. The ball went through the back of the end zone for a safety. Teams, however, look to their quarterbacks to mask mistakes. Griffin only added to the Browns’ long list.

Trailing, 13-7, early in the third, the Browns were driving. On third and 10 from Philadelphia’s 17-yard line, receiver Andrew Hawkins broke free from coverage and was wide open on the left side of the end zone. Griffin put the ball where no one could catch it. “That’s gonna happen,” Jackson said. “He won’t be the first quarterback to miss a throw.”

The Browns settled for a field goal. They wouldn’t score again. You could feel the game slipping away from the Browns. So did they.

“I thought momentum was kind of coming our way,” Jackson said. “It would have been nice to finish that drive with a touchdown.

“There’s a chance for a huge play. If you don’t make it, you have to kick field goals, so the game’s different there. I think we all understand that.”

Anyone who understands the game also knows that the first rule of playing quarterback is to stay in the game so you can play. During Griffin’s four years with Washington, it often seemed he was absent when that was taught in Quarterback 101.

Griffin’s recklessness on the field was a source of frustration for Redskins coaches, most of whom believed he took unnecessary risks because he had a “hero complex.” During the preseason with the Browns, Griffin showed improvement at executing the quarterback slide and getting out of bounds. Late in the final quarter Sunday, he fell back into his old bad habits.

With just under four minutes to play, the Browns trailed by 12 points. On third and 14 from Cleveland’s 4-yard line, Griffin dropped back and then decided to scramble. As he ran toward the right sideline, Griffin should have slid to avoid a collision with a defender standing between him and the first-down marker. Inexplicably, however, Griffin remained upright and slammed into cornerback Jalen Mills. Clearly in pain, Griffin remained on the field while the Browns went for it on fourth and three. His errant pass was high and behind Hawkins.

On the sideline, the Browns examined Griffin’s left shoulder. Griffin took the field for the team’s final series and handed off three times as time expired. What was Griffin thinking when he took on a defender with the game all but over?

“The guy kind of surprised me there on the sidelines, trying to get out of bounds,” Griffin said. “It was just an unfortunate play. Just trying to fight for as many yards as we could, trying to score a touchdown … and put us in position to have a chance to win the game.”

At that point, though, it was highly unlikely the Browns would win the game. Griffin shouldn’t have challenged a defender who had that part of the sidelined locked down. He should have played it smart.

In the visitors locker room after the game, Griffin was still in pain. He reached across his body to use his right hand to remove something from his left pocket.

“It hurt pretty bad,” Griffin said. “But I felt like I could get back out there and finish the battle with my teammates.”

There are 16 weeks remaining in a season that has only started. Griffin’s teammates need him for the long haul. They need him to be both accurate and wise. And if Jackson is truly going to make this work, he still needs to make many things clear to Griffin. Quickly.