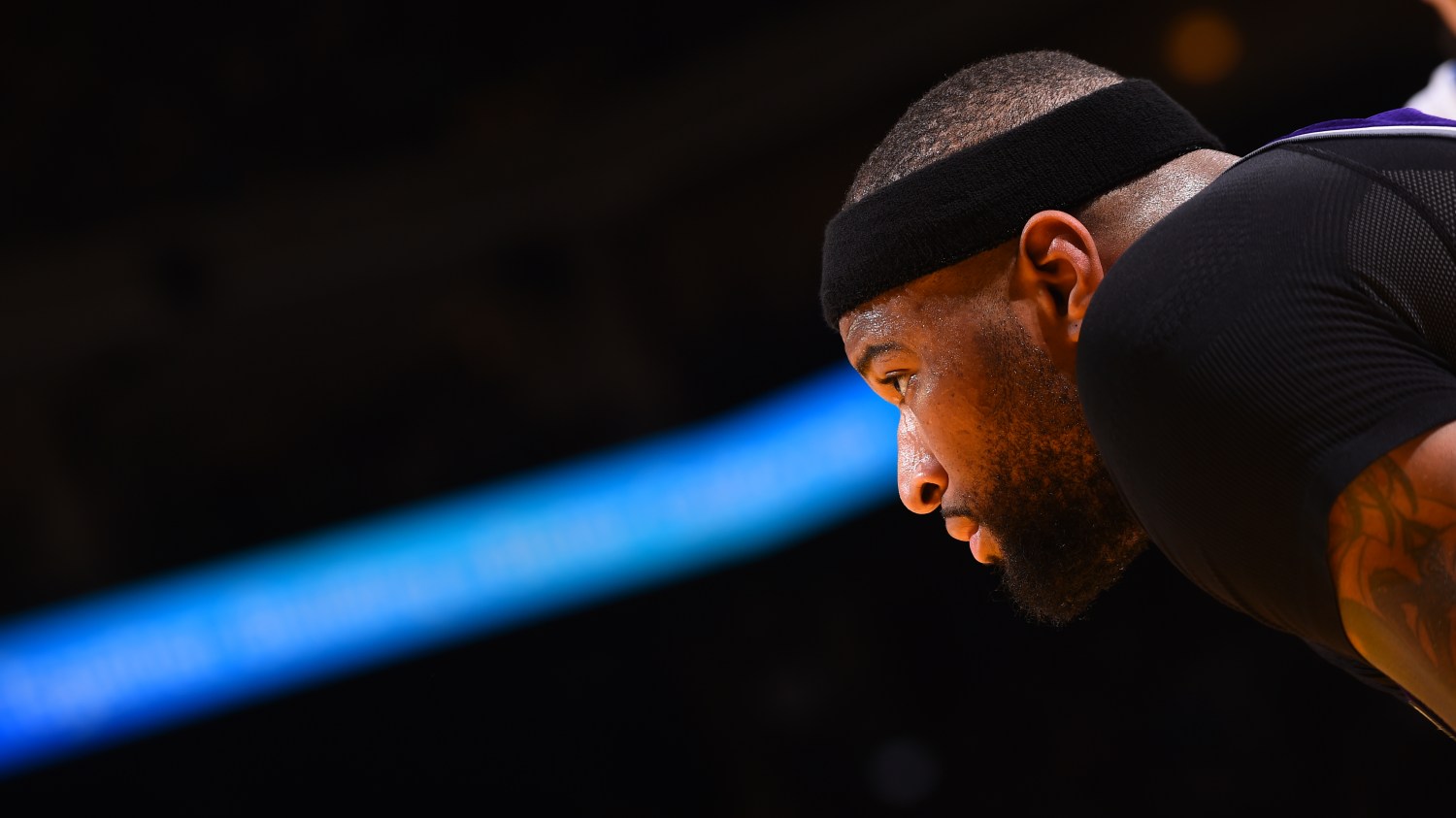 DeMarcus Cousins #15, previously of the Sacramento Kings, is seen during the game against the Golden State Warriors on February 15, 2017 at ORACLE Arena in Oakland, California. Noah Graham/NBAE via Getty Images
NBA

DeMarcus Cousins already appeared comfortable as he sat in the New Orleans Pelicans’ locker room right next to fellow NBA All-Star Anthony Davis. The city’s southern hospitality already reminds Cousins of his hometown of Mobile, Alabama. Davis, the Pelicans and their fans have welcomed him with open arms, too. And despite a blowout 129-99 debut loss to the 3-point-happy Houston Rockets, Cousins says he is “all in” with the Pelicans and confident after more practice and time that they will be a playoff team.

All these good tidings from the “Big Easy” have made the crushing blow of being blindsided with a trade from the Sacramento Kings to the Pelicans a little easier to deal with. While Cousins still loves Sacramento and Kings fans, the big man who’s big on trust will have a hard time ever getting on the same page with Kings owner Vivek Ranadive and general manager Vlade Divac, who he now views as “cowards.”

During the NBA All-Star Game on Feb. 19 in New Orleans, the Kings came to an agreement in principle to trade the three-time NBA All-Star and forward Omri Casspi to the Pelicans for guards Buddy Hield, Tyreke Evans and Langston Galloway, and a first- and second-round draft pick. Cousins spoke with The Undefeated after his Pelicans debut, reflecting on his emotional and hurtful last days with the Kings and his future in New Orleans.

After the trade, you were filmed being very emotional when you met with friends at a restaurant last Monday. What brought on those emotions?

It was because of my [Kings assistant] equipment manager [Miguel Lopez], who has been there since my rookie season. He was emotional right away. He just put me in a place. I haven’t cried in a long time. It just broke me down. It hit me like, ‘This s— is really happening.’ It was something that I never expected to happen. I was also told [a trade] wouldn’t happen, so …

It just hit. I just walked in and people started cheering. Something overcame me and I just broke down.

When did the Kings tell you that you wouldn’t be traded?

A week before the trade. The sick part about it is that Vlade came in my house with my agent [Jarinn Akana]. We sat in my theater and just talked. That was maybe three weeks ago. We sat there and [he] told me what moves he wanted to make. All of that. I just didn’t understand.

I got a text from the owner right before I went to All-Star. He was asking me about a player, how I felt about him and making a move. The owner! When it happened, I was just in shock. I didn’t understand.

When did you first get wind of being traded to New Orleans?

I heard the rumors before the game. But I’ve heard rumors the last four years about me being traded. It was like, ‘Whatever.’ When they sat me down with the media after the game, my PR guy at the time [Chris Clark] said, ‘There is serious talk about you possibly being moved.’

What would have been the correct way for the Kings to tell you about the trade?

Like a man. Like a professional. The more those guys talk, the more things come out. It’s just crazy. This ain’t something that happened in a few days. It has been discussed with more than one team. I just don’t understand.

Looking back, do you think that if you had done something differently you would not have been traded?

With all the changes from a coach, front office and ownership in Sacramento during six-and-a-half seasons and no playoff appearances, why did you still want to be there so badly?

It was something instilled in me. I am going to take it back to my AAU days. My first coach, Danny [Pritchett], I love him to this day. He was the first coach to pump me up to play basketball. Nobody wanted me. Nobody cared to put me on a team. Danny worked with me day and night. My freshman year in high school, I became a hell of a basketball player. We were just some low-budget AAU team. We were selling donuts and doing car washes to make money just to make it to the tournament.

All the big AAUs, Alabama Challenge, they started sending gifts and doing whatever to try to reel me in. My mom said, ‘Those people didn’t care about you, and all of a sudden they are going to try to reel you in. That’s not how you operate. You go with who cared about you from the jump.’ Even then, it wasn’t easy. I didn’t get the exposure because I wasn’t with the big team with Nike or Adidas. But I just stuck with it, and things gradually worked with me into my favor.

In high school, the same thing. Maybe when I was in college [at Kentucky], at my biggest stage, is when I got all the exposure. But to me, I’ve always gotten it the hard way. It never came easy for me. I’m kind of used to it. No matter what, I’ve always found a way to find some success. And when I was in that situation with [the Kings], I felt it was the exact same thing. My time will come when it’s my time. Those are guys that took a chance on me. I’m sticking to it. I’m going to make it work. That wasn’t the case.

Not only did you play for the Kings, but you were very ingrained in the community. Will you love the city of Sacramento forever?

Is there any part of you that wants to talk to Ranadive or Divac?

Nah. For what? It was a coward move, so I’m pretty sure I will get a coward response. For what? And I’ve seen this happen before. I’ve been there through all same types … I was there with [coach] Mike Malone’s [firing]. I’ve seen how they operate. I know what kind of answer I will get anyway. So, what is the point?

Are you glad you don’t have a game left to go back to Sacramento this season?

I wouldn’t say that. I love my team. I love my coaching staff. We really had a great bond. Just to fall apart like that, it sucks. I honestly thought we were going to make the playoffs. They had another plan.

How do you want to be remembered by Kings fans and Sacramento?

What did it feel like trying to decide where to take your private jet at an airport in New Orleans after the All-Star Game and trade?

I had my whole family in the van. I was just quiet. We were shocked. I had it set to go to Sacramento already. It didn’t make any sense [to go elsewhere], because I had to get clothes, a couple things and ship it out here.

Will it be hard for you to trust a general manager or owner again?

I’ve always had that issue. I’ve had personal conversations with my agent about that and the whole situation anyway. He tried to steer me in their direction. And I’m like, ‘Nah, I can see through that s—.’ I’ve always had my doubts. When it comes to that, I’m usually 90 percent. I knew it. But it was just told to me [no trade] so much.

How did it feel when you put on the Pelicans uniform?

Do you feel like the dust has now settled days after the trade was made?

You cautioned upon arrival that it will take awhile for the Pelicans to gel after this trade. What do you think about the blowout loss to Houston?

For some reason, I guess people expected a championship. I know the reality of it. We’ve had one practice and a shootaround. This isn’t something that is just going to happen overnight. Do we look good on paper? Yes. But being good on paper doesn’t win games.

How welcoming have Anthony Davis, the Pelicans and New Orleans been to you?

It has been amazing. It has been great. Everybody has been good. I went looking for a condo, so I had to go walking around downtown. The people. It’s crazy. I’m so comfortable here because it’s literally like home, Mobile. I’m used to those kind of people. It’s normal to me. It feels good.

So are you going to give the Pelicans a genuine shot at keeping you long term?