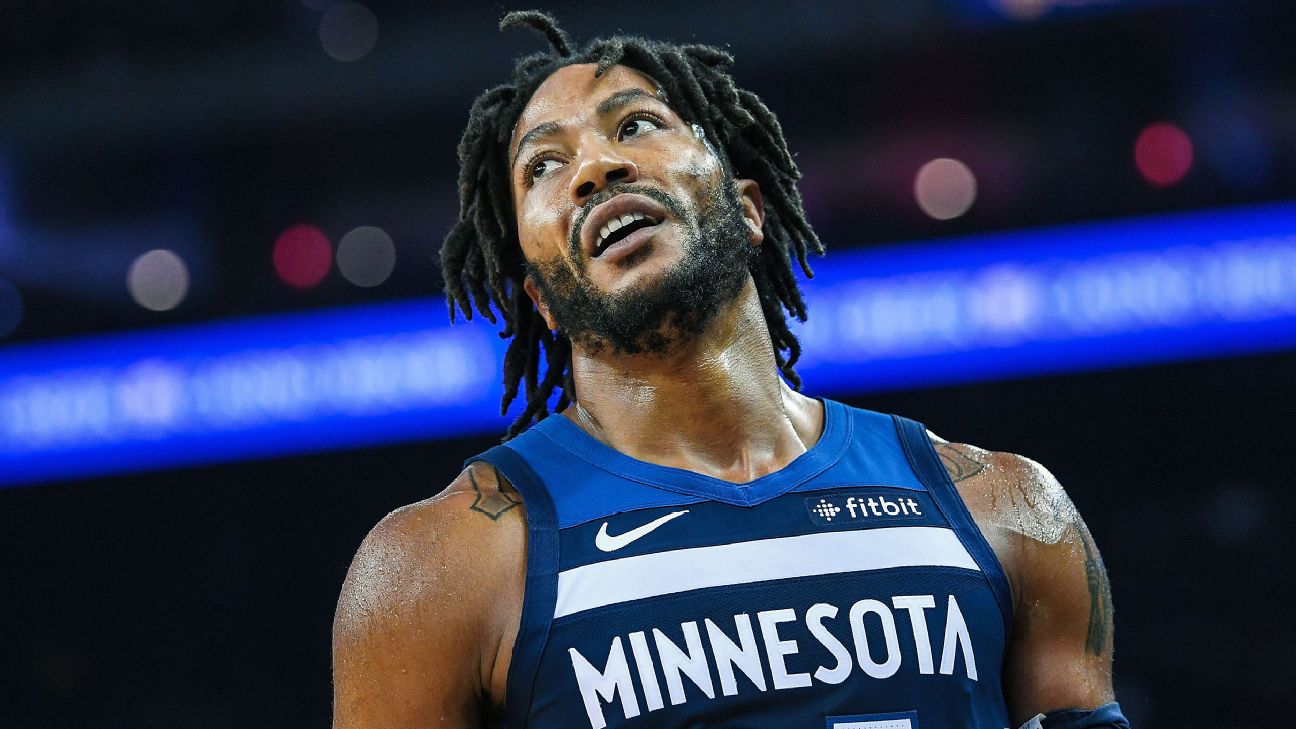 Derrick Rose: ‘Most guys would have been retired’

Healthier than he’s been in years, D-Rose is ready to prove he can still hoop

“ I am good, man,” Derrick Rose said after he reached down to knock on the hardwood floor for good luck after a Minnesota Timberwolves practice.

The former league MVP and three-time All-Star has had many lows in his career after his rapid rise to stardom. There have been injuries, leaves of absence and changes of jerseys — from Chicago to New York to Cleveland to Minneapolis.

But after his first healthy offseason in four years, Rose said he is finally in a “great space” mentally, physically and basketballwise.

“I am just rolling with the punches,” said Rose. “I know the hard work I put into everything. So, while I’m there, I am taking the role of being a leader to these young guys, being an example and maintaining my happiness.”

Not too long ago, Rose was on top of the NBA world. The No. 1 pick in the 2008 NBA draft, Rose was the 2009 Rookie of the Year and an All-Star in his second, third and fourth seasons. He averaged at least 20 points, six assists and three rebounds in each those seasons. And he earned the 2011 MVP award at just 23 years old.

But Rose’s career quickly wilted. He tore his left ACL during the 2012 playoffs, then missed the entire 2012-13 season following surgery. He received criticism for not returning that season and then played in only 10 games the following season after suffering a meniscus injury in his right knee.

Through it all, Rose gained a unique perspective on his haters and stayed true to himself.

“Even the people that were mad at me, they were mad at me because they wanted to see me hoop,” Rose said. “I understand that. You’re mad because I play some type of way that you like seeing and you want to see me out there. But I am going to do what is best for myself and sit out a year to get healthy enough to step on the court. …

“You have to know who you are. This whole time off or even getting injured, it was my way of tapping out. A lot of people don’t get the chance to tap out [and recover], and they get caught up into the propaganda. Winning MVP so young, doing this and doing that, I was caught in it.”

Rose was traded from the Chicago Bulls to the New York Knicks on June 22, 2016. During this time, Rose was also dealing with a civil lawsuit that accused Rose and two friends of raping Rose’s ex-girlfriend. In October 2016, a federal jury in Los Angeles found Rose and his friends not liable. (Rose’s accuser will reportedly have her appeal heard in November.)

Rose played well during the 2016-17 season, averaging 18 points, 4.4 assists and 3.8 rebounds in 64 games. But on Jan. 10, 2017, Rose was fined by the Knicks after he flew home to Chicago for family reasons without notifying the team before a game against the New Orleans Pelicans. And on April 2, 2017, he suffered a season-ending injury, tearing the meniscus in his left knee, which led to a fourth surgery.

“I have no time to be feeling spiteful. What I am doing right now is history in my own world.”

Rose joined LeBron James and the Cleveland Cavaliers as a free agent for the 2017-18 season. But the 11-year veteran took a leave of absence from Cleveland on Nov. 22 to contemplate his future after being frustrated by an ankle injury that kept him from being able to run. Rose rejoined the Cavaliers on Dec. 4 and told The Undefeated last Christmas that he was “not depressed.”

“Everyone has their own troubles,” Rose said. “Everyone does things in their own time. I just had to understand who I am and what I stand for. I prioritized things.”

But the Cavs would move on from Rose, who was traded to the Utah Jazz on Feb. 8, then waived and reunited with his old Bulls coach Tom Thibodeau on March 8.

Rose averaged 14.2 points and 2.6 assists off the bench in 23.8 minutes per game for the Wolves during the first round of the playoffs against the Houston Rockets. And Thibodeau, president and head coach of the Wolves, re-signed Rose to a one-year, $2.1 million deal this offseason.

“It is pretty easy just being around him, the amount of time I’ve been around him,” Thibodeau said. “I’ve watched him after he got traded [from Chicago] and followed him pretty closely. I knew he was capable. It was just a matter of him being healthy. Whenever he has been healthy he has played at a very high level. If you studied what he has done throughout his career, he has the ability to elevate his game throughout the playoffs.

“And then the fact that he is young. He is 29 years old. I thought there were a lot of pluses to [re-signing him].”

Rose, who spent the summer in Los Angeles, said it has been four years since he was healthy and able to have such an enjoyable offseason. With no rehabilitation or obligations, he went on family trips to Greece and the Turks and Caicos Islands. He also went to see J. Cole in concert in New York City, Drake in Los Angeles and Sam Smith in San Diego.

“It let my body heal,” Rose said. “I went to three concerts. I went on a vacay. Most of the time I wasn’t able to do that. My last year in New York I had a huge trip for my family planned to Turks but I had to get surgery, so I had to cancel that whole family trip because of surgery. That has happened numerous times where I planned something but it had to be canceled because of rehab. …

“I enjoyed myself this summer. This is the first time I have done that in a long time.”

Although Rose was surprised by the news that his Wolves teammate, Jimmy Butler, had asked for a trade, the situation has thrust Rose back into a starting role. During the preseason opener, the guard had 16 points and two steals in 21 minutes against the Golden State Warriors.

“I am going to run with any opportunity,” Rose said. “That is my goal. Get back in, and anything that comes my way I am going to grab it. I have no time to be feeling spiteful. I don’t want to say, ‘Look at me’ or ‘Look at what they did.’ I don’t have no time for that. What I am doing right now is history in my own world.

“If I wasn’t playing like I am right now, I could have went back home to my family chilling, because I am good financially. I was able to stay strong and focus. There are little kids looking at me, and my son is looking at me. I have to be an example for my son for times when he gets older and he’s bitching and complaining about what is going on. I don’t want to hear it. Go look at my résumé and handle what you have to handle. That is what I want from my kids.”

Rose, who has a 6-year-old son and 6-month-old daughter, turns 30 on Thursday.

“Me turning 30, it plays into learning who I am as a man, learning who my family is,” Rose said. “My mom is a worrier. She has faith, but she worries. The genetics, I think, rubbed off on me. When I was younger, I used to worry a lot. But I told myself, ‘All of this is out of my control anyway. Why am I frustrated with this, worried about that, when at the end of the day, I am happy and I believe in myself?’

“I never went in deep with it. I am like, ‘Man, I am not going to be like Mom.’ That was my goal. That is what ended up happening until I got perspective of the whole situation.

“I am in year 11 now. I tore my ACL in my third year. Most guys would have been retired. Financially, I have saved my money. It’s all about the love. I still feel like I can hoop.”