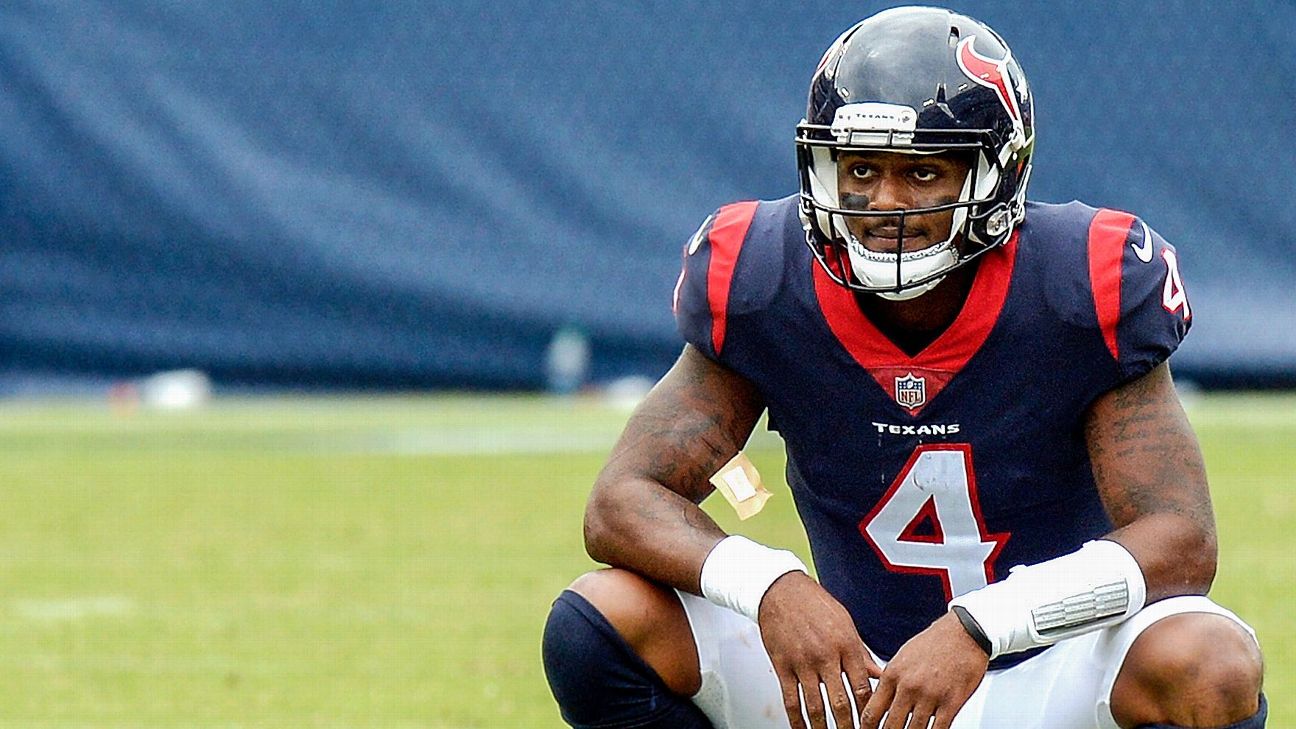 Houston Texans quarterback Deshaun Watson pauses on the field after time ran out in the fourth quarter and the Texans’ final drive ended in an NFL football game against the Tennessee Titans Sept. 16 in Nashville, Tennessee. The Titans won, 20-17. Mark Zaleski/Associated Press
NFL

Deshaun Watson and the intellect of black quarterbacks

Dear former superintendent, black quarterbacks got game too. See for yourself.

Heading into Week 4 of the 2003 NFL regular season, the Donovan McNabb-led Philadelphia Eagles were 0-2 after scoring a combined 10 points. McNabb, coming off two consecutive trips to the NFC Championship Game, struggled through those first two games: 167 yards per game, 45.1 completion percentage, zero touchdowns and three interceptions.

Forget that the Eagles had played the winners of the previous two Super Bowls, the Tampa Bay Buccaneers (2002) and New England Patriots (2001), in those games. No one could argue that McNabb wasn’t struggling at the start of the season.

Before that week’s games, conservative radio host Rush Limbaugh, then a commentator on ESPN’s Sunday NFL Countdown, said he believed the fourth-year starter was overrated. Limbaugh, not to be confused with a conspiracy theorist, claimed that the media “has been very desirous that a black quarterback do well” because of “a little social concern in the NFL.” (That noise you hear is Colin Kaepernick somewhere chuckling.)

In Limbaugh’s mind, any credit McNabb was given for the Eagles’ success — including, presumably, his runner-up performance in the 2000 MVP voting — was contrived by reporters based on the color of his skin. Never mind that decades of academic research found otherwise, including a 1977 study by researchers Raymond E. Rainville and Edward McCormick that found sportscasters for the three major networks (ABC, CBS, NBC) built a “positive reputation for White players and a comparatively negative reputation for Black players” during NFL games. Never mind Limbaugh was insinuating that the concept of “black quarterbacks” was like oil and water — two words together that were an oxymoron.

Fifteen years later, that line of thinking appears to have lingered.

On Sept. 16, Onalaska (Texas) Independent School District superintendent Lynn Redden, who is white, responded to a Facebook post about the Houston Texans’ loss to the Tennessee Titans, which ended after an error by Texans quarterback Deshaun Watson on the final play, by stating: “When you need precision decision making you can’t count on a black quarterback.” While Redden resigned from his position (forfeiting his $113,006 annual salary) and apologized for his remarks on Sept. 22, calling them “wrong and inappropriate,” his comments mirror those lobbed at African-American quarterbacks for the past half-century.

Since the first black quarterback was allowed to play in the NFL, he’s been told he couldn’t be counted on. Marlin Briscoe threw 14 touchdowns for the Denver Broncos in 1968, a rookie record Jay Cutler couldn’t surpass, yet Briscoe never played the position again for the rest of his career. Hall of Famer Warren Moon (the only black quarterback enshrined in Canton, Ohio) was MVP of the 1977 Rose Bowl but wasn’t invited to the draft combine and didn’t play in the NFL for six seasons after he left Washington. Lamar Jackson was a Heisman Trophy-winning quarterback who ran a pro-style offense at Louisville; he was one pick away from not being a first-rounder in 2018.

Black quarterbacks, so they’re told by critics, aren’t intelligent enough to play the position. They can’t read defenses or keep their composure in the pocket; their skills don’t “translate” from college to the pros. From Pop Warner to college, these quarterbacks — even Moon, as he was coming out of Washington — are told to switch to the skill positions of running back, wide receiver and defensive back. It’s where their “natural athleticism” is better suited. (Black quarterback success is more likely attributed to superior athletic skill by football broadcasters, research has shown, while white quarterbacks are deemed successful more because of their intellect.)

But black quarterbacks have over-indexed on successful. From 2013-16, each Super Bowl featured a black signal-caller setting up under center. Every college football championship since 2010 has featured a black quarterback, with five winning the title game. Even McNabb, whom the media supposedly tried to make successful out of thin air, went to four consecutive NFC title games from 2001 to 2004, the most recent leading to a Super Bowl berth. If only someone who flunked out of The Southeast Missouri State University was intelligent enough to see what a successful quarterback looks like.

But if those who look like Moon, McNabb, Cam Newton or Russell Wilson can’t be counted on, that’s news to the Texans. Bob McNair’s team went from starting the rat pack of Ryan Fitzpatrick, Case Keenum, Ryan Mallett, Brian Hoyer, T.J. Yates, Brandon Weeden, Tom Savage and Brock Osweiler over the years to Watson, who immediately threw for 19 touchdowns in his first seven starts last season, an NFL record.

It’s news to the Kansas City Chiefs as well. Through three games this season, quarterback Patrick Mahomes, who displaced the more “reliable” Alex Smith, has thrown for 13 touchdowns, also an NFL record. Peyton Manning never threw that many through three games.

The Seattle Seahawks have been to the Super Bowl three times since their inaugural season in 1976. Wilson has accounted for two of them. Newton, saddled with a notorious scouting report that called out his “enormous ego” and “sense of entitlement that continually invites trouble” and an underwhelming receiving corps, was named NFL MVP in 2015, just the second black quarterback to win the award.

Through three games this season, the Texans are 0-3 and Watson is by no means on anyone’s MVP list. But through just eight career starts, Watson is already the second-best quarterback in Texans history, arguably the best. And he’s projected to bring much success to a team that has won three playoff games since 2002.

You can count on that.