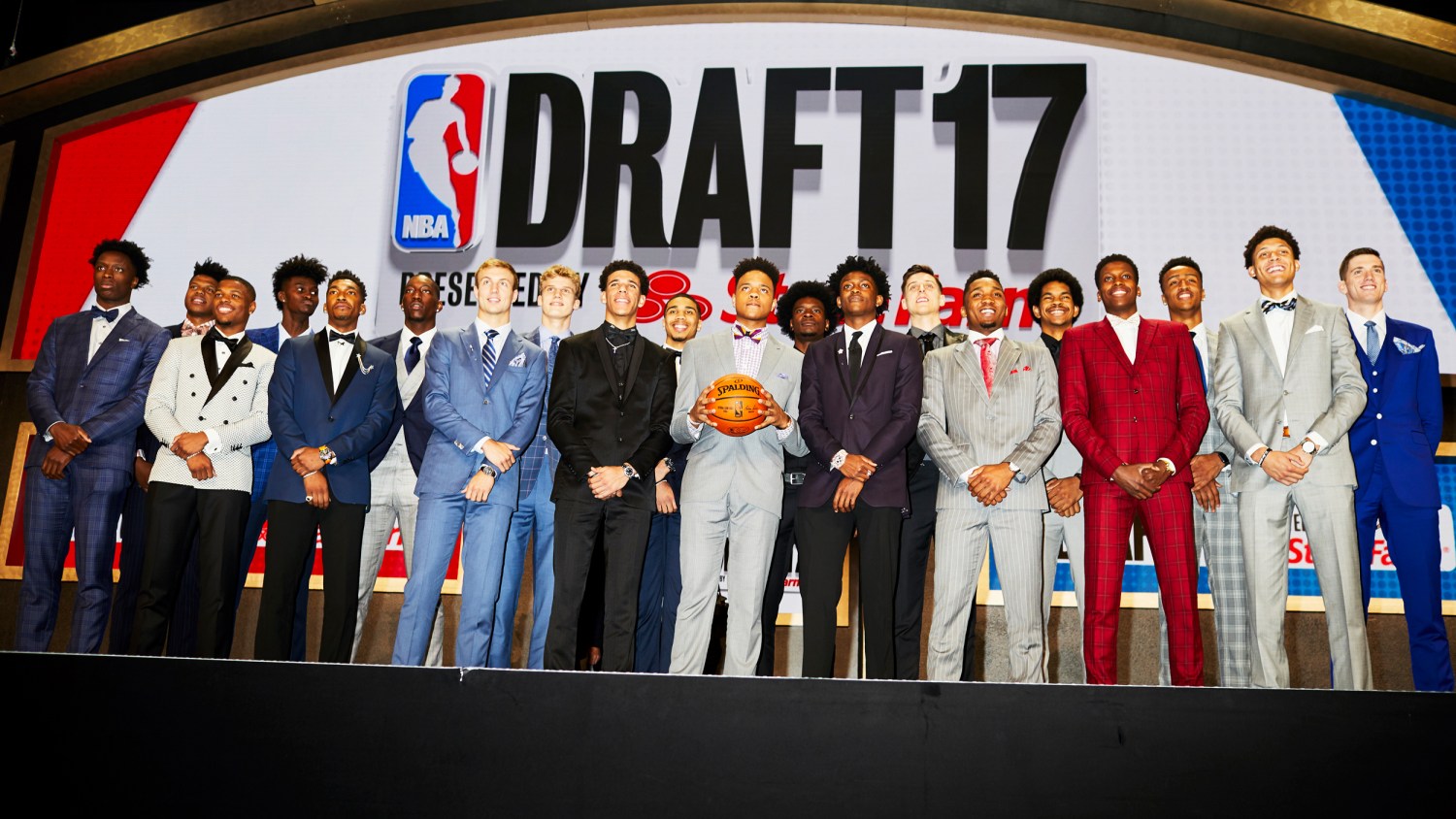 The league winners and losers after drafts, trades and shake-ups

NEW YORK — A satisfied LaVar Ball walked out of the Barclays Center in Brooklyn late Thursday night wearing a Big Baller Brand hat featuring the Los Angeles Lakers’ yellow and purple. The crowd booed strongly as he strolled with swag out of the arena. With his plan working, as his son Lonzo was drafted second overall by their hometown Los Angeles Lakers, the super outspoken LaVar threw his cap into the stands as the fans fought for it. LaVar kept it moving.

“I ain’t going to say nothing to all the naysayers,” Ball told The Undefeated. “They mad right now because they keep moving forward. I ain’t gonna waste my time with that. I got to be 100 percent going forward. I don’t dangle with nobody 15 percent over here. They can’t stop me from what I’m doing. They can sit back and hate. That’s good.”

You may not like what LaVar has to say. You might think the way he leads in boisterous fashion is a disservice to his three basketball-playing standout sons.

But sometimes the truth hurts. And the truth to LaVar Ball’s haters is he is winning big right now. It’s almost like a Hollywood script the way it is playing out for the Ball family.

Lonzo Ball leads the winners in The Undefeated’s Winners and Losers of the 2017 NBA Draft.

Lonzo starred at point guard for the Bruins as a true freshman and brought the program back to prominence. Meanwhile, Hall of Famer and Lakers legend Magic Johnson became president of the only NBA franchise he has ever known. Johnson became a regular at UCLA games and quickly fell in love with Lonzo, who doesn’t have his father’s voice but does exude swag, evidenced by his all-black draft suit with a Big Baller Brand bow tie.

LaVar, the family’s Big Baller Brand leader, asked for a billion-dollar shoe deal. Nike, Under Armor and Adidas understandably laughed out loud. But all the wild interviews that LaVar did on sports television shows and in print gave the Balls free publicity for their budding shoe company, with perhaps millions of dollars in presales now to boot.

“The brand is getting a lot of positives. We good. We good. They know what it is. From the three Ball brothers, to the Big Baller Brand, to be billion, billion and billion. We good,” LaVar said.

The Lakers landed the second overall pick in the 2017 NBA draft by the literal luck of the draw in the draft lottery. The Boston Celtics originally had the first pick but had no interest in Lonzo Ball, so Magic and the Lakers got their coveted local kid. Big Baller Brand’s one-and-only leader got the last laugh, and you know he isn’t afraid to let you know.

“I don’t do no dreaming,” LaVar said. “I just set goals and then go from there, because you can dream and then be like, ‘Ah, I didn’t get it.’ I was dreaming a perfect script. I’m like that. Can’t you tell? I script it all like this.”

Much ado was made about nothing — for now — as New York Knicks president Phil Jackson’s trade discussions with several teams for young standout forward Kristaps Porzingis were fruitless, to his fan base’s delight. The legendary former NBA coach managed to get both of the Knicks’ stars, Porzingis and All-Star forward Carmelo Anthony, on his bad side in recent months. Speaking of Anthony, Jackson also wasn’t able to trade him on draft night after ripping him and killing his trade value for months.

So, where do things stand with Porzingis?

So, what about Melo?

“I’m not here to talk about that right now,” Jackson said.

The Knicks drafted Frenchman Frank Ntilikina with the eighth overall pick. New York filled a desperate need at point guard. The 6-foot-6 Ntilikina is strong defensively and has a 7-foot wingspan.

“Happy to be back in the draft and have a chance to pick this young man as our eighth pick. Welcome, Frank,” Jackson said.

The addition of Ntilikina and no trade of Porzingis or Anthony left long-suffering Knicks fans happy for the night. Even so, at the end of the draft some fans started chanting, “Fire Phil …”

After years of bad drafting, the Kings were the kings of the draft.

The Kings needed a point guard and viewed Kentucky guard De’Aaron Fox as the second-best prospect in the draft, according to sources. Sacramento was able to select the ultra-competitive speed demon with the fifth overall pick. Fox was excited to join long-rebuilding Sacramento where a possible starting point guard spot awaits him.

“De’Aaron has a winning game and winning personality,” Kings vice president Scott Perry told The Undefeated. “He’s blessed with excellent athleticism, great speed with the basketball and has a very good feel for the point guard position. He’s someone who lights up the room with his personality. He has the type of personality that will be very infectious with his teammates. We were extremely happy they were there when we were picking.”

Perry is new to the Kings as their vice president of basketball operations, but this was the longtime NBA front office executive’s 17th draft. Having such strong experience in the draft room was key for oft-criticized Kings general manager Vlade Divac. The Kings traded the rights to the 10th overall pick, former Gonzaga forward Zach Collins, to the Portland Trail Blazers in exchange for the rights to the 15th (ex-North Carolina swingman Justin Jackson) and 20th (ex-Duke center Harry Giles) overall picks. Jackson is a 2017 first-team All-American coming off a national championship. Giles was considered the best prospect in the high school class of 2016 by ESPN.com before two knee surgeries. Sacramento also selected former Kansas guard Frank Mason III, the consensus 2017 NCAA Player of the Year, in the second round with the 34th overall selection.

“I’m very pleased we got high-character and talented young players all coming from winning programs,” Perry said. “Guys that are used to winning. One that came from a national championship. They understand team. They understand sacrifice and all the things necessary for a culture of winning in Sacramento.”

For the first time in a while, Kings fans were able to stick out their chests proudly.

Dwyane Wade informed the Chicago Bulls on Wednesday that he would exercise his $23.8 million player option to return to the team next season. The next day, Wade learned that his All-Star backcourt mate Jimmy Butler was traded to the Minnesota Timberwolves. In return, the Bulls acquired young guard Kris Dunn and injured guard Zach LaVine and drafted Arizona 7-footer Lauri Markkanen with the seventh overall pick. It appears the Bulls are instantly in a rebuilding youth movement.

Don’t feel sorry for the 35-year-old Wade from a financial or being-at-home standpoint. But it would be horrible to see the future Hall of Famer finish his career with a struggling young team, like Kobe Bryant did with the Los Angeles Lakers. This situation is certainly very fluid, and out of respect for Wade it wouldn’t be surprising to see him moved somewhere else.

Guard Markelle Fultz has received criticism for winning just nine games during his lone college season as a freshman at Washington. The Philadelphia 76ers didn’t buy into it, as they selected Fultz with the first overall selection of this year’s draft. Mike Jones, Fultz’s coach at DeMatha Catholic High School, said his former star player’s critics will eventually be proved wrong.

“It’s crazy that people question whether or not he is a winner,” Jones said. “He’s won at every level he played in except for the last four months at Washington. When they criticize him, they are comparing him to the other guys that are getting ready to get drafted too. All those guys played on teams with first-round draft picks.

“No offense to Washington, but you can’t pick another certain NBA player that is on their roster. Those guys [Marquese Chriss and Dejounte Murray] left a year before Markelle got there. He led a team that really wasn’t as talented as a lot of other ones. He was at a disadvantage, so I don’t think it’s fair to compare them. And if you look at his entire basketball résumé, you can’t question whether he is a winner.”

The Indiana Pacers are in a tough position trying to trade All-Star guard Paul George. The 2018 free agent wants to return to his native Los Angeles area to play for the Lakers or perhaps the Clippers. Any other intrigued team, with the possible exception of a contender, would have to assume he would be just a rental next season.

The 2017 NBA draft may have offered the best chance to trade George for a high draft pick. There was talk of the Pacers having conversations with the teams that owned picks two through five for George, but nothing materialized. Now that the draft is over, the Pacers might have to take part in a fire sale to get something for the four-time NBA All-Star, who is in his prime. Hall of Famer Larry Bird made a good move by recently leaving his role as the Pacers’ president with this stressful situation hanging over the franchise.

The Timberwolves suddenly have one of the NBA’s top trios in Butler, forward-center Karl-Anthony Towns and swingman Andrew Wiggins. With regular trade bait Ricky Rubio still around at point guard and a talented young center in Gorgui Dieng, expect Thibodeau to get the new-look Wolves back to the postseason for the first time since 2004, when Kevin Garnett was starring for the team.

Ex-UCLA freshman center Ike Anigbogu was considered a first-round prospect but dropped to the 47th overall pick by the Indiana Pacers because of knee concerns. … Ex-California forward Ivan Rabb was selected with the 35th overall pick by the Memphis Grizzlies but may have been a lottery pick had he entered the draft a year earlier as a freshman. … Anigbogu’s and Rabb’s draft positions should be nothing but a number, as both will be of great value to their teams. … Former Nevada-Reno sophomore forward Cameron Oliver went undrafted despite being in Brooklyn, but he is expected to sign with the Houston Rockets. … Ex-Villanova forward Kris Jenkins is best known for hitting the game-winning 3-pointer in the 2016 NCAA title game to beat North Carolina, but he went undrafted and is expected to sign with the Washington Wizards.