Washington’s NFL franchise said on Friday it will undergo a “thorough review” of its name following pressure from sponsors, fans and players. That came one day after FedEx, which sponsors the franchise’s stadium, asked the team to change its name.

Nike also removed all of the team’s gear from its online store. Amid a historic uprising for Black lives, FedEx and Nike’s maneuvers are perhaps the most significant threat leveled against the Washington team’s brand. These corporations are standing against racism, brought by pressure from investors who were responding to years of Native activism.

The team’s name, “Redskins,” which I print reluctantly, is, according to many historians, linguists and Native people, a racial slur that references Native Americans’ skin color and — here is the more troubling claim — the bloody scalps of Indigenous people taken as bounty by white colonists.

A year and a half ago, in the beforetimes when we still had sports, I wrote about the name of Washington’s football team. It’s a story that has become a sort of rite of passage for Native reporters. Most Americans don’t know much about us Indians, except that some of us aren’t so enthusiastic about our race being used as a mascot. I personally don’t like seeing racist caricatures of my people on the crest of a hat or the front of a jersey – or even worse: witnessing a drunk fan don a faux headdress and some war paint. But I’ve also never believed this was the thing I wanted to put my energy into. To be honest, I always felt like Native people, who fall to the bottom of nearly every measurable statistical category of misery in this country, have bigger problems.

We come from beautiful people: Black and Native. We are most beautiful when we show up for our people and show up for each other.

When I moved to Washington in 2017, I felt like I was surrounded by that umber buffalo, nickel-head logo. You’ve seen it: the Native guy with the braids, feathers and Roman nose, looking like he belongs outside some midcentury cigar store. The part about it that bothered me most is that I saw so many Washington natives wearing it, people of the Washington that I’m ashamed not to be a part of, Chocolate City. I can’t tell you how many times I’ve seen Black people on the streets of the city where I now reside wearing that logo — proud fans of their hometown team — and wanted to say something.

But on this issue and in this city, I never knew how to begin or where to start. How do you even have that conversation — a conversation that implicates many great Black athletes and fans in something that I think is racist? The reservation and the ghetto might be products of the same system, as a recent column in The Undefeated put it, but it’s not like the U.S. has ever sponsored an exchange program between those two places. And, sure this continent might be my people’s land, but who was I to come to Chocolate City and tell anyone how to cheer for their team? It’s a hard conversation to have, and hard conversations are easiest not had. 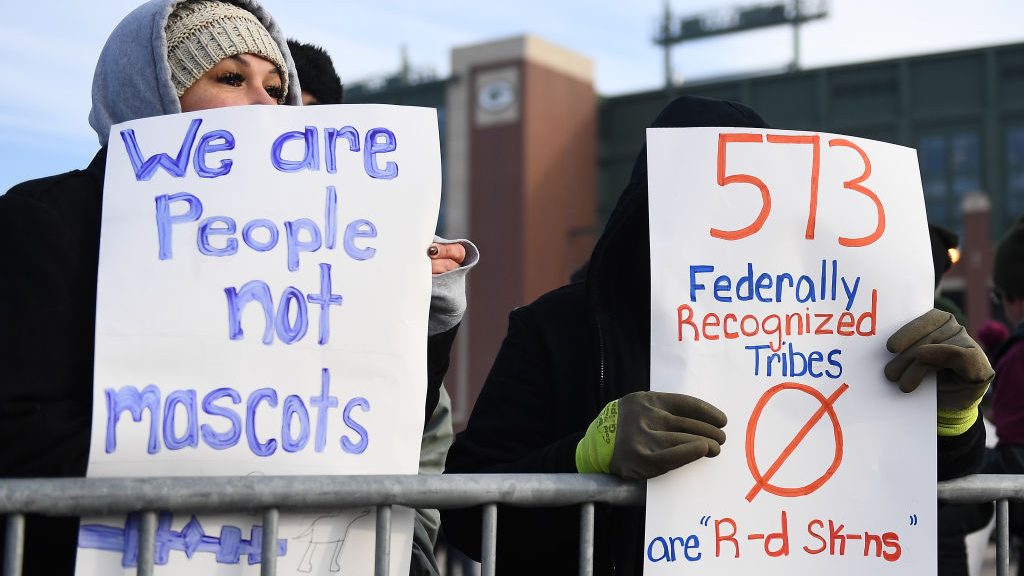 The night before the Washington-Houston Texans game in 2018, the one I reported on for this publication, I got roaringly drunk. Not like buzzed or tipsy or dizzy. I’m talking bin-by-the-bed-slept-in-hungover drunk. On the ride home from the bar, I asked my Lyft driver, an African immigrant, what he thought about the Washington team’s name. He told me that I should be grateful. That my people were civilized by this country. That the team’s name celebrated us. I nearly fought him right there in his car. The next morning, already feeling defeated, I almost didn’t go to the game.

Looking back on it now, I think I avoided conversations like that because I knew they might hurt. I put off writing about mascots for so long because I didn’t want to admit the power they had over me. When I see that symbol, I see a mockery of my relatives and ancestors that celebrates how we were conquered; how our corpses and body parts became trophies of war for the white men who stole our land; how I, a conquered savage, am dirty and condemned to a life of alcoholism, misery and irrelevance — condemned to the past and the 50-yard line. What else are people saying about you when they turn your race into a less-than-human mascot? When they insist that, despite your protests, they’re honoring you? I imagine the producers of minstrel shows employed a similar argument. As Yohance Maqubela, the son of civil rights activist Dick Gregory, pointed out to me when I wrote my original story, there aren’t any sports teams called the “Strange Fruit.”

Last week, a fake story circulated on Twitter, claiming that Kansas City’s Super Bowl-winning quarterback Patrick Mahomes wouldn’t play next season unless his team changed its own problematic name. I was so excited by the news, I didn’t even check my sources. I texted my mom and her boyfriend and posted in the Slack of my work: “MAHOMES.” The idea that a Black athlete would stand up for us was just about the most exciting story I could imagine. I was beyond bummed when I learned it was a hoax.

When I interviewed Maqubela in 2018, he told me he believed that Black athletes and the local community were the key constituencies to mobilize if you were serious about changing the name. Yes, we had to hit Snyder where it hurt, but to achieve real justice, we also needed to educate and change minds. It’s a beautiful idea. Who wouldn’t want to see that? Black people showing up to enact a small measure of justice for Native people. Maqubela told me he’s already doing his part. He has those hard conversations that I shied away from. He even wears a shirt with the Washington team’s logo, but instead of the R-word, it says “Rethink.”

A few weeks back, I walked down 16th Street to the newly renamed Black Lives Matter Plaza to take in the Juneteenth celebrations. During the national reckoning brought on by the movement for Black lives, I’ve ventured down there, the epicenter of activism in Washington, a handful of times because it gives me hope that we can uproot the racism of a nation rooted in genocide and slavery.

Before I left, a crowd of kids from Southeast started a cypher. I hung around the edge of the crowd, smiling at the rhymes and marveling at the pipes on one of the big guys. The irony of being an Indian in this city is that I’m not native here. But that day, I felt lucky just to be an interloper. We come from beautiful people: Black and Native. We are most beautiful when we show up for our people and show up for each other. Let’s make sure all Black Lives Matter. And let’s change this name.

Julian Brave NoiseCat is a correspondent for Real America with Jorge Ramos, contributing editor at Canadian Geographic and freelance writer whose work has appeared in The Guardian, The Nation, The Paris Review and many other publications. A proud member of the Canim Lake Band Tsq'escen, he resides in Washington, D.C.