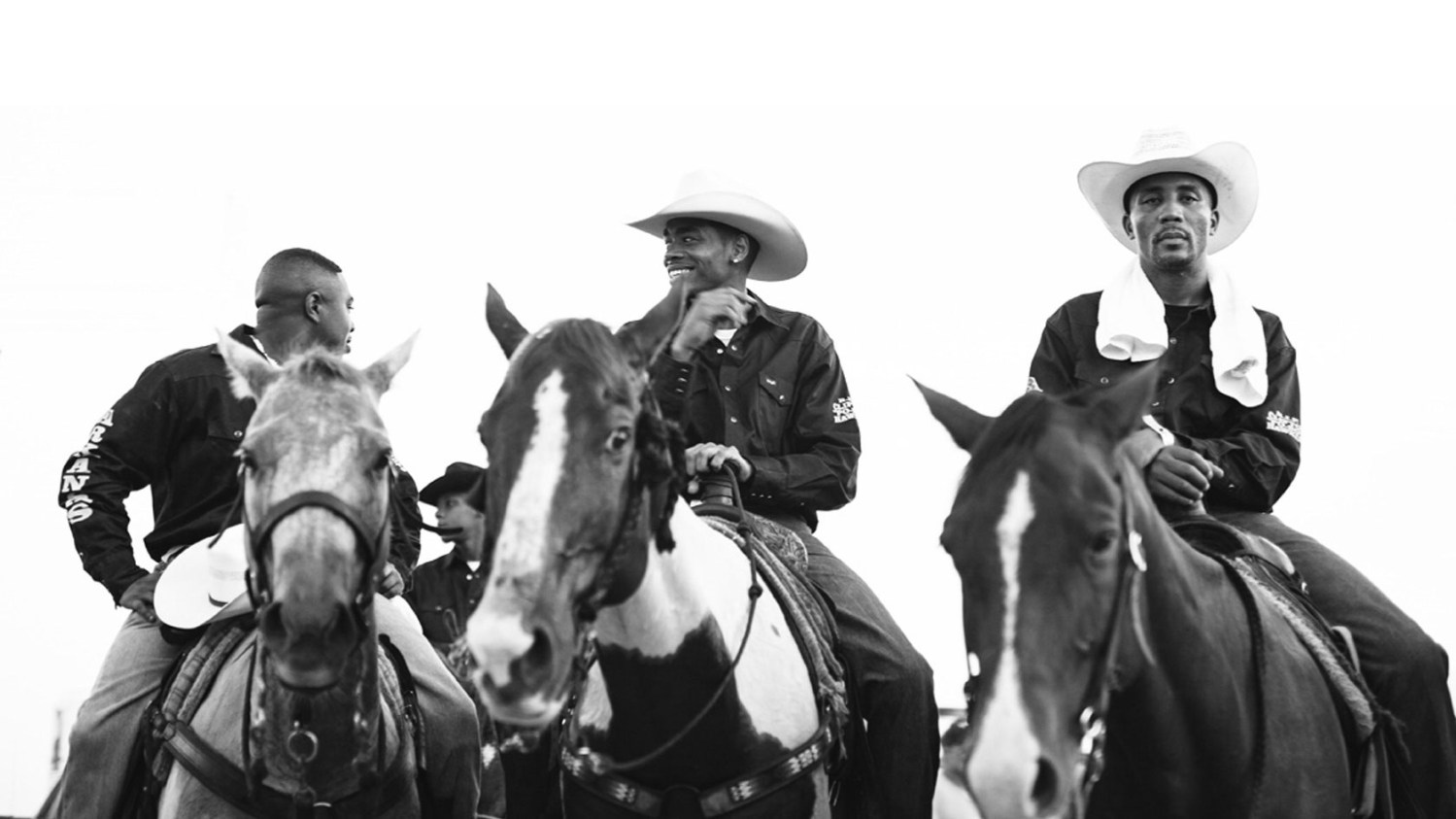 A still from the documentary THE BLACK COWBOY.
The Black Cowboy

Documentary in production lends insight into African-American cowboys and rodeo

Denard Butler is not the typical cowboy in Checotah, Oklahoma, known as the steer wrestling capital of America. He holds an advanced degree in behavioral health and worked for a time as a therapist. He speaks routinely about “the laws of the universe” and quotes Bible verses.

Of all Butler’s attributes and uniqueness to his profession, his race is the most surprising — and polarizing.

At 33, he is a third-generation cowboy from Georgia, just outside of Atlanta, meaning he went into his chosen career aware of the challenges that come with it because he was not white. And he chose it anyway.

“It’s a passion,” said Butler, an accomplished steer wrestler who also owns a trucking company. “When you’re black and competing in places like San Juan Capistrano, California; Price, Utah; and Prescott, Arizona, you’re not going to see many people who look like you. So you will hear the N-word. A lot. I use it for power. I feed off it. I tell myself, ‘You’re going to read about me. You’re going to get sick of seeing me.’ I want it more than most, and so I use it as fuel. My belief system is different.”

Butler’s story, which includes four bar fights with white cowboys or patrons who put their hands on him, is part of a revealing documentary in production that promises to lend heretofore unknown insight into black cowboys and their history in America.

Charles Perry’s film, The Black Cowboy, takes a high-definition and comprehensive look at the legacy of African-Americans as cowboys, which dates to the beginning of the lifestyle, up to today’s influx of black cowboys in Oklahoma and other places across the country.

Perry, of Carson, California, said he “escaped” suburban Los Angeles to play college basketball at Northwest College in Wyoming in 1994. In 1997, he visited a friend’s home in Lewistown, Montana, and attended a rodeo.

“And there was this black kid participating,” Perry said. “And it was loud in my mind: ‘That kid must be adopted. A white family must have taken him and made him become a cowboy.’

“That thought stayed in my mind as I drove from Georgia to Portland, Oregon, [in 2014] with a friend. We ran across the Okmulgee Black Rodeo in Oklahoma. I was in a daze, seeing all these black cowboys. I didn’t understand what was going on.”

But it was at that moment that the budding filmmaker embraced the idea for his first major project. He had worked with others on small films where he served various roles. Perry also worked on films as an extra or bit, nonspeaking roles and said he would stick his head in directors’ discussions, and “they never told me to get out, so I learned a lot.”

In April 2015, the resourceful Perry took a job driving a U-Haul truck from Charlottesville, Virginia, to Portland. He drove “directly to Okmulgee, to tell the Okmulgee City Hall my plans of making the documentary.”

He met Delta Higgins, who worked at City Hall and who has been a guiding force for Perry — “my angel,” he called her.

“It is an incredibly important yet omitted story within America’s narrative,” the 41-year-old Perry said. “How often do we see now or in the past the cowboy of the Wild West represented as a black man or woman? Very rarely … and yet, they were there in important ways. Black cowboys and their story have been neglected.”

Perry has spent the better part of three years traveling the country, mostly by car, to research, meet and film black cowboys in all points of the country. He said the film should be completed in time for entry into the renowned Sundance Film Festival next summer. He also plans to enter it at Cannes, Tribeca and other festivals.

He used online crowdfunding to raise $25,000, which allowed him to hire Emmy-nominated cinematographer Erik Angra and respected African-American photographer Ivan McClellan, who are working at discounted rates, Perry said, because they “see the vision of the film.”

Perry’s younger brother, Marcus, is on the staff, as well as two high school friends — J.R. Redmond, who won a Super Bowl ring as a member of the New England Patriots, and Tony Harvey, who once played for the Utah Jazz of the NBA — who serve as executive producers.

“It’s been a grind, something Nate Parker [director of Birth of a Nation] told me last year at Sundance what it would be,” Perry said. “But I’m determined.”

The total budget of the film is $220,000, and Perry said he used his savings and supplemented the support and donations he’s received by eating less and working side jobs more. “I will pass up on an extra hamburger but not skimp on using the best-quality cameras we need,” he said.

Mostly, Perry said, “I know how to hustle” to keep afloat. To support himself and the film, he edits online video content, including short films and music videos.

“So I’m taking my time, not rushing,” Perry added. “This thing is deeper than I thought when I started.”

Perry, for instance, has learned that the term “cowboy” originated when farmers would instruct black farmhands to “go get that cow, boy.”

He learned that Oklahoma, first home of Native Americans, was a haven for African-Americans who fled the South in the 1800s. Blacks owned land and built thriving communities.

Government officials asked Congress to designate Oklahoma as a “black state” or “Negro Colonization.” It never happened, but the influx of African-Americans produced countless farmers and, yes, cowboys.

“I grew up playing at Will Rogers Park and Will Rogers Beach in California, so to learn the most famous black cowboy, Bill Pickett, was Will Rogers’ right-hand man, well, that was something of a confirmation for me that this was a film I should make.”

Prominent in the film is the story of Pickett, who is credited with creating in 1903 the sport of “bulldogging,” now known as steer wrestling. It is a rodeo sport in which the cowboy rides on a horse alongside a steer, leaps onto the bull and wrestles it to the ground by its horns.

Pickett is a cowboy legend and was the first African-American to be inducted into the National Cowboy Hall of Fame of the National Cowboy & Western Heritage Center in Oklahoma. He died in 1932 after being kicked and stomped in the head by a horse when he was 61.

His legacy did not die with him, however. Pickett also is in the Rodeo Cowboy Hall of Fame and has been honored with the annual Bill Pickett Invitational Rodeo in Oklahoma. Pickett’s emergence spawned a wave of black cowboys that, the documentary will show, has continued over all these decades.

“It’s a good thing this story is finally going to be told,” said Clarence LeBlanc, 65, a former black cowboy who retired 13 years ago, but not before twice claiming the world steer wrestling championship (1983 and 1990). “Every ranch since the beginning had black cowboys on them. But when you saw the movies or heard the stories, we were excluded. This film will help let people know our impact.”

LeBlanc said he was quite “uncomfortable” much of his career because “prejudice was strong. When I started out, it was really bad. Most schools weren’t even integrated. Over time, the white cowboys began to get to know me because we were seeing each other every week at different rodeos. Many of them let go of the ignorance.

“But the towns we went to, those people had never been around black people before, and they didn’t want us there. And they let us know that.”

He said he never felt his life was in jeopardy, but “I knew when I was in a place that was more [volatile], and so I stayed close, I didn’t venture off at all. … But I don’t think there was anything anyone could do to run me off, I loved the sport so much.”

That love among African-Americans continues to rise, according to Perry, who estimates there are more than 100,000 black cowboys in the United States. Most are in Oklahoma, but others are in Georgia, California, Arizona, Texas, North Carolina, Mississippi and Arkansas.

“There are small pockets of black cowboys in many parts of the country, and we visit those places and the people wonder why we want to take their pictures,” Perry said. “It’s like when blacks go to Japan and the Japanese want to take our photos because they don’t see many black people. That’s how it is with the black cowboy.”

This is news to many, including a man Perry recently encountered at a party in Boston. Perry said he wears a hat and T-shirt with “TheBlackCowboy.com” on it almost everywhere he goes. “This was a smart, educated white man,” Perry recalled. “He noticed my hat and I told him a little about the history of the black cowboy, and he said no way in the world was what I told him true. He said, ‘Oklahoma is white.’ He just didn’t want to believe it.”

Perry said he has received skepticism from some in the cowboy community because others before him had committed to documenting its history of blacks in the profession but failed. So many did not “take me seriously,” he recalled.

To gain trust, he paid out of pocket for a sizable portion of historic footage — and has been consistent in his efforts to complete the movie.

“I’m excited about seeing the film myself,” Butler said. “I haven’t studied the black cowboy. I am into Warren Buffett and Napoleon Hill. But do know the black cowboys have two things in common: talent and perseverance. That’s the only way to make it with all we have to go through because of our race.”

And don’t forget money, added Butler, who also raises and sells horses on his ranch. “Really, you have to be close to rich, or have someone in your family with money, to compete,” he said. “My family isn’t rich, but my parents made some real sacrifices to get me out here.

For LeBlanc, who has lived in Oklahoma all his life and raised prize-winning horses, seeing the number of black youths in rodeos makes him proud. “I know, in at least a small way, we paved the way,” he said. “I have a little grandson, and I can’t wait for him to get old enough to get out there.”

In the end, Perry anticipates a work that enlightens and entertains. “Our goal is not only to bring their story to the mainstream but to establish resources for young aspiring cowboys and cowgirls to follow their dreams,” he said. “I have almost been like a detective, digging for the truth, and it’s been fun.

“Imagine being a cowboy in a rodeo — the sole black person in an entire arena. It’s as close to Jackie Robinson as you can get. This is a history that has been hidden in plain sight … while going on today.

“Well, we’re bringing it all to light with this film.”