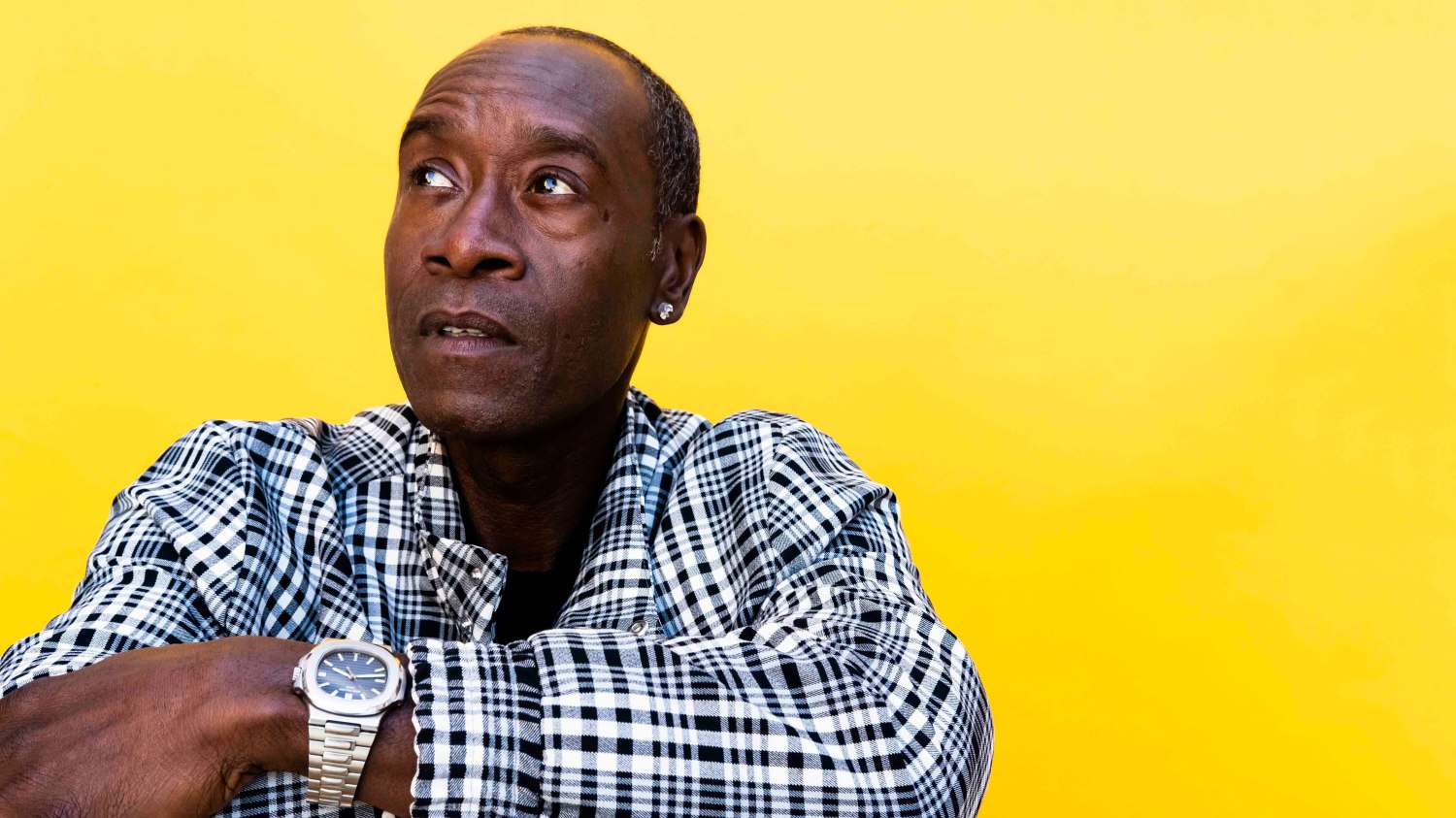 Don Cheadle, the award-winning actor, director, and producer, will reprise his role as War Machine in “Avengers: Infinity War.” Oriana Koren for The Undefeated
Hollywood

Don Cheadle says the time for makers is now: ‘You gotta create that thing that you want‘

Don Cheadle has nabbed a couple of Screen Actors Guild awards, a couple of Golden Globe awards and an Oscar (as a producer for 2004’s Crash), and he’s been nominated for Emmy awards and an Oscar for his acting work in 2004’s Hotel Rwanda. He even collected a Grammy for the Miles Ahead soundtrack, for the 2015 biopic that he wrote, directed and starred in.

But one award he’ll likely never win? Top dog in fantasy football. He tried it for the first time while he and the superstar cast of Avengers: Infinity War were shooting this latest Marvel masterpiece — and he finished dead last. Because of that, he was a target of explicit trash talk from the people who portray some of the world’s most beloved comic book superheroes. Trust Cheadle: He won’t be putting himself through that again. He will, though, talk about sports films, black filmmaking in a post-Black Panther world — and why he doesn’t like taking the easy way out.

You excel at bringing nuanced, gritty characters to life. But in the Marvel Universe, you get to have a little fun.

Things flying, you’re shooting, you’re in fights and battles. You get to do those things that I did, anyway, when I was a little kid. I’m a physical actor, so I love to do stunt stuff. I love to do the stuff on the wires. … War Machine gets to have a sense of humor and cut up … but he’s also dealing with some heavy stuff. To be able to do that kind of a range in a movie like this, where it could just be about green screen and people in CGI [computer-generated imaging] battles, it’s nice [when] you get to dig in a little bit sometimes and act.

Infinity War is coming right behind Black Panther, a film that has opened conversations about predominantly black films doing well here and in overseas markets. You’ve been verbal about fighting to get funding for passion projects and black stories.

Look at the history of black people in the movies. … You had the blaxploitation period, where there was a lot of work for black actors in a certain genre. Then there’s a fallow period. Then an upturn, like in the ’80s, but it was all around gangster and ’hood movies. Then it kinda went fallow again. Now we’re in this moment again where they can’t find enough makeup and hair people for black people because so many of them are working. All the barbers are working. All the makeup people for black people are working. If you took the 10,000-foot perspective, if you’re gonna be honest … this is what’s happening now. And I don’t know that it means this trend is going to carry forward. But while we got the door open, get in here, get in here, get in here. Get stuff made.

“They can’t find enough makeup and hair people for black people because so many of them are working. All the barbers are working.”

What’s the key to your consistency?

Desperation! A constant fear that it’s all gonna be over one day and everyone’s gonna find out that I’m a fraud.

Every time we’re done with a job, that’s it. You’re unemployed. You want to believe that, yeah, something’s gonna happen and I’m gonna be good. But you don’t know. There’s those five stages of the actor’s career that we talk about all the time: Who is Don Cheadle? Get me Don Cheadle. Get me a young Don Cheadle type. Get me a young Don Cheadle. Who the hell is Don Cheadle? I started my company for job security, you know? Because there wasn’t a lot coming down the pipe … that I wanted to do. So you gotta create that thing that you want.

You’ve been with this character for at least eight years now. How has that changed things for you? Has being part of this franchise gotten you through more doors? Or attention for your passion projects?

It’s allowed me to pay for them. It’s allowed me to spend some change and not need it to make money, do it because I want to do it, and if this one doesn’t hit, then I’m still fine. Miles Ahead, I spent my own money on that movie, and it didn’t make $4. It was an expensive film school for me, but it was still important for me and my career, a necessary process I had to go through. Having the Avengers allowed me to take that hit and not have to sell stuff. By the time I got into these films, I’d established my presence in this town.

Memories are short in this town, and memories are short for audiences. It’s a what-have-you-done-for-me-lately kinda situation. ‘Nominated for an Oscar? That’s amazing. What did you do this year?’ That part is the challenge. And we never know how something’s gonna do, really.

In ’96, you brought streetball legend Earl “The Goat” Manigault to life for HBO. Are there other sports stories you’d love to tell?

If I portray him, it’s gonna have to be a sports hero who’s torn his ACL. Has a jumper’s knee! Whatever great legend there is who doesn’t really like to walk up and down stairs anymore, I could do that kind of story. The sports aspect of it would need to be accompanying a human story … like Hoosiers — great sports movie. Great because there’s something about the hero’s journey.

It’s about what happens off the field.

And the sport supports what is happening with that person’s life. … It has to not be [that] sportscentric.

I saw the Twitter beef back in January about fantasy football — you versus Captain America. You finished last place. How does that happen?! You were the superhero of NFL ads!

Oh, you mean because I did a commercial I know how to pick fantasy football?!

Chris Evans was like, ‘Hey, you wanna be in a fantasy football league?’ I’m like, ‘Sure.’ He’s like, ‘You pick players, and you kind of make your teams up.’ I was like, ‘Yeah, I’ve heard about it … let’s do it.’ Here’s what I didn’t realize about fantasy football: every week, [Infinity War co-director] Joe Russo would come up to me and go, ‘Hey, have you set your lineup?’ And I was like, ‘Set my team? I already picked my team!’ He’s like, ‘Oh, no, every week the teams change and their stats change, and you gotta go see who’s on IR [injured reserve] and you gotta take them off, and you’re gonna need to get a good defense. …’ And I’m just wide-eyed.

Wait. This was your first time playing fantasy?

Yes! After about three weeks I was like, this is a job. And I have a job. I have a family. I have Twitter fights to have. I can’t be doing this all day.

How do you measure success? What’s the barometer for job well done for Don Cheadle?

I think that has to happen at the end. That’s almost a deathbed thing, you know? Or when you’re like, ‘I’m hanging it up.’ It’s when you’re finished and you look back and see if you checked the boxes you wanted to check, see if you left it all on the field. I’m still in it. For me, it just would be a way of thinking, ‘Did you not push yourself in a place you could have pushed yourself? Did you not take a chance, did you play this one safe?’ If I look back and see that, yeah, I ducked that one and I skipped that one — I haven’t done any of those things. So I feel like I’m being successful in my journey … but I got a lot of work to do.

A lot? I think some would disagree with you on that.

I think that’s proper. I’m supposed to be going ‘not yet’ on myself, so I don’t just sit on the couch and eat bonbons and just watch Netflix.

That said, what’s your next passion project?

I’ve written a movie, and I’ve sold the movie that I’ve written. It can’t go into production this year because of all the work that we have this year. But perhaps next year we’ll shoot it. It’s kicking my a– right now. I don’t pick easy ones.

Can you tell me what the film’s about or who the film is about?

What could I say? It’s a concept that I came up with. It’s a thriller/horror movie. Those are very hard to do well.

We saw some recent success, though, last year with Get Out, obviously.

That’s the thing: to be innovative, and be interesting, and use different subject matters, and still do the things that people want. You know, you still have to give people what they want, but you wanna do it in a way that’s interesting and maybe in a way that they haven’t seen it before … to pull the audience in or to keep them on the edge of their seat. That’s a high bar. It’s a challenge.

But that’s what drives you, yes?

Yeah. I’d love to have the courage to sell out a little bit and not have to have it always be so damn hard, you know? But I’d be bored if I did that.