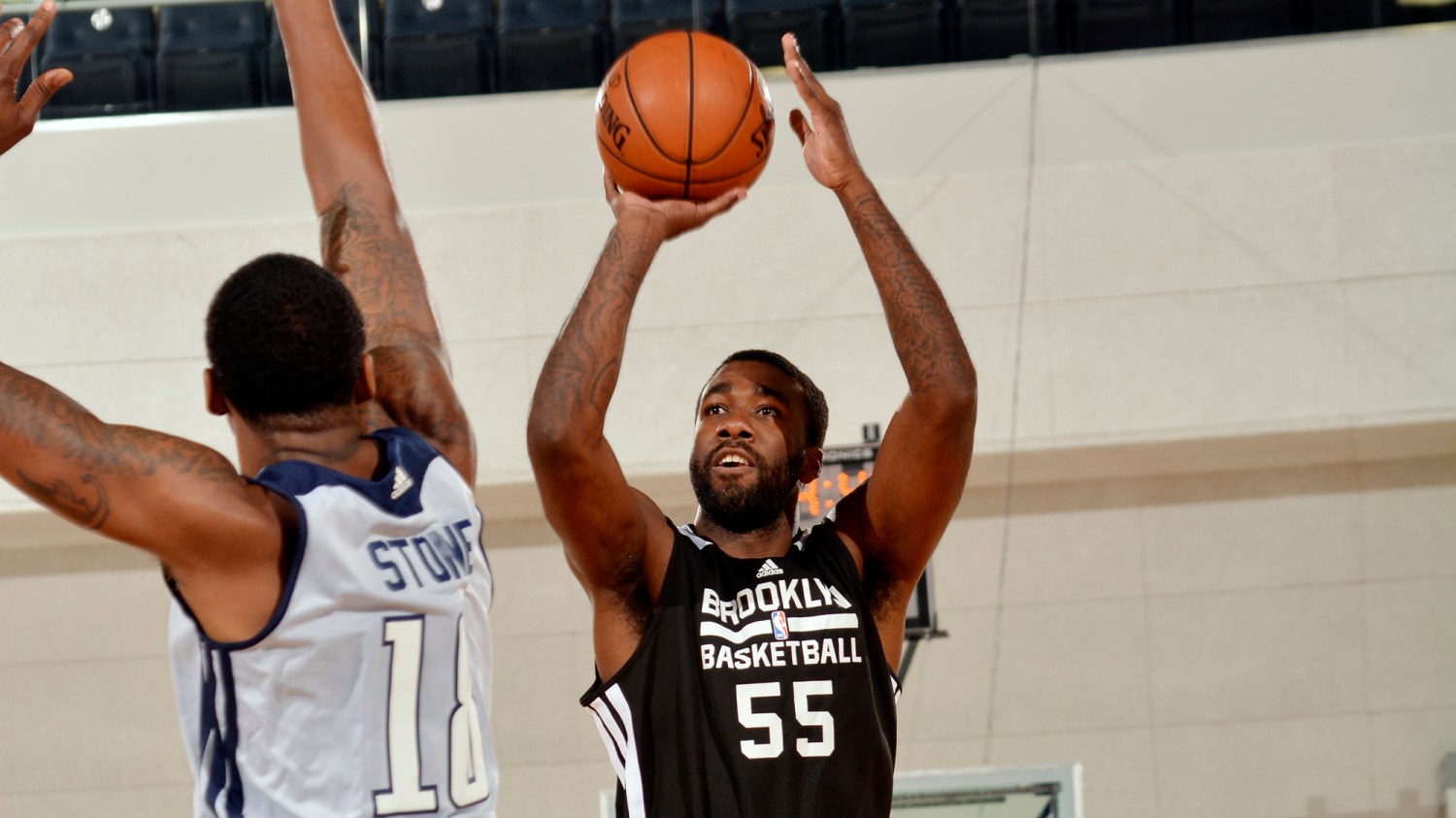 Donté Greene feels right at home in The Basketball Tournament

BALTIMORE — It’s a Syracuse meet-and-greet at a Baltimore Harbor East restaurant and Donté Greene is, like dozens of other supporters there, decked out in orange. Greene, who at 6-feet-10 towers over most of the other people in the room, is here reppin’ Boeheim’s Army, the collection of Syracuse alumni who have advanced to the final four of The Basketball Tournament, the $2 million winner-take-all event, which continues Tuesday with semifinals at Coppin State.

For Syracuse fans, Dinosaur Bar-B-Que is the perfect place to host the event. The chain that started as a mobile concession stand opened its first restaurant in Syracuse in 1988. Greene, in his one-and-done year at Syracuse, knows the food well.

But as the former NBA first-round pick is offered a plate that would allow him to dive into the tempting metal bins of pulled pork, chopped chicken, potato salad and macaroni and cheese, Greene takes a pass. Even the inviting aroma filling the air can’t sidetrack Greene.

Yes, Greene claims Baltimore as home even though he lived in a lot of places before he settled here. Born in Germany (where he spent the first four years of his life), he also spent part of his childhood in Japan, Guam, South Korea and Hawaii.

Being a well-seasoned traveler as a kid prepared Greene for his professional life. Since being selected with the 28th pick of the 2008 NBA draft and playing four years for the Sacramento Kings, Greene has played in numerous basketball outposts, including in Dubai, China, Puerto Rico and the Philippines.

In between those two international stints, where he probably collected more passports than Jay-Z, Greene was a local basketball star and a kid once thought in Baltimore to be the second coming of Carmelo Anthony.

“All of the things I’ve been through in life, all that I’ve accomplished, all that I’ve seen,” Greene said, “none of that would have happened had I gone along with thinking taking my life … is the best thing I can do.”

Greene was just 13 when the thought crossed his mind. He walked into the kitchen of his new home, pulled out a steak knife and took the blade to his left wrist.

“It was my seventh-grade year, and I was not really in a right place,” Greene remembered. “I tried to cut my wrist with a knife. It hurt, so I stopped.”

What leads a 13-year-old boy to such a dark place? The loss of his mother, April Greene, who died suddenly of heart disease in October 2001 at the family home in Hanover, Pennsylvania.

It was Greene who found his mother’s body. (“Her alarm wouldn’t stop going off, and I went into her bedroom to see what was going on.”) It was Greene who was suddenly forced to uproot and move to Baltimore to be raised by his grandparents and his dad, a man he barely knew after his parents got divorced. It was Greene who fell into such a deep depression that he couldn’t muster the energy to get out of bed, and would often go weeks without going outside.

“My mom was everything,” Greene said. “My best friend. My coach. My teacher. My role model. My big sister.

“When I lost my mom, I was lost for a good while. Not knowing who you are, not knowing what the future has in store for you, my mother made all the decisions, and she was gone. I wasn’t really close to my father, and I thought, ‘What’s going to happen? Who do I look to to be that leader?’ ”

Asked about the suicidal thoughts that followed, Greene takes a long pause.

“It just wasn’t right. Once you do it, you sit there and think, ‘What am I doing? How did I get to this point?’ When I hear about people committing suicide, I know where they’re at.”

Greene was nearly expelled from middle school for lashing out and failing to respect authority. Counseling and the support of family and friends helped Greene cope.

“Still, it was two years before I could talk about my mom without crying,” Greene said. “I’m glad I got past that stage.”

Greene, who played baseball and soccer as a kid, was introduced to basketball by his cousin.

“I started hanging with the wrong crowd, and my cousin just took me under his wing and said I needed to hang with him. Basketball was one of the things we did together.”

Greene was 6-1 when he entered Towson Catholic High School (the same school Anthony played at before going to prep school at Oak Hill Academy) as a ninth-grader.

At the start of his sophomore season, he was 6-feet-6.

“I was skinny, 170 pounds soaking wet,” Greene said, laughing. “I had no strength at all.”

Greene spent his summers playing for “Team Melo,” Anthony’s AAU squad that has groomed some of Baltimore’s top talent. He was neither physically nor mentally ready, which was evident during a drill in which he had to jump with a medicine ball and tap it against the backboard 10 times.

Instead of tearing the fragile player down, the coaches gave him the tough love that helped build Greene as a player. In his final season in high school, Greene, by then 6-feet-9, averaged 18.4 points and 6.8 rebounds to help Towson Catholic to a 32-6 record and titles in both the Maryland Interscholastic Athletic Association A Conference and the Baltimore Catholic League. The McDonald’s All-American was one of the nation’s top recruits.

Greene earned a scholarship to Syracuse, which briefly led to comparisons with another highly ranked Baltimore recruit who attended Towson Catholic.

“There were Melo comparisons and I understood why, but I didn’t pay attention to them,” Greene said. “I was just trying to make a name for myself.”

At Syracuse he started all 35 games he played in as a stretch four (forward), averaging 17.1 points and 7.2 rebounds as a freshman in 2007-08. He hit 90 3-pointers as a freshman, setting a freshman record that still stands at Syracuse.

But while Anthony won a national championship as a freshman at Syracuse, Greene’s team went 21-14 (9-9 in the Big East) and failed to reach the NCAA tournament. Greene had every intention of returning for his sophomore season but got feedback that he would be a first-round pick if he came out.

Greene was drafted with the 28th pick by Memphis and was traded on draft night to Houston. He dropped 40 points in his summer league debut but was traded the next month to Sacramento.

With the Kings, Greene had a hard time getting off the bench and asked to go to the NBA D-League (now the G League). After playing well there for a month, he was recalled by Sacramento for the rest of the season.

In his second season he started 50 games, averaging a career-high 8.5 points. But playing on a bad team in a small market with no television exposure left Greene feeling isolated.

“You only saw us if you had the league pass,” Greene said. “But we won 17 games my first year, so why would you watch?”

Adding DeMarcus Cousins (2010) and Isaiah Thomas (2011) didn’t help. Greene never suited up for an NBA team that won more than 25 games (in the last week of the 2012-13 season he signed with the Memphis Grizzlies team that reached the Western Conference finals, but he never played in a game).

Better pay led Greene to play overseas the past four years. He played in the Philippines last season.

“I played in Dubai, my team in China wasn’t far from Hong Kong, and in the Philippines we get treated like big stars,” Greene said. “But there are some rough places. We played a game in China where, when we flew in, it was dark, gloomy, and you could see all the pollution.

“When we got to the hotel, they brought out the food — an entire cooked goose, head and neck and all. My teammates started cutting it and eating it, and I’m sitting there thinking I’m going to throw up. That night I was dreaming of Pizza Hut but wound up only eating fried rice.”

Boeheim’s Army has given Greene a chance to get reacquainted with Syracuse.

“He made the right decision to go to the NBA, but he missed a lot of that college experience by being one-and-done,” said Kevin Belbey, the general manager of Boeheim’s Army. “I think he’s enjoying playing with former Syracuse players and wearing that orange again.”

It’s been a tough journey reaching the final four. Last week in Brooklyn, New York, it took the biggest comeback in the TBT’s four-year history to advance, as Boeheim’s Army had to overcome a 25-point deficit with 12 minutes to play.

“Maybe in any other game, a team packs it up being down by that much late in a game,” Belbey said. “But with $2 million on the line, no lead is ever safe. To have a chance to make that amount of money over the course of six games is a huge incentive.”

The team’s joining Boeheim’s Army in the final four are Scarlet & Gray (a team featuring Ohio State alumni that includes Greg Oden and Jared Sullinger), Team Challenge ALS (with Austin Daye, Casper Ware and Darren Collison, all teaming up to raise money for ALS awareness) and, along with Boeheim’s Army, the two-time defending champion Overseas Elite (an overseas collection of players that includes DeJuan Blair).

Team general managers and players negotiate final shares — 90 percent, or $1.8 million — before the tournament. The final 10 percent ($200,000) is divided among the top 100 fans of each team (which is determined by how many times a fan votes and how many people a fan recruits).

The turnout at Sunday’s event in Baltimore proved that Boeheim’s Army has a strong following. Greene has enjoyed the camaraderie, playing with fellow Baltimorean C.J. Fair as well as other well-known Orangemen such as Scoop Jardine, James Southerland (he scored 21 points in the second half of the come-from-behind regional final win), Brandon Triche and Eric Devendorf. Winning the entire tournament earns each player and general manager $150,000 (coach Ryan Blackwell would win $100,000).

Greene, who lives in the suburbs of Baltimore, is a father now, and during Sunday’s meet-and-greet he was happy to see his three sons (he also has a daughter) enjoying the excitement.

“My kids are my good luck charms,” Greene said. “Playing overseas, it’s tough for my family to see me play. Now they get to see their dad in big games, and games that are on national TV. So it’s been great.”

Greene is asked how his life has evolved from the troubling times he had as a teenager in the aftermath of his mother’s death.

“I have four beautiful kids, a great family, and have been exposed to a lot of the world,” Greene said. “I feel blessed.”