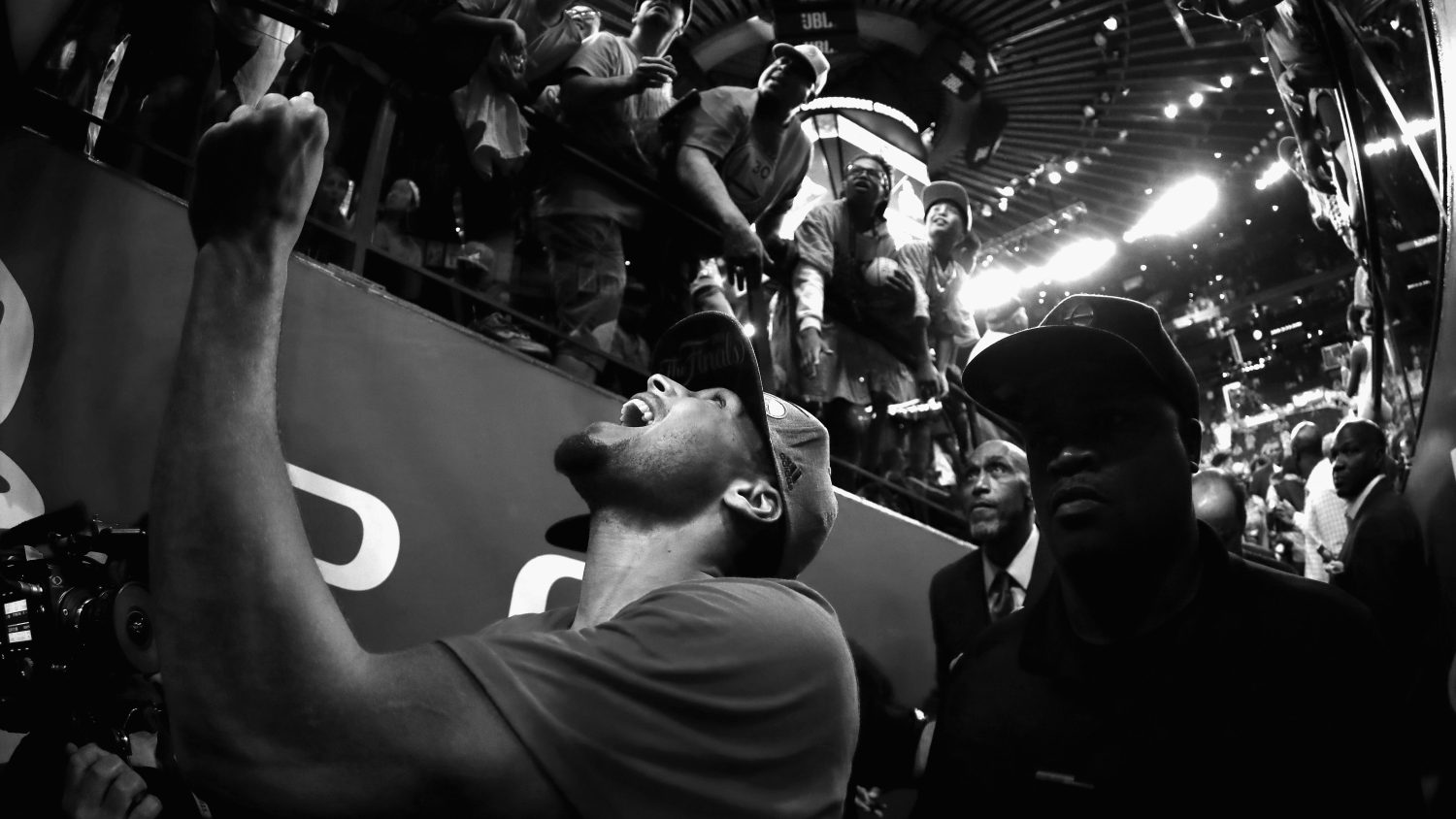 Stephen Curry #30 of the Golden State Warriors reacts as he leaves the court after they beat the Oklahoma City Thunder in Game Seven of the Western Conference Finals during the 2016 NBA Playoffs at ORACLE Arena on May 30, 2016 in Oakland, California. Ezra Shaw/Getty Images
2018 NBA Playoffs

Both conference finals are going to seven games. What’s on the line for each squad and why does it always boil down to LeBron?

But the allure of the game, keeps calling your name …

There’s a scene in 1992’s Juice that aces the test of time. Not the one where Bishop (played by the late Tupac Shakur) and Q (played by Omar Epps) are by their lockers in the iconic “I am crazy … but I don’t give a f—” scene. This one is earlier in the movie, when Bishop steps to Q about gaining the all-important juice. “You gotta snatch some collars and let them m—–f—–s know you gotta take them out any time you feel like it,” Bishop commands. “You gotta get the ground beneath your feet, partner. Get the wind behind your back and go out in a blaze if you got to.” Name a better description of the 2018 Eastern Conference and Western Conference finals. Better yet, name a better description for any Game 7.

In the second quarter of Saturday’s Rockets vs. Warriors Game 6, Drake, one day out from his release of the laser-guided missile “Duppy Freestyle,” at the rapper Pusha T, released a new single called “I’m Upset.” That same night, Draymond Green sported the black satin Scorpion jacket Drake unveiled on Instagram last month. Coincidence? Probably not. Scorpion is the name of Drake’s forthcoming album, set for release next month.

The Warriors are Deebo from Friday. In particular, Deebo before he caught the brick to the face.

In any case, the title reflected the Warriors’ mood. Backs against the wall, the defending champions responded with a classic Bay Area onslaught. They used a 29-22 second quarter to fuel a run that eventually led to a 115-86 victory and forced a Game 7 in Houston on Monday night. The NBA, the most dramatic league in American sports right now, will play two Game 7s in 24 hours. It’s the first time it’s happened since 1979, when the Washington Bullets defeated the San Antonio Spurs and the Seattle SuperSonics got edged by the Phoenix Suns.

Win, lose, blowout or close game, the fascination around Game 7s remains steadfast. There’s the ultimate sense of finality. The poetic desperation that rides with every bucket. Agony and jubilation with each turnover. Role players become legends. Superstars become demigods or demons. No one leaves Game 7 the same person they were before the tip. Not the fans, not the coaching staff and certainly not the players. There’s always a certain amount of basketball soul left on the court.

And these two Game 7s? The greatest player in the game is on the road. The greatest team, too. The league’s best team recordwise is hellbent on reversing a conference curse. And the last team to beat LeBron James in the playoffs wants to put another trophy behind. Every team in the conference finals has got some serious soul on the court this year.

Under head coach Brad Stevens, dubbed heir apparent to the coaching thrones occupied by Steve Kerr and Gregg Popovich, this is Boston’s best opportunity to advance to the Finals since the days of Kevin Garnett, Ray Allen, Paul Pierce and Rajon Rondo. It’s also the chance to accomplish something that hasn’t been done by an Eastern Conference team since those Garnett-era Celtics defeated LeBron James and the Cleveland Cavaliers 2,937 days ago.

Recent history also works in Boston’s favor. No home team has lost in this series, and the Celtics are at home. Of the four teams left, Boston’s playing with the most house money. If the Celtics lose, the result will be heartbreaking — but only in the moment. Boston’s peak has yet to be reached. They’re a team full of high-quality role players, uber-talented rookies, a world champion point guard, a swingman whose been sidelined all season and a team poised to dominate the East whenever LeBron sees fit to fall back. Whenever that may be.

Will the Rockets regret not sealing the deal in Game 6, when they controlled the game for a half? Will Chris Paul be available for Game 7? The answers are “we’re about to find out,” and “they better hope so.” Think back to a few years ago, when the Pittsburgh Steelers and Baltimore Ravens were the perennial matchup in sports. The Seattle Seahawks and Colin Kaepernick-era San Francisco 49ers are another example. Both were heavyweight prize fights for bragging rights, and the winning teams were roadblocks to the other’s immortality. Warriors vs. Rockets doesn’t present near the physicality the other two rivalries headlined, but what it lacks in violence it doubles in poetic desperation.

Game 4 was the moment that kept them alive. Game 7 is the moment that could make this Houston team legendary. Golden State, by most metrics, is Mike Tyson on the iconic ‘90s video game Mike Tyson’s Punch Out!! The final boss that’s so good, so unrelenting that even if a team is lucky enough to steal a round, the final result remains the same. The Rockets stand on unprecedented territory. They’ve stolen three rounds (games) in their clash with Golden State. They’ve got this iteration of the Kevin Durant-era Warriors on the ropes to the point where they actually appear vulnerable.

Of the four teams left, Boston’s playing with the most house money.

But the truth is, Houston should’ve closed out the series Saturday night — never give a fighter a chance to throw one last haymaker. But Monday night the Rockets have the Warriors in their house. James Harden, Chris Paul (maybe?) and company have the chance to slay a Goliath that’s held a sleeper hold on basketball for nearly the past two years. If Golden State wins, though? We’re also going to be presented with one of the all-time great What If’s in sports history.

What if Chris Paul never gets hurt? It’s a conundrum that could very well rewrite basketball narratives moving forward. Paul was a leading figure in Houston’s transformative victories in Games 4 and 5. His absence showed in Game 6, as Houston committed turnover after turnover. Hamstring injuries are difficult to predict, so it’s almost impossible to forecast CP3’s availability for a game that will decide Houston’s place in basketball history. Do the Rockets become just another doormat, in the vein of the Indiana Pacers to the LeBron-led Miami Heat, the Sacramento Kings to the Shaquille O’Neal and Kobe Bryant-led Los Angeles Lakers or the New York Knicks to the Michael Jordan-led Chicago Bulls? Or are they the key that cracks basketball’s most difficult code?

The Warriors are Deebo from Friday. In particular, Deebo before he caught the brick to the face. Golden State, in the Kevin Durant era, has yet to catch a brick to the face. The Warriors have dominated basketball since the 2014-15 season with a gluttonous display of ball sharing, offensive onslaughts and free-agent acquisitions that have crippled an entire league.

The fact remains, though, the Warriors are on the brink of having that invincibility shattered. It’s Golden State’s third Game 7 in this era. The first two? A victory over the Oklahoma City Thunder, led then by Durant and Russell Westbrook. And a dramatic Game 7 loss to the Cleveland Cavaliers in the 2016 NBA Finals. Both of the games were in Oakland. The level of difficulty increases tenfold on the road. The rims are a little stiffer. The lights a lot brighter. The crowd is bloodthirsty.

Will H-Town regret not sealing the deal in Game 6? Will Chris Paul be available for Game 7? The answers are “we’re about to find out” and “they better hope so.”

If any team left is built for a moment like this, it’s the Warriors — who have proven time and again that no challenge is too great. Part of what makes great teams great is the ability to walk into any arena feeling up 15 on an opponent. That’s who the Warriors are. Their place in basketball history is already solidified. But how does one of the all-time dominant teams in any major American sport keep that same energy? How do they react when it’s, damn near literally, them against the world? What intangibles does Draymond Green bring? Can Klay Thompson remix his virtuoso Game 6 performance? Will Stephen Curry unleash some hell and toss the Warriors on his back? And will Kevin Durant snap out of three consecutive poor shooting games and again prove himself to be one of the two best players in the world? We’ll learn shortly whether Deebo catches that brick.

No one in basketball — no one in sports, really — does drama quite like LeBron James. His 15th season is already documented as his finest. He’s a physical and statistical anomaly if one ever existed. What James has done this postseason — the game-winners, the 40-point games, the Toronto baptism and overall sheer dominance — is nothing short of spectacular. But does even James, the poster child for fitness and longevity in the NBA, have the energy left to lead this Cavaliers squad back to the Finals for a fourth straight year (and ‘Bron’s eighth straight)?

On the surface, this moment seems too daunting for even LeBron. Kevin Love is out for Game 7 (concussion protocol). Tonight has all the makings of Michael Jordan and the Chicago Bulls in Game 7 versus the Detroit Pistons in the 1990 Eastern Conference finals. A game in which Jordan stood no chance, given the fact that Scottie Pippen was derailed by migraines. But, like Jordan, if any player has proved capable of making the impossible seem routine, it’s James.

Houston’s got the Kevin Durant-era Warriors on the ropes to the point where they actually appear vulnerable.

And now the NBA’s premier megastar is in a must-win on the road. King James has to play for his team’s life when Cleveland’s second-best player just might be 37-year-old Kyle Korver. Boston is the better squad. Cleveland just happens to have the best player on the court. A man whose legacy in Game 7s is already cemented with career averages in the most pressure-packed game in sports: 35 points, 8 rebounds and 5 assists in seven games.

Win, he advances to the Finals, where a Western Conference juggernaut awaits. Lose, and the third (and presumed final) chapter of his career begins. Somehow, though, it feels like tonight’s Sisyphean task was LeBron’s only option. He’s played 11 historic, and at times contentious, seasons in Cleveland. Only two options seem realistic for James, who is so routinely dominant that it’s fooled many into believing his talent is as common to life on Earth as morning traffic. One, his Thanos-like run continues behind another iconic performance inside the arena he’s seen both heaven and hell in. Or, two, he goes out —metaphorically of course — like Cleo at the end of Set It Off. A blaze of glory. LeBron, and all of us, really, wouldn’t have it any other way.