Tuesday marked the start of ESPN’s 2017 V Week. During the fundraiser for cancer research, The Undefeated will tell stories about early detection, clinical trials and research in minority communities. ESPN hopes to raise funds and awareness about the important cause championed by our friend, coach Jim Valvano. One hundred percent of all cash donations go directly to cancer research. Donate here today.

No one in Edward Kim’s family was in the medical field. His father was a finance professor and his mother was an artist, but he knew he always wanted to be a doctor. After finishing a seven-year medical program at Northwestern University, he thought he wanted to become a cardiologist, or maybe a surgeon. But he ended up in internal medicine.

“Internal medicine is one of those fields where you go there because you need to buy more time,” Kim said. “I knew I liked medicine, and I thought I would be in a teaching institution down the road. That’s what I really liked. My father was a teacher, and I really enjoy that education part.”

He started his residency in Houston at Baylor College of Medicine. In the fourth month, he was in an oncology rotation.

“After that month, it changed everything inside of me,” Kim said. “I really appreciated the patients and how their perspective was fighting this type of disease. Cancer is still one of the diagnoses that resonates very differently than most other diagnoses. It just brings a whole different connotation to it than just spending an extra couple minutes with a patient with cancer. They get it. That’s what really turned inside of me.”

Now Kim is chairman of Solid Tumor Oncology and Investigational Therapeutics at Levine Cancer Institute in Charlotte, North Carolina. And he has received grant money from the V Foundation’s Stuart Scott Memorial Cancer Research Fund, which allocates dollars to minority researchers to fight cancer in minority communities. The fund helps to continue Scott’s fight against cancer and assist some of the most vulnerable and disproportionately affected communities battling the disease.

Kim’s research under the grant involves collecting information to try to develop a blood-based test that will help determine which patients being treated with an immunotherapy drug will receive the best benefit.

“That will hopefully help us refine treatment for those patients, not overtreat patients, or perhaps treat them adequately so they don’t need to continue treatment if their blood marker status looks good,” Kim said. “It’s still in the very early stages. We have a scientist here who has developed a blood marker, and that’s what we’re going to try. I think the scientific community sees the need of trying to identify those patients at highest risk, or who may benefit the most, or those who may not benefit so much.”

The V Foundation has awarded more than $7 million from the Stuart Scott Memorial Cancer Research Fund. The groundbreaking minority cancer research initiative funds outstanding minority researchers and research that explores the biology behind why some cancers are more likely to occur, are more aggressive or are harder to treat in some minority populations. Nineteen grants have been awarded since the fund was started in 2015.

Before joining the Levine Cancer Institute, Kim landed a fellowship across the street from Baylor at the MD Anderson Cancer Center, where he gravitated toward lung cancer and head/neck cancer patients. This opportunity led to his current research.

“Tobacco-related cancers, and how to prevent them, was a lot of my research there,” Kim said. “They asked me to stay on staff and faculty there. I stayed there, and I was there for 12 years, tenured and doing very well.”

Five years ago, he took the position at Levine because he was captivated by its vision to deliver regionally based health care. He began as a cancer care expert treating patients with lung cancer.

“Over the years, I’ve done a lot of research with treatments, prevention, cancer markers in lung cancer,” he said. “It’s naturally evolved to what we’re doing here in Charlotte, and really in the Carolinas, because we are so regionally spread that we had an opportunity to compete for V Foundation grants.”

Kim was part of a V Foundation grant in Houston.

“You have to have a strong team, a strong bench, to succeed or even really battle,” Kim said. “That’s what we’ve put together here.”

Kim said the unique aspect of their patient population in the Carolinas is that they’re on the front lines.

“Part of the attraction of leaving a great center like MD Anderson is that the patients you see there are all usually very well-educated, they have the means to travel or the savvy to travel to a top-notch cancer center, whether that be New York, Boston, Houston,” he said. “But the majority of patients treated out there, 85 percent of them, are seen in the community. That is what our system is structured around. We see patients who don’t know about clinical trials, who don’t know about the cutting-edge therapies. This is an opportunity to try and test, not only have them participate in this type of study, but also keep them informed of these types of things that are going on.”

It has been well-documented, especially in recent research, that minorities respond differently to medical and pharmaceutical treatment. So it’s important to Kim that he has a diverse population of patients.

“We know that there are characteristics that are different in each individual patient,” Kim said. “I’m Asian. We know that some drugs work better in patients who are Asian than others. We know that this is different among Hispanics, Caucasians and African-Americans. That is one of our primary objectives, to make sure we have cohorts of different ethnic subgroups to look at those differences. There’s also a big cultural aspect. Each culture is very different. I’m not even talking about whether you grew up in the North, or the South, or the East, or the West, or Indiana versus Tennessee. The cultural aspect of perception of clinical trials, experimental therapy, has a very checkered history among different groups.”

Near the end of his life, Scott participated in a clinical trial study. Socially disadvantaged and racial/ethnic minority groups have been historically underrepresented in clinical research. Lack of African-American participation in clinical trials stems from distrust historically, most notably with the Tuskegee Syphilis Study (1932-72). Earlier this year, the story of Henrietta Lacks and her stolen cells was made into a movie. The convoluted history of medical experimentation on African-Americans in the United States, along with many other structural factors, plays a huge part in the lack of participation by the black community.

“Part of what we are trying to overcome is that participation in these trials really doesn’t do any harm because we’re not giving experimental drugs or anything,” Kim said. “We’re collecting extra blood, blood that normally would be tested for standard lab values, to try and learn from them, learn from their experience, and hopefully can benefit someone down the road. That’s how research is. It really is an altruism where you’re trying to get some benefits now, but you’re hopefully benefiting those down the road.”

Like Scott, Kim has a vision that includes increasing early detection and participation from minority groups in clinical trials.

“I think it’s still something that health care professionals, different support groups and education need to occur so that folks can understand what the opportunities are, and what’s the benefit for them,” he said. “I’m not saying that everybody should be on clinical trials, and every clinical trial can be a little different, but it is a way where we make progress. We can’t get a new drug unless we have a clinical trial. That’s what leads us to the next study, and the next study. I’m a strong advocate for people to be on clinical trials. I feel like we need more clinical trials out there. You find the right biomarker and identify the patient that’s going to benefit, that drug works really well.”

For early detection, Kim is an advocate for identifying at-risk populations to try to intervene and prevent cancers.

“It’s great that there is a CT screening exam now for people who are heavy smokers, that are at high risk for developing lung cancer,” Kim explained. “That study finally was positive, and now Medicare reimburses.”

Besides his study with the V Foundation grant, Kim and his team have built a mobile lung cancer screening unit that’s called the lung bus, a project at the Levine Cancer Institute spearheaded by his boss.

“Just like you see these mammograms on these buses driving around and stuff? Well, we did it with a CT screener. Since April this past year, we go to underserved communities in North Carolina and offer free CT screening to them. These are people who would not have sought out this treatment.” 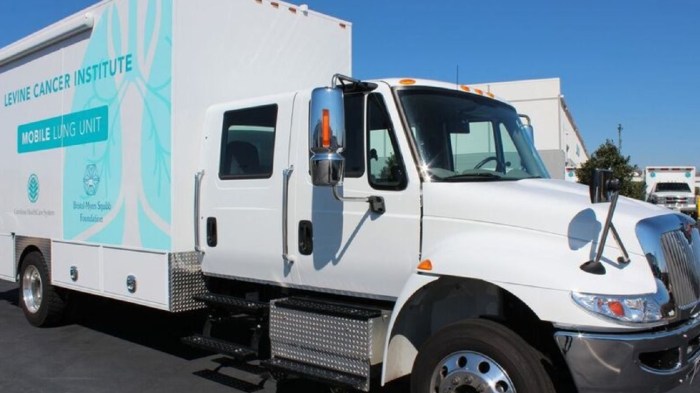