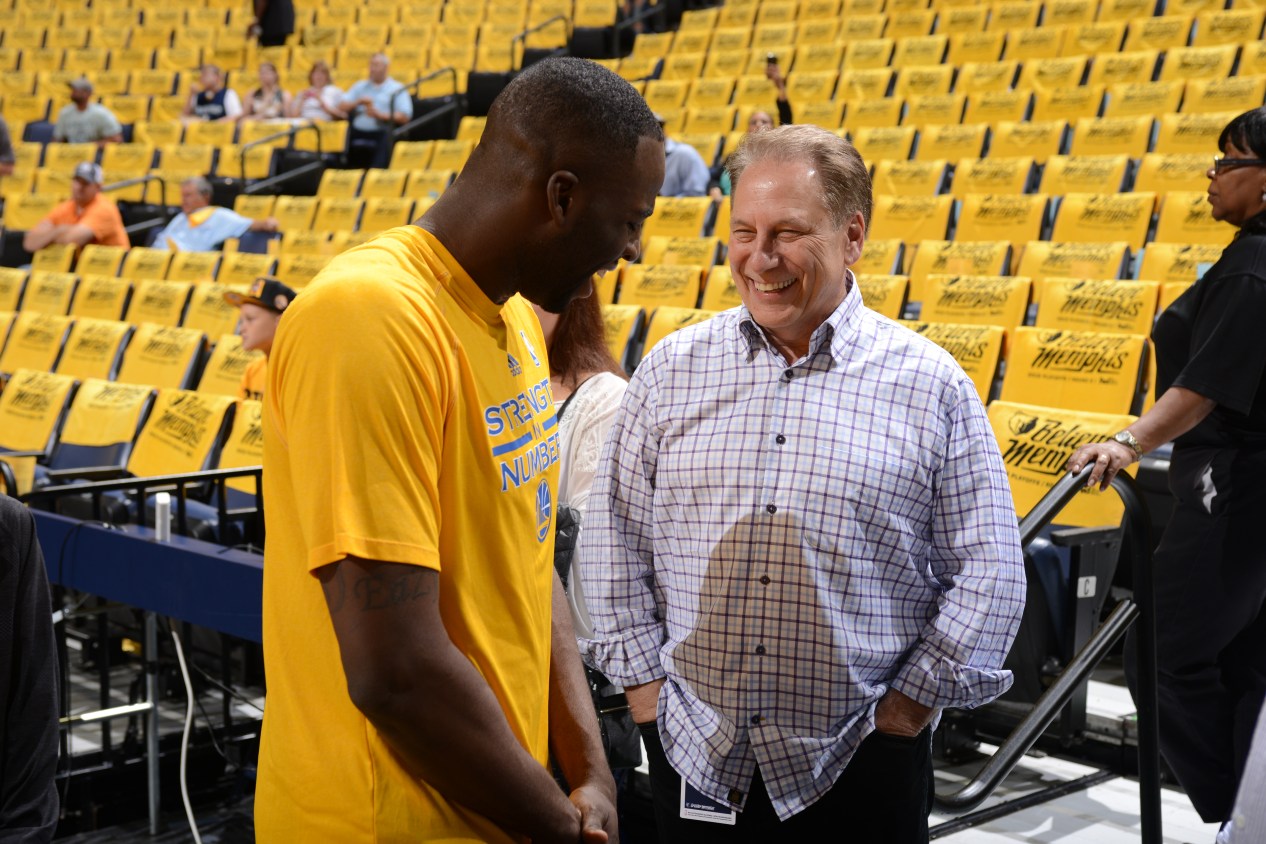 Two-straight NBA Finals appearances. An Olympic gold medal in Rio de Janeiro. There is only a little over a month remaining before the highly touted and scrutinized Golden State Warriors begin training camp, too.

Even so, a very long trip to the Springfield, Massachusetts, was a must for him. It’s not every day that you can witness your old college coach and close friend get enshrined into the Naismith Memorial Basketball Hall of Fame, which will be the case for Michigan State men’s basketball coach Tom Izzo on Friday.

“Just to be there for him at the stage, a big moment,” Green told The Undefeated. “I can’t remember a big moment in my life that he hasn’t been a part of. When there is a tough time in my life, he is there for me. For me to sacrifice a few hours for one of the biggest moments of his life is a no-brainer for me.

“That’s a guy I know would do anything for me. To see him get inducted into the Hall of Fame, I wouldn’t miss that for anything.”

Green and Izzo’s relationship dates to 2008 and is surprisingly still quite strong despite the NBA veteran’s departure four years ago.

Green actually originally committed to the University of Kentucky while starring at Saginaw High in Michigan. That decision changed after coach Tubby Smith left Kentucky with four years left on his contract to coach Minnesota. Green didn’t think Michigan State recruited him hard previously, but once he opened his recruiting back up, Izzo was his first and truly last meaningful recruiting call.

It was Izzo’s honesty that ultimately persuaded Green to stay close to home by signing with the Spartans.

“And I respected that. You don’t know if someone is going to come in and outwork someone. You don’t know what shape I am going to be in. So I felt like that was real as he could keep it with me. I’m like, ‘This is the best place for me.’ ”

Green had NBA dreams since childhood, but admitted he had “no clue how to get there” entering Michigan State. Izzo pushed him to help make his dreams a reality.

Green helped the Spartans advance to two Final Four appearances and win a 2012 Big Ten Tournament championship. He was the 2012 NABC College Basketball Player of the Year and a consensus All-American. The Warriors drafted Green with the 35th overall pick in the second round of the 2012 NBA draft. He said Izzo “showed me the way” to get to the NBA and “made it believable.”

“As a freshman, I didn’t know how to work,” Green said. “I didn’t know what hard work was, what it took to become what I’ve become or who I was at Michigan State. He was so hard on me as a freshman to try to show me what it took that I didn’t understand it. It’s hard for you to sit there and listen to someone say they care about you so much but yet they’re yelling at you every day.

“Nothing is good enough until you actually mature and realize, all right, the problem is he wants me to be successful more than I think and want to be successful … Once I realized that, how could you not love a guy who wants your [success] more than you?”

Izzo called Green one of the “ultimate winners” he ever coached. Green described going to Michigan State as “the best decision of his life” and donated $3.1 million to his old school last year.

“Draymond put our program, our school, me and everyone else in front of him. I always knew winning was the most important thing to him,” Izzo said.

Although Green has an instrumental stepfather whom he calls his dad in Raymond Green, the 2016 NBA All-Star views Izzo as a secondary father figure. Case in point: Izzo attended about six of Green’s games last season. That included Game 6 of the 2016 NBA Finals in Cleveland to support Green after he returned from a one-game suspension.

“We do have a father-son type of a relationship,” Green said about Izzo. “We have a friendship. We still have a coach-player relationship. That’s what makes it so special because he is all of those things …

“Just because your dad is in your life doesn’t mean you can’t have another father figure or two. It’s so unique.”

While the racial difference is obvious, Green added that they see each other simply as human.

“There is never a thought about that. It’s just love,” Green said. “It is just one of those things where you can’t put a race on it. It’s not really about race, because the type of love we share is genuine, straight from the heart.”

Green has gone on to become an NBA champion, NBA All-Star and one of the league’s most loved or hated players. He went from making the rookie minimum, being paid less than $1 million in each of his first three seasons, to landing a five-year, $85 million contract as a free agent last year. He has had a tough stretch since June, however, with his Finals suspension, criticism of being too physical on the floor and apologizing for accidentally putting a lewd picture on social media while preparing for the Olympics.

Through it all, Green said, Izzo has “always been there.”

“I highly doubt that if someone went through something like I did this summer, that they would talk to their college coach more than they talk to anybody else. That’s not normal. And you’re not calling him, he’s calling you. He is one of the realest and loyal people I’ve ever encountered.”

Izzo says the Warriors forward is still learning to adapt to his stardom and a much grander paycheck. He expects Green to “tweak a couple of things” and still be a leader with the Warriors next season.

“I talked to him a lot after all the things that happened,” Izzo said. “I told him that all of us have to learn how to adjust to the fame and realize that even if we are not doing anything as wrong as it seems on some of it, you’re being portrayed different. You go from $900,000 per year to $85 million. I’m not sure I’d handle it too good.

Izzo’s coaching resume includes 524 victories, 12 conference titles, seven Final Four appearances and a 2000 NCAA title. He said that he told his wife, Lupe, that he is going to make sure he truly enjoys the Hall of Fame weekend. Green says that Izzo will “probably cry” during his Hall of Fame speech, but is not sure what to expect.

“He’s so passionate about what he does that it’s hard to gauge what his reaction will be,” said Green, who is scheduled to arrive in Springfield on Friday.

What could be gauged was Izzo’s reaction to a busy Green coming to Springfield.

“I didn’t ask him to come to this because I thought he had too much of a summer as far as the travel,” Izzo said. “I want him to get home. He just called me and told me that he wants to come. I said, ‘I’d love to have you.’ ”