In late September, at the 6:35 mark of the second quarter during a Week 4 matchup between the Washington Redskins and New York Giants, Dwayne Haskins Jr.’s long-awaited NFL debut finally arrived.

With Washington trailing 14-0, the 22-year-old rookie had his number called to replace veteran starter Case Keenum. And while the first regular-season game of Haskins’ pro career might’ve been forgettable — he completed just 9 of 17 passes for 107 yards, with no touchdowns and three interceptions, as the Redskins fell to 0-4 on the season — what he wore on his feet that Sunday were far from it. Haskins trotted onto the turf at MetLife Stadium in a fresh pair of burgundy, white and gold patent leather Air Jordan 1 player exclusive (PE) cleats.

It was an on-field moment of style months in the making. Back in April, before the Redskins selected him out of Ohio State University with the 15th overall pick in the NFL draft, Haskins became the only player in the league’s 2019 rookie class to sign an endorsement deal with the Jordan Brand.

“This is an extreme opportunity,” Haskins told The Undefeated in June, “… a blessing for me to have a chance to be a part of something so historic. It’s something that I really take pride in. I’m really thankful.”

Four weeks after facing the Giants, Haskins started the second half of Washington’s Thursday night road game against the Minnesota Vikings for an injured Keenum. This time, he donned another pair of PE cleats — burgundy low-top Air Jordan 1s, with a white toe box, swoosh and heel, and a gold sole. After the 19-9 loss, the Redskins fell to 1-7 on the season, with Haskins throwing for just 33 yards and one interception.

Washington has simply struggled this year, while its top draft pick has experienced growing pains. Yet Haskins, who will make his first NFL start this Sunday, has undeniable potential that not only the Redskins are invested in.

“Dwayne’s work ethic, mindset and character are a reflection of what Jordan Brand stands for,” said Jordan Brand president Craig Williams. “As a quarterback, you need to be more than just an exceptional athlete, you have to be a leader too. We know Dwayne is built for that.”

Haskins is far from the first quarterback to represent the brand in the NFL. But he’s next up in an exclusive fraternity of talented signal-callers, mostly African Americans, who have laced up Air Jordans on the gridiron.

In the fall of 1997 — before Michael Jordan’s final NBA championship-winning season with the Chicago Bulls, and just four months after Haskins was born — Nike announced the launch of the Jordan Brand as a subdivision of the global sportswear company.

In 1999, following Jordan’s second retirement from the game of basketball, Nike and its highest-profile athlete began taking steps toward expanding his footwear and apparel business outside of hoops. The Jordan Brand made its foray into football in a big way by signing Minnesota Vikings wide receiver Randy Moss, who was named Offensive Rookie of the Year and first-team All-Pro after his first season in the league.

“From a football standpoint, I was the first athlete to rep Team Jordan,” Moss, a 2018 Pro Football Hall of Fame inductee, told The Undefeated. “Then it trickled on down.”

Donovan McNabb, a Chicago native who grew up idolizing Jordan before emerging as a two-sport college athlete in basketball and football at Syracuse, started his NFL career with the Philadelphia Eagles in 1999 endorsing Nike. Yet by 2001, McNabb joined Moss in rocking Jumpman on the field as the first quarterback in NFL history to ink an endorsement deal with the Jordan Brand.

“To be asked to come over to the Brand Jordan, I was very excited,” McNabb said. “It was truly an honor being the only quarterback to be wearing Brand Jordan shoes back then.”

For two seasons, McNabb rocked cleated and turf field versions of Air Jordan 9 and Air Jordan 11 PEs, custom-designed in Philadelphia Eagles colors, green and white, while featuring the quarterback’s initials and No. 5 on the heels of each shoe. McNabb appeared in Sports Illustrated in his own edition of Moss’ signature shoe, the Jordan Super Freak. And in a 35-17 win against the Houston Texans on Sept. 29, 2002, he debuted his unofficial signature model, called the Jordan Trifecta.

“I was wearing brand-new shoes every game,” said McNabb, whose old game-worn cleats have been hunted down by sneaker collectors and surfaced for sale online. (Urban Necessities, a Las Vegas-based sneaker consignment store, currently lists a pair of McNabb’s size 13 Air Jordan 9 PE cleats for $4,000.) “People were like, ‘Damn, McNabb, I know you’re not gonna wear all of those.’ Guys told me, ‘I don’t care, I’ll wear them with your name on the back. These are dope.’ … It ain’t nothing like wearing some Jordans on the field, because you know them things stand strong.”

During that era of football, Michael Vick — who signed with Nike when he entered the NFL in 2001 after becoming the first African American quarterback to be drafted No. 1 overall — also began wearing Air Jordans on turf fields throughout his first season as a starter for the Atlanta Falcons in 2002.

“Back then, it wasn’t about what I had on my feet — it was about trying to look good. Playing on AstroTurf and playing in the Georgia Dome, we kind of looked at it different,” Vick said. “Jordans didn’t make me faster. They didn’t make me quicker. It was more so about style points. … I thought it was cool to play on turf and be able to wear basketball shoes. We switched it up from time to time, and Jordans was what I decided to put on.”

The pair of Air Jordan 17s that Vick wore during his record-setting performance in the Falcons’ 30-24 overtime win against the Minnesota Vikings on Dec. 1, 2002 — which he ended with a jaw-dropping, game-winning 46-yard rushing touchdown — were sent to the Pro Football Hall of Fame. Soon, an official partnership between Vick and Jordan became a possibility.

“I had conversations about signing with Brand Jordan in 2003,” Vick said. “But Nike gave me one of the biggest contracts ever signed by a football player. I think what Nike did superseded what Jordan could’ve done at the time. Back then, Jordan was just coming up in football. But how Brand Jordan has evolved, I can’t say I would’ve made the same decision in this day and age.”

Minnesota Vikings Pro Bowl quarterback Daunte Culpepper, a teammate of Moss’, spent one season endorsing the Jordan Brand in 2005, during which he wore purple and white Air Jordan 14 PE cleats. In 2006, Culpepper was traded to the Miami Dolphins and made the jump to Reebok, where he joined McNabb, who left Jordan in 2003. That same year, Vick received his own signature line of cleats and trainer shoes, dubbed the Nike Zoom Vick 1. By the mid-2000s, the Jordan Brand didn’t have a single quarterback on its roster of NFL athletes.

Almost a decade passed before the brand signed its next one: DeShone Kizer from the University of Notre Dame, a second-round pick by the Cleveland Browns in the 2017 NFL draft. And in 2018 — the first season that the Jumpman logo could officially appear in the NFL, as branding was previously omitted from on-field footwear — the Jordan Brand added San Francisco 49ers quarterback Jimmy Garoppolo.

“Since I got in the league, it was one of my dreams to be with Jordan,” Garoppolo told ESPN, “and it came true.”

In April, before this year’s NFL draft, Nike announced its list of rookie signees, and only one player had Jordan Brand next to his name in the press release: Haskins, who was the third quarterback selected behind Kyler Murray, the No. 1 overall pick of the Arizona Cardinals, and Daniel Jones, the No. 6 overall pick of the New York Giants, both of whom are Nike athletes.

“Dwayne brings youth and he brings charisma, especially with the way the game has changed,” McNabb said. “Here’s a young brother who a lot of people had faith in. He’s worked extremely hard. He put great numbers up at Ohio State. And if you’re a brand … why not go with a quarterback? … It presents an opening from a marketing standpoint that I think is smart.”

Haskins wore Nike in games at Ohio State, where he broke several school and Big Ten conference records after throwing for 4,831 yards with 50 touchdowns and just eight interceptions during his lone season as a starter. But he says he often practiced in Air Jordan 11s. The 6-foot-4, 230-pound gunslinger also shares the same agent as former Ohio State teammate Malik Hooker, a safety for the Indianapolis Colts who signed with the Jordan Brand as a rookie in 2017.

“Going through the process of picking a brand, I just felt like Jordan was the brand I liked the most as far as on the field and off the field,” Haskins told The Undefeated during Redskins training camp in August. “I feel like they had the best cleats as far as how they look and being custom. … They fit to my feet. They look pretty good. So it was an easy choice.”

Redskins veteran tight end Jordan Reed, who joined Jordan Brand in 2016, wasn’t surprised by the Haskins signing given the swag the rookie possesses, from the diamond-studded earrings to his gold No. 7 chain, and undeniable arm talent.

“There’s a certain type of guy that’s with Jumpman, a certain type of player,” Reed said during training camp. (In October, Washington placed Reed on injured reserve as a result of a concussion he suffered in the preseason.)

Coincidentally, Reed and Haskins wear the same size cleat, 12.5. So during minicamp, before the rookie got his first pairs of Air Jordans for the field, Reed shared his. Now, Haskins has his own Jordan cleats — and a lot of them. From training camp, to preseason and now the regular season, Haskins has broken out 10 different pairs, mostly 1s, in all-white, “Bred” and “Chicago” colorways.

“The deal shows what Jumpman thinks about Dwayne and his potential as a player,” Reed said. “I think he can be a superstar. I think he has a lot of potential as an NFL quarterback.”

It started with McNabb, then came Vick, Culpepper, Kizer (now with the Oakland Raiders) and Garoppolo. (New Orleans Saints and Tampa Bay Buccaneers quarterbacks Teddy Bridgewater and Jameis Winston have worn Jordan 11 cleats throughout the season, though they’re not officially signed to the Jordan Brand.) Now, it’s Haskins’ moment, as the only rookie and latest quarterback to rep the Jumpman. 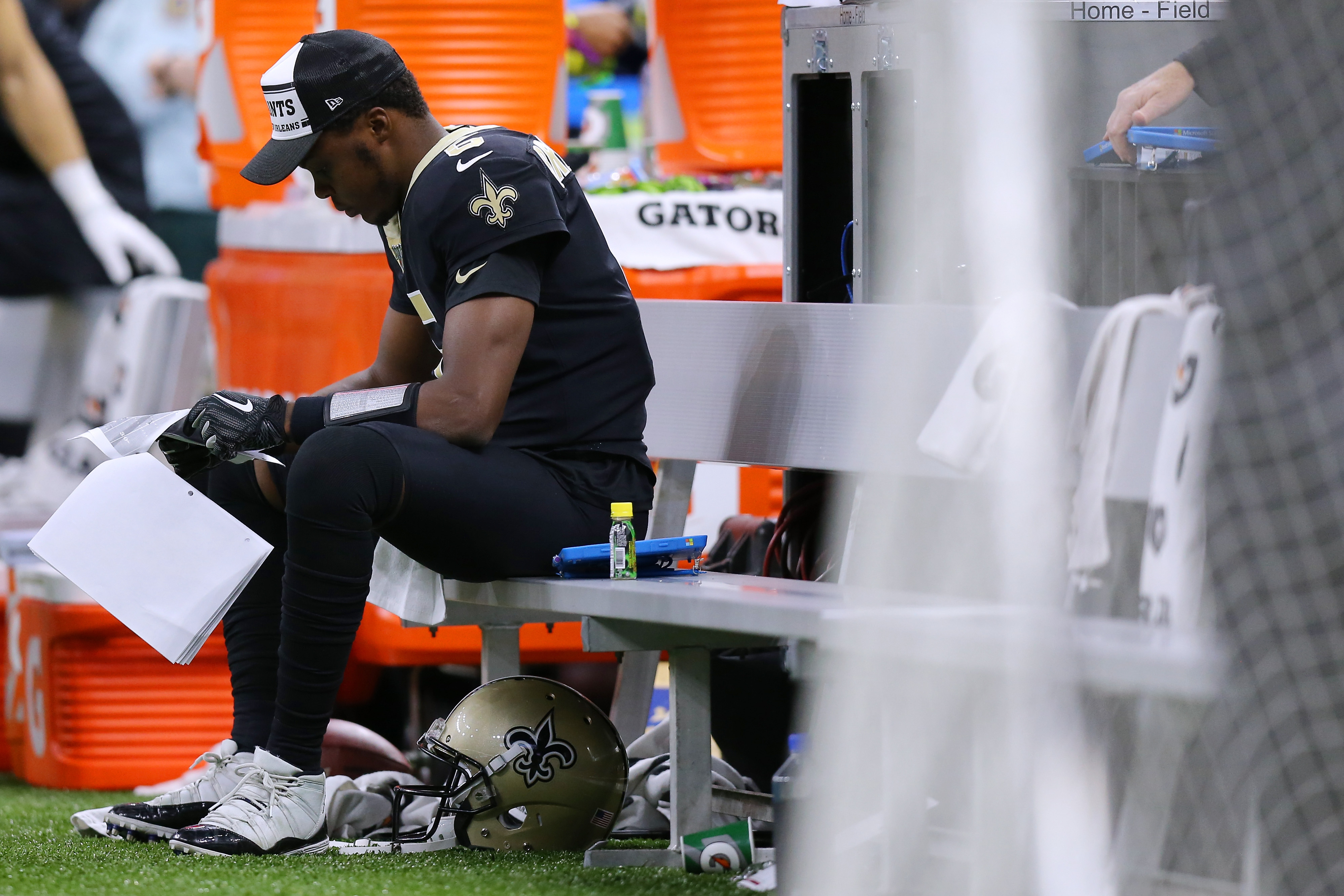 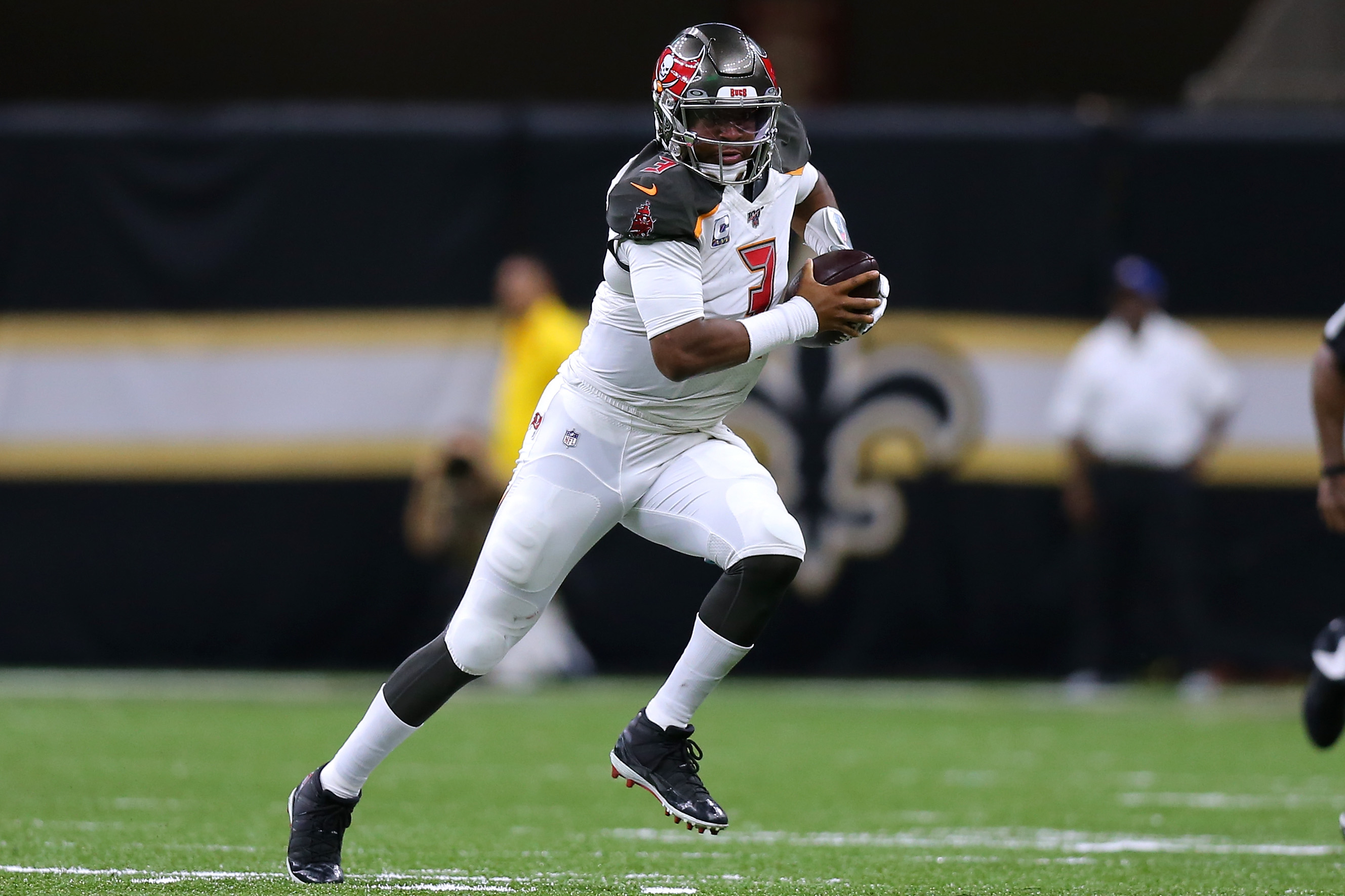 “As time goes on, we’ll learn more about him as a player and person. And that’ll define what he brings to the table for Brand Jordan,” Vick said. “Right now, it’s just an opportunity. … It’s exciting to see guys get opportunities like that. It’s very rare. They could’ve chosen anyone, but they chose him. So we’re watching.”