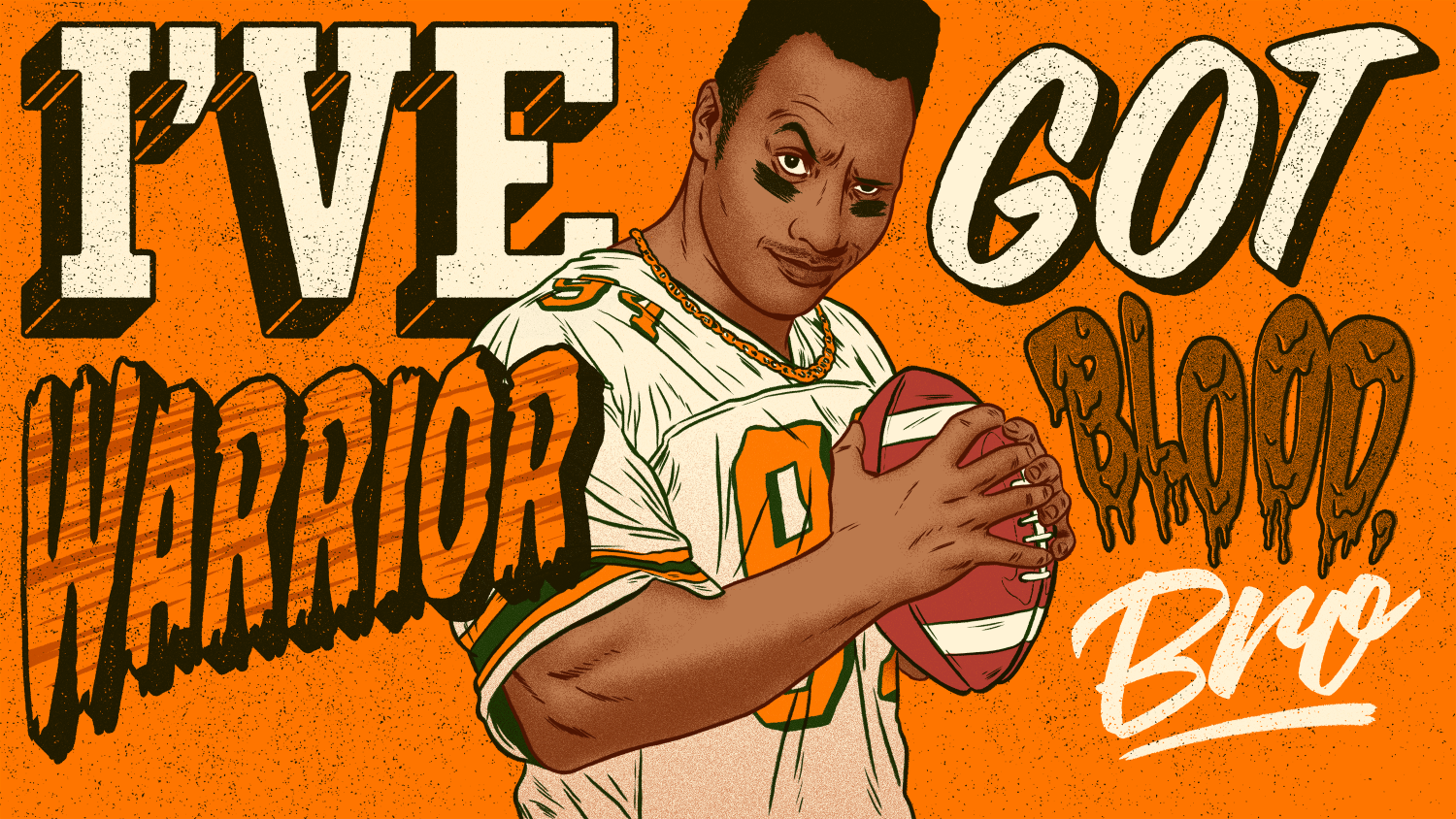 By Rhiannon Walker @InstantRHIplay
May 2, 2018

From actresses Gabrielle Union and Queen Latifah to rapper 2 Chainz, singers, actors and rappers have often bragged about their athletic accomplishments. #ShowMeTheReceipts, a recurring feature at The Undefeated, will authenticate those declarations. In this installment, we verify actor Dwayne ‘The Rock’ Johnson’s receipts.

The four-second scene easily could have been missed if one was not paying exceptionally close attention during Furious 7.

Dwayne Johnson’s character, Luke Hobbs, is sitting in his hospital bed recovering from his litany of injures as the world is going to hell in a handbasket outside his hospital room. His daughter is entertaining herself in the corner, as Hobbs’ attention is on his TV.

Viewers realize he’s watching a football game when they hear the announcer say, “Back to throw. Here comes the blitz! No. 94 sacks …” But just before the game is interrupted by a breaking news segment, the director and editors of Furious 7 drop a quick hint for any vigilant audience members. The Florida State logo is the last thing people see prior to the news transition. (In the clip below, start at 2:10.)

Before Johnson, aka The Rock, made a name for himself as one of the greatest wrestlers of all time or a big-time actor 17 years ago, he was a 6-foot-5, 267-pound defensive lineman for the University of Miami. And that play he and viewers were watching on the TV was of him sacking former Florida State quarterback Charlie Ward in the No. 3 Hurricanes’ matchup against the No. 1 Seminoles on Oct. 9, 1993.

“I was on Twitter a while back saying that my penetration helped clear the way for him to get that sack,” North Carolina State defensive line coach and Johnson’s former Miami teammate Kevin Patrick joked. “He’s a good friend of mine; I love him dearly. I’ve watched almost all of his movies. I think that’s one of the few ones I haven’t seen yet, so I might have to catch that one. That Rampage movie [Johnson’s latest effort, released April 13], my kids have been begging me to see that, but we just haven’t had a chance yet.”

The former World Wrestling Federation/Entertainment star was the second-highest paid actor in 2017, the sexiest man alive in 2016 and on a bit of a rampage in movies and balling in his TV appearances this year. Originally, though, he put his efforts into a football career.

A year after finishing his senior season with Miami, Johnson was cut by the Canadian Football League’s Calgary Stampeders two months into the 1995 season. He had all of $7 in his pocket. But that experience appears to be one of the few things in which Johnson didn’t find immediate success.

He was the WWF/WWE’s first third-generation wrestler — following his father, Rocky Johnson, and grandfather, Peter Maivia — and has more than a dozen championships from the WWF/WWE, World Championship Wrestling, WWF Intercontinental, WWF Tag Team and Royal Rumble. When he graced the big screen in Scorpion King, he earned a Guinness World Record in 2002 for highest paycheck earned by an actor receiving top billing for the first time.

And in 1991, as a freshman on Dennis Erickson’s Miami team, he was a member of the 12-0 national championship squad that obliterated Nebraska, 22-0, in the Orange Bowl. Johnson compiled 77 tackles and 4.25 sacks in one start and 39 appearances as a Hurricane.

Patrick frequently pointed out that Dewey, as he was called by his Miami teammates, in addition to being a fantastic singer, lover of country music and all-around hardworking person, didn’t lack for talent. He just happened to play on star-studded teams throughout his tenure with the program. Johnson never backed down, though, and it showed when the Hurricanes’ lone sack from that game in 1993 came from him tracking down the ever-elusive Ward.

“It makes the hair on my neck stand up even to this day when you look back on those moments and you’re playing with great players and you’re playing against great players, some of the greatest of all time in college football,” Patrick said. “I can go through a laundry list of names of guys that I’ve played. … Dwayne was a hell of a football player. It’s noticed because of who he is now, but he was probably as good as anyone in the country at the time. He just had probably the greatest 3-technique in all of college football and pro football in Warren Sapp playing at the same spot. Just to be out there at that time speaks volumes of what kind of ability he had.”

With 1:51 left in the half, Florida State was on Miami’s 39-yard line with a fresh set of downs and looking to end a second consecutive drive with a touchdown. In the previous series, Ward escaped from the pocket and scampered untouched to the right pylon to give the Seminoles a 21-7 lead over their rivals.

Don’t get it twisted, the record crowd of 72,589 at Doak Campbell Stadium didn’t want Florida State to take its foot off Miami’s neck, with fresh memories of Wide Right I and II still haunting them. And since 1987, two of Seminoles coach Bobby Bowden’s three losses at home had been to the Hurricanes.

Flanked by two Seminoles in the backfield, Ward lined up in the shotgun. Johnson was stationed at the right defensive tackle slot, while Patrick took right end. Miami ran an X in which Patrick would penetrate toward the left tackle and Johnson would fake as if he was going to bull-rush the guard.

Johnson stutter-stepped and looped around Patrick, who was engaged with the tackle and being chipped by the running back simultaneously. The guard, realizing what Johnson was about to do, lunged at him but got caught in traffic at the line. Johnson lowered his left shoulder to absorb less contact, barreled around the corner and found an unsuspecting Ward waiting for him.

The former Heisman Trophy winner and star basketball player at Florida State turned to avoid the pressure — directly into Johnson’s waiting arms. Ward covered up the ball just before impact, and Johnson drove him all the way back to the Hurricanes’ 47. (Start at 46:42 to see the play.)

“I’ve got warrior blood, bro,” Johnson said in a 2016 interview with Sports Illustrated.

Said Patrick: “You have a penetrator and then you have a looper. … The penetrator has the ability to see the upfield rush and take it into the B gap between the guard and tackle to pick the guard. It’s really a great play when you’re on man-on-man side and shortens that turn for the looper, where Dewey can have some success.

“I will tell these young bulls, and they’ll say to me, ‘You can’t catch me.’ And I say, ‘Listen, I caught Charlie Ward at least four times in my career.’ Some of them will know who he is, some of them won’t, and I’ll say look him up. He paved the road for a lot of quarterbacks that have come since then.”

Unbeknownst to Johnson, he would eventually return the favor to Patrick. About two decades ago, Patrick broke up with his girlfriend, Rachel, and realized he had made a mistake.

He begged her to get back with him. Patrick called Rachel and persuaded her to see him. She said she wouldn’t get back with him, so Patrick decided a trip to the mall was in order. Rachel told Patrick to take her home and that she wasn’t changing her mind.

All of a sudden, someone yelled, “KP!” as they were walking through the mall. Patrick brushed it off since, you know, it was a busy mall. Then the same bellowing voice again said, “KP!” So Rachel grabbed Patrick by the hand and he said to her, “Who is it?” She said, “It’s The Rock.”

Dewey came running up, and Patrick introduced Rachel to Johnson. She just stared at him, and Johnson said, “Hey, I’m wrestling tonight in a WWF match, do you want to come? I’ll give you front-row tickets.” Of course Patrick wanted to come, so Johnson turned to Rachel and asked if she wanted to come too. What was she going to say, no?

Two kids later, Patrick said he and his family have seen most of Johnson’s films, with Jumanji being the hands-down favorite among the group.

“If it weren’t for Dwayne, I would not be married to my wife, and he does not know this,” said the 46-year-old Patrick. “Ever since then, my wife has been by my side. Sometimes my wife and I joke about, ‘What if we didn’t see The Rock that day? Would she still have left?’ So I don’t think he knows that, but Dewey, thanks for helping me get my wife back.”

Our conclusion? He’s legit, and an A-1 wingman. Johnson’s receipts get a passing grade from us.