Continuing the conversation toward healing in the community and moving forward with the Black Lives Matter movement is a major priority for Philadelphia Eagles safety Malcolm Jenkins. So it was no big surprise when Jenkins joined members of the Caucus of Working Educators, who share those same priorities.

The New Jersey native is best known for his play on the gridiron, his well-groomed beard and those signature bow ties off the field. But Jenkins should also be as well-known for his social consciousness and dedication to solutions of numerous issues in communities across America. On Jan. 28, Jenkins was part of a five-person panel discussion held at Temple University that concluded Black Lives Matter Week in Philadelphia.

The event was organized by the Caucus of Working Educators (WE), which consists of teachers, counselors, nurses and other support staff who work daily with Philadelphia students. WE’s mission is not only to defend public education, but to transform it. The caucus exists within the Philadelphia Federation of Teachers (PFT), the school district’s largest union.

In the days leading up to the panel, discussion focused on lesson plans intended to teach the 13 different principles of the Black Lives Matter movement to both youth and parent organizations. The lesson plans also add diversity to WE’s largely white membership.

Along with Jenkins, the panel included a grade-school teacher, a college professor, a parent advocate and two high school students. As Jenkins introduced himself to the audience of mostly WE and PFT members in the large lecture hall, he honored the student panelists for their consciousness and education. “I’m learning stuff at 29 that they’re learning at 16 and 17 that I had no clue of … my generation was left out,” Jenkins said.

Not that Jenkins is a stranger to giving back. He serves as chairman of the aptly named Malcolm Jenkins Foundation. Launched in 2010, its mission is “Effectuating Positive Change in the Lives of Youth.” The foundation has four locations: his home state of New Jersey; Columbus, Ohio, where he played college football for the Ohio State Buckeyes; New Orleans, where he played five seasons for the Saints and was a Super Bowl XLIV champion; and Philadelphia.

While the panel spoke candidly about methods to continue the conversation surrounding the Black Lives Matter movement in Philadelphia’s classrooms and communities, Jenkins spoke most highly about collaboration.

“What we don’t do enough is collaborate … a lot of times you have three different organizations supporting the same cause but not working together,” Jenkins said. “They want to be the reason why they were successful. Whether it’s in the gay community, teachers, or athletes, everybody working together can help the cause.” 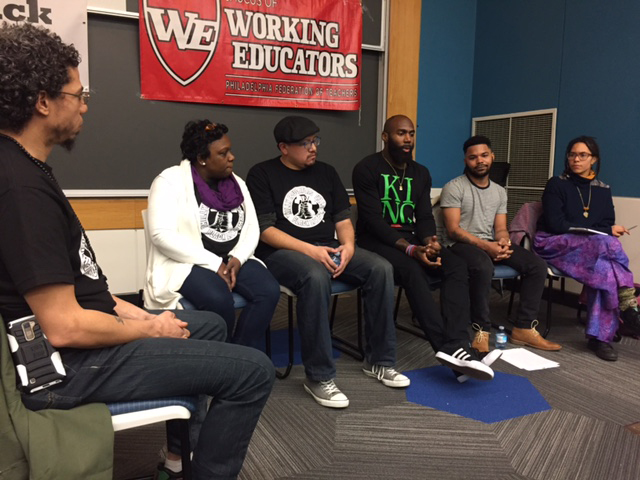 Jenkins also stressed collaboration with people you may not agree with. Last summer, Jenkins and fellow Eagles players rode the beat with Philadelphia police officers to get a window into a cop’s perspective. He added, “I believe you have to talk to the majority about the minority.”

The eight-year veteran safety is also eager to learn government policy. He teamed up with four other NFL players (Anquan Boldin, Andrew Hawkins, Josh McCown and Glover Quin) and traveled to Washington, D.C., in November 2016 to discuss police brutality and race with members of Congress, including Speaker of the House Paul Ryan (R-Wisconsin).

As with many athletes, particularly black ones, Jenkins also deals with craziness via social media, thanks to his political stances. “It’s always stick to football. I got that all year, but not one person has told me that face to face. Ignorance is a teachable moment. They’re just waiting to get educated.”

Perhaps the most compelling part of the panel discussion was a question asked by a teacher who believed she was all alone in educating others about Black Lives Matter. Jenkins referred to San Francisco 49ers quarterback Colin Kaepernick, who took a knee during the national anthem before preseason and regular games in 2016.

“He didn’t tell anyone … he just did it. Obviously, that caused an uproar … but it caused players around the league to want to do something. With us [Philadelphia Eagles] we sat in a room, kicked the coaches out. Leaguewide, we’re trying to do something … if you don’t want to, that’s fine … probably half the room left out. The rest of the room wanted to do something that wasn’t so controversial. ‘Can we lock arms or hold hands?’ I said, no, it doesn’t identify what we’re talking about.”

A locker room of 25 dwindled down to three, including Jenkins. Even though Jenkins was left with just two other teammates — Ron Brooks and Steve Means — he still believed that something had to be done. Three fists were raised on that autumn Monday night in Chicago against the Bears for the entire world to witness during the pregame. Question answered.

According to Jenkins via the Caucus of Working Educators’ website, “If you ever want to change your environment or a system, you first have to be educated on how that system works. That’s why I am on the journey where I am learning the inner workings of systems that have been set up to disadvantage minorities, especially black people. That’s why I am vigilant in my efforts to support and empower people of color.”

According the organization’s website, “More than 100 schools throughout the Philadelphia region have so participated in Black Lives Matter week of action — and momentum behind the campaign is still growing.”