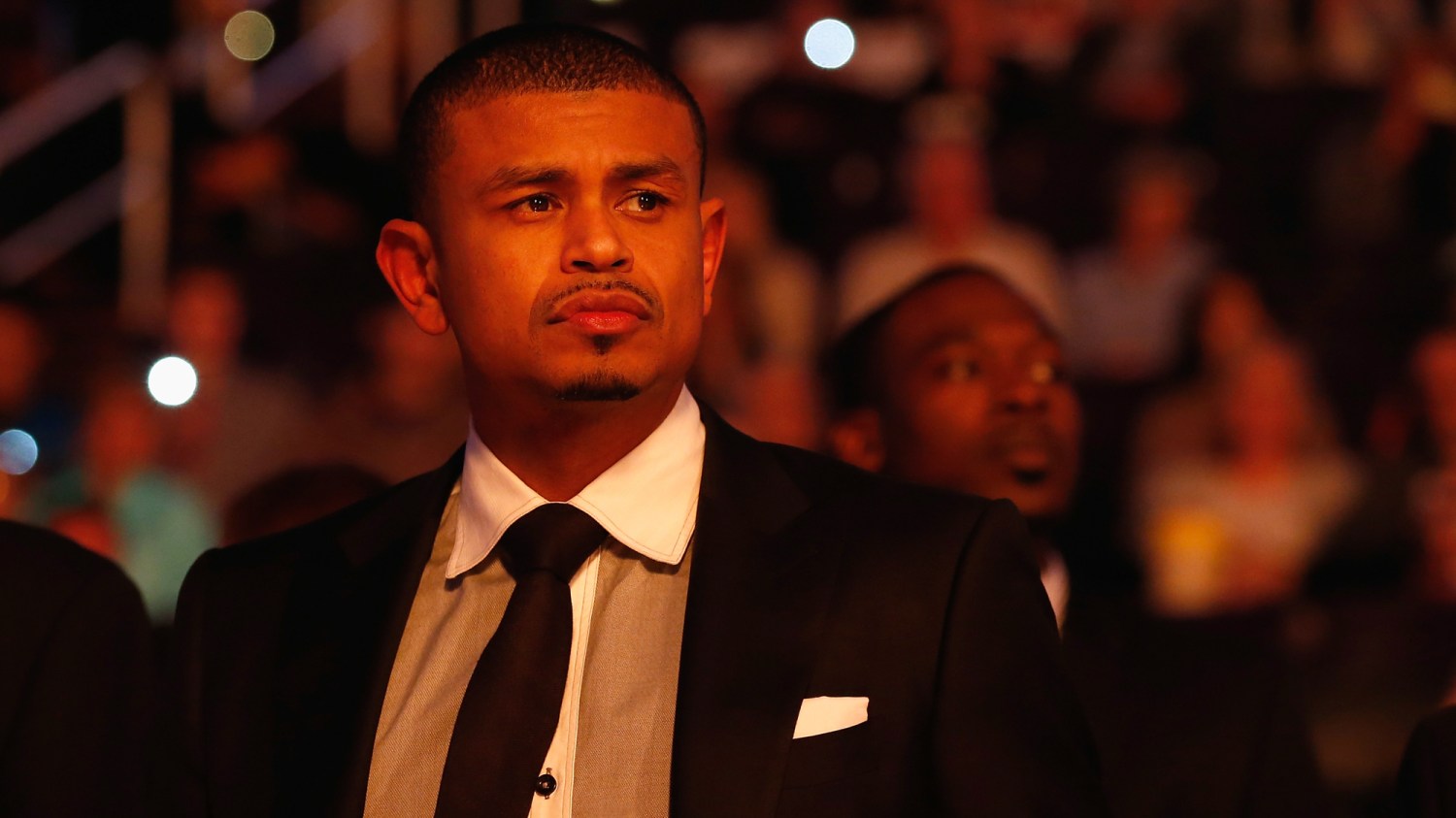 Earl Watson goes after a victory close to his heart

Phoenix Suns head coach Earl Watson and his family are hoping to land justice Friday to help them begin healing after suffering two years of heartache over his brother’s murder.

“I want closure for myself and my family’s healing,” Watson told The Undefeated.

Watson’s brother, Dwayne Hooks, died three days after being shot during an altercation on Aug. 27, 2014 in Kansas City, Kansas.

According to police reports, another one of Watson’s brothers, Fernando Hooks, got into a heated argument with his stepdaughter that day. She departed and returned with her boyfriend, Tremayne Quinn, who got in an altercation with Hooks. A nearby Dwayne Hooks eventually joined the fight. Quinn allegedly brandished a gun and shot at both brothers in the legs as he ran away, according to witness and police reports. The police report also said that a stray bullet from Quinn’s gunshots hit a woman in the leg driving by in a car.

Dwayne Hooks developed blood clots as a result of the gunshots. Three days later, the former policeman was pronounced dead at 48 years old. He left behind two teenage sons, who Watson and his sister are now raising.

“I think about it all the time,” Watson said. “Everything happens for a reason. You know it’s interesting, if we didn’t have life lessons I don’t think that I’d be as resilient as I am now.”

Watson was considering coaching at the time of his brother’s passing, but wasn’t quite ready to retire from playing in the NBA. His impressive list of NBA head coaches included Hubie Brown, George Karl, Jerry Sloan and Terry Stotts, and he also spent a lot of time with the late UCLA legendary coach John Wooden. Indiana Pacers president Larry Bird first put the coaching bug in Watson’s ear when he was playing there. Dwayne Hooks also believed his brother could be a great coach and constantly encouraged him to retire to focus on the new career.

Watson didn’t let Hooks know that he was seriously considering coaching before he was killed. Watson actually accepted an assistant coaching job at St. John’s University from then-coach Steve Lavin, who coached him at UCLA, and it was expected to be announced on July 1, 2013. Instead, Watson changed his mind and signed a one-year deal with the Portland Trail Blazers where he helped mentor their All-Star guard Damian Lillard.

Not long after his brother’s death, Watson took his advice to go into coaching by accepting a job to become an assistant coach with the San Antonio Spurs’ D-League team, the Austin Toros, during the 2014-15 season. He retired with averages of 6.4 points and 4.4 assists in 878 NBA games over 12 seasons — not bad for the 40th overall pick in the second round of the 2002 NBA draft.

Watson was asked to interview with the Suns as an interim head coach for the rest of the season. As exciting as the opportunity was, he sought the blessing of Hornacek before agreeing to interview.

“I called Jeff because if he was discouraged about it, I would walk away from it,” Watson said. “You don’t want to ever interview for a job from a guy who brought you in. It’s torn emotions.”

Watson landed the interim opportunity and earned a 9-24 mark in what would end up being the second-worst overall record in Suns franchise history. One game of note was a 118-111 loss to the San Antonio Spurs on Feb. 21 in which the Suns challenged the NBA power. Watson got scolded by Spurs coach Gregg Popovich afterward for being too hard on himself after not landing the big win.

“[Popovich] told me, ‘Great job.’ I said, ‘Coach, we have to win games. No one cares about great job.’ He got in my face and asked me if I was crazy. ‘Are you f’ing crazy. Great job. I really mean it. You were poised. Your team is playing great. They’re playing for you.’ I told him that I love him. He said, ‘I love you, too,’ ” Watson said.

While Watson was stressed about earning wins, the Suns actually were not judging him on wins and losses with the young and injury-riddled team. The hope was rather to improve the team’s attitude. And when the 2015-16 season concluded, the players’ attitude toward Watson was extremely positive. Several told Suns management before and during their exit meetings that they hoped he was retained .

“What he inherited is maybe one of the toughest situations that any coach has had to inherit,” Suns center Tyson Chandler told The Undefeated toward the end of last season. “What he has done is taking these young guys and put their focus in the right way. I love what he is doing. I love the way he approaches it.

“As just as serious as he was on the court, there is just as much passion [coaching]. His knowledge for the game is actually what I thought he would have been as a young coach. His leading ability … Young guys are usually feeling themselves out. But he surprised me.”

The Suns agreed with their players’ assessment and hired Watson on April 19 as the permanent head coach. He immediately became the NBA’s youngest head coach at 36 years old. Suns guard Devin Booker called it a “great move for our organization.”

“Going into next season we understand that it will be a process, but Earl is the best fit to lead our squad,” Booker said in a statement to The Undefeated. “He’s played the game before. He has experience. We trust him and he trusts us.”

Watson says he wouldn’t be the Suns’ head coach today if it weren’t for a push from his slain brother. He hopes to pay him back by his push for justice.

“If he didn’t talk to me about coaching, about following my heart, about following my dream, I would still be doing veteran minimum contracts, playing basketball, trying to gauge what was next for me like when do I coach,” Watson said. “It’s the greatest thing that ever happened to me and I believe life is a choice — I tell my son that every day. My brother’s death was powerful, moving, and it forced me to make a choice to either follow my dream or hide in a jersey to overcome my tragedy.”

In a letter written to the state of Kansas, Watson wrote:

“Tremayne Quinn, a guilty suspect that has made a mockery of the judicial system, showing signs of disrespect from courtroom ‘selfies’ with friends to grins over this tragic experience, which brought great confusion upon his release on May 5, 2016.

“Dwayne Carlos Hooks was our son, brother, father and an inspiration to us all. As a family that not only represents the state of Kansas, but our family name worldwide, we do not ask for a favor, but yet justice.”

Watson also added that his family has had sleepless nights and endless tears, but has also grown closer since his brother’s death.

“We stand stronger than ever to expect the righteousness of justice!”

Quinn’s lawyer, Debera Ann Erickson, did not return a phone message from The Undefeated. Quinn also had a previous lawyer who withdrew on Jan. 21, 2015.

Watson said he will be in attendance when sentencing takes place Friday. A victory in this court case would mean more than any game he can win as a coach or player. He is also bracing for the worse, pledging not to give up on his hometown if Quinn is set free.

“No matter what happens at sentencing, I still have faith in my city of Kansas City, Kansas,” Watson said, “and I will continue to give back to the youth and make change.”

Earl Watson told The Undefeated that Tremaine Quinn received 36 months of probation and no jail time on Friday for the Aug. 27, 2014 shooting of his brother, Dwayne Hooks. Watson attended the sentencing in Kansas City, Kansas, and said he told Quinn that he forgave him and asked him to change his life.

“My family is powerful. My mom hugged him and said she forgave him,” Watson said.