Eric Reid on Kaepernick: ‘Colin is at home with my kids. He should be playing.’

In his debut with his new team, Reid, the first player to kneel alongside Colin Kaepernick in order to shine a light on racial injustice and police brutality when they were San Francisco 49ers teammates, reaffirmed his political position Sunday as he began the next chapter in his NFL career. None of Reid’s teammates joined him in demonstrating during the national anthem and, undoubtedly, many in the crowd at Bank of America Stadium objected to his form of protest and the beliefs that inspired it. No matter.

Reid remained authentic to and for his activism. For him, having a new work address won’t change that.

“Everybody in this [locker room], everybody who watches this game [and] everybody in this country knows what we’re talking about. It’s the truth. You can’t deny it. We’ve just got to do more to make this better,” Reid said after Carolina’s 33-31 victory over the New York Giants.

Although Reid appeared at ease while resuming his longtime pregame ritual, he guarded his plans entering the game. It would have been surprising if he hadn’t.

Through collusion grievances, Reid and Kaepernick, who are close friends, allege owners conspired to keep them unemployed because of their approach to addressing social justice issues. Their cases are moving forward.

Kaepernick, who has had success as a quarterback in the NFL, has been sidelined since the end of the 2016 season. A member of the 49ers for the first five seasons of his career, Reid became a free agent when his contract expired in March. Unsigned throughout the offseason, training camp, the preseason and the first few weeks of the regular season, Reid previously discussed considering other ways to draw attention to his stance.

The Panthers did not ask Reid about his plans before he signed, he said, and he has mulled his options. In the end, Reid reverted to what worked best for him.

“It’s bittersweet,” Reid said. “I won the game, but Colin is at home with my kids. He should be playing.”

Before the game, Reid informed Panthers head coach Ron Rivera and some Panthers players that he would kneel. Not that Reid sought permission. At this point, he doesn’t need validation. Moreover, Reid was further inspired by current events, including the confirmation of controversial judge Brett Kavanaugh to the Supreme Court and the hiring of the police officer who fatally shot 12-year-old Tamir Rice in Cleveland four years ago by another police department in Ohio.

“I feel our country is moving backwards. The only way to change that is to keep talking about it, keep raising awareness [and] keep doing what we’re doing.”

After his demonstration, Reid stood and walked toward the Panthers’ bench. He was warmly greeted by many teammates, beginning with All-Pro defensive end Julius Peppers, who shook Reid’s hand and hugged him.

“I told him earlier in the week I was going to support him regardless, whatever he did,” Peppers said. “I wanted to make sure he felt comfortable doing what he did. … He adds a sense of culture to our team, and we’re embracing it.”

Reid understands that his brand of activism is not for everyone. And he doesn’t judge players who choose to stand during “The Star-Spangled Banner.” He does, however, appreciate any form of support his teammates have offered as he fights to overcome the results of centuries of systemic oppression. As he has done often, Reid evoked the names of African-Americans whose deaths have united civil rights activists in the pursuit of justice.

“Four hundred years of this. Four hundred years,” he said. “Emmett Till. Sandra Bland. Tamir Rice. Alton Sterling. The list goes on. It’s unacceptable. I can’t close my eyes and go to sleep at night without feeling like I did something to try to make this place better.”

With so much attention on Reid’s actions before the game, one could almost have forgotten that the Panthers signed him to fill a key role for the remainder of the season. Because of veteran safety Da’Norris Searcy’s concussion problems, Carolina placed him on injured reserve. For someone who hadn’t practiced or played since Week 17 of last season, Reid was impressive in preparation for the Giants. He started, was credited with three unassisted tackles and received a supportive shoutout on Twitter from Kaepernick.

“I’m not surprised by that,” Reid said. 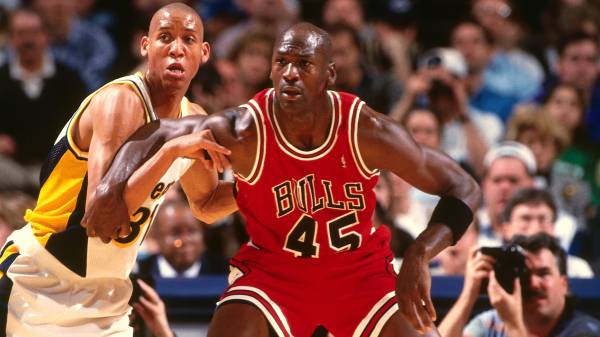 ‘I’m back’: The day Michael Jordan announced his return to the NBA Read now

Reid returned in a thriller, which was capped off by Panthers place-kicker Graham Gano’s 63-yard game-winner with only a second remaining on the game clock. Reid’s enthusiasm, though, was tempered because Kaepernick remains on the outside looking in.

“It’s bittersweet,” Reid said. “I won the game, but Colin is at home with my kids. He should be playing.”

Finally, Reid got back in the game. It’s what he and Kaepernick have wanted. But after all this time, it appears increasingly unlikely Kaepernick will be as fortunate.