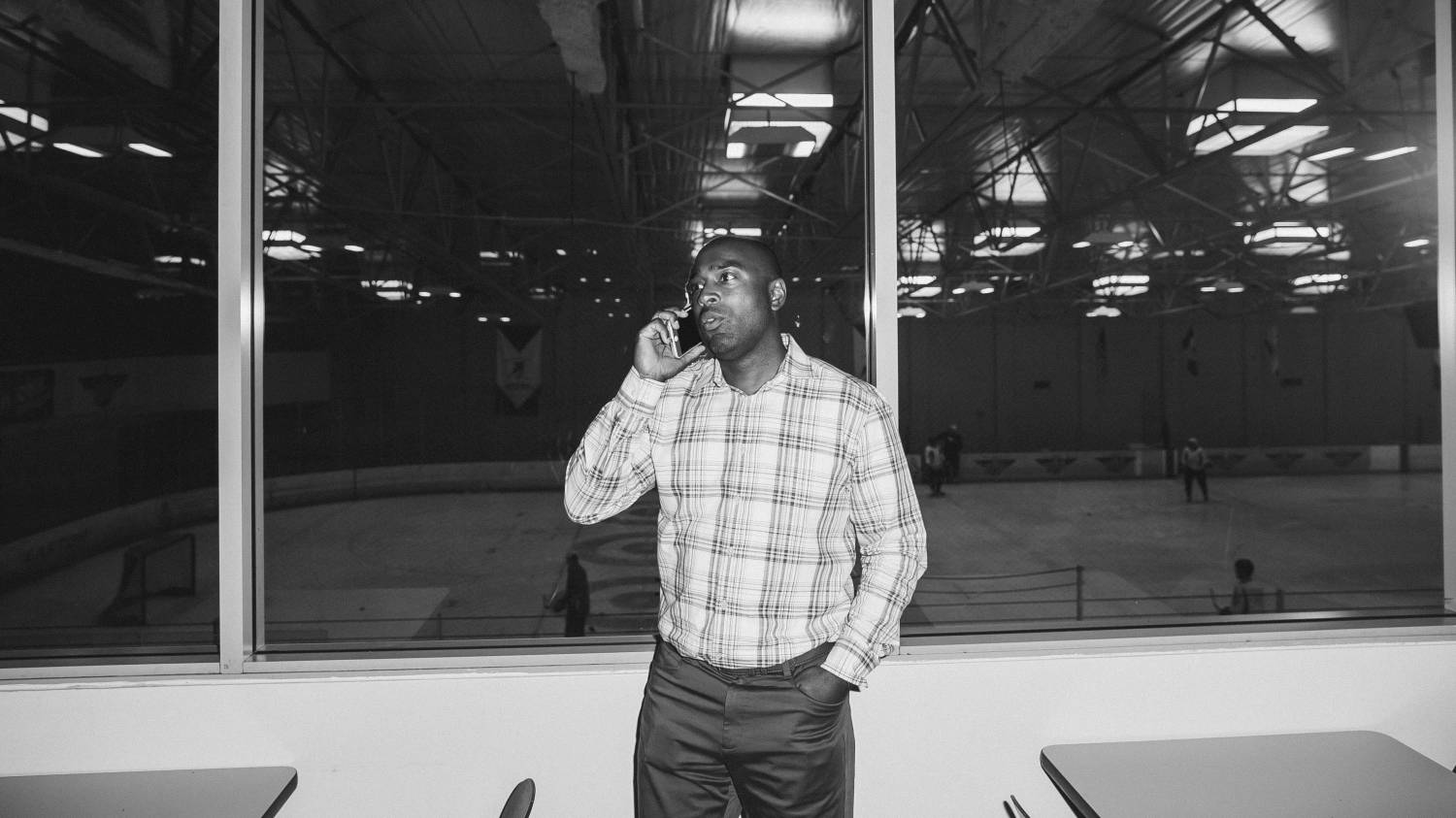 Eustace King on the upper deck of the Ice Station Valencia in Santa Clarita, CA where King’s players frequently practice. Kayla Reefer for The Undefeated
NHL

Eustace King is representing in the NHL

Eustace King broke through in hockey not only as a player but also as an NHL executive and a sports agent.

King transitioned to representing players after working for the NHL Diversity Task Force, the forerunner of “Hockey Is For Everyone,” the NHL’s project to get kids who are not from traditional hockey areas interested in the sport.

“I have always talked about working in hockey, since we [Oates] were younger, but we didn’t know how. Obviously we both wanted to be players, but we were fringe hockey players,” King said. “He made it further than I did.”

King took a risk striking out on his own, a risk that might not have been possible if his mother had not taken one decades earlier.

King’s mother, Lillian, emigrated from Jamaica the week that Martin Luther King Jr. was assassinated in 1968.

“Her parents begged her not to go, but she felt like America was a great place to raise a family,” King said. “She was a seamstress, and she thought that if she went over to the United States to make some more money, she could bring it back home and open up her own shop in Jamaica. Or if she was good enough, she could do it in the United States.”

King, 45, grew up in the Chicago suburb of Evanston, an area known for producing youth hockey talent. He went on to become the goaltender of the nationally ranked men’s ice hockey team at Miami University from 1992-96.

King’s experiences playing youth hockey translated well to his career as an agent. When some of the players King represents were subject to racial slurs from fans and players, he could empathize because it happened to him when he played.

“They used the N-word. They’re like, ‘You know, f–k this n—-r,’ or you know, stupid stuff. But at the end of the day, they would just cuss me out or give me the finger or whatever,” King said. “Through my life as an athlete and what I’ve gone through, I felt, feel like it’s my job because the players are younger than me. And I’m also advocating for them to make sure the guys understand, hey, at the end of the day, there are some positive things and there are some demanding things that can impact your career.”

He also knows that hockey culture continues to have issues with race.

Stewart, who is in his 11th season in the NHL, was one of King’s first clients after he was drafted No. 18 overall by the Colorado Avalanche in 2006. They bonded over the fact that both their fathers were from Jamaica.

“We met when I was 18 years old. He was there from the beginning. It helped that he was Jamaican, so we had that connection right away,” Stewart said. “We talked over oxtails and curry goat. I felt comfortable. Every agent is qualified for the job, but sometimes you have individual needs. And when Wayne [Simmonds] was looking for an agent, I told him about Eustace.”

King and his partner Oates made an impression when they went to the home of Simmonds, who as 17 at the time. Like King, Simmonds’ family had left Jamaica for North America.

“They put a really good presentation together. I thought they had a good team. They came correct,” Simmonds, 29, recalled. “He understood. Not many people understand where we came from, especially playing the game of hockey. He’s a better person than agent.”

King has stood behind his players, especially when two of them were at the center of racial incidents for different reasons.

Within a 13-month span, Simmonds had a banana thrown onto the ice during a preseason game and, while playing in the Czech Republic during the 2012 NHL lockout, fans chanted, “Opice, opice!” which translates to “Monkey, monkey!” in English.

“This isolated incident, you know, wasn’t really isolated. It was something that needed to be addressed going forward, and I wanted to make sure that, hey, this is Wayne Simmonds’, an athlete’s, workplace,” King said. “This is where they work, and just because it’s where they work doesn’t mean that they’re allowed to be harassed at their workplace. I wanted to make sure that the fans understood that there would be repercussions.”

Journeyman enforcer Raffi Torres, a Canadian of Mexican descent, drew criticism in 2011 for using blackface when he dressed up as Jay-Z and Torres’ wife dressed up as Beyoncé for the Phoenix Coyotes’ Halloween party.

“I can honestly tell you that growing up in Canada, Raffi didn’t understand the history and the sensitivity of some of the things that have happened,” King said. “He knew about the big picture, but he didn’t get it because he didn’t grow up in that culture. And, and again here’s a guy who was a huge Jay-Z fan and he was doing it because he idolized them and wanted to be like them versus trying to create some kind of slander or some ill will towards black people.

“So again, I was stuck in a situation where I’m now on the other side of it where I’m trying to educate my athlete to make sure Raffi Torres understood the ramifications of what he’s done, but at the same token trying to let people understand that I don’t feel that there was any racial overtones of intent by what he was trying to do. But I can see how people can draw that conclusion.”

King also has his players’ backs when they take a stand on polarizing issues. Brown donated $1,500 to assist in the removal of a Confederate statue in Tampa, Florida, after he saw the white supremacist march in Charlottesville, Virginia.

“Good for him. I’m glad he stood up for something he believes in,” King said.

Brown was also the only player in the NHL who spoke out when Columbus Blue Jackets and Team USA coach John Tortorella said in 2016 that he would “bench” any player who, like then-San Francisco 49ers quarterback Colin Kaepernick, didn’t stand for the national anthem.

Of all the players King represents, Simmonds stands out because of the way he raised his game.

Simmonds, once a minor part of a blockbuster trade that sent popular Flyers captain Mike Richards to the Los Angeles Kings, is the reigning NHL All-Star Game MVP.

“I’m so proud of Wayne right now, what he was able to accomplish this year. He was able to give back to the community and have his own foundation and charity. It’s called ‘Wayne’s Warriors,’ and you know he was nominated by the NHL for a humanitarian award,” King said. “Here’s a young black man who grew up in Scarborough, Ontario, and now became an MVP of the NHL All-Star Game and then moved on from there to actually become one of the top humanitarians this year in the National Hockey League.”

Simmonds said his relationship with King evolved because of it.

“He got it from day one. We’ve come full circle. We’re more so ‘boys’ than an agent and client relationship. When I got the monkey chants in Europe, Euie had my back,” Simmonds said. “They [O2K] talk to everyone the same, no matter if you score 30 goals or three goals. He’s straightforward. If you played like s—, he’s going to tell you you played like s—.”

Closeness peppered with brutal honesty. That’s the relationship King has with the players he represents.

“They took a liking to me because they felt that I understood them well. And I understood what they went through and their backgrounds because I lived it just before them,” King said. “People don’t know how hard it is to get there. I didn’t make it, but then they see me on the business side.”

Evan F. Moore is a Chicago-based journalist, educator and syndicated columnist who writes about the intersection of sports, race, violence, politics and culture. He survived the Donald Trump Chicago rally and lived to tell about it.