OAKLAND, Calif. – After I begged my father Curtis Spears over and over again, he bestowed on me the birthday present I so badly wanted 30 years ago: Tickets to see Kareem Abdul-Jabbar’s last game in Oakland.

It was April 8, 1989, 14 days before my actual birthday. Abdul-Jabbar was just days before his 42nd birthday, and it showed. The NBA legend scored only eight points in 17 minutes in front of a rare sold-out crowd at the Oakland-Alameda County Coliseum. But the Los Angeles Lakers still went on to drill the Golden State Warriors 122-89.

Before the game, the NBA’s all-time leading scorer got the coolest retirement gift from the Warriors: a yacht that had “Captain Skyhook” inscribed on it. I remember saying over and over to Pops throughout the night, “I can’t believe they gave him a boat.”

Thirty years later, I can’t believe I am saying goodbye to what is now known as Oracle Arena.

The Warriors might have played their final contest at Oracle Arena after their 105-92 loss to the Toronto Raptors on Friday, falling behind 3-1 in the NBA Finals. Golden State has played in this aging venue for the past 47 years in East Oakland, and will move to the new posh Chase Center in San Francisco next season. Whether the Warriors come back for a swan song in Game 6 of these Finals or not, the venue will always have special memories for me and countless others with Bay Area ties.

My fondest memories are going to Warriors games with my father, who now lives in New Orleans. He still watches every Warriors game closely while wearing one of his blue and yellow T-shirts. I probably played the biggest role in my father becoming a Warriors fan after begging him to take me to games starting in the sixth grade. About once or twice a season, we watched the likes of Eric “Sleepy” Floyd, Larry Smith, Rod Higgins and Purvis Short struggle with the Warriors in the 1980s. My steak-loving father’s reward was eating at Sam’s Hofbrau before games. 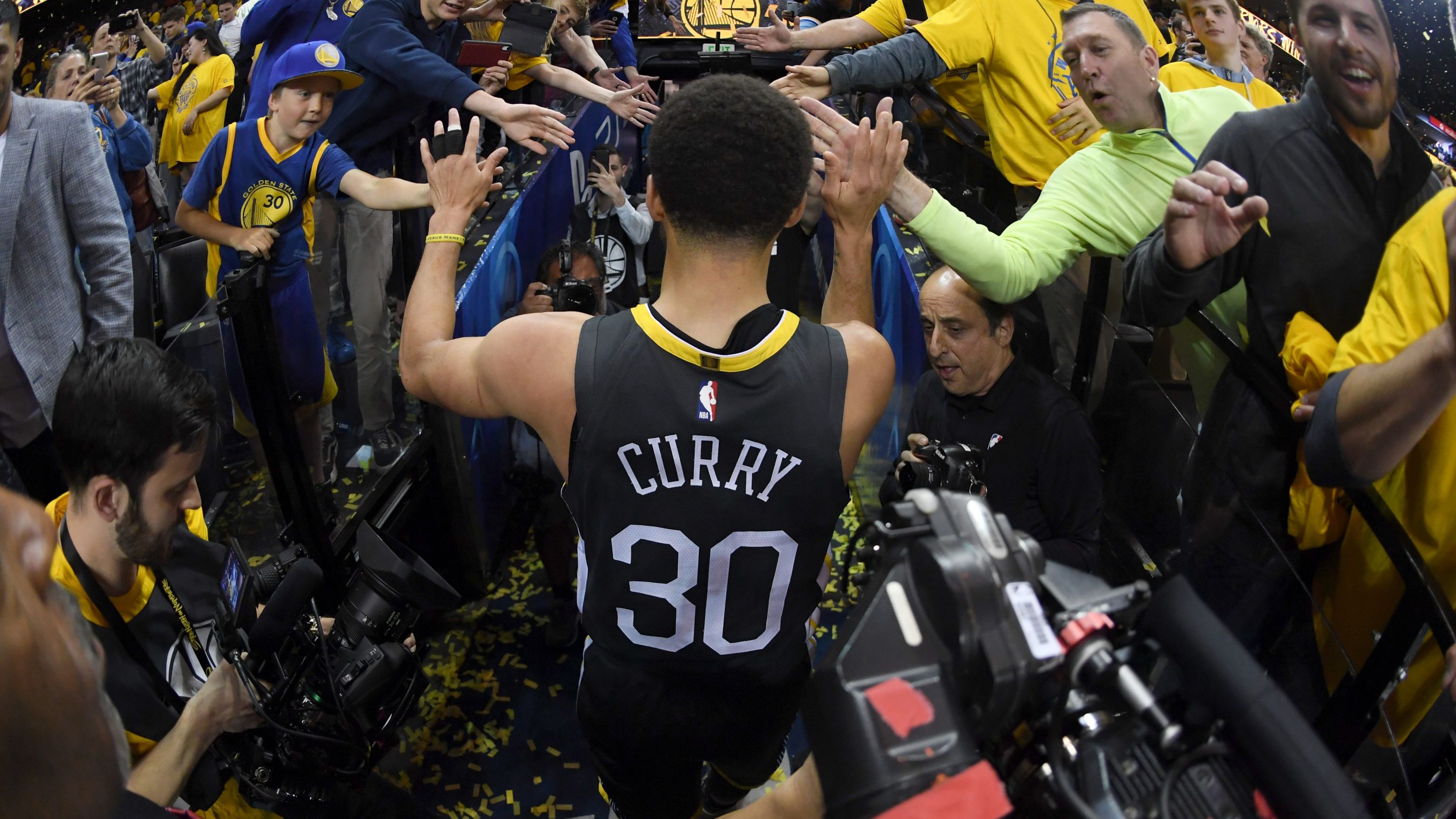 Honestly, back then, Bay Area folks went to games to see the stars on the other teams, not the Warriors. So, my dad and I usually went to see Abdul-Jabbar, Magic Johnson and the Lakers. On one occasion we saw Atlanta Hawks star Dominique Wilkins, who was one of my favorite players until I saw him up close.

My bad, ‘Nique. You still had hops, though.

My dad used to be a warehouse manager for New United Motor Manufacturing Inc., now a Tesla factory, not far from Oakland in Fremont. One of his co-workers was the father of my San Jose Andrew Hill High School classmate Sandra Carrera. One day during my senior year she came up to me and said, “Hey, my dad has an extra ticket to see Michael Jordan and the Bulls. He wanted me to ask you if you wanted to go.”

“Hell, yeah,” was probably my response. So, thanks to the Carreras, I got to see Jordan play in person as a Bull for the only time in my life. He scored 29 points despite missing 17 of 29 shots in a 104-91 win over the Warriors on Nov. 25, 1989. I told Sandra numerous times to tell her dad I said thanks.

The first time I got to go on the Coliseum floor was when Avery Johnson, whose first youth basketball coach was my uncle Neil “Squeek” Armant, gave me postgame passes after a San Antonio Spurs game in 1991. I remember being in awe of touching the hardwood, not knowing that it would eventually become part of my job.

After I spent 10 years covering the NBA in Denver and Boston, another NBA writing gig brought me back to the Bay Area, when I moved to Oakland’s Jack London Square neighborhood. The Warriors had a rookie named Stephen Curry, who would eventually spend time living in a high-rise condominium on Broadway between 3rd and 4th streets. Several years later, Curry and the Warriors would make the first of five straight Finals appearances.

While the Warriors had finally changed for the better, what never changed were the dedicated people that worked at Oracle.

There are countless cool security guards like Curtis, who passes the ball to Curry for the tunnel shot. Always smiling Norm is outside the Warriors locker room. Outside the visiting locker room is Leumel, who went to my high school and prays for me. Grady, another security guard, took a picture with me before Game 4.

Then there’s Miss Alisha, who stood 6-foot-7 while working with game operations. James has the nicest Afro at the scorer’s table. VIP suites liaison Miss Adrienne rocks the coolest head scarfs. DJ D-Sharp and I have thrown parties together. Emcee Franco Finn’s mother is somehow a fan of mine. Walter always gives me the Bible study notes from the players’ chapel. His wife, Lori, is the first black woman to work on a scorer’s table in the NBA. Paul, the Warriors’ ticket guru, is a cool white dude to break bread with. Miss Joslyn, who sets up the pregame media meal, can always make you laugh. And I try to give BMW lounge director Katherine a hug every game.

There are so many other cool characters working at Oracle who I failed to mention but also have much love for. Coincidentally, most of the people working at Oracle are African American or people of color. Whether they get a job at Chase Center remains to be seen. Whether they can make the challenging trek from the Oakland area to the new venue is another question. Whether they will lose money from another team moving is a painful concern.

One person who won’t be going to San Francisco is Jermaine, Oracle Arena’s parking lot supervisor, who is a truly caring man. On March 22, 2018, I tore my patella tendon in my right knee after I slipped while walking down my steps at home. After surgery, I couldn’t travel from the end of that regular season until the arrival of the Western Conference finals. That basically meant that the playoff games I covered were primarily at the Oracle. Once Jermaine got wind of my injury, he made sure a driver took a golf cart to scoop me and my crutches from the car to the security gate before games and back to the lot after games. It probably did not seem like a big deal to Jermaine and his parking lot attendants, but it meant the world to me. It made my life easier during a trying time. And not a Warriors game goes by without one Oracle Arena employee asking me how my knee is doing.

Win or lose the Finals, the Warriors will be fine as they cross over the Bay Bridge to San Francisco. What happens to the security guards, parking lot attendants, concession workers, custodians and many other workers at the Oracle remains to be seen. Their pockets will inevitably be impacted without the Warriors and their 41 regular-season games and playoff games. My prayers are with you all, my friends.

So while the Warriors have been taken out of Oracle, the memories and friendships that were made there will never be taken away.