Some led their teams for years, while others didn’t make it through the first game

On Tuesday, the New York Giants announced that 14-year starter and two-time Super Bowl champion Eli Manning would be benched for the remainder of the season. The 36-year-old quarterback had started 210 consecutive regular-season games since being selected No. 1 overall in the 2004 NFL draft, a streak that is second all-time to former Green Bay Packers quarterback Brett Favre (297).

Starting in Manning’s place on Sunday will be Geno Smith, who will become the first black quarterback to start for the Giants in the team’s 92-year history. The Giants are the last team in the NFL to start a black quarterback, after the Indianapolis Colts (2015 season) and New England Patriots (2016).

With Smith’s ascendance to the starter’s role, he joins the list of black quarterbacks to break through the racial glass ceiling in the NFL, including the league’s first Super Bowl champion (Doug Williams), lone modern-era Hall of Famer (Warren Moon) and most revolutionary player (Michael Vick).

Ahead of Smith’s first start with the Giants, here’s a look at the 23 black players who made the first start at quarterback for all 32 NFL clubs in the Super Bowl era (1967 to now), and how each player fared after his initial game.

After former starter Jake Plummer left for the Denver Broncos, Blake signed a three-year, $7.5 million contract to take over the Cardinals offense. That lasted just 12 games, as Blake was replaced by 24-year-old second-year player Josh McCown, and his contract was terminated at the end of the season. Blake was also the first black quarterback to start for the Cincinnati Bengals in 1994 and New Orleans Saints in 2000.

In the pre-modern era, versatile player Joe Lillard was used sparingly as a thrower/quarterback and started 12 games for the Chicago Cardinals during the 1932 and 1933 seasons.

Vick served primarily as a backup to veteran Chris Chandler during his 2001 rookie season, making one start in Week 9 because Chandler was injured and another during Week 17 after the Falcons had been eliminated from the playoffs. Vick started five seasons before dogfighting charges sent him to prison in 2007.

Banks was named the Ravens’ starter after the first six games of the 1999 season because of a 2-4 start behind first- and second-stringers Scott Mitchell and Stoney Case, respectively. Banks kept the starting job until eight games into the following season, when he was benched in favor of Trent Dilfer, who led Baltimore to its first Super Bowl victory. Three seasons later, Banks was the Texans’ first black starter as well.

No. of subsequent starts for team: 2 (3 seasons)

Harris started the first game of the 1969 season for the Bills, making him the first African-American quarterback to start a season opener. He completed just 3 of 12 passes for 74 yards and an interception before giving way to Jack Kemp.

Peete, who was also the first black quarterback to start for the Lions in 1989, was named the Panthers’ starter a week before the 2002 season opener, replacing Chris Weinke, who went 1-14 as a starter the previous year. Peete’s Carolina tenure ended after just one and 1/16 seasons, though. Jake Delhomme replaced him after Week 1 in 2003 and led the Panthers to the Super Bowl.

Evans won the starting job heading into the 1979 season, but back spasms kept him out of action for most of the year. He lost all three of his starts before becoming the starter the next two seasons. Evans was also the first black starter for the Los Angeles/Oakland Raiders in 1987.

After an 0-7 start to the 1994 season, starter David Klingler was replaced by Blake, who became a Pro Bowler in 1995 with 3,822 yards and 28 touchdowns. After six seasons, Blake signed with the Saints, where he became that franchise’s first black starter as well.

No. of subsequent starts for team: 3 (2 seasons)

Mays filled in for starter Brian Sipe, who fractured a bone in his shoulder nine games in and was lost for the rest of the season. Mays served as a backup for the Bills the following year, his last in the NFL.

Collier started the final game of a lost 7-9 campaign for Dallas (its first losing season in 22 years). He was responsible for two interceptions and two fumbles before being pulled halfway through the game. He signed with the Pittsburgh Steelers the following year.

No. of subsequent starts for team: 4 (1 season)

Briscoe was the first black quarterback to start a game in the Super Bowl era. The converted defensive back threw for 1,589 yards and 14 touchdown passes (still a team record for a rookie) and rushed for an additional 308 yards and three scores in his lone season as a Broncos quarterback. He was cut from the team shortly afterward and converted into a wide receiver.

Mr. Holly Robinson Peete was drafted by the Lions in the sixth round of the 1989 NFL draft and earned the starting job during the preseason but missed the first three games of the regular season because of a sprained knee. Peete won 21 games in five years before signing with the Cowboys in 1994. Peete also became the first black starter for the Panthers in 2002.

After starter Aaron Rodgers suffered a broken collarbone, Wallace stepped in for the Packers during a Week 10 game against the Eagles, lasting barely seven minutes before injuring his groin. Wallace was placed on injured reserve two days later and never played another NFL snap.

No. of subsequent starts for team: 2 (3 seasons)

With starter David Carr out with a sprained ankle, Banks filled in for one game, leading the Texans to a 14-10 victory. Later in the season, with Carr battling a sprained shoulder, Banks started two more games. He wouldn’t start another game in the NFL.

Freeman was signed off the street for the last week of the season after starter Andrew Luck and backups Matt Hasselbeck and Charlie Whitehurst were all taken out by injuries. Freeman completed just 53.6 percent of his passes in that lone game against the Titans and hasn’t played a game since. In the pre-modern era, the Baltimore Colts reportedly started quarterback George Taliaferro in 1953.

Garrard started the season finale of a 6-10 campaign for the Jaguars in place of starter Mark Brunell. That spring, Jacksonville drafted another black quarterback, Byron Leftwich, who took over for Brunell three games into the 2003 season. Garrard would bide his time the next four years, eventually becoming the regular starter in 2007.

No. of subsequent starts for team: 0 (2 seasons)

Moon, who made his final NFL start for the Chiefs, was a trailblazer, not just for black quarterbacks playing in the NFL but for breaking starting barriers too. Moon was the first African-American starter for four teams (Chiefs, Vikings, Seahawks, and Titans/Oilers), the most of any black quarterback.

Harris started for the original Los Angeles Rams — before they moved to St. Louis, and eventually back to L.A. — and also the then-San Diego Chargers decades before the team’s move to Los Angeles in 2017. He started nine games during the 1974 season, ending in a Pro Bowl selection. 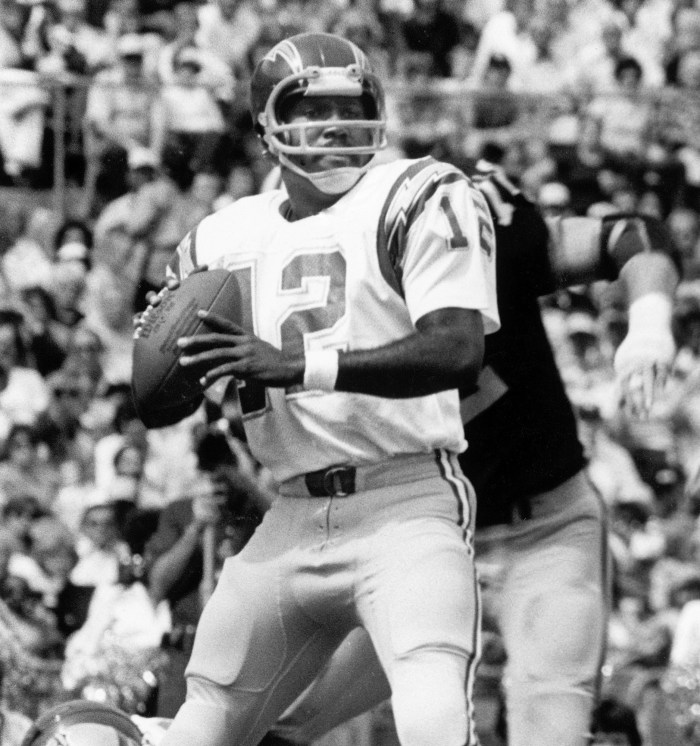 Three seasons after breaking the color barrier with the Rams, Harris was traded to the Chargers, where he started nine games during 1977 because of starter Dan Fouts’ contract holdout.

No. of subsequent starts for team: 5 (2 seasons)

Lucas was thrust into the starting spot for the Dolphins after Jay Fiedler went down with a broken thumb on his throwing hand. After six starts, Lucas suffered a nerve injury in his neck, paving the way for Fiedler’s return in Week 14.

Moon was traded to the Vikings in 1994 and immediately named the starter. After two 4,200-yard seasons, injuries and a contract dispute ended Moon’s time in Minnesota, eventually paving the way for Randall Cunningham to be the team’s second starting black quarterback in 1997.

No. of subsequent starts for team: 1 (1 season)

Brissett filled in for starter Tom Brady and backup Jimmy Garoppolo, who were unable to play because of suspension and injury, respectively. He went back to third string once Brady returned. Brissett is starting in place of the injured Andrew Luck in Indianapolis now.

The Saints, in a year when the team won its first playoff game in franchise history, started their first two (and only) black quarterbacks in the same season when Aaron Brooks replaced the injured Blake near the end of the regular season. Blake never regained his job, leaving the Saints the following season.

No. of subsequent starts for team: TBD

Smith will fill in for Eli Manning for at least one game this season, although he is not expected to be the long-term answer for the Giants. Fellow backup quarterback Davis Webb is also expected to see playing time in the final five weeks.

Jones started just a few drives in one game in his lone season in the NFL. Super Bowl hero Joe Namath replaced him in that one start.

No. of subsequent starts for team: 6 (8 seasons)

Evans played for both the Los Angeles and Oakland Raiders, making his first start during the 1987 strike season as a “scab” and again in 1993 and 1995. In his first start, Evans threw for 248 yards and two touchdowns in a 35-17 win over the Chiefs, his lone victory as a starter.

Cunningham was drafted 37th overall in the 1985 NFL draft and played 11 seasons in Philly before injuries caused him to be benched in favor of fellow black quarterback Rodney Peete in 1995. Cunningham took a year off before joining the Minnesota Vikings in 1997.

No. of subsequent starts for team: 6 (4 seasons)

Gilliam started one game during the 1973 season after starter Terry Bradshaw separated his shoulder. After going back to the bench, Gilliam got a second chance during the 1974 NFL strike, crossing the picket line and starting the first six games of the season before Bradshaw took over again and won Super Bowl IX.

No. of subsequent starts for team: 5 (1 season)

After his falling-out in Minnesota, Moon latched on with Seattle at age 41, setting franchise records for completions and passing yards in his first season.

After an injury to starter Steve Spurrier, Dickinson started one game for the Buccaneers, throwing an 18-yard touchdown. But, as fate would have it, Dickinson suffered a foot injury and didn’t even finish the game.

Moon went undrafted in 1978 and didn’t compete in the NFL until six years later after spending time in the Canadian Football League. The Houston Oilers won his contractual rights in a bidding war, and Moon would go on to start 10 seasons before being traded to the Vikings in 1994.

Williams lost his only two starts during the 1987 “scab” regular season but threw for 666 yards and seven touchdowns in the playoffs, leading to a Super Bowl XXII victory over the Denver Broncos, the first time an African-American quarterback won a Super Bowl.