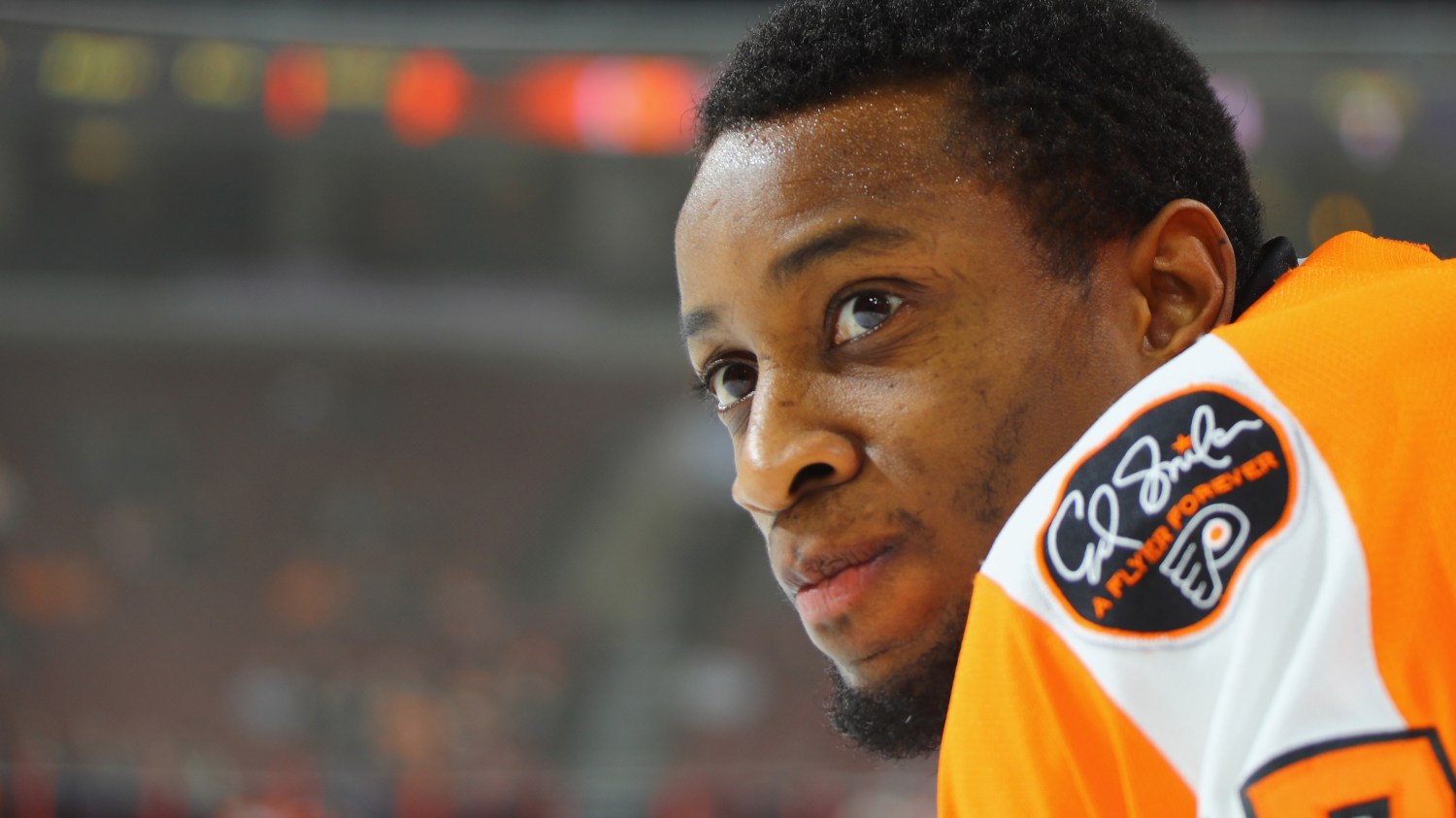 PHILADELPHIA, PA – DECEMBER 19: Wayne Simmonds #17 of the Philadelphia Flyers skates in warm-ups prior to the game against the Nashville Predators at the Wells Fargo Center on December 19, 2016 in Philadelphia, Pennsylvania. Bruce Bennett/Getty Images
NHL

Flyers’ Wayne Simmonds is trying to add some color to hockey

He’s having his best season ever, and he wants more than NHL fans to know that

Enjoying arguably his greatest season ever, Simmonds wants to be revered as more than a player. He wants to be thought of as a role model, and he believes he’s on his way to becoming one.

An African-Canadian, Simmonds is an oddity. According to the National Hockey League, only 16 players of African descent have played in a game this season.

“I’m playing the game I love,” he said. “For me, I’m just trying to set an example for kids who are like me, who have been in my situation. They can look up to me as an example. If I can make it, they can make it, too. When I was a young kid, I looked up at people as inspiration. Willie O’Ree was the first African [-Canadian] to play. He was my goal.”

Simmonds knows his history and is aware that he’s earning a lofty place in NHL lore. He’s playing well enough to earn an All-Star team berth. His quiet but confident play and demeanor stands out on the rink. It also stands out away from the arena.

A bachelor millionaire, Simmonds can arguably walk through any black neighborhood with his uniform on and not be recognized. By contrast, because of his hockey notoriety, he would need a police escort to trek through a white enclave dressed in a suit.

“It’s a little weird,” Simmonds said. “I’m playing a predominantly white sport and the majority of people who see me play are white. Having more black players playing in the league would change that. You see what All-Star Nashville Predators defenseman P.K. Subban is doing now. We’re trying to [create] a little more notoriety for ourselves. We’re playing in a league where there are not a ton of black players playing. We’re trying to let it be known that we’re here. We’re trying to inspire the next generation of kids who look like us.

“I stick out like a sore thumb, no matter where I am. I don’t mind it. I probably get more notoriety than a lot of guys for the way I look. That’s fine with me. If it helps the younger generation, I’m all for it.”

Simmonds isn’t the first player of African descent to play for the Flyers. According to the club, that honor goes to former NHL right winger Claude Vilgrain, who played in two games for Philadelphia during the 1993-94 season. Since then, the Flyers have featured five other players of African descent, including Simmonds. Teammate Pierre-Edouard Bellemare, a left-handed-shooting right winger, was born in France. His father was born on the Caribbean island of Martinique. Donald Brashear, an African-American from Indiana, played four of his 16 NHL seasons in Philadelphia while African-Canadian Ray Emery, an All-Star goalie during his career, played three of his 11 seasons with the Flyers. Another African-Canadian, Sandy McCarthy, played two of his 15 NHL seasons in Philly.

It’s not easy being a player of African descent in the NHL. During a preseason game against the Detroit Red Wings at John Labatt Centre in London, Ontario, on Sept. 22, 2011, a fan threw a banana on the ice when Simmonds was attempting a shot during a shootout. The man, Christopher Moorhouse, was fined $200 after entering a guilty plea.

His lawyer, Faisal Joseph, said Moorhouse was unaware of the racial connotations of throwing the fruit. Faisal said Moorhouse was caught up in the drama of an overtime shootout. Simmonds’ late third-period goal tied the game, and he was approaching Detroit goalie Jordan Pearce in an attempt to clinch the match when the banana was thrown.

On Oct. 28, 2012, while playing for Liberec of the Czech Extraliga during the NHL lockout, fans of the opposing team Chomutov yelled the word “opice,” which means “monkey” in Czech, at Simmons. Chomutov general manager Jaroslav Veverka issued a statement saying fans who made the comments were not welcomed back at the arena.

Simmonds, who was part of a megadeal with the Los Angeles Kings, has grown to become a fan favorite in Philadelphia. It’s not unusual to see white fans proudly wear his jersey. Statistically, he’s among the league leaders in goals scored. Since Jan. 1, only Washington’s Alexander Ovechkin (43) and Pittsburgh’s Sidney Crosby (50) have more goals than Simmonds’ 39.

When he was with the Kings, Simmonds was a defensive player and made his mark killing penalties. He had three power-play goals in three years for the Kings. This year, he’s doing both. His eight power-play goals lead the Flyers and tie him for the league lead.

“He leads by example,” said Flyers rookie center Travis Konecny. “He works hard. He makes players around him better. You can’t help but learn by watching him play. I’m learning so much being around him.”

Simmonds’ improvement as a player has been consistent and impressive. He’s scored 29, 28 and 32 goals, respectively, in each of the last three seasons. He’s currently tied for third in the league with 16 goals to go along with 13 assists. His stellar play may earn him a spot in the 62nd NHL All-Star Game set for the Staples Center on Jan. 29, 2017.

The accomplishment, which would aid his quest to change hockey’s appearance, is within reach.

“One thing that hurts the game a lot is that it’s expensive,” Simmonds said.”I believe the cost is preventing a lot of [minority] youngsters from playing. If the cost of playing comes down, I think you’d see more players like myself.

“I try not to let outside things get to me. I’ve been discriminated against a lot, and I’m still here doing my thing. I want to be a difference-maker. I want to be that guy who makes a difference for my team.”