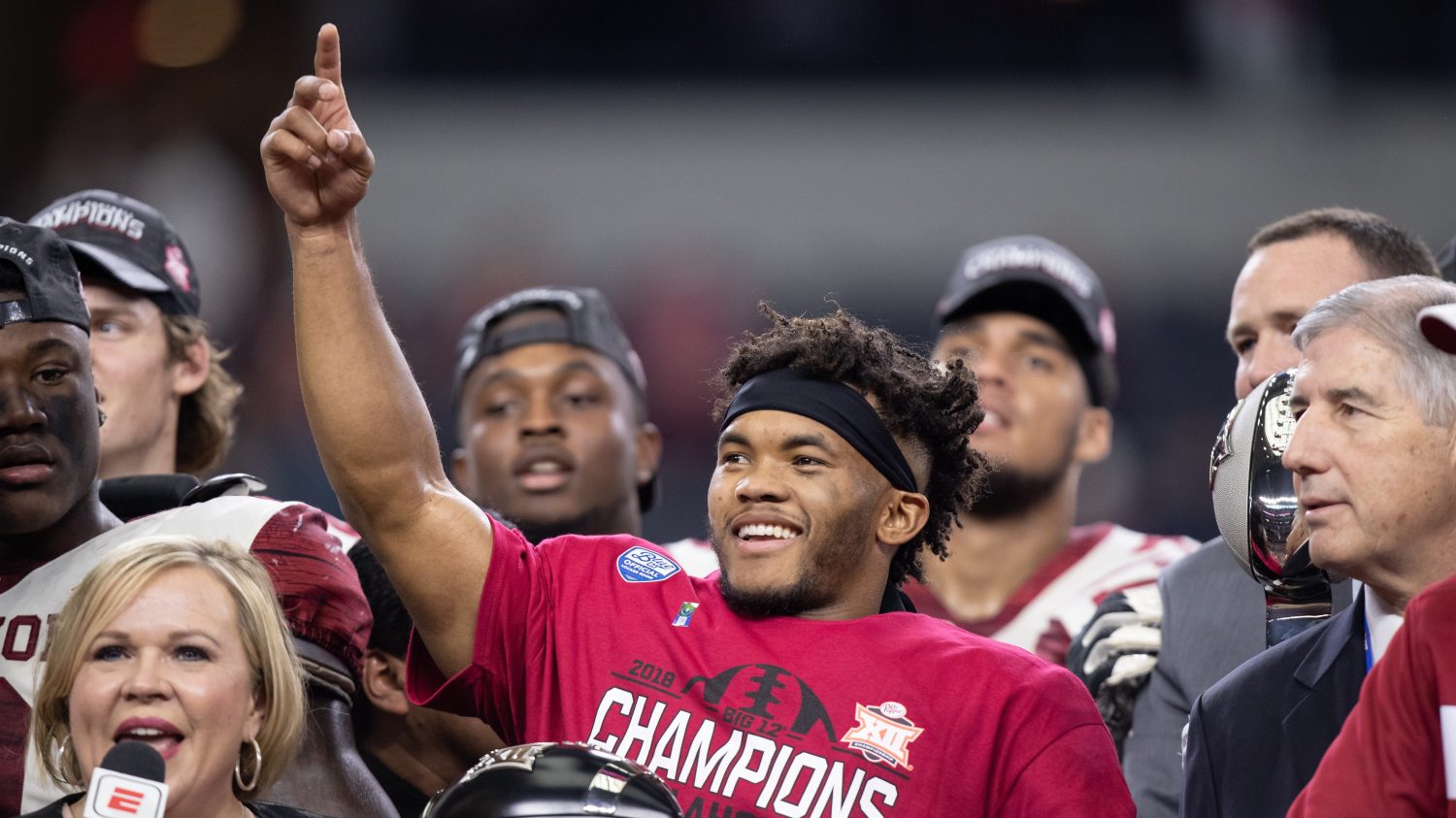 Oklahoma Sooners quarterback Kyler Murray celebrates after the Big 12 championship game between the Sooners and the Texas Longhorns at AT&T Stadium in Arlington, Texas, on Dec. 1. Matthew Visinsky/Icon Sportswire
Commentary

ATLANTA — On the second floor of the College Football Hall of Fame, Kyler Murray sits at a small table in front of a display about the history of tailgating. Rocking a crimson Oklahoma University warm-up suit and Jordan 11 Concords, he looks right at home answering questions about the College Football Awards, where he would win the Davey O’Brien Award for the country’s best quarterback.

Earlier in the day, he won the Associated Press Player of the Year award. And he’d add to his collection later that weekend in New York, winning the Heisman Trophy, the most prestigious award in the sport.

But this Saturday, his Oklahoma Sooners will face off against defending national champion Alabama in what could be Murray’s last game as a football player.

In November, Murray said he plans to give up football for baseball after this season. On Thursday, he said “nothing has changed,” though he hasn’t ruled out the possibility of playing in the NFL. “It’s never bad to have options,” Murray said.

Arguably the greatest quarterback in Texas high school football history, Murray was picked ninth overall by the Oakland Athletics in the 2018 MLB draft and agreed to a $4.6 million signing bonus. (Shockingly, he was still allowed to play one more season of college football.)

If the A’s can successfully keep Murray from the NFL, the impact on young athletes would be immeasurable. If the best college football player in America can be persuaded to play pro baseball, presumably his path can be followed elsewhere as well.

In other words, Major League Baseball has as much on the line as anyone during the College Football Playoff.

Murray’s football career is beyond storied. If you took Varsity Blues and mated it with Friday Night Lights, you’d get Allen High School. The school’s football stadium holds 18,000 people. (In 2018, the A’s averaged a little more than 19,000 per game at their home park.) The kid never lost as a starter and won three straight state titles.

At the same time, he was finding success on the infield.

“He started as a sophomore for us, but I still kind of saw him as a stud football player. But, man, he had some tools,” said Paul Coe, Allen’s baseball coach. “In his junior year, he just broke out. He hit nine home runs, led our team, led our team in stolen bases. He just took his game to another level that year.

“There was a point in time when he was doing a lot of the [football] stuff in the summer so he didn’t get to play as much baseball. Once he finished football and he started hitting baseballs in January and February every day? His game just took off.”

In college, playing baseball proved to be a time management challenge as much as anything. But Murray’s plan all along was to go to a school that allowed him to play both. After transferring from Texas A&M, Murray sat for two seasons on the Oklahoma football team behind Baker Mayfield, who went No. 1 overall in the 2018 NFL draft.

Getting two coaching staffs on the same page about how to improve a player in both sports is a discipline that not every coach is familiar with, but both Oklahoma’s football coach, Lincoln Riley, and baseball coach, Skip Johnson, were prepared to tackle for their star from the get-go.

“You know, he practiced with us as a team less than 10 times, show up at 5:35 for a game, [assistant] coach [Clay] Overcash would throw him batting practice, and [Murray would] go out and play the game and get two hits,” Johnson said. “Football and baseball coming together to help an athlete. That was what was more unique than anything, because I think that’s a special thing that a lot of people can’t say.”

Murray hit 10 homers, batted .296 and stole 10 bases in 51 games in 2018. It was a far cry from the previous season, which even Murray admits didn’t go well upon his conversion to the outfield.

“My first year playing baseball at OU, you would have thought I was garbage,” Murray joked in Atlanta. “It’s really windy in Oklahoma. It’s tough to read the ball off the bat. It wasn’t easy, so I had to work at that. The next year we made a big jump.”

M3 | Kyler Murray gets all of it for his 10th home run of the season.

Part of the success was due to the fact that both coaching staffs had figured out how to juggle Murray’s schedule.

“Balancing the baseball and football, the biggest challenge is on him, of course,” Riley said. “Every spring practice, just about this year, this guy would go through a full meeting, a full football practice. I’d give reps to him 10 minutes early so he could hustle over there and take five or six swings of BP and then go play college baseball at a high level.

“Traveling back and forth, very few days off, but the kid did it, and we learned a lot from last year. You look at kind of his success, he didn’t play much for us footballwise last year. When he did, he played well, but he had just an average year two years ago baseballwise. And I really think we all learned — us, our baseball staff and Kyler — how to manage it.”

Multisport stars are not entirely uncommon at the college level. But most aren’t playing for two squads that are nationally ranked.

Rusty LaRue is one of two people to actually play three sports in the same year in the ACC at Wake Forest. He chose to play pro basketball and won an NBA title with the Chicago Bulls. Charlie Ward, Heisman Trophy winner at Florida State in 1993, also picked hoops and had a 10-year career in the NBA. Brian Jordan made it to both the NFL and MLB from the University of Richmond. Deion Sanders has a 30 for 30 dropping soon about his decision to try to play an NFL and MLB game on the same day, and Bo Jackson’s career is so storied that he and Murray were directly compared in a throwback photo shoot. There’s also plenty of precedent for guys playing baseball then returning to football after the former didn’t work out.

you vs. the guy she told you not to worry about pic.twitter.com/C1gr3Zg4v1

All of these players had decisions to make, but the most recent example that compares to Murray’s was one with much less fanfare. Jameis Winston, quarterback of the Tampa Bay Buccaneers, was in the mid- to upper 90s with his fastball at Florida State. He wasn’t just a thrower — Winston could pitch. But he was nowhere near the hitter that Murray is, and his talent was beyond raw.

“It really didn’t take that long to make that decision when you know you’re gonna be the No. 1 overall pick, you know you were gonna be a top pick in the NFL,” said Winston, who last year talked about possibly returning to the diamond. “I think it’s different in terms of the baseball draft, where being the No. 1 overall pick, you have to go to a lot of different farm leagues and you have to do this, that and the other. Even though you work your way up faster in baseball when you’re drafted in the first round, in the NFL, you’re straight right into it.”

Which has got to be baseball’s biggest concern.

Perhaps the nature of the games once you get to the pro levels changes Murray’s interest. But does a kid used to the bright lights and biggest stages really want to spend time working on fly balls with the Beloit Snappers? If so, and he makes the majors, his health and his financial upside are decent, but it certainly wouldn’t be the kind of money he could make as a first-round pick who makes it to a second contract in the NFL.

But he’s still less than 6 feet tall, which is not ideal for an NFL quarterback. And the growth he’s exhibited in a few years on the diamond has been remarkable, hence the high draft selection.

“I think outfield’s going to be his future because he hadn’t spent a lot of time on the dirt,” said Johnson. “He could probably play second base — I mean, you go into instructional league and stuff like that — but I think this guy’s going to make the jump as he goes through. He’s going to learn more and more because his aptitude is really, really high. He’s really smart.

“He’s a really quick-twitched kid, so we want to give him an approach where it gave him a lot of rhythm in his swing. I think that was a big deal for him. He works extremely hard. A lot of people, they work hard to be good, but he works hard to be great.”

When Murray plays baseball, his socks come above his knees where they tuck into his pants, just like on the football field. The look isn’t exactly unorthodox, but it certainly is a style that people who care about these things notice. He knows that America’s pastime needs a swag injection, which he takes seriously.

“If I’m going to be honest with you, it’s hard to watch baseball on TV,” he said with a laugh. “I like players with swag. There’s not many of those guys in the league. But Cargo [Carlos Gonzalez], Bryce [Harper], Mookie [Betts], obviously, he’s a dog. There’s a lot of good players. I feel like it’s something we need more. But I definitely feel like the game is getting that way.

“You look at the Futures Game, you know there’s kids of color all over the field, it’s just what it is. If it keeps going in that direction, the game’s getting more athletic, a lot of dudes [in the pros] are more athletic than they’ve ever been. Guys are throwing 105 [mph]. It’s getting out of hand, honestly. I mean, dudes are hitting the ball further than they ever have. I don’t know, the game’s changing for sure.”

For all the diversity programs, showcases and camps that Major League Baseball wants to create, implement and help foster, there’s no equal to the best college football player in the country choosing to play your game as a way to send a message to young kids that it’s a sport worth pursuing. Letting athletes know they don’t have to dedicate their entire lives to one game in order to get a shot at the next level is almost antithetical to the underpinnings of youth baseball at this point. Specialization rules the roost and gets the most eyeballs.

More selfishly, just seeing what Murray can do if he becomes a full-time baseball player is something the sport deserves. He’s effectively never done just baseball. Getting to meet the A’s in Oakland in June gave him a small look at the life.

“When I was in Oakland, it was just like, ‘These dudes get to do this [every day],’ ” Murray said. “They wake up and that’s all they’re doing is baseball. I think it’s all reps. Once you get to do something every day, you get to go hard at it, I feel like you just get better at it.”

Murray is an excellent baseball player, plain and simple. He’s got easy power, quick feet and everything a scout could possibly want on the diamond. At every level, coaches said the more he played the better he got.