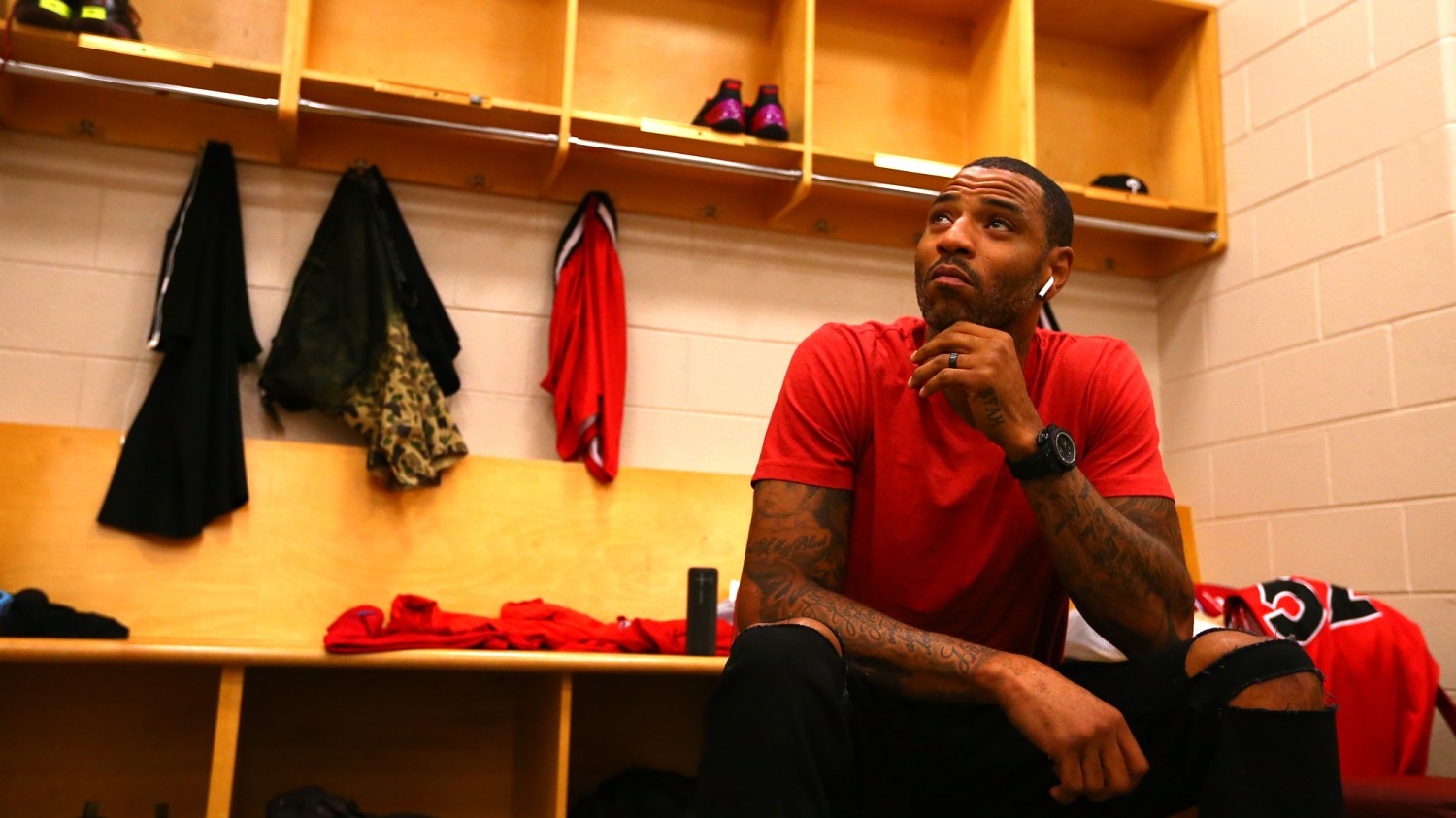 Kenyon Martin #4 of Trilogy prepares in the locker room during week four of the BIG3 three on three basketball league at Wells Fargo Center on July 16, 2017 in Philadelphia, Pennsylvania. Mitchell Leff/BIG3/Getty Images
The Next Chapter

For Kenyon Martin, the next chapter includes finding peace in family and BIG3 league

On a sunny, 83-degree day in Camden, New Jersey, more than 300 kids were gathered at the North Camden Community Center for a free basketball clinic sponsored in part by the BIG3 basketball league. Cheerleaders from the South Jersey Fire cheer squad pumped up the crowd before groups of children from first to eighth grades took center court, participating in basketball warm-up drills. The older groups, ninth grade and up, did the same on the outside courts.

In front of the community center, a black, unmarked sprinter van carrying former NBA forward/center Kenyon Martin and former NBA guard Andre Owens pulled up to the building. When the two entered, all activities temporarily ceased as a group of participants rushed to surround the ballers. From the looks on their faces, it was plain to see that some kids were unfamiliar with Martin and Owens, who were in their prime before some of them were conceived. On the other hand, there were looks of admiration from the older boys and girls who instantly recognized Martin — he was drafted No. 1 overall by the New Jersey Nets in 2000 and played four seasons for them — before they started toward him for pictures and autographs.

This is Martin’s life post-NBA retirement. Not as grueling as an NBA schedule, but just the right amount of activity to keep him busy. Outside of appearances, Martin finds himself making up for the family time he lost during his 15 hectic seasons in the NBA.

“I got five little ones, and for me, being at home, being able to take my youngest son — who’s into wrestling — to WrestleMania for his birthday means everything,” Martin said. “Going to my daughter’s ballet recitals. All that kind of stuff. That’s what outweighed the NBA for me. Not playing in the league and only [playing in the BIG3] one day a week, it’s an opportunity for me to be there and do things that I missed out on while I was playing and just growing and building as a family. I just want to be their dad, be their father. They didn’t ask to be here. I love them dearly, and I’m going to do my part.”

According to Martin, Ice Cube contacted him directly to discuss his vision for the league and the mission behind it. It didn’t take long to persuade Martin to take up the offer to join other former players back on the court for competitive games. Before they hung up, Martin was sold.

“[Ice Cube] grew up a Lakers fan, of course, but a lot of us have been a part of people’s living rooms and barbershop talks for the last 20-plus years,” Martin said. “For you not to see those guys play anymore … Ice Cube was giving us the opportunity to continue our careers at a less strenuous pace: playing half-court, playing 3-on-3 and only one game per week.”

Before retirement, Martin was confident in his abilities to continue playing basketball and knew he still had what it took to help a team win, but he decided to make his 15th season his last go-round in the professional realm after noticing how much interest from NBA teams had dwindled. In July 2015, Martin made it official.

“I loved basketball, I loved competing, I loved being out there, but I looked at it as I was going to work and I treated it as such,” Martin said. “But basketball wasn’t my life. Some people don’t know what to do without the game.”

“Teams didn’t have any interest in my services, and that’s a telltale sign,” Martin said. “… Once I got waived, that was my key for me to step away. I’m too prideful to be put in those kinds of situations. I know my abilities and I know what I was still capable of doing, but if can’t nobody else see it and these other teams can’t see it, then I can’t force them to see it. It was time for me to put the NBA in the past.”

Although the decision was easy for Martin, he hadn’t anticipated the rough transition from a professional basketball player to immediately finding a normalized lifestyle that worked for him. One thing Martin knew for sure was that defining himself outside of basketball wouldn’t be a problem. For Martin, basketball was the way he earned a living — it was never his identity.

“I loved basketball, I loved competing, I loved being out there, but I looked at it as I was going to work and I treated it as such,” Martin said. “But basketball wasn’t my life. Some people don’t know what to do without the game. They don’t know where to turn to. From what I grew up and came out of, making it out of high school was a big deal. If you do anything after that, it’s a plus. Where I’m from … no former athletes come back and talk. None of that. I had to learn on the fly. There was no, ‘You can be good at this if you do this.’ For me, it was just making sure I was a productive member of society and not being a burden to nobody. I played basketball, football and baseball growing up. I played all three of them up until high school. I was tall and athletic, so I just decided to stick with it.”

Yet, catching a glimpse of basketball games still sparked feelings of frustration. The thought of not being able to walk onto an NBA court was emotionally taxing, but Martin prioritized his time by setting aside moments during his day to “soul search” and found ways to center himself through his family.

Out of his five kids — three girls and two boys, ages 16, 14, 12, 3 and 2 — Martin noticed the natural skills his son, Kenyon Martin Jr., possessed in the sport his father chose more than two decades ago. The high school sophomore and eldest of Martin’s kids is already on recruiters’ radar.

“He’s 16 now, and he’s more skillful than I was at his age,” Martin said. “He handles and dribbles the ball better, but I was always athletic and I always played hard. That separated me from a lot of people. And he’s getting there, but he’s just starting to turn a corner where he realizes he has to play harder than everybody all the time. I was successful at what he’s trying to do, which is be a professional basketball player, so all I can do is guide him. I know what it takes to get there. I’m just trying to help him achieve his goals in life. It’s my job and my obligation to give him all the tools and put him in the right situation so he can try to make that happen for himself.”

Giving the fans what they want

When he’s not juggling family and basketball, Martin is spending time finding his next venture.

Kobe Bryant and the power to control the narrative Read now

“I’ve been doing the TV thing. Me and Michael Rapaport have an NBA show [Two Man Weave] we do,” Martin said. “There’s a new coconut water I’m part owner in called Life Recovery; it’s in 7-Eleven now. I have a car service in Los Angeles that we’re trying to expand, but I’m just trying to figure it out. I have a few other things that I’m interested in. Moving forward, I think I’m a hell of a cook — I can get on that grill. I’m a Texan, so I think my barbecue is immaculate. I might do some TV shows for cooking and a few other things. I’m just trying to see what’s gonna stick without being pigeonholed to one thing with basketball. I’m just trying to put some things in a few different hats and see what sticks for me.”

Martin hasn’t been on the court since Week 1 of the BIG3’s schedule because of a pulled hamstring, an injury he’d never suffered throughout his collegiate or professional career, but he will be ready to roll for Week 5 in Chicago. The following stop, July 30 in Dallas, will be a homecoming of sorts for Martin, who grew up in Oak Cliff, an area of South Dallas.

“Dallas is going to be fun,” Martin said. “It’s not my first time playing there, but this is something new to give friends and family the opportunity to play. It’s been a few years, so it gives them an opportunity to get to see me do my thing again on this level with these guys. My mom and my family are all excited.”