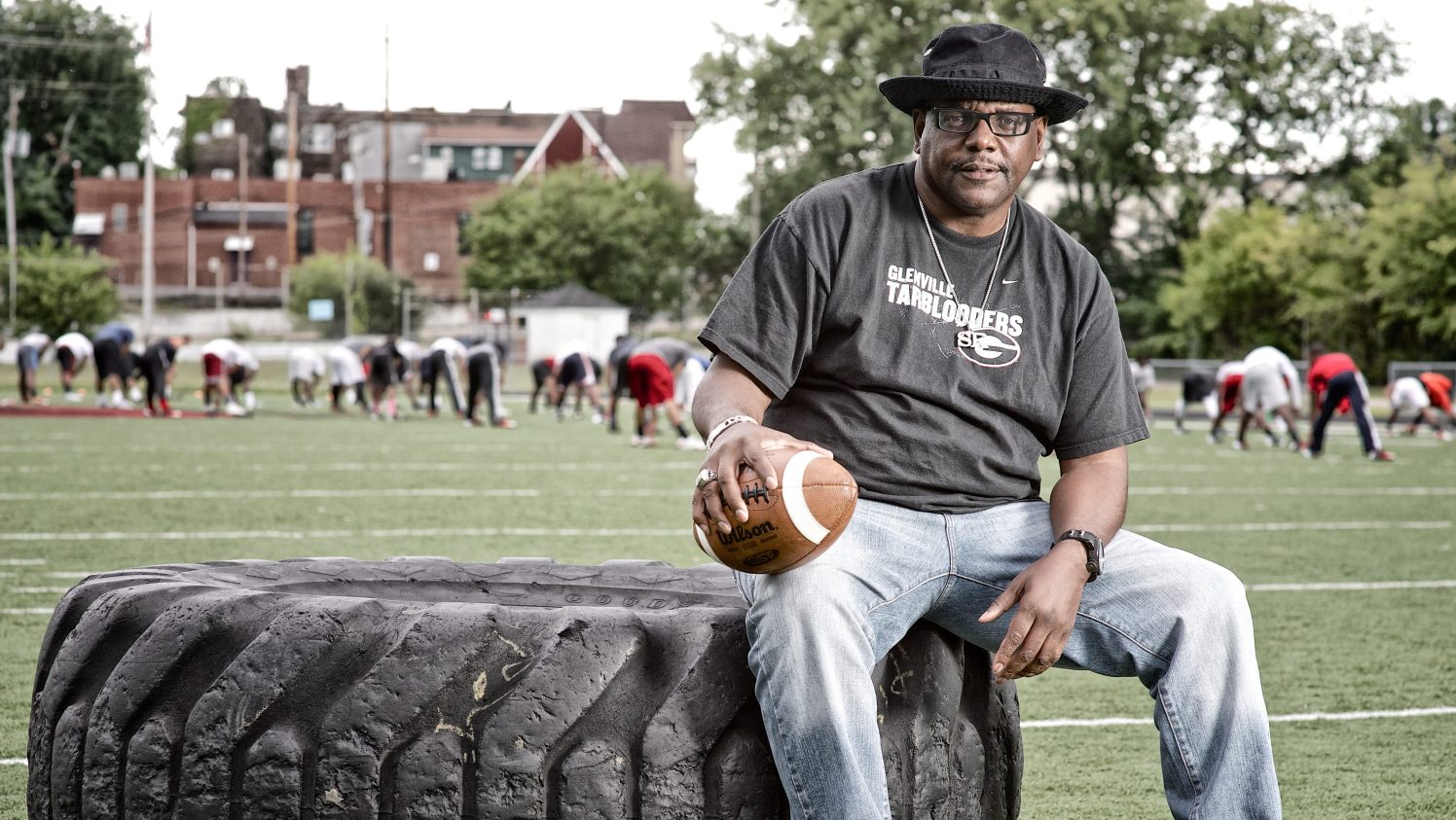 Ted Ginn Sr. and his academy teach pride, loving oneself and giving back to the community

The man on the east side Cleveland football practice field doesn’t look like anyone who might be aligned with the high school football players running their 40-yard practice dashes as the sun starts to dip in the west. He’s dressed in a dark suit, with a bright linen dress shirt and a small dark tie, with dress shoes brightly shining on the recently installed synthetic field.

As he watches the 60 or so players as they finish their 40-yard sprints, Glenville High School football coach Ted Ginn Sr. is not yelling with inspiration or scowling at these young men closing up their Monday workout. He is talking on his cellphone, keeping up with the 400-plus students attending the Cleveland public school he runs, Ginn Academy, and making sure the kids not playing football for him are on the right course toward decent grades and scholarships to colleges by next spring.

And it is that part of the legendary Cleveland football coach that often gets ignored when discussing Ginn’s accomplishments, his leadership academy for young men in Cleveland’s east side African-American community that has not seen the improvement the city’s leadership likes to brag about to national media covering the Republican National Convention and the Cleveland Cavaliers NBA championship this past summer. For Ginn, it is much more practical: get his good football players on scholarship to schools such as Ohio State University, his little players to Division II or III colleges, and the young men at Ginn Academy to accept a scholarship at private colleges that want the students’ ability to get good grades.

What Ginn has been working to do for the past 20 years or so as a head football coach – with the last 10 or so running a separate school concentrating on getting 80 percent of the students college scholarships – has not changed his views, but has better concentrated what he emphasizes. Meaning, what one learned as a 17-year-old either on the football field or within the special school, is essential “to teach them we don’t have time for foolishness, and our goal is to break through from much of the foolishness that society has built into many of their heads,” Ginn said.

After practice this week, senior running back Demerius Goodwin, 17, echoed Ginn’s view that emphasizes hard work and how that translates into improvements after high school football.

“Most of the stuff we learn in playing football for Coach Ginn at Glenville High School is how to be a leader on our time,” Goodwin said after preparing for the state playoffs this week. “We understand more and more that we are responsible for figuring out leadership roles and inspiration for doing those. We realize what we learn in football practice and in school inspired us to improve ourselves and our community.”

The approach to teaching young men is a key to what Ginn does as both a football coach and as a director of Ginn Academy. “Everything I’ve talked about in the past is now in real time and something we have to adjust to,” Ginn said. “Our young people are being taught that everything is in an uproar and is crazy for them. But we have concentrated on dealing with young people from our heart and to help them with their attitude on what comes out of their mouth.

A steady stream of players to Ohio State

What Ginn has done in Cleveland is important in many respects. He was born in Louisiana, moved to Cleveland with his mother when he was 11 and later attended Glenville High School. He worked as a security guard after graduating in 1974, and later volunteered as a football coach at his alma mater starting in 1976. He was appointed head coach in 1997, and his players became known as good scholarship players for the Big Ten. During Ginn’s nearly 20 years as head coach, about 100 players have gone on to play football at Ohio State University.

With nine players currently in the NFL – including his son Ted Ginn Jr. with the Carolina Panthers, Cardale Jones with the Buffalo Bills and Donte Whitner with the Washington Redskins – the Glenville Tarblooders are one of the most successful programs at producing professional football talent. In 2006, Ginn was offered jobs outside of Ohio, including as a football coach in high schools in the Dallas area in Texas.

“I had opportunity to leave Ohio and go to Texas and get paid $100,000 a year coaching football,” Ginn said. “But at the time, with my son and others I coached moving forward to success in college and the NFL, I realized my purpose was to help out young men in Cleveland. I saw these kids as God’s kids, and I learned we had to pick up the pace.”

And it was the challenges he faced that changed him. By staying in Cleveland, he was allowed to open Ginn Academy in 2007. And in 2012, he was close to death after it was discovered that he had pancreatic cancer. “I was sick because of my working in this football business,” Ginn said now as he looks back. “I found out that at times I was sacrificing myself to sports. But I’ve changed somewhat now to where I coach both men and the kids playing and import wisdom and love in what they do.”

Antoin Eley, who played for Ginn at Glenville in the early 1990s and now works in youth support programs for his former coach at Ginn Academy, said that his old coach is now stronger than he ever was. “I could see his heart change in some respects when he decided to stay in Cleveland in the late 2000s and that his heart was a positive way to reach out to young people who had needs,” Eley said.

“Our community is suffering, despite what the leadership in Cleveland says,” Eley said. “But Mr. Ginn knows his key contribution is to give pride and teach people in high school how to have pride and contribute to this city. Some of the leadership in Cleveland ignored the problems in the African-American community in Cleveland, but we know that what we are doing is bigger than football and could have a drastic impact on our people and the neighborhood in which we live.”

Success is about saving lives, not just winning games

For the 61-year-old coach and high school administrator, his purpose seems more obvious than it ever has been. The African-American population in the city knows that the growth in Cleveland has been in whiter neighborhoods and has been hard to find in African-American areas on the city’s east side. Neighborhoods such as Hough, Glenville and Collinwood, where Ginn has concentrated his efforts, all have lost population since 2000, have seen increases in shootings, few business openings and the degeneration of housing stock.

“We are losing many people in these black neighborhoods in Cleveland because there is no investment by the city and business leaders,” Ginn said. “What we are trying to do to inspire those who attend our school and play football for us is to have our students be the examples of hope for others and hope for the rest of the city of Cleveland.

“I have learned over time that both football and our school are both teaching the same thing,” Ginn said. “We teach them to understand the value of life. Things are not moving fast enough for the African-American community on the east side of Cleveland. What we work with is educating our children that they need to try hard to help their families because in so many cases the families they come from are broken and those families need leadership from them after they graduate high school.”

For Ginn, the difference between the destitute African-American neighborhoods in Cleveland and those areas seeing investment is part of the changes Cleveland needs to address. Richey Piiparinen, director of the Center for Population Dynamics at Cleveland State University, brought out such issues in a 2015 Cleveland Magazine article. “A number of quality of life indicators, outcomes in various east side neighborhoods are below that of developing nations,” he wrote.

“According to data by Case Western Reserve University, homicide rates for sections of the city are similarly comparable,” Piiparinen continued. “In 2010, homicide rates in Ward 1, comprising parts of the southeast side, and Ward 9, which entails Glenville, are similar to Guatemala and El Salvador … where the spatial patterns of having and not having mean poverty gets pushed together, not alleviated. When cities [like Cleveland] evolve as separate and unequal, they create a deepening sense of alienation and marginalization.”

With a 7-3 record this year, Ginn’s Glenville High School football team has qualified for the state playoffs that begin this weekend. Glenville travels about two hours west to Toledo to play Anthony Wayne High School on Friday night, and if they win, they will likely be playing future games in the Cleveland area.

Ginn is confident in his players and coaches, and thinks this year will be the one where the school has success, possibly even a state championship (they’ve made the playoffs 12 times in the past 18 seasons).

“I’ve picked up the pace since my pancreas problems, and I had to face it and how it affects my life and the kids we teach,” Ginn said. “I’ve learned it is all about being a servant, and I now know that is about investing in people without looking for anything in return. If you aren’t in this for those reasons, you’re a user.”