Her company, Sweet Blackberry, tells the stories of remarkable but little-known people

Karyn Parsons is a long way from her days playing Hilary Banks on the 1990s hit show The Fresh Prince of Bel-Air. Now she’s developing a well-received series of animated children’s films on black history with celebrity narrators.

She remembers being told stories about Henry “Box” Brown by her mother, so she brought the story to life when she launched her nonprofit Sweet Blackberry in February 2005. The Journey of Henry “Box” Brown was released on DVD and narrated by actress Alfre Woodard.

“He was a proud man, enslaved man, who literally mailed himself to freedom in a box and when the box went across state lines, he was a free man,” Parsons explained. “And I found that was the emphasis for the whole thing. Because I just found that so remarkable. She told me this stuff over the years.”

Both films have aired on HBO and HBO Family, and have garnered several awards, including the Parents’ Choice Award. Other narrators used by Sweet Blackberry include Chris Rock and Misty Copeland.

Parsons shares her journey with The Undefeated.

When did you make the transition from acting to filmmaking?

Well, I guess I dabbled. And even with Sweet Blackberry, it really just came out of trying to get stories to kids. But before that, when Fresh Prince ended in ’96, I went to NYU Film Intensive. … I learned a lot in film school and [have] done a bunch of short films. I don’t think of any of them are really related, because I wasn’t going down a straight career path. I was doing things more out of the desire to do things or to, in this case with Sweet Blackberry, just to get the stories out to kids.

What were your major influences?

I was really little when I decided I wanted to act. I could not get enough of Bette Davis. … I had to see everything that Jodie Foster did. Because she was a kid and she was up there on the big screen and she was on the little screen. I would see her in movies and television and just followed everything that she did. And my style was never anything like her in any way.

My mom kind of started telling me these stories and that was really [who inspired me]. And it took me a few years to realize how much I think James Avery had a huge influence on me. James Avery played my television father, Uncle Phil. And he was a real black history buff. I was just doing it, and as things went on I was realizing, ‘Oh, gosh, this is so James.’ And James really wanted to do a voice, too. You know, he was a voice actor. He did the Shredder on the Teenage Ninja Turtles and had a really recognizable, really great voiceover voice. But he never got to do one. But I think James probably had a big influence on me.

I hated history as a kid. I hated it. Everybody was so intense when they talked about it and serious. So I found it hard to relate to. And one thing I really wanted to do with Blackberry was making something kids could relate to the stories and get into the stories and have a good time. And at the same time you’re learning about a real person. And so I wanted to make sure to try to bring some of that and make it more relatable. Because now I love it.

What cultural values do you see in the storytelling?

There’s so many aspects of it that I think are really valuable and important. Actually, the storytelling itself — learning new stories and repeating them and giving them and passing them on and on — is very important and vital. The textbooks only tell us so much. We learn about incredible people in school, but only about a handful. And it’s starting to get a little wider.

Even though they’re incredible stories … when we’re only told a handful of them, I think the message that everyone receives whether you’re a black kid or any kid is that once in a while a special black person comes along and does something great. And that’s what you end up getting from that. … But that it’s just a special, selective few once in a while, which is so insanely far from the truth.

Black people are a very intricate part of the fabric of this country. And I think we’ve changed the history so much and told the story differently and tried to gloss over things that weren’t pretty. So, I think we don’t discuss this. And it has a really deep effect on all of us. And it starts when we’re kids. Kids get the message very, very, very early that they’re not necessarily capable of anything great. And black kids in particular.

What’s been the hardest part of this project?

Well, I think a lot of people are excited and want to support it. We’ve received so much support and so much love over the years and [we] did a Kickstarter campaign a couple years ago and the outpouring was fantastic. And everyone’s very enthusiastic and on board with what we’re doing in the mission. But it’s still a nonprofit organization and so we come up against, I think, the same kind of hurdles a lot of nonprofits do. They forget that you can’t do it if you don’t get support. If you don’t get financial support or if you have people volunteering to help.

Where would you like to see your storytelling go?

Oh, I’ve got so many things. I just want to tell these stories to kids and, of course, now I have two children of my own and so my whole vantage point is different. And I’ve come so far with this and I’ve learned so much and spoken to so many kids and the educators and the press. I just love the idea of bringing learning to kids in a really organic way to whatever they’re doing. In this case, we’re doing it through these films, but I have plans for other ways of introducing it.

How do your children feel about the series? Do they give you any feedback?

We did our last film, the story of Janet Collins, the first black prima ballerina. When I finished writing it, I wanted to read it out loud and hear how it sounded and the way the pace would be. My son just happened to come over and he sat on my lap.

So, I thought, OK, I’m going to just give this a go. And so I sat with him and I just started telling the story. I thought he’d get up and kind of wander off because he just came over and sat. He sat there through the whole thing and listened to the whole thing. At the end, he’s like, ‘I like that.’ 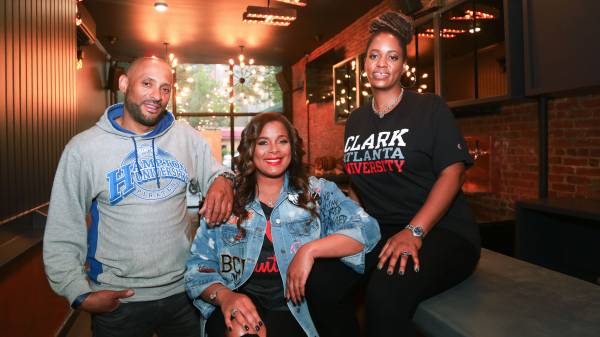 I was so happy. I didn’t go to him and try to solicit some kind of response. And I got it! I got the one I wanted! It went really well, so that was great.

Our next story is a story of Bessie Coleman, who’s the first black female aviator. An incredible story of a woman who was so far ahead of her time — really inspiring story.