From founder to friend: How Paul Brock connected generations through the National Association of Black Journalists

As the saying goes, you can tell more about a man not by what he does, but by what he gives. This week we lost a man who gave many of us a lot, National Association of Black Journalists (NABJ) founding executive director Paul H. Brock.

Brock is among the people credited with bringing together 44 men and women in 1975 to create the organization that now serves more than 3,000 members. His career of nearly 70 years included stops in radio and communications. As a former journalist who spent much of his career in political communications, Brock still saw the need for an organization that supported Black journalists.

I cannot recall precisely the first time I met Brock; it must have been sometime in 2007. I worked on Capitol Hill and was a new NABJ board member. We clicked quickly. Our bond was over our love of all things politics, our beloved alma mater Howard University and, of course, all things media. We also both loved spicy Thai food and our long lunches over good conversation partaking in it. Sometimes an adult beverage would be indulged in. Yuengling, to be exact, was one of our favorites.

None of the many interests that we shared was more significant than our love for the organization that he helped found. It was easy to look up, and hours could have gone by sitting at his feet listening to him discuss the organization’s history. He always had some old paperwork or memento he could share, and of course, as an NABJ OG, his NABJ swag game was on point and endless. From his throwback convention bags, NABJ leather jacket or his NABJ playing cards and cups and mugs, it was always a treat to see his unique NABJ paraphernalia.

I will miss being a part of the convention programming founder Brock would think up for NABJ. He would always start early, sometimes almost a year in advance, on his next big idea. He would call and relay his game plan and gladly let you know what part you could play to bring it to fruition. From NABJ Hall of Fame ceremonies, convention events such as the annual Founders Reception, and many NABJ workshops, it was an honor to work with him on all of them. In looking back through our old correspondence, I had to smile when he brought some of the Tuskegee Airmen to NABJ in association with the 2012 film Red Tails. He also was focused on bringing the film’s stars, Cuba Gooding Jr. and Terrence Howard, which he did. There was nothing he could not do when he put his mind to it.

It was never lost on me that I met founder Brock in his latter years and that 47 years separated us, but I was happy to call him a true friend. Among the many impressive things about founder Brock: There isn’t a single hat he hasn’t worn. Journalist. Media professional. Filmmaker. Executive director. Scriptwriter. Fundraiser. Founder. He was never at a loss to tell a story about these experiences with a laugh that could fill the entire room. 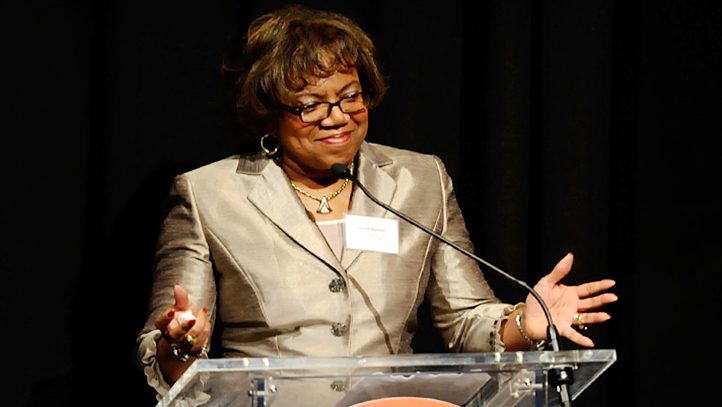 His background gave him the widest circle of people from all walks of life. And I was fortunate to be included in that number. Living relatively close to founder Brock in Prince George’s County, Maryland, landed me invites for lunches, dinners, church services and parties during which I had the opportunity to meet his eclectic circle. His annual Christmas parties were legendary, from much-admired media personalities to local elected officials; all would come and look forward to a great party thrown by Brock and his wife Genia. There was always great food and drink and games. Founder Brock loved bid whist and pinochle. When my mother was in town, he would say, “Bring her too.” She also grew to love founder Brock. Teasing her once, he said, “thank you for letting me borrow your baby girl.”

In a 2003 interview with the HistoryMakers oral history collection, founder Brock was asked how he would like to be remembered. He said, “I would like to be remembered as a person who tried, who was unafraid to face those challenges that were threatening us as a community, as a group, as a culture, and that I did my damnedest – my very, very best to help those in my community, in my culture, to be better, better prepared and better individuals.”

And Brock most certainly has done that. Well done.

My biggest lessons learned from getting to know this incredible man are always fighting for what you believe in, never to stop pushing and that age is nothing but merely a number.

NABJ conventions won’t be the same without his presence. While this week is sad to have lost this great man, it is also a celebration of an extraordinary life. I thank him for the legacy he left and all that he has given us. An organization that advances the industry and advocates for Black journalists and media professionals, a mission needed now more than ever.

Rest in power, Paul Brock. You will be dearly missed.

Aprill O. Turner is a public relations strategist with deep roots in politics. She is currently vice president of communications and external affairs for Higher Heights For America, the political home for Black women. She also teaches public relations courses at Montgomery College in Maryland and Trinity Washington University in Washington, DC.